Antarctic cruising season begins in late October and runs until March each year. These southern summer months offer ideal cruising conditions in what is perhaps the world’s most inhospitable place. The weather in Antarctica is always unpredictable, but alongside daytime temps that usually go above a very pleasant 0-degree C, it’s only during these months that you can benefit from an impressive amount of daylight. On December 21st, Antarctica enjoys its ethereal mid-summer, the one day of the year when the sun doesn’t set at all. Explore Antarctica by expedition ship around this time, and your chances for extensive wildlife-watching and landscape admiring are the best they could be.

Although December and January are the most popular months to visit Antarctica, this has much to do with the coinciding Christmas holiday period. Antarctica dishes up wicked highlights during every month of cruising season, so choosing the ‘right time’ for an Antarctic expedition mostly comes down to personal preferences. It’s also worth noting that distinct experiences can be enjoyed depending on where in Antarctica you sail, be it the eastern side (as on Antarctica expeditions departing New Zealand/Australia) or the western side (expeditions departing Ushuaia, Argentina) and extended cruises which visit the Falklands and South Georgia islands as well.

Here are just some of the amazing highlights you can look forward to on your Antarctica trip, month by month. 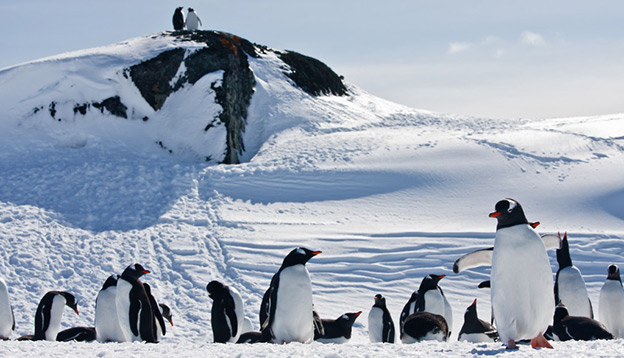 Cruising to Antarctica at the very start of the season is quite spectacular. Given you’ll be among the first to set foot on the white continent, you’ll find landing sites pristine as can be. By the end of the season, the most popular landing beaches can get a little mucky, both with countless tourist footsteps and a truly crazy amount of animal droppings so getting here ahead of the pack is a genius way to soak up the splendour of Antarctica.

Did you know that Antarctic wildlife is somewhat supersized?! Read here to find out why!

If seeing dramatic ice formations is your absolute priority, then November’s definitely the month in which you should visit. Total seasonal ice-melt won’t be occurring for a while so those ethereal blue icebergs will still be floating big and strong. If you’re lucky enough, you may also witness the first major iceberg calvings of the year, always a breathtaking event. The sun will still lightly set at this time of year, making for outstanding midnight photography. Early season cruising is also ideal if you want to cross-country ski or join a snowshoe expedition, as snow-cover will be at its best at the start of the cruising season. If you want to kayak, however, you may want to book your Antarctic expedition for the very end of November as the activity won’t be offered until the ice recedes a little more.

On the wild side of life, you’ll find Gentoo, Chinstrap and Adelie penguins at their friskiest this time of year, and you may just be privy to some of the most endearing courtship rituals in the animal kingdom. Dressed in their Sunday best (as always) suave male penguins strut their stuff, singing and bowing their heads in a most impressive manner. From mid-November to early December, the matched-up penguins will begin building their nest in earnest, oftentimes stealing rocks from one another to make their job a little easier.

If you’re heading to the Falklands and South Georgia, you’ll see wildflowers in full bloom in the former, and less energetic behaviours form King Penguins in the latter. King Penguins usually lay their eggs by early November and are carefully nesting them underneath their thick feathery bellies. Babies won’t hatch until the very end of the month. You’ll see packs of elephant and fur seals starting to mark their breeding territories in the sub-Antarctic islands.

The start of the season is also a fantastic time to choose Antarctic expeditions which visit one of the research stations set up in Antarctica. The hardy folks who’ve spent the entire winter on their own here always welcome tourists with unbridled enthusiasm 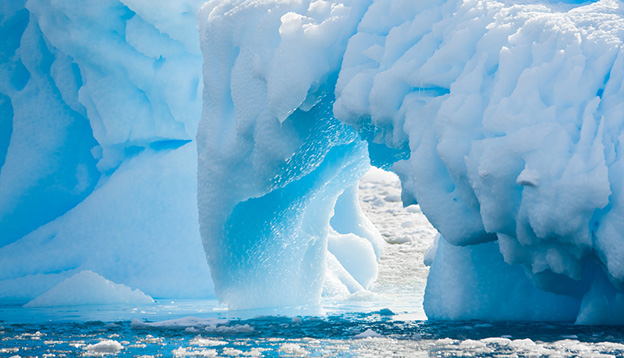 December is arguably the month where Antarctica is at its most enchanting best. Summer’s in full swing and days here can be bright and sunny, yet still cold and crisp. Visit Antarctica in December, and you can expect to see soaring albatrosses and lazy leopard seals basking in endless hours of daylight. With 20-odd hours of sunlight every day (and 24 on the 21st), the Antarctic world is your oyster and the opportunity for more frequent landings is higher. You’ll see smaller icebergs now but a much greater collection of ice floes, many of which are taken up by sunbathing seals.

Mid-season cruising in Antarctica is a great choice if you’re worried about cruising the open seas. Statistically, this month brings about the calmest seas this far south and, although a calm crossing of the Drake Passage is never a guarantee, chances are higher if you cruise in December.

Whales are starting to arrive en masse in Antarctica and, if you haven’t spotted any on your crossing of the Drake, chances are very good that you will do so once you arrive.  Temps are reaching a positively balmy 4-degree-C by the end of December as Antarctica enters its warmest month of the year. 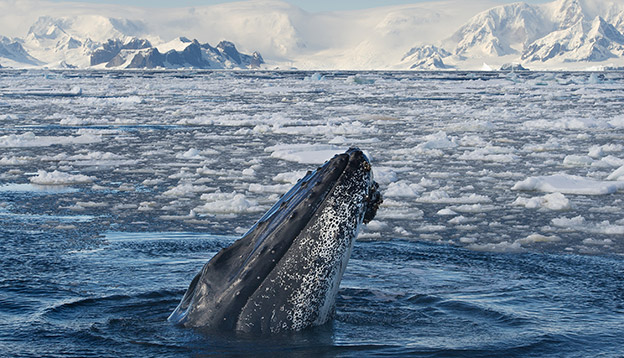 The warmest period of the year continues in Antarctica, and you may spot numerous penguin chicks hatching or newly hatched and adorably fluffy! You may also be privy to seeing baby seals waddling about and may experience a greater number of whale sightings as they begin to congregate in larger pods.

With warmer temperatures, the ice begins to recede, and zodiac excursions can now be taken to explore outlying icebergs which are by now rapidly changing in shape, colour and size. As January is part of the high tourist season, booking early is absolutely essential!

Being the warmest month of the year and the one that sees the greatest ice melt, January also marks the start of Antarctic expeditions that cross the Antarctic Circle as well as those which make the longest journey of all, departing from New Zealand/Australia. 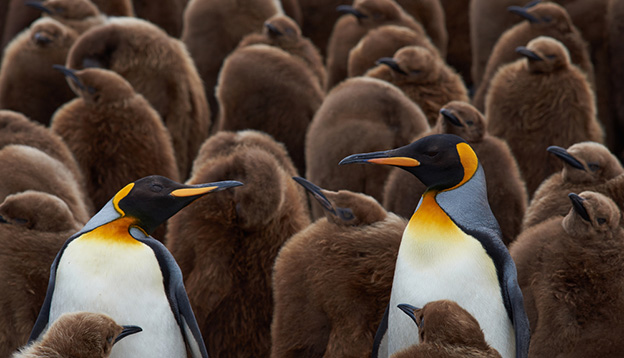 Whale spotting reaches its absolute peak this month and cruises are simply exceptional in this regard, many spotting minke, orcas and humpbacks in much greater numbers. They tend to ‘group up’ at the end of the season as if to organise a route for their long voyage north, so they’re more easily spotted in a few renowned coves. On the peninsula, there are now more fur seals than at any other time of year and elephant seals, ready to moult, start populating the shores.

The skies on occasion can be crystal clear and the shorter days make for exceptional photography, the starkness and richness in colours towards the end of cruising season being among the most spectacular of all.

February is the busiest month for Antarctic cruises departing from Australia/New Zealand, as they usually take about a week to reach Eastern Antarctica. Given that this side of the continent is colder than the western side, you’ll still gargantuan icebergs and large colonies of penguins. 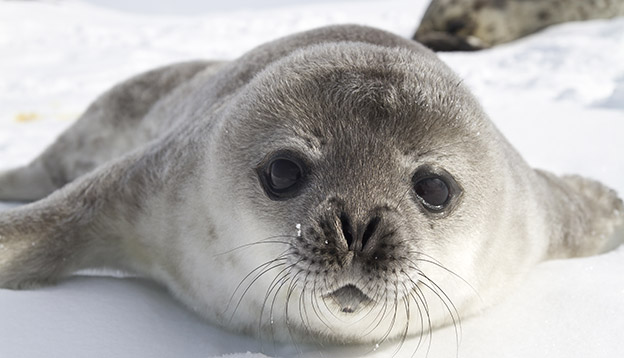 As the ice recedes, you’ll be able to explore further south, with the most successful Antarctic Circle expeditions heading south this month. You’d imagine the last month of the cruising season to be ‘the calm after the storm’ as far as wildlife sightings are concerned but, in fact, it can be a last-minute-frenzy of activity. Whales are still very much present here and, as our yearly climate postpones winter, each year, whales tend to stay around in Antarctica for longer. Make sure to include South Georgia on your itinerary if travelling to Antarctica in March, as penguin rookeries will be at bursting point right about now, with adolescents exploring their surroundings and taking to the water for the very first time.

Antarctica cruising at the end of the season offers sensational sunsets, awesome night-time sky gazing and some of the best value-for-money expeditions of all. The temperature starts to drop below zero, which entices many of the migrating birds to head north. The landscape will still be magnificent; however, the wildlife plentiful and the overall experience as rewarding as ever. 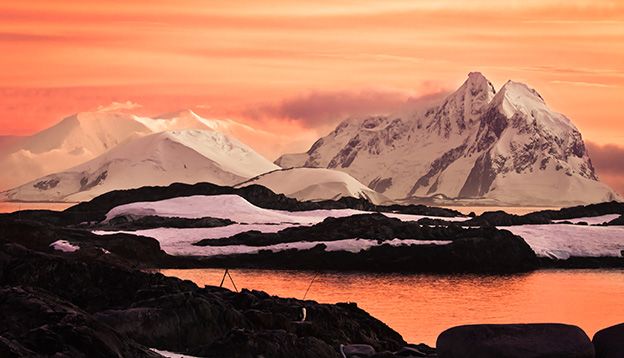 Antarctica from April to October

As autumn and winter descend upon Antarctica, the world’s most awe-inspiring continent slowly descends into a dark, windy and freezing existence. Temps can drop to -60 degree Celsius and nights can seemingly last forever. As waters start to freeze over, packed ice covers the entire periphery of the peninsula for up to 600km, rendering this location inaccessible for tourists.

A last word to the wise – Nature is, by its very essence, wholly unpredictable and our month-by-month guide to Antarctica highlights is a general overview of the most common occurrences on any given month. This does not mean that you won’t see whales outside of February, or courting penguins in December, or wildflowers on the Falklands in October. The sheer unpredictability of Antarctica is one of its most endearing aspects and considering the alarming rate at which Antarctica is warming, wildlife events have become even more unpredictable.

Interested in the effects global warming is having in Antarctica? Read this interesting article on the side-effects that warming temps are having on Antarctica’s whale population.

Ready to come and discover the amazing surprises in store in Antarctica? Then we’ll tell you that the very best Antarctica expedition of the year is the one you can join.

See our extensive range of Antarctica Cruises and contact us to know more.

For further inspiration, please head to our Antarctica Travel Guide to find all you need to know about travelling to this bucket-list destination.

Or check out some of our blog recommendations:

Highlights of an Antarctic Circle Expedition