Soccer legend Diego Maradona is one of the most famous and controversial South American sportspeople to have gained international fame. He’ll be forever etched in history as much for his football skills as for the drug abuse, arrogance and violent outbursts which accompanied him for much of his career. As an unrivalled Argentinian icon, Maradona led the country during its World Cup victory in 1986 after which he gained an almost god-like following in his home-country. Throughout his career, Diego Maradona won a multitude of accolades. From the Golden Boot, the Golden Goal, the Goal of the Century – an awe-inspiring dribble which saw him cross half the field and pass no less than 5 English players – to Player of the Year and Player of the Decade, and the one who consistently scored the most goals. Maradona was one of very few players who managed to get a standing ovation and applause even by fans of opposing teams. Unthinkable when one thinks about how contentious football is, most especially in South America, such a passionate part of the world. 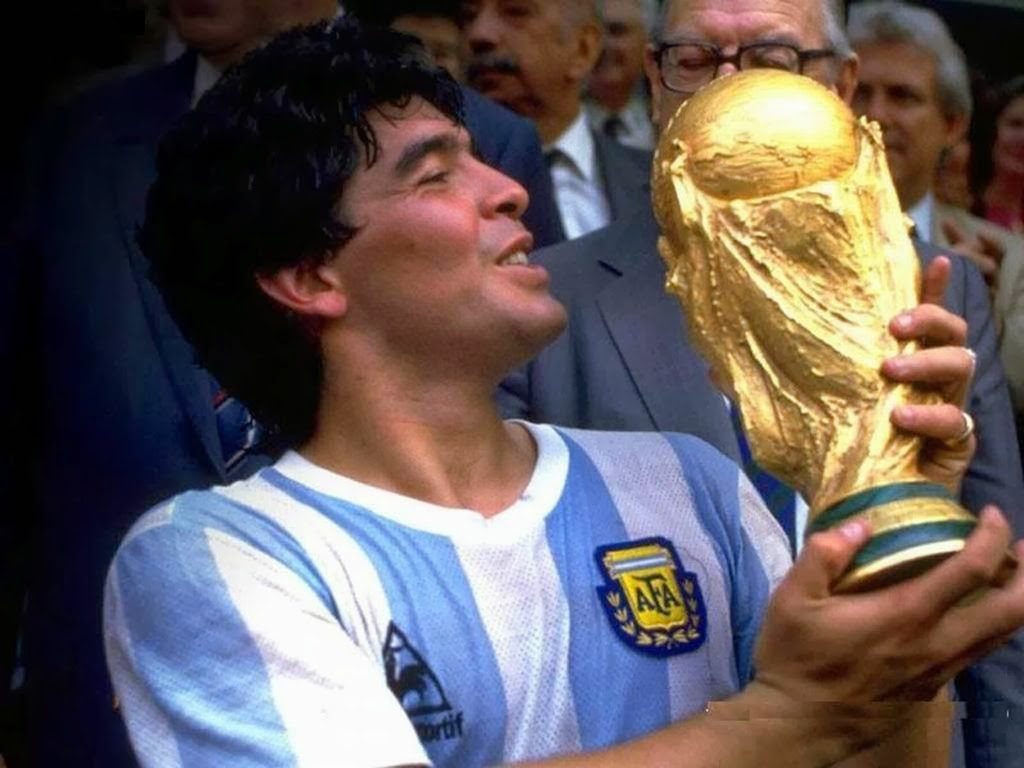 Small in stature, with a full head of crazy curls and a stocky body, he was adored across all continents. His football skills were outstanding, earning him a place in the top 3 world’s greatest players who ever lived, alongside renowned Pele and, in more recent times, fellow Argentinian Lionel Messi. Even if you’re not a fan of the game, you simply can’t help but be overawed at Maradona’s speed and skills. They say practice and perseverance equate to 80% of one’s success, but if there is even just one thing which screams in favour of inherent talent, it would have to be Maradona’s football skills. His reflexes, dribbling and passing precision were phenomenal.

Diego Armando Maradona played seasonal football in Italy and Spain, and international matches for his beloved Argentina. There was something about Maradona which set him apart from all other famous players. His humble beginnings and his astronomical rise from poverty and into football royalty saw him idolized by football-obsessed children. He represented raw talent, some would say ‘out of this world’ talent, and the idea that perhaps this is enough to make it in life. Whatever the case may be, Diego Maradona was, and in many ways still is, Argentina’s most beloved sporting icon.

From humble beginnings to football superstardom 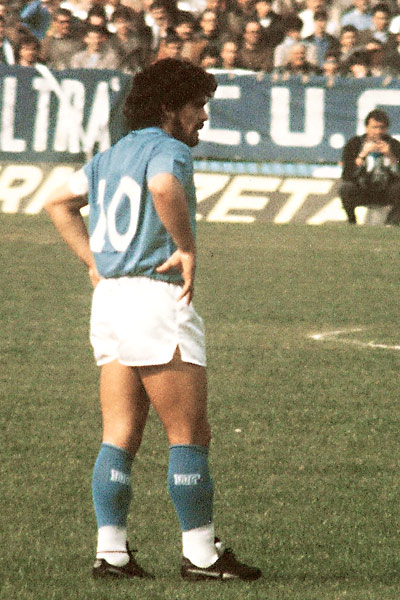 Born into a large and loving but poor family in 1960, Diego Maradona grew up in Villa Fiorito, a relatively violent ‘slum’ on the outskirts of Buenos Aires. Life in Villa Fiorito was, and still is, exceptionally difficult. For many, football represents a glimmer of shining colour in an otherwise dreary-coloured world. A life of sacrifices, of boredom, of unemployment and hardship. The Sunday football game becomes the highlight of the week. A tournament won by your team becomes a personal achievement, something of which you can finally be proud. For the greater majority of young people leaving on the fringe of society football is considered the only escape and even when the odds are ridiculously stacked against them, the dream to become an international football star and enjoy a better life is ever-present. For Maradona, the dream certainly came true. In Villa Fiorito, Maradona still epitomizes that promise. He was given a gift by God, locals reason, and he and his family crawled out of poverty and out of the streets of the slum in which they were born. For outsiders, it is nearly impossible to understand the kind of reverence Maradona’s fame and fortune elicited. Because it is so much more than just about football. 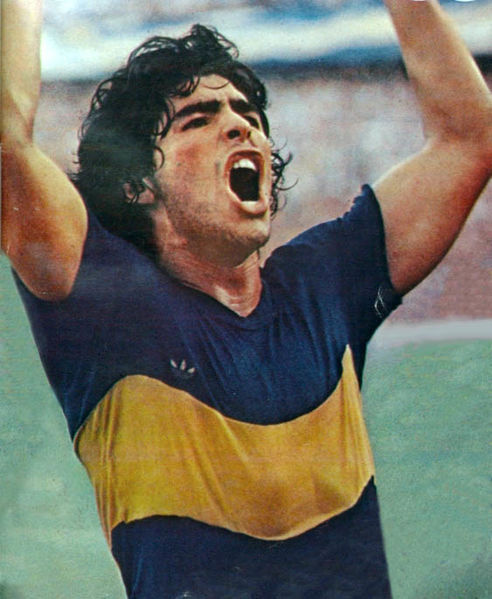 Maradona during his debut match with Boca Juniors, IN 1981. Photo credit: wikipedia

Diego Maradona showed immense promise very early in life. He received his first football on his 3rd birthday and joined Argentino Juniors at just 10 years of age. By the time he was 16, he’d turned professional. Lovingly nicknamed the Golden Boy (el pibe de oro), a moniker which never really abandoned him, Maradona played in Spain throughout much of the 1980s yet trouble, for Maradona, was quite the constant companion. He had a bad temper and aggressive tendencies and was often involved in on-pitch fights. The most memorable occurred during the Copa del Rey final in 1984. It had followed two tumultuous years of Maradona playing in Barcelona and was preceded by an insane amount of banter and threats with rival Madrid. At the final whistle, an all-out brawl erupted, with Maradona being the main protagonist, and delivering a bevy of crazy karate-kicks. All of it in front of the Spanish King and tens of thousands of spectators.

You can read more about Maradona’s crazy moments here. 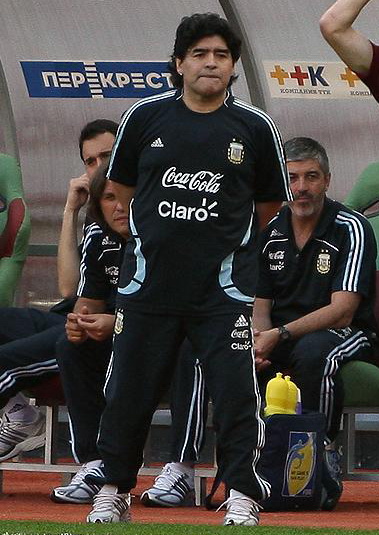 Maradona as coach of Argentina, in 2009. Photo credit: wikipedia

During the pinnacle of his career, when he led Argentina to its 3-2 FIFA World Cup win over West Germany in 1986, Diego Maradona was playing for Naples, a southern Italian city which had neither football fame nor glory. Although the Spanish were happy to finally be rid of him, the Italians were immensely overjoyed. Naples won its first A-series Italian Championship in 1987, the first southern Italian team to ever do so. If there was a group of football fans who truly, madly and deeply adored Maradona more than the Argentinians, it was definitely the Neapolitans. Yet although he brought Naples the fame and fortune it had been dreaming, Maradona’s stint in Italy was also plagued by trouble. He was caught with cocaine in his system and banned, he was fined by his club for missing practice and allegations abounded about links with the Camorra. During the 1994 World Cup, Diego Maradona failed a drug test and was sent packing, on what became the end of his dazzling albeit very tumultuous career.

Maradona was plagued by health problems for many years after retirement. After he moved back to Argentina he was hounded by the media, was hospitalized twice for heart problems and underwent gastric bypass surgery in an attempt to curb his creeping obesity. As of just a few years ago, Maradona was still pursued by the Italian Government for owing tens of thousands of Euros in unpaid taxes.

Love him or loathe him, there is no denying that, on the football pitch, Maradona had no rivals. At his best he was simply unstoppable and, at his worse, he was forgivable. At least, that’s what many Argentinians still believe. Despite everything, Maradona still remains Argentina’s most beloved icon. A man who rose from the ashes of the country’s misery, at a time of great social injustices and hardship, to capture the imagination and heart of the world, with just a kick of the ball. And thirty years after his most glorious achievement, that’s something no Argentinian will ever forget. 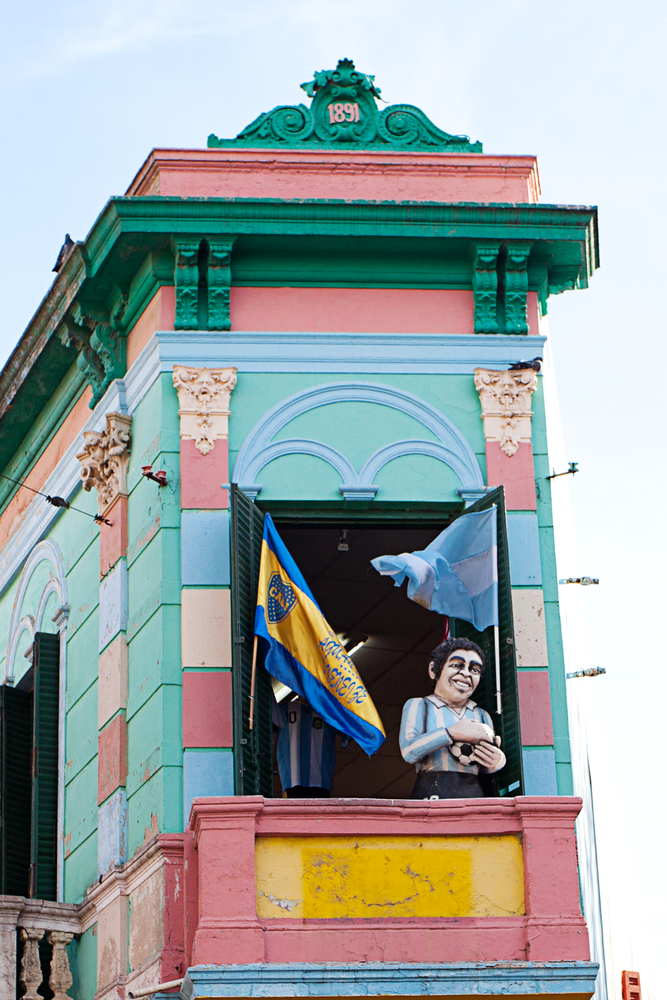 It probably wouldn’t surprise you to learn that Diego Maradona tours in Buenos Aires are incredibly popular. You can visit the Boca Juniors Stadium where he debuted, as well as the Argentinos Stadium and places of great personal and professional significance for the city’s most beloved ‘son’. Not just for football fans, the phenomenon that is Diego Maradona, and football in general, are an inherent part of Argentinian culture and fascinating to learn.

We offer fantastic tours of Buenos Aires – from foodie lover’s weekends to family trips – and plenty of unforgettable tours throughout Argentina. So let us know, and we can include a Diego Maradona tour to your itinerary. At Chimu Adventures we offer a wide range of tailor-made travel options to South America. Click here for more information about Chimu.