Landlocked and surrounded by much more prominent countries, Paraguay is a far-too-easily overlooked South America destination, something we’ve been itching to change. Whilst the country may not boast any world-famous attractions (except for a stellar access to Iguazu Falls) there’s actually a lot this small unassuming nation can offer the discerning traveller looking for something else. Something more. With a long-held heritage dating back to the earliest missionaries and a wealth of stunning rural landscapes and rich indigenous culture, not to mention the fact it isn’t besieged by tourists, Paraguay dishes up some of the most genuine South American experiences of all. Authentic, unpretentious and off the beaten trail, this is the country you come to see once you’ve conquered the Big Five, put your mind at ease, and are now ready to see the ‘real’ South America.

Known locally as ‘the heart of America’, Paraguay shares a very strategic border with Argentina and Brazil (right where Iguazu Falls plummets) and this is primarily what makes it such an easy add-on to any itinerary through the continent.

The country suffered through oppressive dictatorships for most of the 20th century, finally regaining some freedoms and a chance to improve its economy after Alfredo Stroessner was finally ousted in 1989. Yet in the last few decades, the country has been plagued by widespread corruption at the highest levels, as well as economic instability, resulting in over 40% of the population living in poverty. Something they do with an impressive dose of determination and pride. Losing access to Iguazu Falls was one of the most tragic events in Paraguay’s history and there’s simply no way of knowing how much the hypothetical tourism flow would have affected the nation.

Paraguay’s awful history continues to impede its evolution into what it should be: a thriving, (albeit small) economy, although much-needed land reforms, to aid the agricultural industry, continue to be elusive. Irrespective of how GP is managed, Paraguay is one of the leading growers of soya beans, beef, wheat and corn in the world, and one of the largest producer of stevia, the natural sweetener.

Most of Paraguay’s population is concentrated on the southern half of the country (where you’ll find Asuncion, the capital, whilst the wild arid plains of the north (the Chaco province) are still inhabited by indigenous tribes who have shunned modernity. They are among the most threatened Indian tribes in the whole continent.

Culturally, Paraguay is one of the most traditional in South America and one of only a handful who claim the local indigenous language (in this case, Guarani) as their official language, preceding Spanish. Boasting the most homogenous population of any country in South America, Paraguay is made up almost entirely of mestizos, descendants of children of Spanish men and local Guarani women.

In the region, Paraguay is famous for producing some of the finest lace in the world, as well as intricate silver jewellery and colourful ceramics.

Explore Asuncion – Paraguay’s capital is certainly not the most awe-inspiring in South America but its historic centre brimming with crumbling colonial architecture is incredibly appealing, arguably because it isn’t perfectly preserved. Authentic and historic, this mid-16th-century city conveniently offers its best attractions over a small area, easily explores on foot. Notable landmarks in town are the impressive Pantheon of the Heroes and the much more subdued House of Independence. 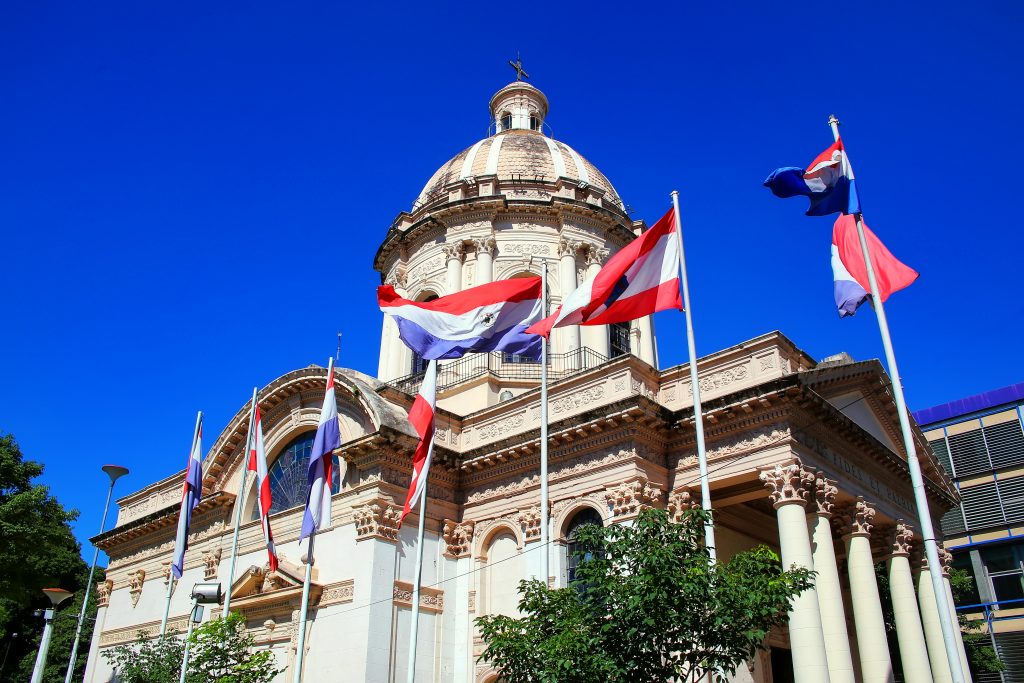 National Pantheon of the Heroes in Asuncion, Paraguay. Credit: Shutterstock

Visit the Trinidad Jesuit ruins – Arguably the prime reason you should visit Paraguay if you’re a history buff, the UNESCO-listed Trinidad Jesuit missionary sites date back to the turn of the 18th century and, despite being used in the filming of Robert de Niro’s haunting film The Mission, back in 1986, have always remained somewhat anonymous. It is, in fact, considered one of the least visited and lesser-known UNESCO sites in the world. The Trinidad Jesuit site is one of many relics left behind by missionaries who strived to provide assistance to hapless indigenous locals oppressed by colonial invaders, whilst throwing in a side-serve of Christian preaching to be on the safe side. Missionary villages like these did help the indigenous inhabitants nevertheless. Two sites, within a few km of one another, are found in the southern border (with Brazil), about 400km south of Asuncion, or 245km from Ciudad del Este. Do some research before you head here, however, as the site offers little in terms of context and details. FYI: The Mission is a must-see film if visiting Paraguay or, indeed, South America in general. 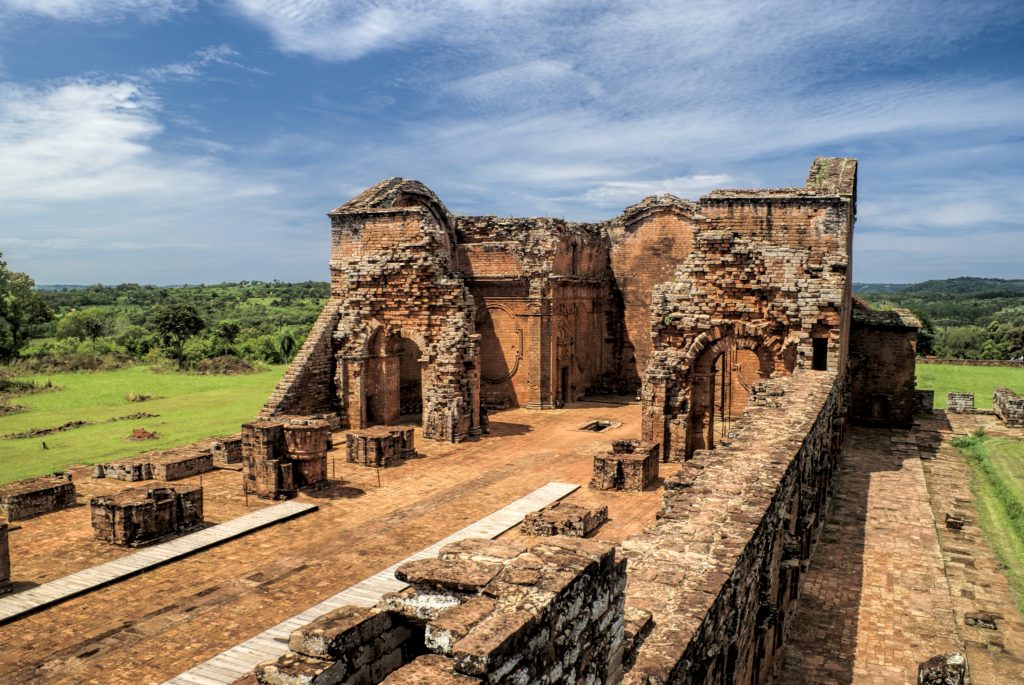 Ciudad del Este – Not the most noteworthy highlight in Paraguay, Ciudad del Este may actually still be the only place you’ve heard of. Famous for offering duty-free good to shopaholic Brazilians and Argentinians (not to mention tourists) the city of the east is a popular entry point from Iguazu Falls. 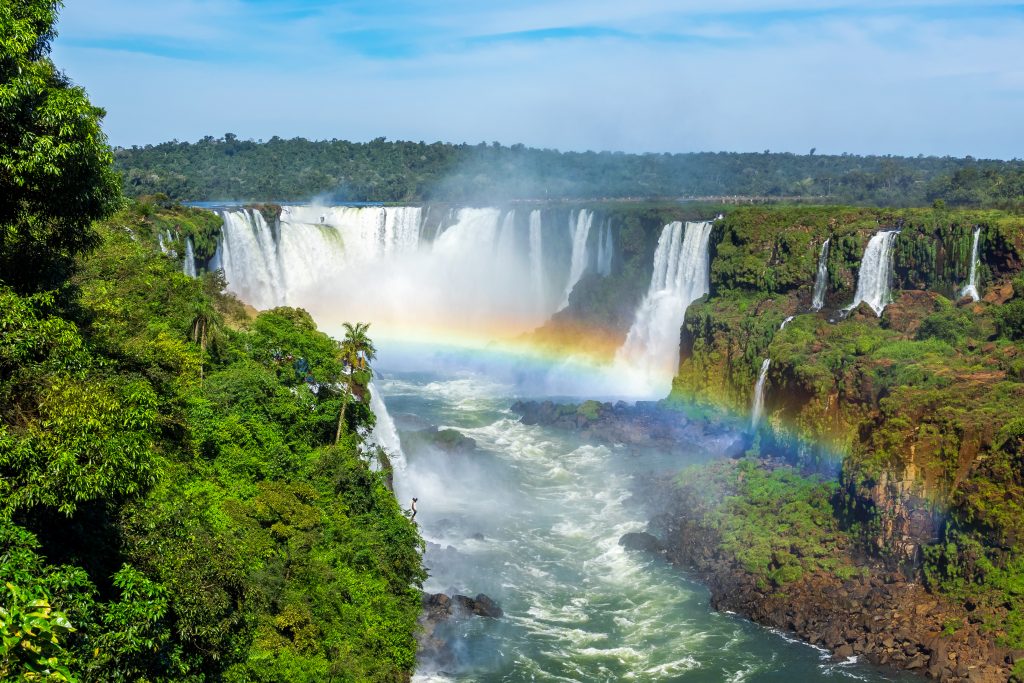 Iguazu Falls, on the border of Brazil, Argentina, and Paraguay. Credit: Shutterstock

Spend Days Exploring the National Parks – Paraguay’s impressive cache of flora and fauna is concentrated in the country’ s 10 national parks and over 40 protected wildlife reserves. An impressive number, given the country’s diminutive size. Want an adrenalin rush? Head south of Asuncion and visit Mbatovi Eco-Reserve and you’ll find a great bunch of people who’ll strap you up and throw you, at breakneck speed, on a zipline along the jungle’s canopy. Doesn’t that sound fun?? 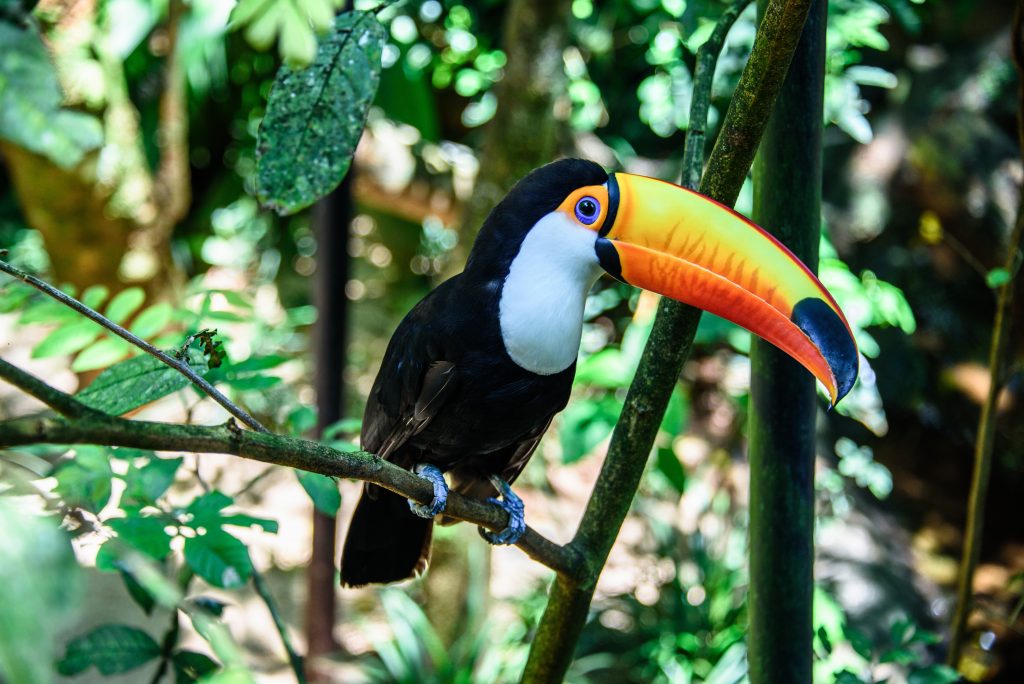 The Toco Toucan sitting on the branch in Iguacu National Park of the Iguazu Falls, Brazil. Credit: Shutterstock

Stay in an estancia – For a much more sedate experience, why not book a stay in a traditional estancia instead? The mountainous Estancia Aventura offers idyllic stays with abundant cultural experiences, activities and great food. Channel your inner gaucho on a thrilling horse ride, fishing by the lake and swim and sunbake by the glorious pool, immersed in a beautiful rural setting. A peaceful retreat and a good dose of Paraguayan hospitality.

Admire the Craftsmanship – From embroidery to leather, clay, wood and cotton, Paraguay’s best markets offer fantastic souvenir shopping of treasures that don’t look like they’re only made as touristy gimmicks. Beautiful, hand-made and local, the best artefacts and crafts you can buy are a testament to the country’s world-class craftsmanship. 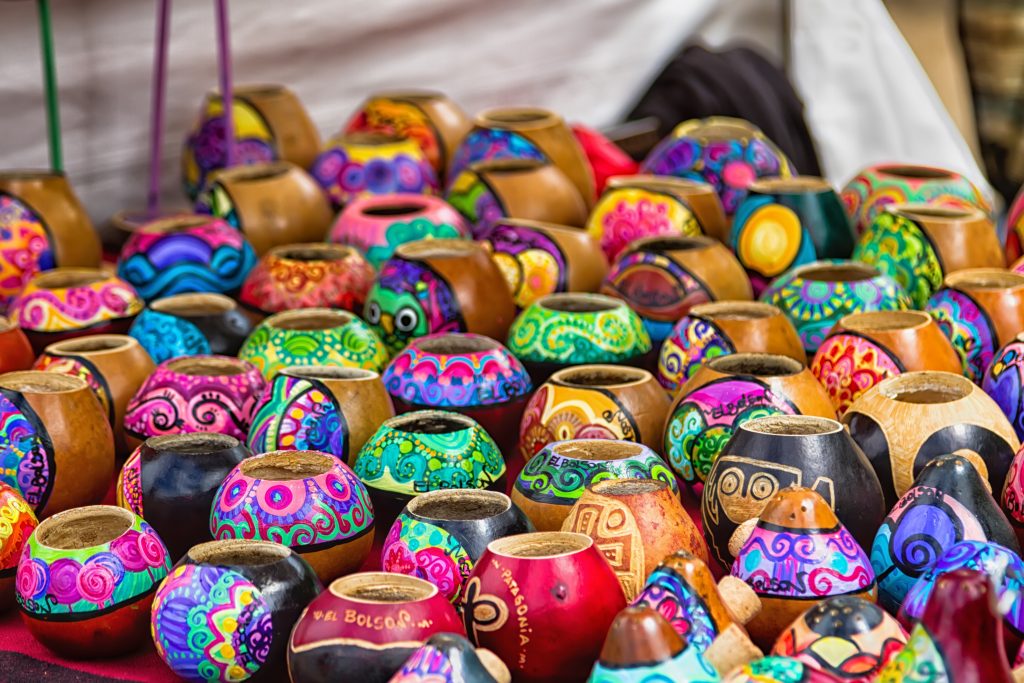 Indulge in the Cuisine – Perhaps the most diverse (and underrated) cuisine in South America, Paraguay offers specialities not found anywhere else. Sopa Paraguaya, a type of cornbread made with mountains of caramelized onions and cheese, is one of the continent’s most delicious treats and one many foreigners never discover. Mad for meat BBQ, yerba mate and cassava (the latter used to make pastry for local versions of meat-filled empanadas and tortillas), Paraguayans love their food to be tasty but not spicy. 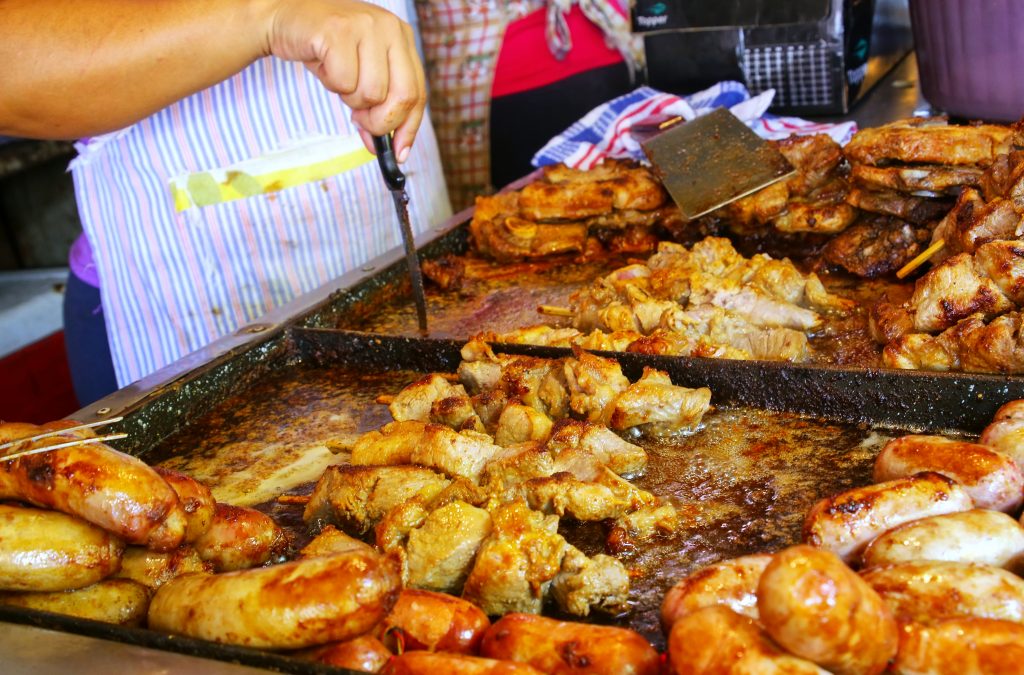 Meat is being cooked for asado at Mercado Cuatro in Asuncion, Paraguay. Asado is a traditional dish in Paraguay and usually consists of beef alongside various other meats, which are cooked on a grill. Credit: Shutterstock.

Hot for most of the year, Paraguay suffers extreme heat in the summer months (Nov to Feb) so plan to visit between May and October instead. Having said that, you will likely be planning your travels around other destinations so it matters not: whatever time you have to discover Paraguay, at whatever time of year, you’ll find the climate more than pleasant.

Asuncion is best reached via flights from any and all South American capitals, particularly Buenos Aires, Rio, Lima and La Paz. The country is more typically reached overland, via Iguazu Falls through to Ciudad del Este.

Fancy including a few days in Paraguay on your next jaunt to South America? Come discover this incredible hidden secret and make your adventure a comprehensive and thoroughly rewarding one. Paraguay’s very central location means that although you may not travel to South America specifically to explore it, doing so isn’t difficult at all, especially when planning a multi-country tour of South America. Visit our Uruguay & Paraguay tour page and ask us how we can plan a bespoke itinerary and guide you to all the major highlights of the country.