In what has been hailed ‘one of the most pivotal archaeological discoveries in modern times’, archaeologists in Peru reveal they have uncovered possibly the world’s largest human sacrifice site. 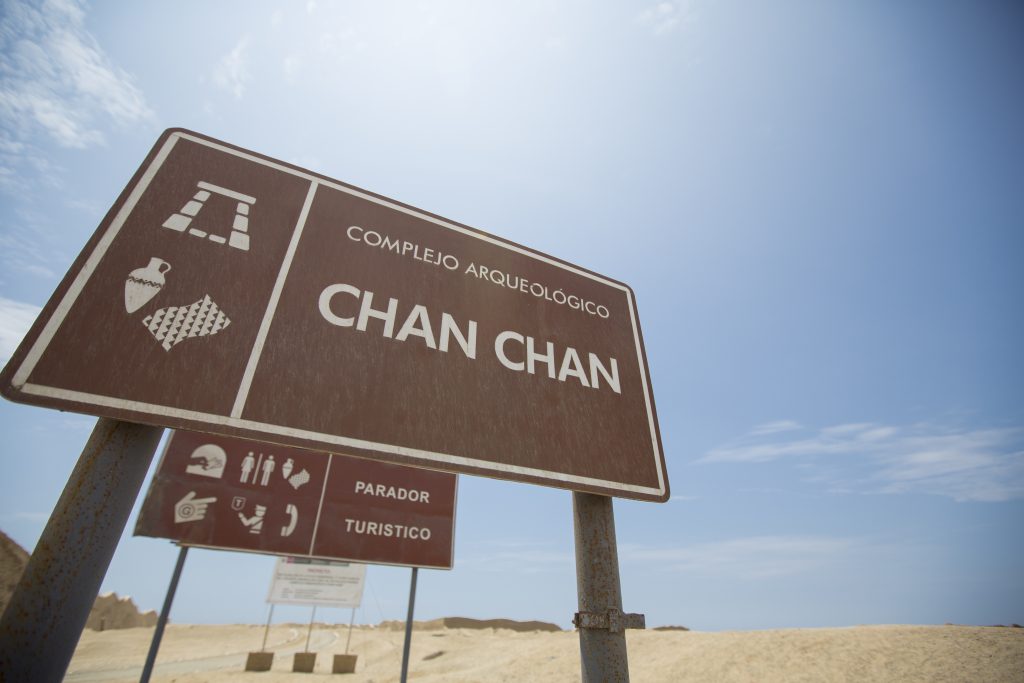 Welcome sign board at the archeological city of Chan Chan in Trujillo. Peru. The city used to be the capital of the Chimu Kingdom. It is a UNESCO World Heritage Site. Credit: Shutterstock.

Perhaps it was an exceptionally bad year for their much-needed crops. Maybe, experts say, a catastrophic series of ravaging floods destroyed the coastal areas of northern Peru. Whatever the case may have been: something cataclysmic must have occurred for the ancient Chimu people of northern Peru to sacrifice more than 100 children to appease their gods. It is a discovery that has shocked and fascinated in equal measure. Scientists believed they have found the largest ancient child sacrifice site in the world and it is hoped the new discovery, once confirmed, will shed light on the rituals of the ancient indigenous inhabitants of Latin America.

The discovery was made near the city of Trujillo, nowadays famous for its exceptional ceviche and excellent surfing beaches. Over 500 years ago, this was the land of the Chimus, a lesser-known yet equally powerful tribe that lived alongside the Incas, the most famous of all ancient cultures in the region and one also famous for having practised human sacrifice. The discovered archaeological site, named Huanchaquito-Las Llamas, has been found to contain the remains of 140 children between the ages of five and 14, alongside the remains of 200 juvenile llamas who seemed to have been sacrificed simultaneously with the children.

Experts can trace the site back to a time when the El Nino wreaked havoc along the Peruvian coastline, possibly causing devastating and ongoing floods that would have irreparably ruined the Chimu’s very livelihood. Close to other important Chimu sites already found, one which also included sacrificed children, the new Las Llamas site is, nevertheless, the largest of its kind ever found. Prior to this, an ancient Aztec site in Mexico had the dubious honour of being the largest child-sacrifice site ever found but if Peru’s latest discovery is indeed confirmed for what it’s believed to be, then it will supersede it, by far.

The remains show signs consistent with sacrificial killings, including dislocated ribs and breastbone, tell-tale signs of organ removal. The dry condition of Peru’s coastal area also means that 500-year-old footprints have been perfectly preserved. From these, anthropologists believe they can tell the children were marched to the sacrificial site from nearby Chan Chan, the largest Chimu ancient town in Peru. As research intensifies on the site, the first question scientists wish to answer is ‘why’ the sacrifice ever occurred.

It’s important to note that what has elicited the most interest from scientists is the sheer size of the alleged sacrificial site, not that it was actually found. Human sacrifice has long been recognised as an intrinsic part of ancient cultures in the Americas and several sites have already been uncovered. None this size, however and, moreover, none that have been specifically of children. Child-sacrifice was always believed to have been practised, but confirmation has been rarely found in South America.

The find has been labelled of ‘utmost importance’ by anthropologists who say the discovery will take them one step closer to reconstruction the complex social structure that allowed such mighty empires to flourish and then swiftly disappear.

The pagan faith and practice of the indigenous inhabitants of South America is something that clearly shaped their life. From what experts already know, they expect the reasoning behind this particular sacrifice to have been ‘overwhelming’. Only the belief of a greater good and the rewards of a better life for their children would have ever convinced locals to sacrifice their children. DNA testing is hoped to shed light on which areas of the Chimu kingdom the children originated.

Who were the Chimu?

The Chimu Empire stretched over the coast of northern Peru for over 1300km and ruled across this vast desert coastal region for well over five centuries. They were numerous, mighty, ingenious and powerful yet it’s hard to say why they never gained the kind of fame the Incas – their neighbours to the south – have enjoyed in our modern times.

The largest indigenous culture to have lived in the Andes, after the Incas, the Chimu have left us an incredible legacy of startling discoveries, with the magnificent adobe city of Chan Chan just the tip of the archaeological iceberg. Much like the ancient Inca, the Chimu were master farmers, coming up with ingenious irrigation systems that would work in the most inhospitable terrain and dedicating much time to perfect their artistic skills. The carefully carved treasures at Chan Chan impress even more than the expansive size of the city. It is magnificent beyond words. 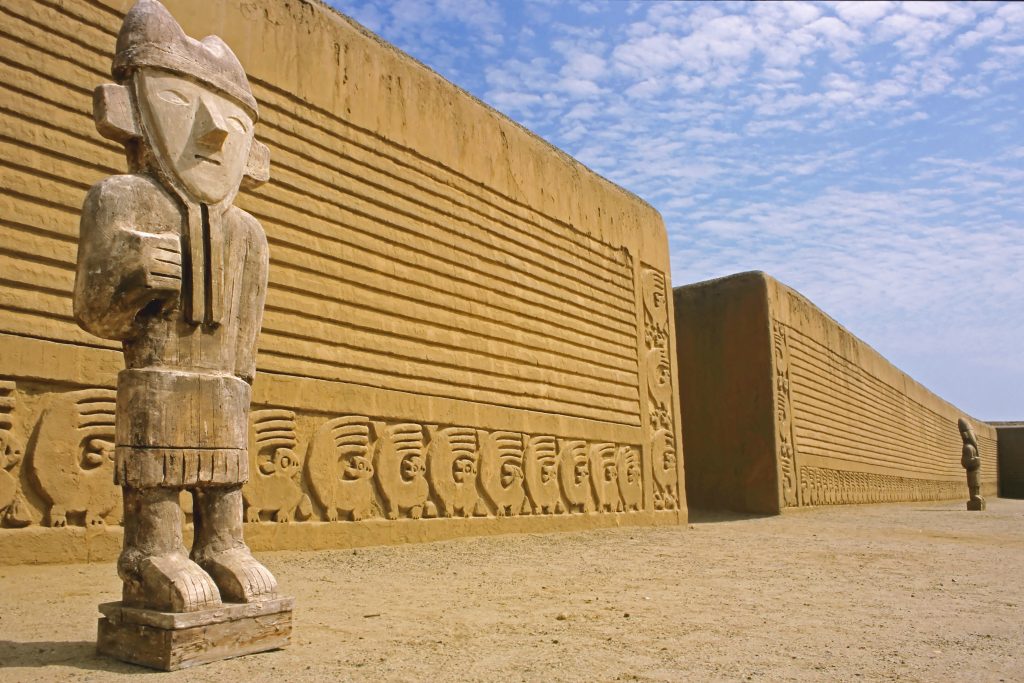 Craft making was an essential in the ancient Chimu world. So much so that master craftspeople were grouped in distinctive section of the city.

You can read more about the fascinating Kingdom of the Chimu, right here.

If you’ve never heard of Chan Chan before reading this piece, suffice to say you will be suitably impressed. First-time visitors are usually left bewildered by the astonishing site of this very unique ancient city.

This is the largest and oldest known pre-Columbian city in the Americas, believed to have been constructed over 700 years ago and, at its prime, believed to have been home to more than 50,000 people. UNESCO-listed since 1986, Chan Chan is northern Peru’s most unmissable site and boasts perfectly preserved royal chambers, halls, altars, and wide plazas, all showcasing the amazing carving for which the Chimu are so renowned. The city is believed to have been bursting with treasure of gold and silver, but looting by Spanish conquistadores has left it barren, although artefacts discovered can be seen in nearby museums. 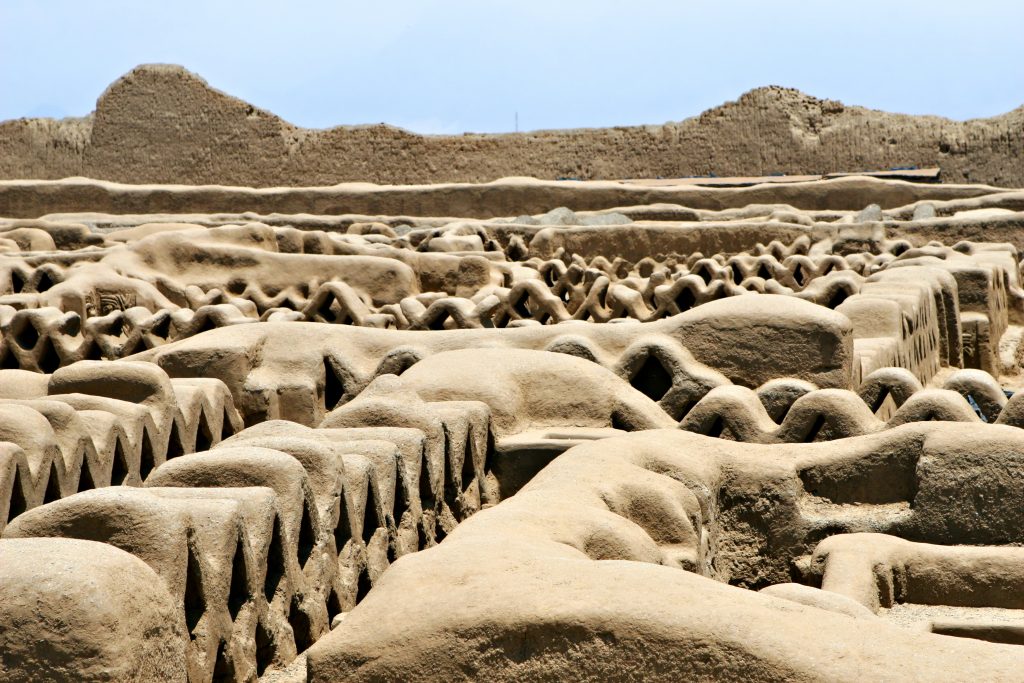 Chan Chan ruins in modern day Peru is the oldest known Pre-Colombian city in all of South America. Credit: Shutterstock

The city of Chan Chan, which you can visit on a tailor-made tour of Peru, is less than 2km from where the latest human sacrifice site has been recently uncovered. The area is incredibly enticing (especially for history lovers) as it also boasts the high-altitude ruins of Kuelap (of the ancient Chachapoyas) and the magnificent Museum of the Lord of Sipan.  Moreover, northern Peru can claim to bag one of the most spectacular stretches of the Andes Mountain range, with its Cordillera Blanca often rated as one of the world’s best, and least crowded, mountaineering destinations.

Discover more about the hidden treasures of Northern Peru before planning your trip and contact us for help, info and guidance.