One of the most fragile places on earth and one that needs a LOUD voice. Read on to discover how you can be part of the solution

Recent reports of the precarious state of Antarctica’s ice shelf has reignited the debate on responsible travel to the region. In fact, the first question most people asked was whether anyone should be visiting our planet’s southernmost continent at all. When faced with colossal environmental threats, isn’t the best way to travel responsibly in Antarctica to not travel there at all?

Within mere hours of the latest scathing report on the state of Antarctica’s ice melt and temperature rise, expert scientists were quick to jump to the defence of tourism, something many people found astounding. How could that be?

Firstly, the scientists argue, Antarctica isn’t an ordinary travel destination. This is about the only place left on earth with no permanent population. Unlike other places which are fervently protected by locals (both population and government) Antarctica’s very unique status (it is effectively owned by no-one) means there isn’t anyone to fight for its preservation except the scientists who work there and tourists who visit, are left mesmerized by the sheer grandiose beauty of the place and fight fervently to raise awareness once they return home. 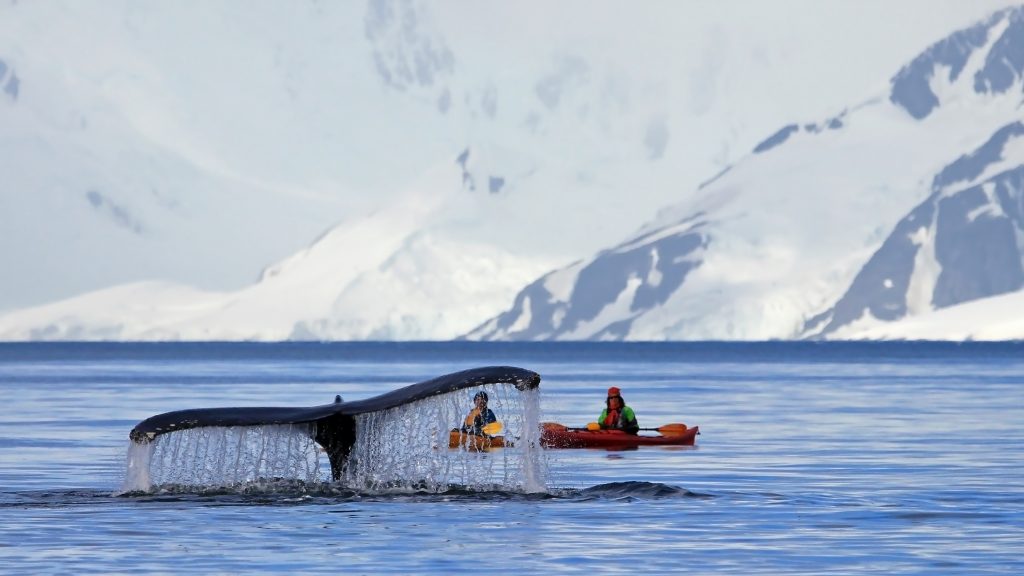 Diving Humpback Whale in front of kayaks next to the Antarctic Peninsula, Antarctica. Credit: Shutterstock

Responsible Tourism and Environmental Concerns in Antarctica – an Oxymoron?

There are some 60-odd vessels registered to bring tourists to Antarctica, all of which must abide by very strict standards as set out by the IAATO, the International Association of Antarctica Tour Operators (of which Chimu Adventures, of course, is a member). Approximately 40,000 people visit the continent during each Austral summer and their impact – as that of their ship – is something that is closely monitored. Whilst the widespread consensus is that, placed on a balanced scale, tourism is much more beneficial to the cause than harmful. Despite the burning of fossil fuels needed to get us there in the first place, it seems that as long as visits and ships are regulated and advancements in eco-technology made (necessity has always been a wonderful enticement for technological breakthroughs) the increase in awareness of Antarctica’s plight is an essential and priceless benefit of having people visit this magical place. As British Killer Whale researcher, John Durban, stated, polar tourism raises awareness and shouldn’t be underestimated. Antarctica expedition cruises turn tourists into wildlife and wilderness ambassadors and, to top it all off, visits raise funds for much-needed scientific research. This insightful Nat Geo article reveals more interesting points to consider.

Moreover, it’s worth noting that when it comes to polar ice melt and the planet’s temperature rise, it isn’t your cruise to Antarctica specifically that does damage: it’s any cruise you take, no matter how far away from the hotspot. Our collective living – including our driving, flying, eating and sheer existing – contributes to the melting of Antarctica’s ice. But visiting Antarctica may well be the pivotal experience that makes us rethink how we live and where we place our priorities. And after that, we’ll no doubt want to spread the word.

What Can You Do to Travel Responsibly in Antarctica?

Follow the drill – As opposed to most other travel destinations, Antarctica expeditions demand that every visitor travels responsibly and no-one would want it any other way. As a guest aboard an Antarctica expedition ship, you’ll be well-trained in decontaminating yourself and all your equipment before every on-shore visit, lest some bacterial hitch-hiker make its way on shore.

Pay attention – Every Antarctica expedition cruise is an insightful and fascinating lesson on the history, biology and environment of this immense, formidable yet ultimately fragile place. Daily lectures and speeches are given by experts and they’d have to rate as some of the best highlights of all. There really isn’t a single person on any vessel heading to the southern end of our planet who is only interested n seeing penguins, impossibly cute as they may be. Everyone is so keen to know more and to learn, and this is what will ultimately help you on your way to becoming an Antarctica ambassador.

Give wildlife the space it deserves – The main reason those furry little guys are so cute is because they are unafraid of us humans and usually succumb to their inherent curiosity by taking a closer (sometimes, real close) look. Try as you may, you’ll find it hard to ‘keep a respectable distance from the wildlife’ when you’re being chased by a waddling King Penguin. But aside from the impossible-to-resist close encounters, you’ll de advised to stay away from the wildlife so as not to stress them out. Read our guide to How to Interact With Animals on Your Wildlife Tour for more detailed advice on what to do and not do and keep in mind that each and every tip can be tailored to Antarctica.

Sick? Stay Put! – In case you didn’t click on the above link (which you can do now and save to read later) we’ll reiterate the point that a simple human cold can have devastating effects on a colony of penguins and all other wildlife. We know it can be a devastating turn of events should you wake up with a cold one morning during your Antarctica expedition but hiding your symptoms to not miss out on a Zodiac outing can be insanely detrimental to the survival of the wildlife, on the day and ever more. Hold off, sleep it off and tomorrow is another day and another sensational Zodiac ride!

Go before…or hold it – There are no toilet breaks on shore excursions in Antarctica so this ‘responsible’ tip is just an insider’s titbit of advice: do not have that second coffee and extra bowl of cereal for breakfast immediately before a shore landing. Your bladder will be screaming to get back on board the ship right as you stumble on a glorious colony of seals.

Look, don’t touch – Areas of the Antarctic Peninsula and all those stunning sub-Antarctic islands are covered in endemic flora which, to novices like us, just looks like (very attractive) moss. Needless to say, you’ll be instructed to not touch anything nor take any kind of ‘floral’ or ‘geological’ souvenir home, lest you disrupt the pristine environment and very delicate biodiversity.

Only travel with IAATO-member tour operators – We take our membership to IAATO seriously and so should you. Our commitment to travelling responsibly in Antarctica is your guarantee that whilst you endeavour to do all the right things when visiting, so do we. By joining an Antarctica expedition with an IAATO member operator, the hard slog is done and your mind, at least in this regard, can rest easy. 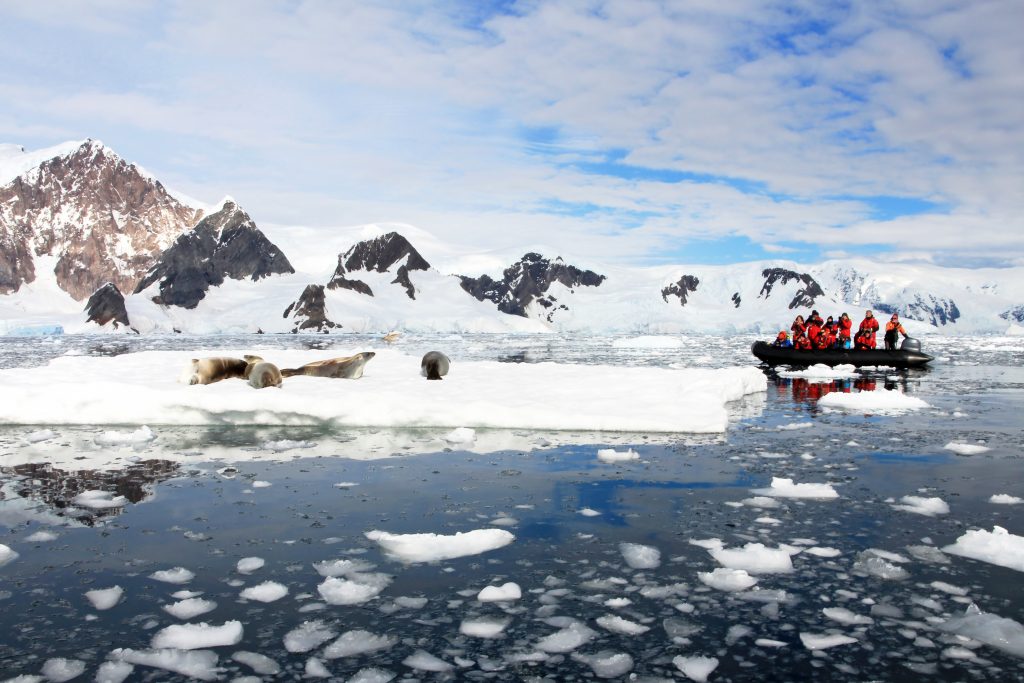 Tourists discovering the Antarctic Peninsula on a zodiac. Credit: Shutterstock

The world’s only continent without a singular governing body, Antarctica has become the responsibility of us all and enjoys a cult following the likes of which you’ll see nowhere else. This is one of the last true wild frontiers you could visit and doing so in a privilege of untold proportions. So travelling responsibly in Antarctica isn’t only possible but it may well turn out to be the best way to preserve this most pivotal corner of our planet.

Visit our Antarctica expedition page for travel options and contact us for more info.