The poster child for environmental protection and the most revered Arctic wildlife of all – read on to discover the best places to see the majestic polar bear.

Seeing polar bears in the wild is one of the most magnificent experiences any traveller could ever dream and inarguably one of the prime reasons so many head north to the Arctic on wildlife-watching expeditions. Although these incredible giants inhabit various regions across the Arctic, namely in Norway, Greenland, Svalbard, Northern Canada, Alaska and Arctic Russia, spotting them is not altogether easy. Some destinations offer better chances than others and only a handful are actually (relatively) easy to get to. Yet at the end of an Arctic day, even if you were to visit a place reputedly home to a large number of polar bears, seeing one will often just come down to sheer good luck. These incredible beasts roam wide and far and are, for the most part, solitary animals. For all these reasons, sightings of polar bears on Arctic expeditions can never be guaranteed but if you know where they are most often seen, and when, you’ll certainly be a step ahead of the pack.

Ready to take on a mighty wildlife challenge? Let’s go find us some polar bears! 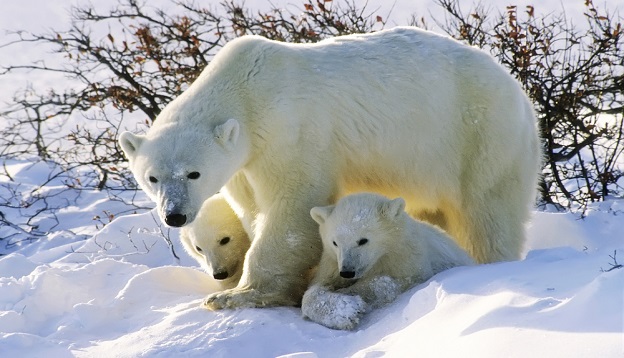 Polar Bear with her twin cubs of the year, Canada. Photo Credit: Shutterstock

First up – How to time it right!

Polar bears spend the winter on the frozen sea ice of the Arctic, hunting for ringed seals and covering impressive distances in their search for food. Aside from the fact that compacted ice makes travel to the far north quite difficult in winter (impossible by sea) the region is also drenched in darkness between November and February, making polar bear sightings near-impossible during this time. Put it this way: if you can see a polar bear in the Arctic in the heart of winter, you’ll have to be way too close to consider it a safe encounter.
In summer however (July & August, primarily) polar bears are lured ashore on the Arctic mainland by the extensive ice melt, where they’ll wander about and wait patiently for winter to return. They’ll still feed in summer, of course, yet they congregate on certain special places where seals – their favourite source of food – head to breed and calve. Heading to these special spots during the Arctic summer offers the best chances of seeing polar bears in their natural habitat. 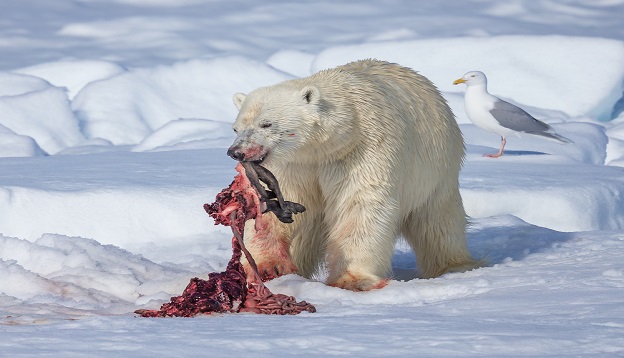 The Arctic region boasts 19 distinct polar bear ‘communities’, 13 of which are in Canada alone. Yet if you think you’ll just rock up somewhere ‘north in Canada’ in the hope of seeing polar bears in the wild, you may be disappointed. Most of the regions where polar bears are known to live are remote and inaccessible, certainly to the traveller looking for a comfortable adventure in the Arctic.

Yes, you could pack up the snow boots and head in the freezing chasm that is the Arctic looking for the adventure of a lifetime – and hopefully a sighting of a bear that isn’t all that close – or you could head to these easy-to-reach places instead.

Sitting at the peak of a peninsula in Hudson Bay, the wilderness around the Canadian town of Churchill is home to an impressive number of polar bears. Expeditions here are by way of specially-built safari-type vehicles which are well-equipped to handle the harsh tundra of the region. As Hudson Bay begins its yearly freeze at the beginning of November, the best time of all to visit is in September and October, when polar bears (and tourists) descend on the bay in droves, waiting for their northern icy passage to form. Summertime camping safaris take guests to the tundra hinterland in search of polar bears: these trips are ideal for particularly adventurous travellers looking for a totally wild adventure. A visit to Churchill can be a fabulous add-on to a Baffin Island Arctic expedition in September. 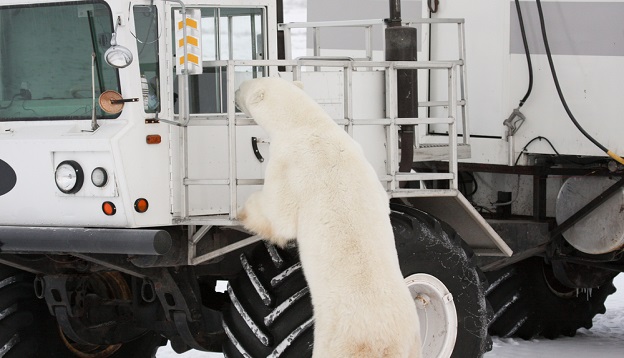 The sparsely populated Nunavut archipelago in the Canadian Arctic is ideally placed for exceptional polar bear adventures on expedition ships. It’s just west of Greenland and north of Churchill and is framed by the infamous Northwest Passage on the west and Baffin Bay on the east. The area is awash with fantastic fjords, deeply-carved bays, stunning glaciers and icebergs and a multitude of islets that attract a great deal of Arctic wildlife, not only polar bears. Considered the wildlife superhighway of the Arctic, Baffin Bay is an exceptional choice for polar bear watching expeditions aboard ice-strengthened ships.

See all our Baffin Island expeditions on offer 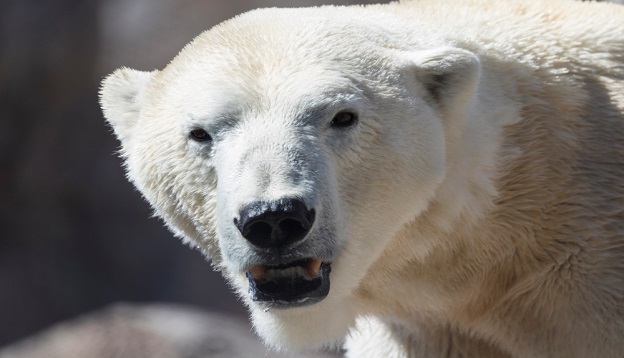 Close up of a polar bear. Photo Credit: Shutterstock

The Arctic coast of Alaska and the northern coast of Barter Island in particular, are a haven for polar bears. They’re lured here in the summer months by the carcasses left behind by Kaktovik’s subsistent fishermen and hunters and can be seen in good numbers. Tour operators run fly + boat day-trips from Fairbanks but longer visits need to be booked ahead of time given the short supply of accommodation options in Kaktovik, a small town that is home to just 250 people.

The island of Spitzbergen is famously home to more polar bears than people and is the most popular choice for Arctic expeditions in summer given the sheer array of experiences on offer. On a multi-day expedition cruise from Longyearbyen – the northernmost city on earth – you can circumnavigate Svalbard and reach Nordaustlandet in the far north-east, where pack ice attracts a multitude of wildlife, including polar bears. An estimated 3000 polar bears inhabit the Svalbard archipelago out of a worldwide count that’s estimated to be between 20,000 and 25,000. Arctic expedition cruises from Spitzbergen are ideal for those who dream of wild Arctic adventures but prefer having a few mod-cons along for the ride – all expedition ships here offer a multitude of luxuries. 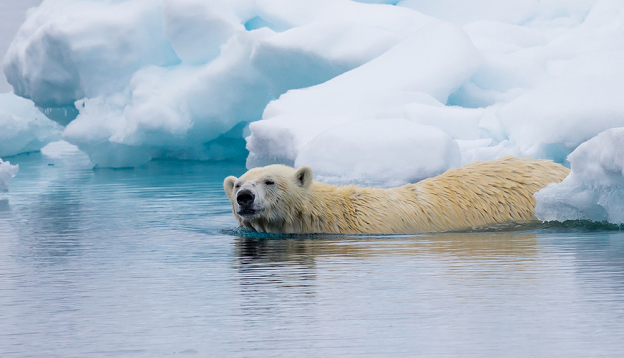 It’s fair to say that an Arctic expedition is a one-in-a-lifetime journey for many visitors which explains why our multi-country expeditions in the Arctic are so popular. Tours like our award-winning Three Arctic Islands and especially our Baffin Bay Secrets offer exceptional polar bear sighting chances, given they explore the most bear-populated regions of all.

Polar bears have been big news lately due to their rising endangered status caused by the degradation of their natural habitat. Our planet is heating up and Arctic ice – the literal livelihood of these amazing creatures – is melting faster than ever before and much sooner than ever expected. Polar bear watching expeditions, therefore, are as much about ‘unobtrusive viewing’ as anything else – the best place to see polar bears is where you can do so without disturbing them, or their habitat, in any way.

Moreover, as ice recedes in populated places of the Arctic region, remote settlements are seeing more polar bear visits each summer – something which puts both humans and wildlife at great risk. Considering these are immensely predatory animals, any expedition should also obviously take guests’ safety into consideration. Heading to the Arctic with a reputable tour operator who takes all these aspects under consideration is the only way to see these magnificent creatures in the wild, if we are to safeguard their survival.

At Chimu Adventures, we take great pride in offering fantastic Arctic expeditions to the best destinations for wildlife and wilderness enjoyment. See our extensive array of tours and cruises to the Arctic to discover what other amazing highlights you can include in your unforgettable journey.

REALM OF THE POLAR BEAR IN DEPTH

Similar to our Realm of the Polar Bear tour, but with three additional days of exploring. Scour the ice and tundra in search of the elusive polar bear and encounter even more icebergs, glaciers, and unique wildlife than you ever thought possible on this 11-day expedition. Search for lounging seals, grazing reindeer, and colonies of birds under the midnight sun.