Bolivia is the highest, most rugged and most isolated country in the southern hemisphere, a destination not to be left unexplored. This landlocked country bordering Lake Titicaca, has unparalleled scenery ranging from rainforests to mountains, deserts, lagoons and volcanoes. It boasts amazing geological phenomena such as the Salar de Uyuni, the world’s largest salt lake, the Valley of the Moon as well as thousands of square miles of virgin Amazon rainforest and towering Andean peaks.

Bolivia has a long, eventful history, from Inca conquest to Spanish conquest to troubled Independence. This has inevitably left its cultural mark, with pre-Inca ruins such as Tiwanaku, Inca remnants such as the Temple of the Moon on Lake Titicaca, colonial architecture in Sucre and La Paz and bustling modern cities such as Santa Cruz.
Did you know?

A pre-arranged visa is not required to enter Bolivia for citizens of the following countries:
For other nationalities please visit the website of the relevant consulate.
Bolivia charges a reciprocity fee to citizens of the USA, currently valued at US$135. The visa restrictions in Bolivia are a bit more specific depending on the citizenship.
Citizens of the United States pay for the visa which is valid for 5 years and permits visiting the& country for 90 days in a year. This visa cannot be extended.
Canadians may visit for 30 days in a year without being charged, but to stay longer a US$35 visa is required.

Citizens from the United Kingdom and Australia may visit for 90 days without a fee. This can be extended by leaving the country and returning for a new entry stamp.

Bolivia’s unit of currency is the Boliviano (BOB).
Please check websites such as www.oanda.com or www.xe.com for up to date exchange rates prior to your departure. We recommend that you travel with a supply of US dollars, as well as small amounts of local currency, as the US dollar is readily accepted across the continent in major department stores, hotels and tourist areas. Use local currency for small purchases. Dollars can be changed in foreign usually give a better rate, however proceed with caution! Banks are closed on Saturdays and Sundays.

Country code: + 591
Ambulance: 118
Police: 110
Internet cafes are widespread throughout Bolivia and Wi-Fi is becoming increasingly common in many hotels – certainly in the mid to high range hotels.

Bolivia has a temperate climate but temperatures can differ dramatically between day and night. The climate also varies significantly across Bolivia depending on altitude and from one climatic zone to another. It ranges from tropical, humid to cold, semi-arid. The wettest period is November to March and these are the summer months. Winter is perhaps the best time to visit (May-October), especially in the hot and humid lowlands, as it is cooler and drier.
In the highlands, it rains much less and remains sunny throughout the day but it gets noticeably colder at night. The mountain areas can become very cold at night.
The Altiplano experiences desert-polar climates, with strong and cold winds. The average temperature ranges from 15 to 20°C but at night, temperatures fall significantly to around 0°C. Frosts and snow are frequent.
In the Salar de Uyuni (salt flats), the weather conditions can be extreme, from hot fierce sun during the day, to freezing temperatures at night. The temperatures typically average 20°C during the day, but during the night can dip well below freezing with the wind chill adding to the cold. It is not uncommon for temperatures in the Salar de Uyuni to reach 30°C (86°F) during the day and fall to -25°C (-13°F) at night.

Corn, potatoes and beans are the three traditional staples of Bolivia and these have been combined with a number of staples brought by the Spanish, such as rice, wheat, and meat including beef, pork and chicken. In rural areas guinea pig (cuy) and rabbits are also eaten.
Almuerzo (lunch) is the most important meal of the Bolivian day with daily life revolving around it. Deep frying is a common cooking method of most meats, fried chicken being a very popular fast dish. A common accompaniment served with Bolivian meals is llajhua, a spicy sauce that is similar to Mexican salsa.
Some notable Bolivian dishes include the following:
Pique a lo macho - Grilled chunks of meat in a slightly spicy sauce with tomatoes and onion, served
on potatoes.
Silpancho or Milanesa - Beef pounded to a thin, plate-sized patty, served on a bed of rice and
potatoes with a fried egg on top.
We recommend our clients drink bottled water and avoid tap water at all times. Please note that many fruit juices may be mixed with unboiled water and some fruit may be washed in it.

The languages of Bolivia include Spanish and a range of indigenous languages. Spanish and Quechua are spoken primarily in the Andes region, Aymara is mainly spoken in the Altiplano region around Lake Titicaca with Guaraní being spoken in the southeast on the border with Paraguay. 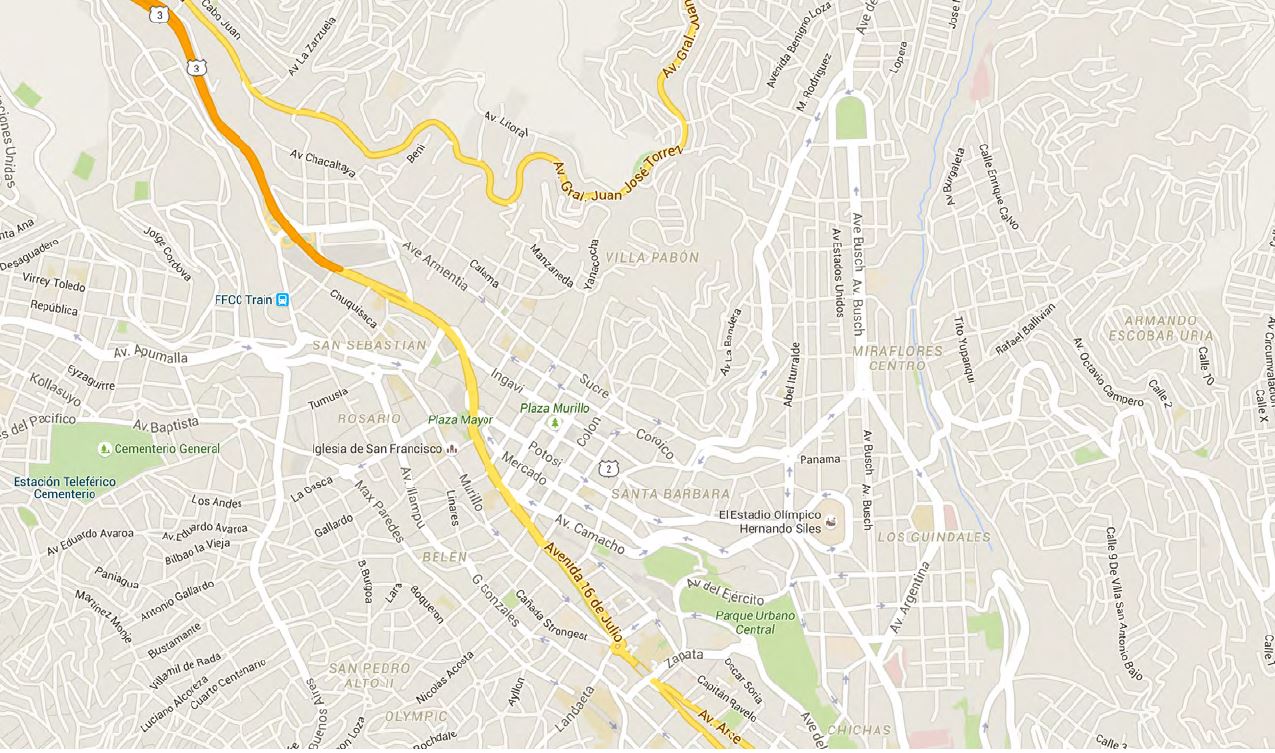