The Galapagos Islands are located west of Ecuador and are renowned for being the home to many fascinating species of wildlife, including lava lizards, red and blue-footed boobies and the giant tortoise. They are one of the world’s foremost destinations for wildlife viewing, many of the plant and animal species being found nowhere else in the world.
The urban jewel of mainland Ecuador is Quito, with its wonderful colonial architecture and set amidst the Andean Mountains. Often a stopover point on the way to visit the Galapagos Islands, Quito is worth taking the time to explore.
Beyond Quito, the culture and scenery of the highlands is captivating, where Quichua-speaking communities retain many of their traditional customs in the shadow of snow-capped volcanoes.
The eastern part of Ecuador has some of the highest bio-diversity on the planet contained in the Amazon jungle region.
Did you know?

A pre-arranged visa is not required to enter Ecuador or the Galapagos for the following countries:
For other nationalities please visit the website of the relevant consulate.
In regard to local taxes, a charge of US$120 is currently in place for ALL tourists travelling to the Galapagos Islands. This is payable in cash on arrival. Chimu Adventures is not permitted to collect this on behalf of the authorities and all passengers arriving on the islands must pay this charge.

Please refer to your Galapagos Islands Fact Sheet for more detailed information on the Galapagos.

The unit of currency in Ecuador and on the Galapagos Islands is the United States Dollar (USD).
Please check websites such as www.oanda.com or www.xe.com for up to date exchange rates prior to your departure.
Since Ecuador began to use the US dollar as the official currency, foreign exchange bureaux (casas de cambio) have become few and far between. The remaining ones generally open from 9.00am to 6.00pm Monday to Friday and until midday on Saturdays. The only foreign currencies that are easy to change within the country are Euros, Peruvian soles and Colombian nuevos soles.
Banks only open from 9.00am until 1 or 1.30pm Monday to Friday and are closed at weekends.
ATMs are plentiful in major cities such as Quito or Guayaquil and in large towns such as Otavalo, Baños and Cuenca. They are less common in smaller towns and more remote parts of the country. The ATMs generally only recognise four digit pins. Cards that are most widely accepted are Visa and MasterCard with a daily withdrawal limit of US$200 per day.

Country code: + 593
Ambulance: 131
Police: 101
Police (Quito): 911
Police (Guayaquil, Cuenca, Loja): 112
Internet cafes are still to be found throughout Ecuador although they are not as common as they used to be. Wi-Fi is becoming increasingly common in many hotels and guesthouses, shopping malls, airports and some restaurants. Please be aware that Wi-Fi is not always free.

Ecuador has two main seasons – the rainy season and the dry season – but this varies greatly due to factors such as altitude and proximity to the coast. Even during the rainy season, most days are sunny until the afternoon.
In the highlands, the dry season runs from June until the end of September. In the Amazon basin, it rains during most months, but August and December to March are usually the driest.
On the coast, the wet season (January to May) sees sunny days with showers everyday - usually in the afternoon. This is in fact the best beach weather as during the dry season (June to December) he weather is cooler and usually overcast.
The Galapagos Islands have a subtropical and dry climate with comfortable temperatures yearround. The warmest months are usually from December to June (high season) and this is the most recommended time to visit. It is generally warmer and sunnier during this time with higher ocean temperatures (of up to 24°C). It can be hot and humid from January to March. From July to November (low season) it is generally not as warm and you can expect cool winds that occasionally bring with them a light misty drizzle called “garúa”. From June, ocean temperatures can dip to as low as 15°C. The average year-round temperature is 24°C (76°F).

Ecuadorian cuisine is diverse and regional. The potato plays an important role in many Ecuadorian dishes, especially in the Andes and there are over 200 varieties of potato found in Ecuador. In the mountainous areas meat (beef, pork, chicken and guinea pig) is served with rice, corn and potatoes. In the southern mountainous regions, a typical dish is a soup prepared from green bananas and roasted pork. In the Amazon the dietary staple is the yucca or cassava, a starchy root vegetable that is peeled and then boiled or fried and used in a variety of dishes. In coastal regions shellfish, shrimp and various types of fish are important ingredients for many dishes.
Pan de yucca (a light bread filled with cheese) is found throughout Ecuador and freshly squeezed fruit juices are also common.
A typical lunch (almuerza) consists of soup and then chunks of grilled meat served on rice and accompanied by a pulse-based sauce and fried plantain.


Some typical Ecuadorian dishes include:
Patacones - Green plantains sliced and fried twice.
Llapingachos – Potato cakes stuffed with cheese, fried and served with a peanut sauce.
Seco de chivo- Goat stew generally served with rice and fried plantain.
The most popular national alcohol is aguardiente, a spirit made from sugar cane. Canelazo is a drink made from aguardiente.

Spanish is the most widely spoken language in Ecuador and is in fact the official language but there are three regional variations – Equatorial Pacific Spanish, Andean Spanish and Amazonian Spanish. They are, however, all very similar. The Indian population speaks Quechua.
Ecuador is in fact one of the best places in Latin America to learn Spanish as Ecuadorian Spanish is spoken slowly and clearly. 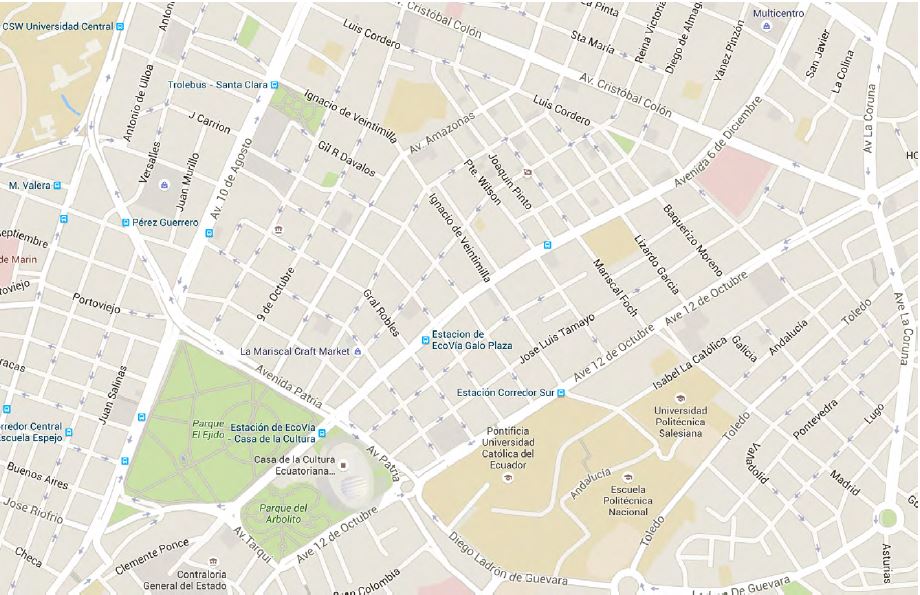