“The logistics that support this 12-guest refuge would take a space mission.”

Take turns racing your friends on a groomed track beside the runway. This is mountain biking but like on another planet.

Scale a nearby Nunatak and marvel at the view with the Wolf’s Fang peak occupying the northern horizon.

A photographer’s dream.
Explore a maze of surreal ice tunnels that have been sculpted by seasonal melt water.

Visit an Emperor Penguin colony, home to over 14,000 breeding pairs and their newly-hatched chicks.

Fly to the South Pole

Even now, reaching the southernmost point on earth is a feat that very few people have achieved.
During the seven-hour flight, we land on the polar plateau to refuel, and you will have a chance to walk around this vast, foreboding wilderness getting a real taste for the immense scale of Antarctica.

We travel in uncompromising comfort across the mighty Southern Ocean in a Gulfstream 550 or Airbus. During the five-hour flight, the African night turns to the Antarctic day as we soar over thousands of icebergs on our way to one of the most remote locations on Earth.

After landing on the ancient blue ice of Wolf’s Fang Runway, guests are whisked away to Whichaway, our flagship luxury retreat with breathtaking views across the freshwater lakes of the Schirmacher Oasis, or to Echo, our brand new camp. 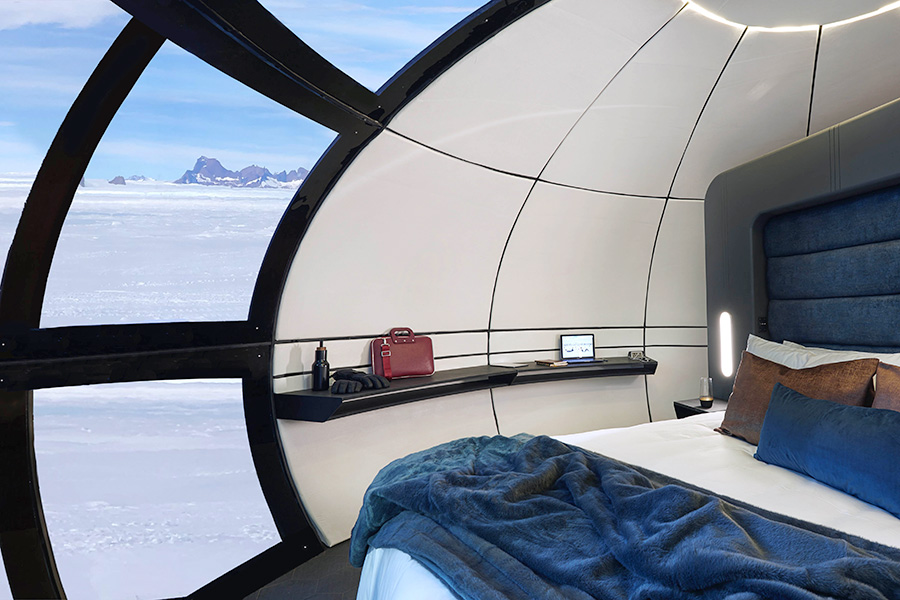 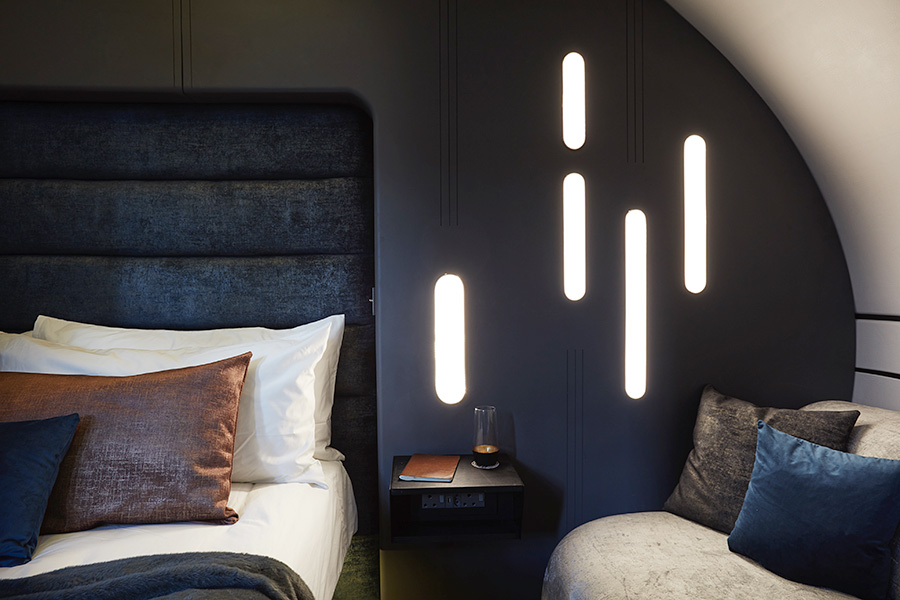 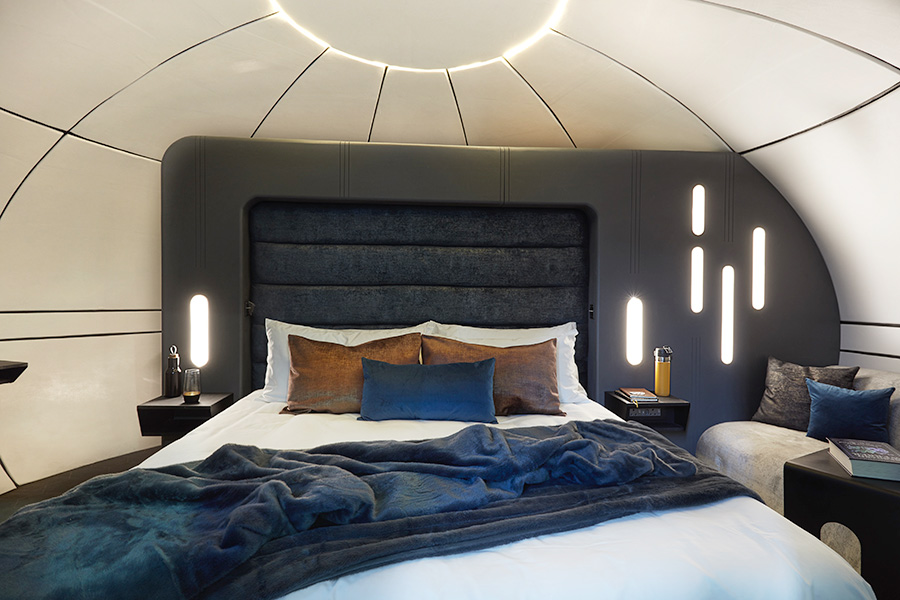 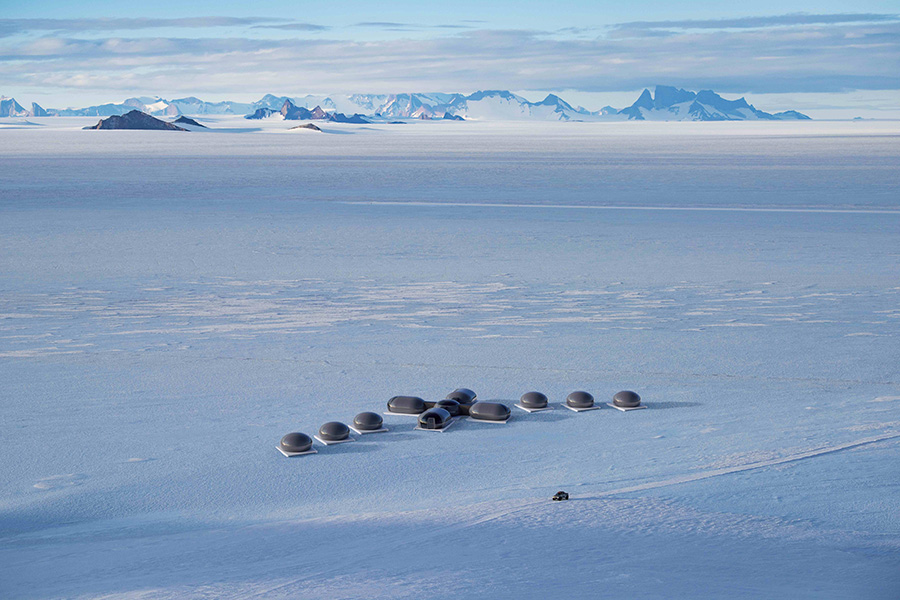 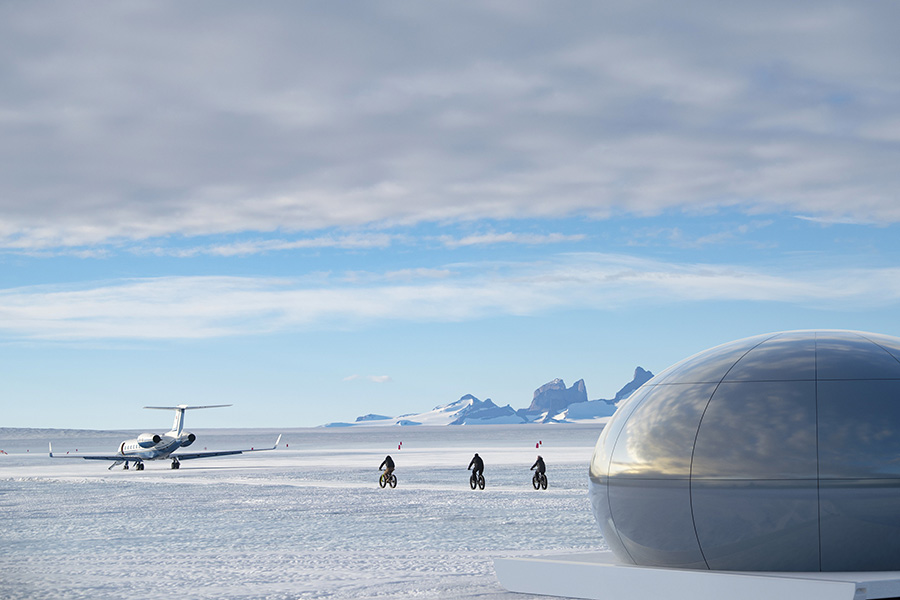 Echo features six heated, cutting-edge bedroom ‘sky
pods’ crafted from composite fiberglass. Each of the
space-inspired sky pods will be designed for two
guests, with a nod to the space-age and accented with
ultra-luxe furnishings.

Echo’s sky pods are each (20ft) in diameter; the
contemporary space is spacious, featuring a cosy
lounge area along with an en-suite wash area and toilet. On the edge of the Great White Continent lies the Schirmacher Oasis, an ice-free area that contains over 100 freshwater lakes.
This is the site of a unique camp – Whichaway.

Whichaway consists of a collection of hi-tech polar domes set on the shores of a frozen lake and encircled by a magnificent 60-metre icefall.

The camp consists of six heated and state-of-the-art bedroom pods that are designed for two guests to enjoy in comfort. At just over 6m (20ft) in diameter, they are spacious with a writing desk, wash area and toilet.. “Whichaway is an oasis of luxury in an inhospitable landscape”

Your visit to the penguins begins with a 2.5 hour flight to
Atka Bay, the site of the first episode of Sir David Attenborough’s ground-breaking documentary Seven Worlds, One Planet. Here you’ll see over 14,000 breeding pairs and their newly-hatched chicks, a spectacle full of noise and energy that is a favourite with wildlife watchers and photographers. This luxury adventure takes you into the heart of Antarctica to see the Emperor Penguins. Then it’s on to the southernmost point on earth – the South Pole!

Even now, reaching the southernmost point on earth is a feat that very few people have achieved. During the seven-hour flight by Basler, we land on the polar plateau to refuel, and you will have a chance to walk around this vast, foreboding wilderness getting a real taste for the immense scale of Antarctica.

Back on board, we continue to the South Pole, landing at the Amundsen-Scott South Pole station. At the designated marker, you will be at the lowest point on earth. A place with no more East, South or West – only North and you will be able to walk around the world in just a few paces! These exclusive 12-guest itineraries are life changing. Seats are limited, so get in contact today.

THE GREATEST DAY EVEr

Come join us on the worlds most extraordinary day trip. You will experience a landscape unlike anything else on earth and be one of the few that have ever stepped foot on the Seventh Continent.

Landing at Wolf Fangs’s runway, you will be transferred to Whichaway Oasis – a unique collection of polar domes set on the shores of a frozen lake and encircled by an incredible icefall.

This 8-day journey begins with a private jet flight to Wolf’s Fang Runaway, then from your base camp of Whichaway Oasis you will visit the Emperor penguins and the ultimate exclusive destination – The South Pole

Cruises to Antarctica typically depart from Ushuaia in South America and head toward the Antarctic Peninsula where the climate, whilst frigid, is temperate by comparison to the rest of Antarctica. Here the scenery is as dramatic as it is breathtaking, and wildlife is abundant.
After just under two days crossing the Drake Passage, beyond the Antarctic Convergence, travellers will be greeted by life changing vistas and a feeling that is impossible to describe.
Vessels that take this journey are varied. The most exceptional take sustainability, adventure, and luxury all into consideration, combining to offer the ultimate Antarctic experience.
Within the following pages you will find the best crafted vessels, catering to the needs of the conscious and curious traveller.