My knowledge of the world as a child created illusions of Antarctica as remote and inaccessible. The idea held – as I aged and began exploring the world, I still always considered Antarctica to be the final frontier in travel, a place reserved for scientists, explorers and penguins. After taking up adventure marathon running, I discovered that people travel to Antarctica for various types of holiday, as well as annual marathon events. I knew this would require looking into.

Further investigation led me to signing up for the 2012 Antarctic Ice Marathon: the world’s southernmost marathon. The marathon was held at Union Glacier, a private and seasonally run camp approximately 80° south and just a few hundred miles from the South Pole, in a southern area of the Ellsworth Mountains.

At the time of sign-up for the Antarctic ice marathon, I was living between London and New York, which provided opportunity for running in cooler conditions. I gained ice running experience through events in Greenland (Polar Circle Marathon) and Siberia (Baikal Ice Marathon). Major preparations for the unique challenge Antarctica offers. 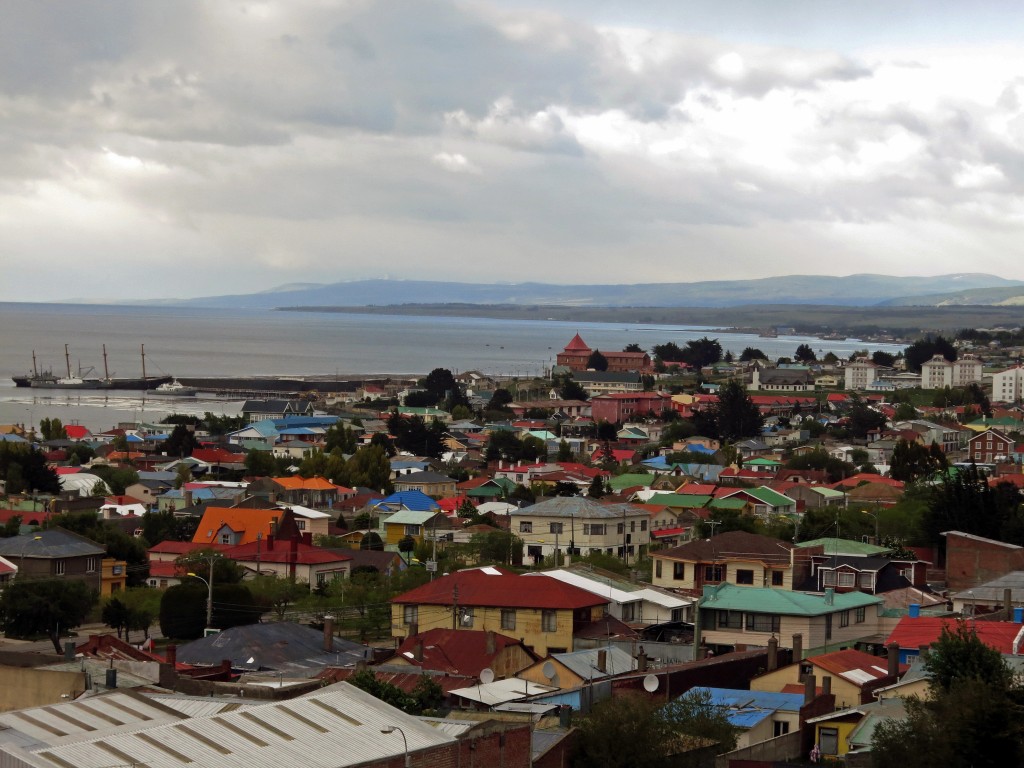 The journey began with travelling to Punta Arenas (PA), Chile – a seaside town located on the Brunswick Peninsula, north of the Magellan Strait. One the most southerly settled cities in the world. Approximately 50 competitors met in PA where we were provided a detailed race briefing, cold running gear check and what to expect while on the ground in Antarctica.

Once we understood what we were getting into, the only factor preventing our departure was Mother Nature; flying deep to the interior of the Antarctic Circle is dependent on weather. After a couple of days, conditions were clear and we headed to Presidente Carlos Ibáñez del Campo International Airport to board a flight to the white continent. 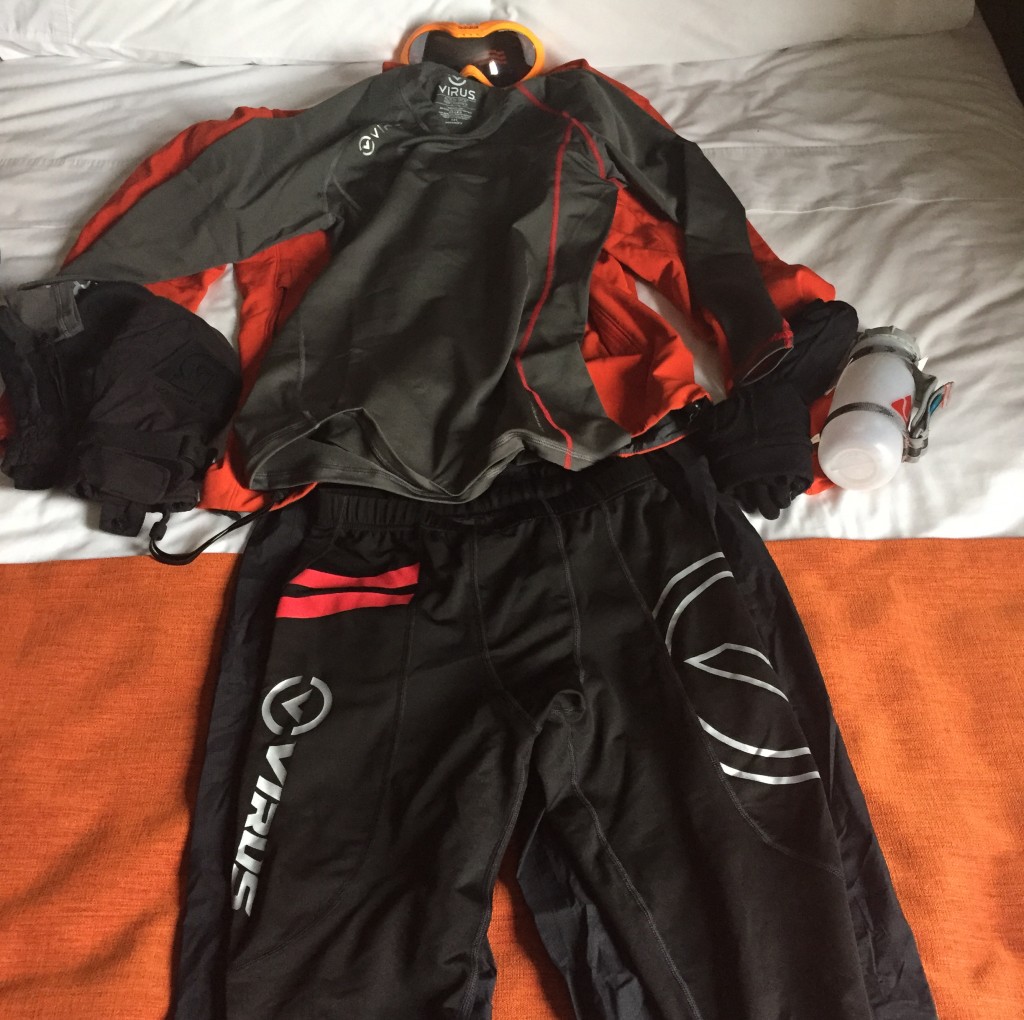 We bypassed immigration and were ushered through the airport to the tarmac under an imposing Russian Ilyushin Il-76 jet that would carry us across the Drake Passage, toward Antarctica. The Il-76 were originally used by the Russian army to deliver heavy machinery to remote areas of the USSR, which was fitting as the trip began to have a military precision feel. During take-off nervous feelings of a journey into the unknown and excitement for the ‘final continent’ kicked in. 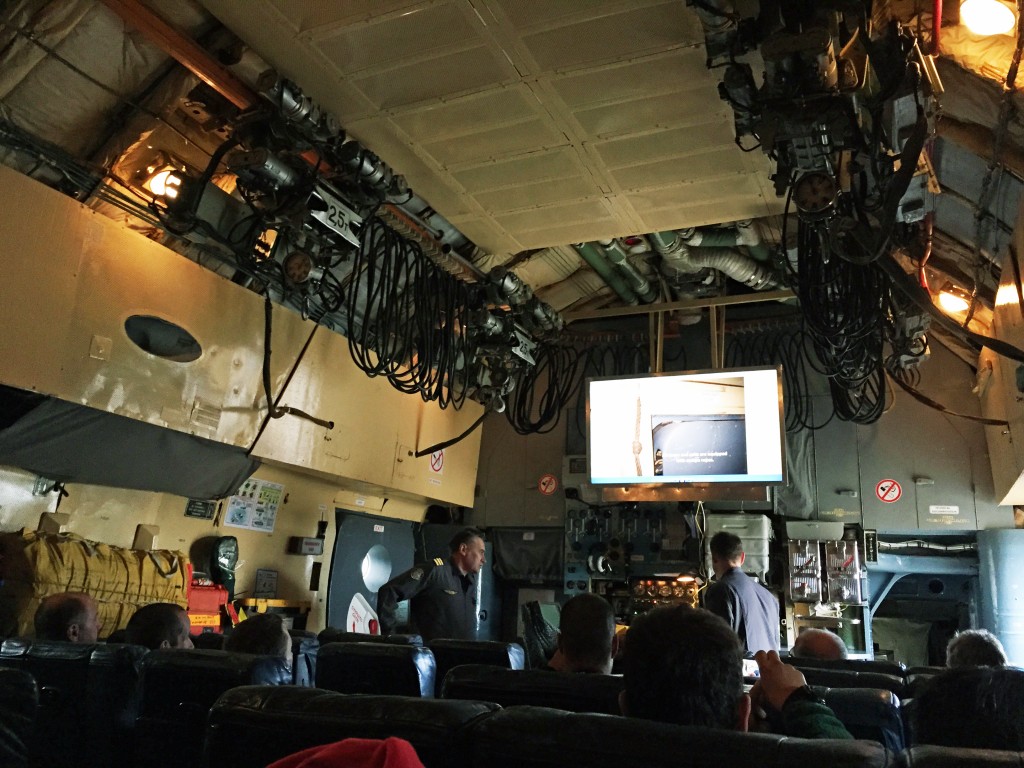 On board the Russian Ilyushin Il-76. Photo credit: Douglas Wilson.

After 5 hours of a noisy, anxious flight, we touched down on the Union Glacier Ice Runway, a strip of deep blue glacial ice naturally formed by the intense katabatic winds. As the plane door opened an instant rush of cold air filled the fuselage and we were greeted by a camp local, informing us it was -30°c in the wind and we needed all our cold weather gear on. He was right.

Descending the metal steps to the runway I had never been so cold in my life. A shock to the system which quickly passed as I took in the immense beauty surrounding us. Stunning, scattered mountain peaks and ridges in the distance, intense blue sky matching the ice beneath, crisp, clean air unlike anything I’d experienced before and deafening silence. I took a few deep, frozen breaths and felt humbled to be in a place of such majesty, while taking time to reflect on the location, and appreciating the accomplishment of finally reaching all 7 continents. It was a truly awe-inspiring moment.

Our gear was unloaded from the cargo hold of the Ilyushin and placed in large all-terrain vehicles which took us to the nearby camp. 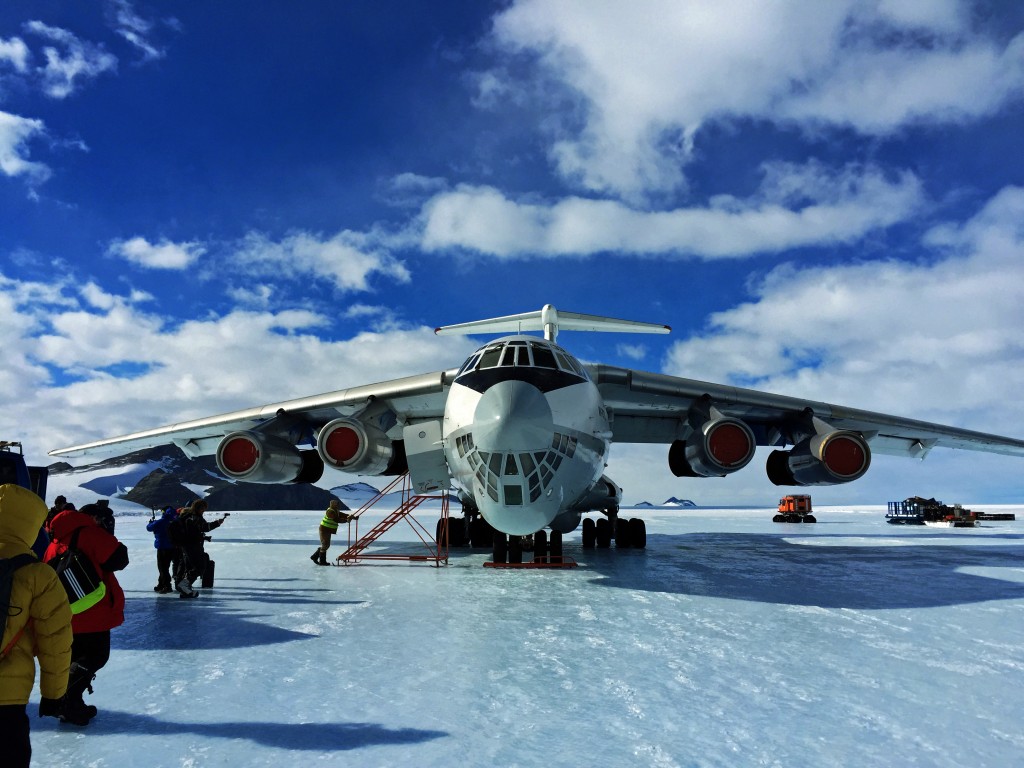 Once in camp, we were shown to a grid of uniform two man tents. They were spacious and offered an unexpected level of luxury, given the remote location. I unpacked and spent the rest of the day familiarising myself with camp. It was basic but had everything we needed for our short stay, with the exception of showering facilities.

There were several long, dome tents that comfortably held 50-60 people. One of these was allocated to race competitors for socialising and meals. We spent the majority of our time here, getting to know each other and hearing epic tales of where people had been around the world, tackling incredible events. Outside the social tent, it was easy to relax and bask in the serene beauty. Because of 24 hour daylight, it’s as if life stands still.

After the sun had circled us for a few days, the conditions were perfect to line up for the start of the 2012 Antarctic Ice Marathon. It was around -15°c when the air horn signalled the start of the race but with very little wind, blue skies and the blistering sun it was great conditions for running. I wore a layered running system with, base layer thermals, an insulating mid layer, outer layer wind protection, gloves, goggles and Gore Tex protected shoes. Spikes were not required as the running surface is generally groomed glacial snow with no ice to slip on.

We would complete two half marathon loops that had us running close to camp for safety. It was an awesome experience and every time the run became tough I took a moment to appreciate the remote surroundings and remarkable landscapes. I spent most of the run alone and isolated with crunching snow underfoot, making it more draining than a standard road race, but before long the Antarctic ice marathon was over and I crossed the line in 3rd place with a time of 4 hours 17 minutes. This was my final marathon for the year and last requirement for induction to the 7 Continents Marathon Club for completing a marathon on each continent in 2012. 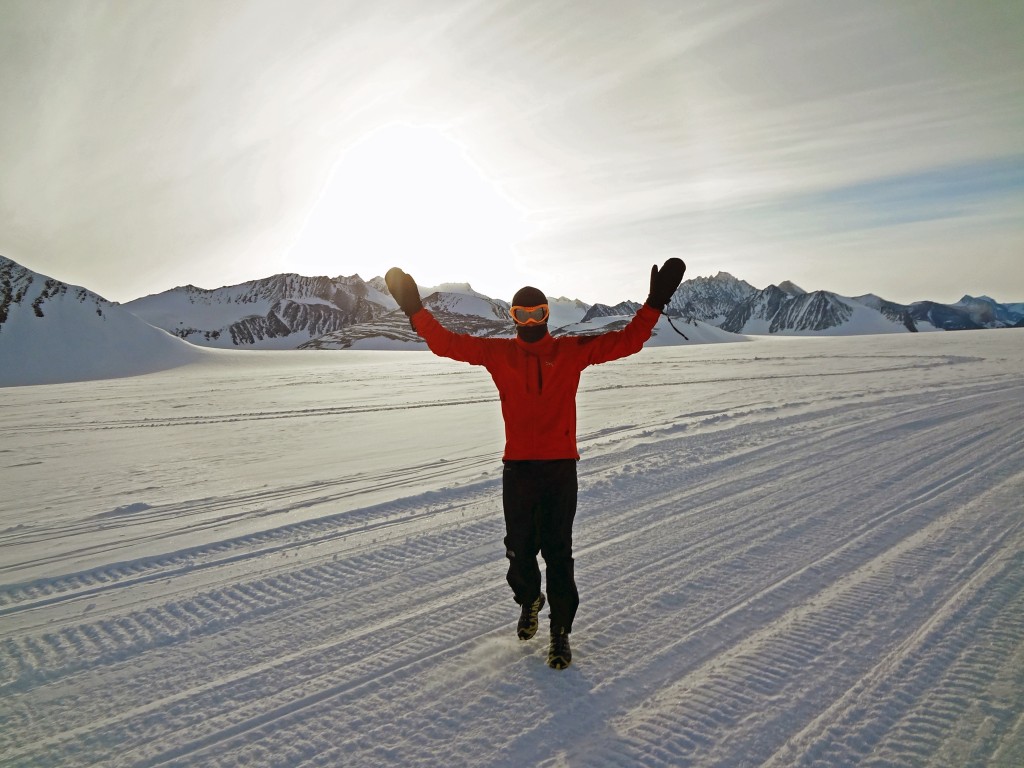 Reflecting on how truly amazing my Antarctic ice marathon experience was in Antarctica, it is a destination with so much to offer, from breathtaking mountain ranges to rugged coastal peninsulas. I was happy to be heading back to civilisation for a shower and comfortable bed but couldn’t help feel sad that my once in a lifetime trip and the Antarctic ice marathon were over and wondered if I would ever have the opportunity to explore more of this pristine, wonderful location. To anyone presented with an opportunity to visit Antarctica…take it! 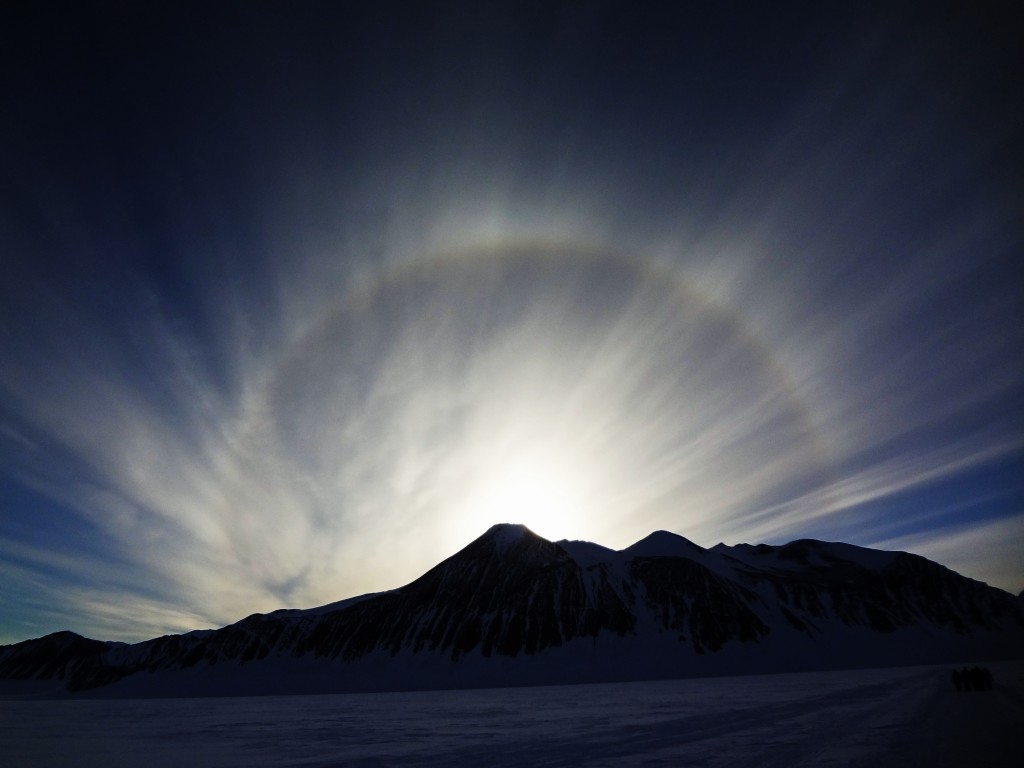 Adventure athlete Doug Wilson was diagnosed with a life threatening brain tumour requiring a 13 hour operation which resulted in serious medical complications shortly after his Antarctic ice marathon in Antarctica. Lucky to survive, Doug defied odds by rebuilding his fitness through a healthy lifestyle and mindful practices which led to a remarkable recovery. Doug visited Antarctica a 2nd time for the 1st leg of the inaugural World Marathon Challenge (7 marathons on 7 continents in under 7 days), an event he completed. He became the first person to tackle a competitive marathon on each continent in under 7 days just over 12 months after leaving hospital in a wheelchair. A feat recognised by the Guinness World Records as “Fastest time to complete a marathon on each continent (male)” – 6 Days 18 Hours 2 Minutes.

Following these achievements Doug focused on areas of mental and physical health through daily practices of Yoga & meditation and now wishes to share his experiences through his website. He also hosts events such as the Genghis Khan Ice Marathon (www.gkicemarathon.com), held in the remote Mongolian winter with temperatures as low as -50°c. To learn more, follow Doug through Facebook.

Doug on the start line for the 1st leg of the inaugural World Marathon Challenge. Photo credit: Douglas Wilson.

Get there: There’s no excuses now are there?! If you’re inspired to go to Antarctica following Doug’s story but a marathon is not on your radar, Chimu Adventures offers a range of Antarctica cruise itineraries. Check them out here.