We had been told that sightings of Pumas were rare in Patagonia as they mainly hunt at night and lay up during the day. However we had seen plenty of evidence of their presence with numerous guanaco carcasses (llamas) scattered along the route. 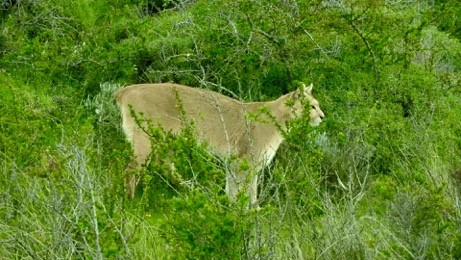 You can imagine our surprise when suddenly a large female puma appeared just off our track. She seemed unperturbed by our presence and continued to pose as she slowly made her way up the ridge. She was a beautiful specimen but surprisingly had no tail. We could not believe our luck.A couple of hours later we trekked down to the waters edge at one of the large lakes. l decided to explore amongst some of the large boulders scattered along the shore.
I moved into a gap within the rocks when suddenly Mike said ” Jane, look behind you”. A large puma had bounded on to a boulder above my head and not more than 2 metres from me. We studied each other for a second or two, the puma seemed more surprised by my appearance than concerned. It then bounded on to the next rock and disappeared into the maze of boulders. 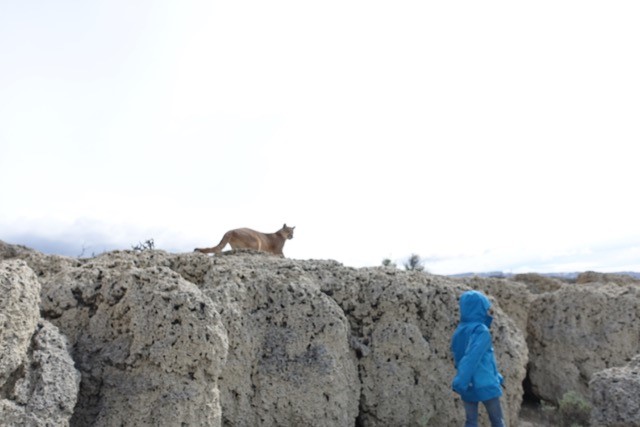 Unbeknown to me just on the other side of the rock where I was standing a father was taking a photo of his young daughter when the puma appeared on the rock above and then disappeared. You can imagine his surprise when the puma appeared in the photo.
We discussed the incident with the father, Etta and his 8 year old daughter Colette and exchanged our versions of what had occurred. It seems the puma may have been stalking Colette while she played among the boulders when I inadvertently disturbed it. Etta kindly provided a copy of the photo he had been taking when the puma appeared.

Do you want to experience Patagonia’s beauty yourself? Click here for inspiration and tours.