Travelling on the Stella Australis is one of the best ways to explore the Fjords of southern Chile. Remote and isolated this often overlooked part of our planet is frequented by only tourists, wildlife and the occasional king crab fisherman.  They are a sight to behold, a land unfolding and a must-see for the traveller who prefers the road less travelled.

Punta Arenas is the gateway to the Chilean Fjords, apart from that it is no more than a port town, pretty  grey and dull in my opinion, I thought the same the last time I visited over 15 years ago, and I see not much has changed, if you were to spend time in Punta  Arenas Id suggest you check out the many great restaurants and bars, they seem to be the redeeming feature of this Austral locale and truly bring the best out in the culture. It was late on a Saturday when we arrived so no shops were open though there was a tourist market in the square, so we picked up the last of our Chilean souvenirs and then headed to a café for our last little piece of wifi before hitting the the most exciting part of Punta Arenas, our ship, our home for the next 4 nights. 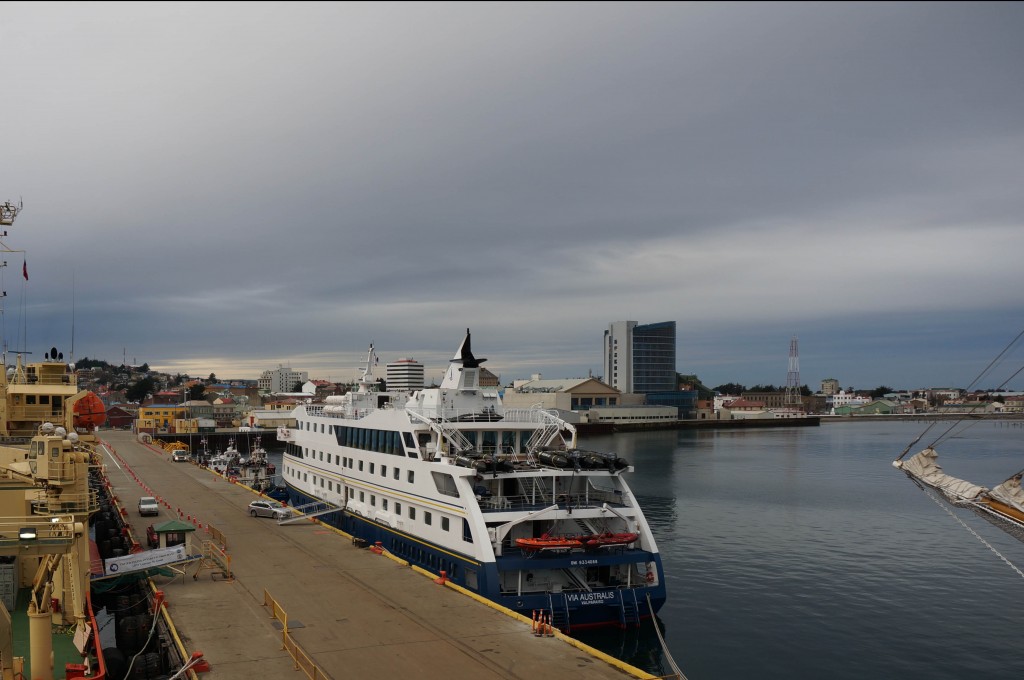 Once on board we were shown to our very nice very comfortable cabins before joining the captain in the lounge for cocktails.  The expedition is run in both Spanish and English so they simply separate the Spanish speakers and the English speakers into different lounges and conduct all introductions and meetings in these rooms. 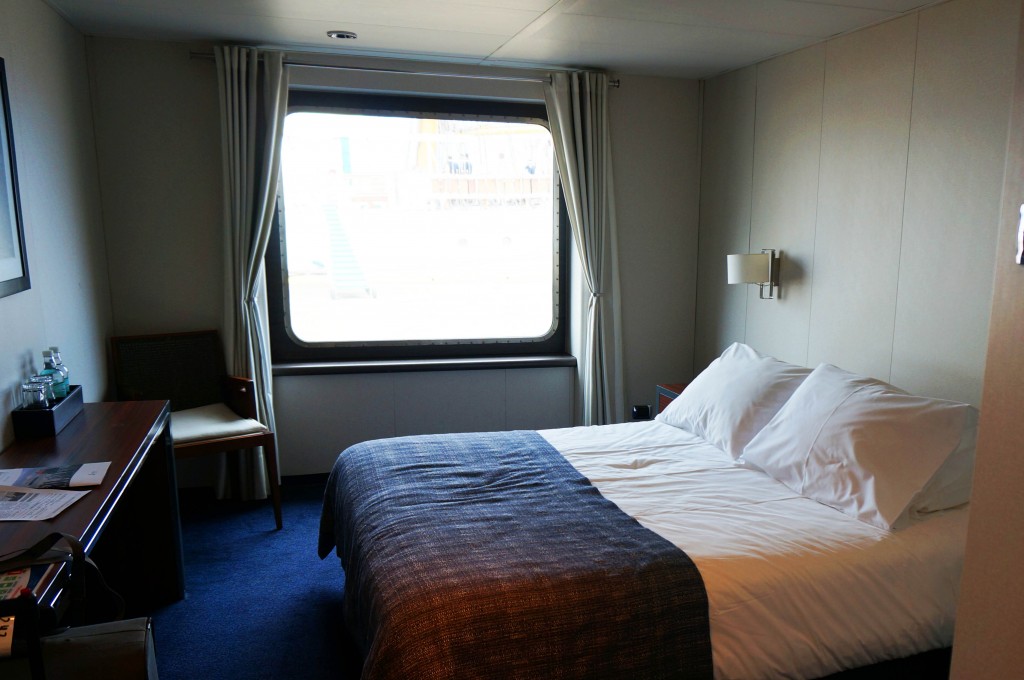 Not long after our intro cocktail we headed to the dining room on the first floor for our first four-course meal (I thought I would explode)  before retiring to the open bar again. After having the most incredible experience at Torres del Paine and taking full advantage of the bar there we were all just a bit tired so didn’t give it too much of a work out this night, there would be plenty of time for that. A great nights sleep was had by most, I amongst many slept with my curtains open so I could see what was outside my window when I awoke. 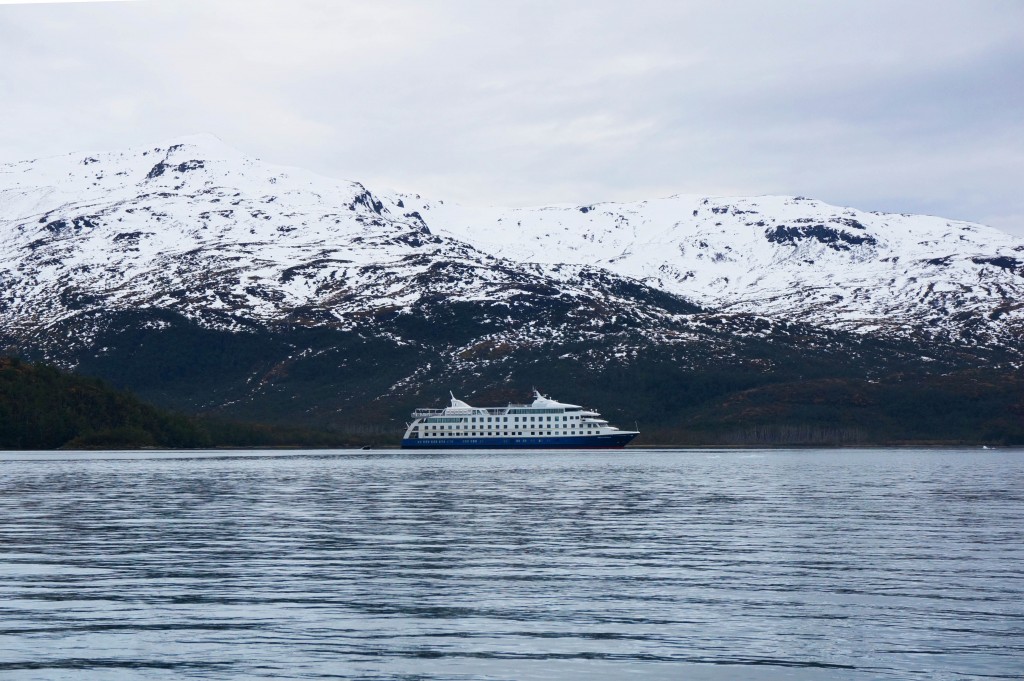 We awoke to Patagonia inside Ainsworth bay the vistas from our window were of some snow-capped peaks and dramatic rock formations. Breakfast was announced at 8 and we went in for a mega buffet.  By this stage, our stomachs are starting to stretch and were constantly eating like pigs. We’re briefed in lounge 4 (the English lounge) and we make sure we’re well prepared for our first landing. Thermal pants covered by waterproof pants, a tshirt, long sleeve, fleece and waterproof jacket was enough, it was about 8 or 9 degrees outside. We saw our first elephant seals though they looked more like rocks and spent the morning walking through the wood learning about how Patagonia is forming soil and the small plants that are following, it seems to be a land emerging from the ice age and I find myself making comparisons to Antarctica minus so much snow, ice and marine wildlife but instead micro life is clinging onto the rocks in a desperate attempt to create life and gradually the forests are biodegrading forming soil on which new life is growing and flourishing, its dense and rich.  We also learn about the introduced species gone wrong to mention a few, beavers and minks, which are destroying the local bird-life. 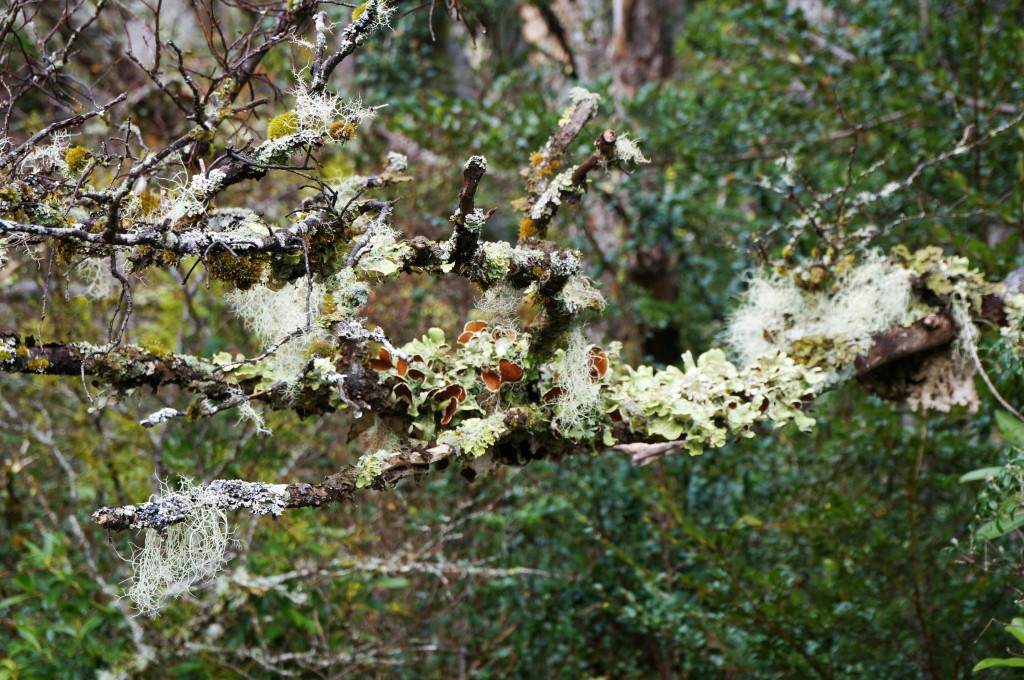 After walking for an hour and a half we return to the zodiacs where we’re greeted with a shot of whiskey and or a hot chocolate, I opt for hot chocolate, really, I have to draw a line somewhere and alcohol at 10 am is definitely on the other side of the line. Then we back to the ship before we set sail for Tuckers Islets enjoying a fabulous buffet lunch along the way, actually I’d say they lunch buffets are better than the a la carte in the evenings massive variety and delicioso! Tuckers Islets are small and wild islands in the midst of the Chilean fjords covered in wildlife, we head out in true Patagonian fashion, adorned with rain gear as the heavens sent it down and minutes later the sqall has passed and we bob about on our zodiacs getting up close and personal with Magellanic penguins and cormorants, the occasional dolphin also makes itself known. 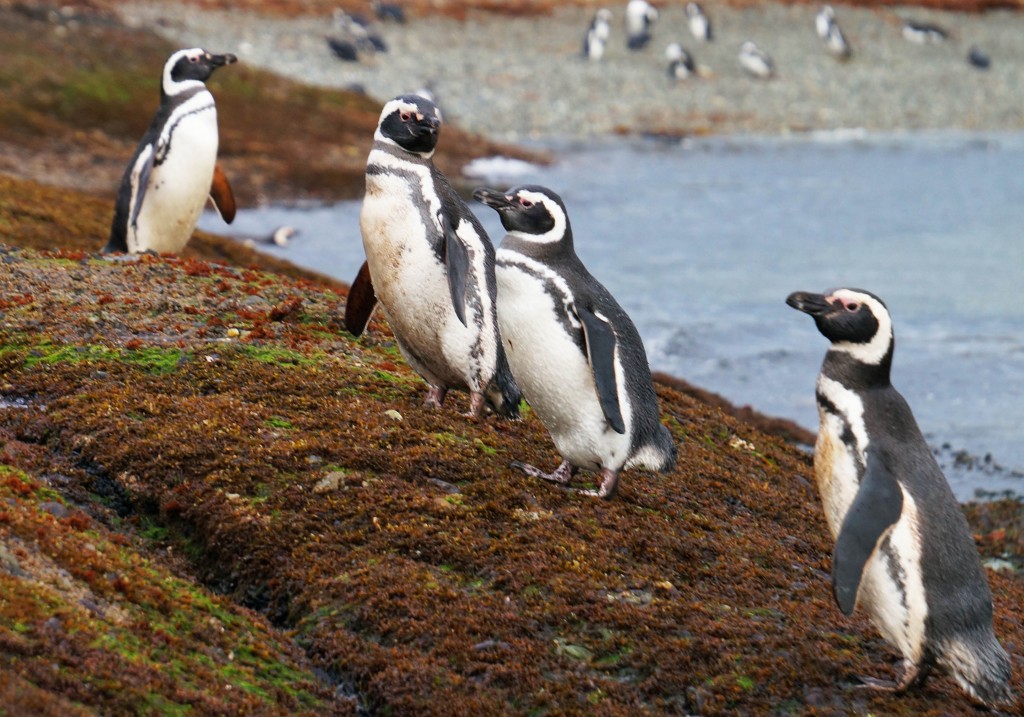 Our guide must have done this trip a thousand times but he’s so enthusiastic about the wildlife he talks and talks and talks, he truly brings this isolated and seemingly hostile location to life and we feel like we are witnessing something truly unique. 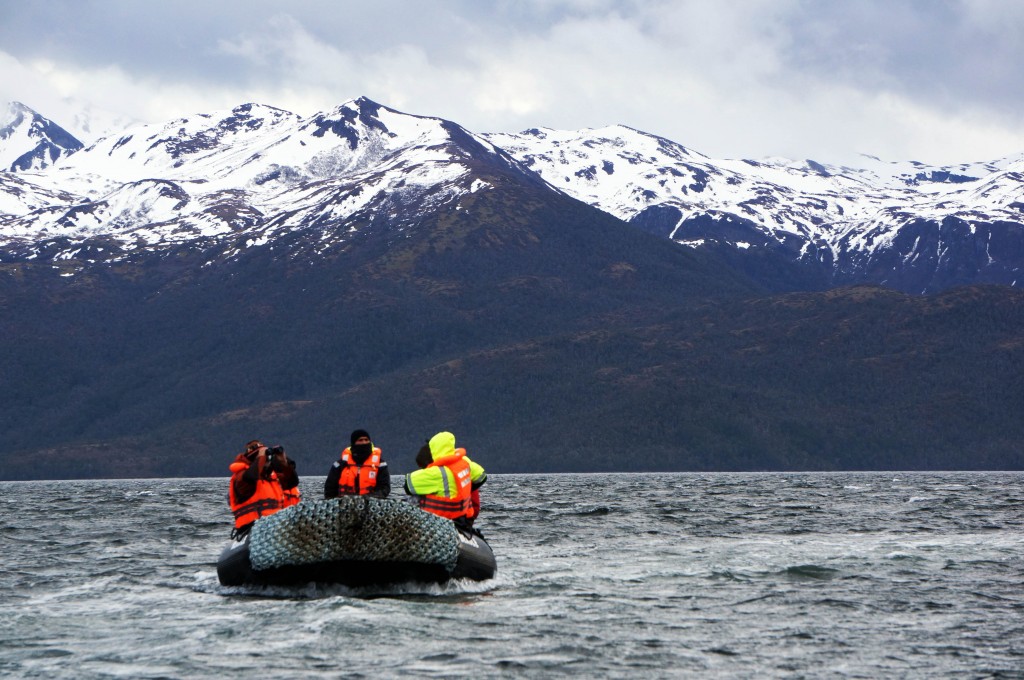 That night on the ship its Karaoke night…. Say no more…

The next morning we wake feeling the effects of a few pisco calafates and a rendition or two of Hotel California. The Chileans on the ship were equally as enthusiastic about the karaoke and we heard many renditions of bad ‘80s music in Spanish as well, it was quite a hoot. For the less vocal they also showed movies on the lower deck lounge.

Hangovers or not, we were headed for Pia Glacier, a bit of a trek from where we were, no morning landings on this day, thankfully for us, we had some downtime. 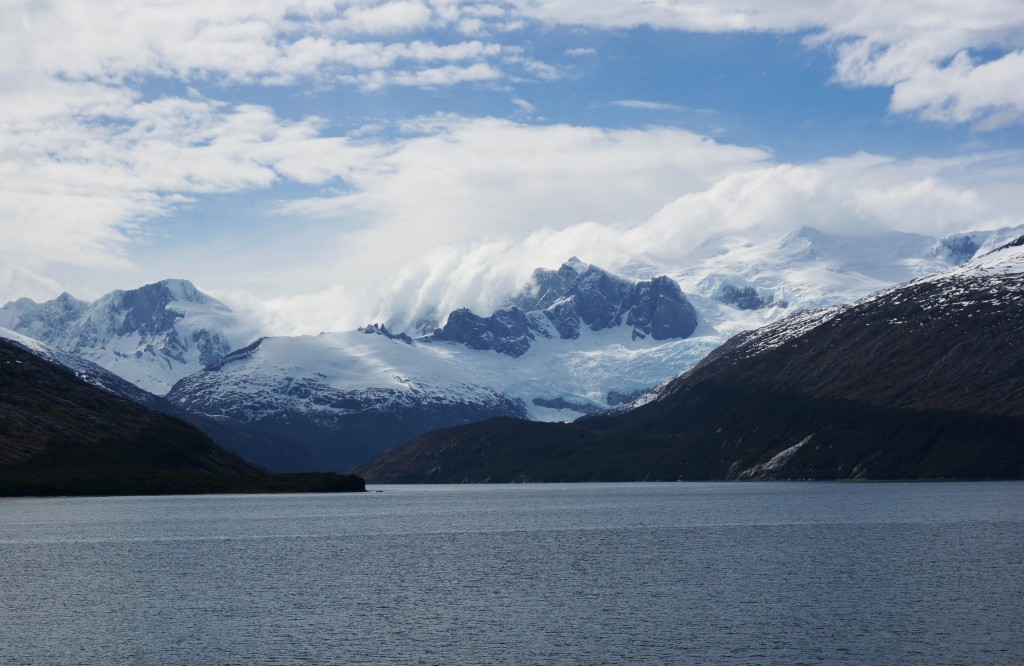 The scenery was stunning as we cruised and as seemed to be typical for this journey the clouds parted for us on arrival at Pia Glacier and we had a spectacular arrival. A stunning glacier, it was amazing to hear the carving of this formidable glacier among this ancient land as if the icefield above was aching to go for a swim.  It was very exciting to get off on the zodiacs and head through the icy water to get a closer look. We spent the next couple of hours just marvelling at this frozen monster from all angles and take in the surrounding enormous scenery, again whiskey was offered to us which, again I abstained. The open bar was killing me softly! 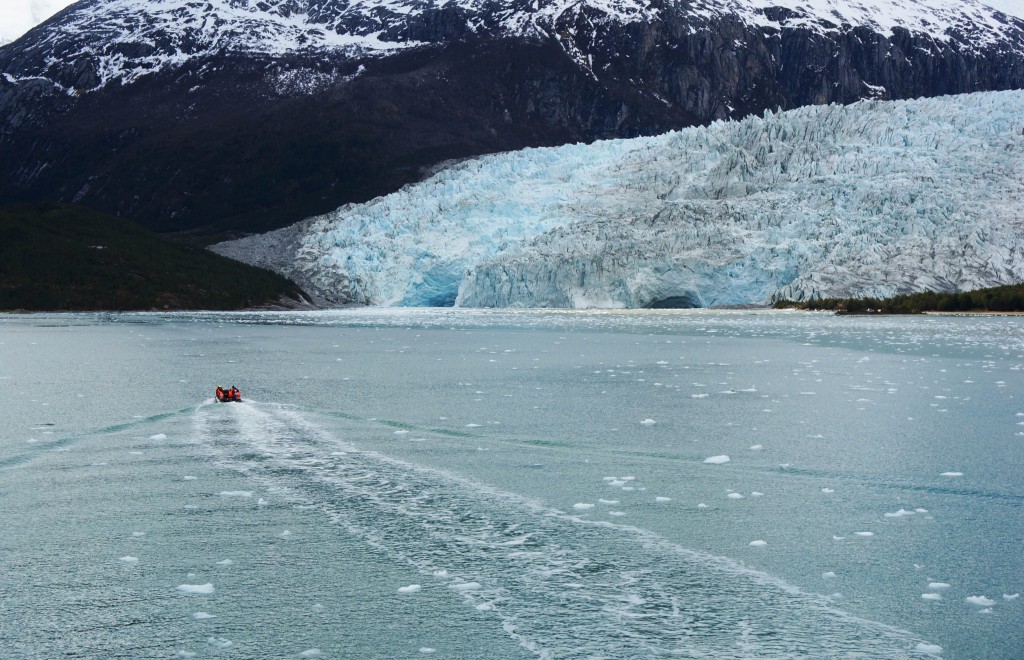 Back to the ship, tonight was a fashion parade and bingo night, only a few made it. Time to put the paws up and get some rest tomorrow was Cape Horn day

Normally the ship would visit Cape Horn in the morning but they had a schedule change for us which actually worked in our favour. In the morning we visited Wulaia bay which was a picturesque part of the fjords steeped in history. Here the Yanghan people, the southernmost aboriginal people on the planet, lived for many years naked, warming themselves only in seal blubber.  That in itself was enough to send the mind into a spin as we rugged up in multiple layers, covered our hands in gloves and heads in beanies and bowed our heads to the cold as we zoomed across the water to set foot on this frigid island. To add to this we learn that they lived largely by taking shellfish from the water, to even contemplate diving into those dark waters starkers made us all shiver.  Its no wonder these mega humans massacred a group of missionaries in years to come, they didn’t need any changing, they were already suitably adept. 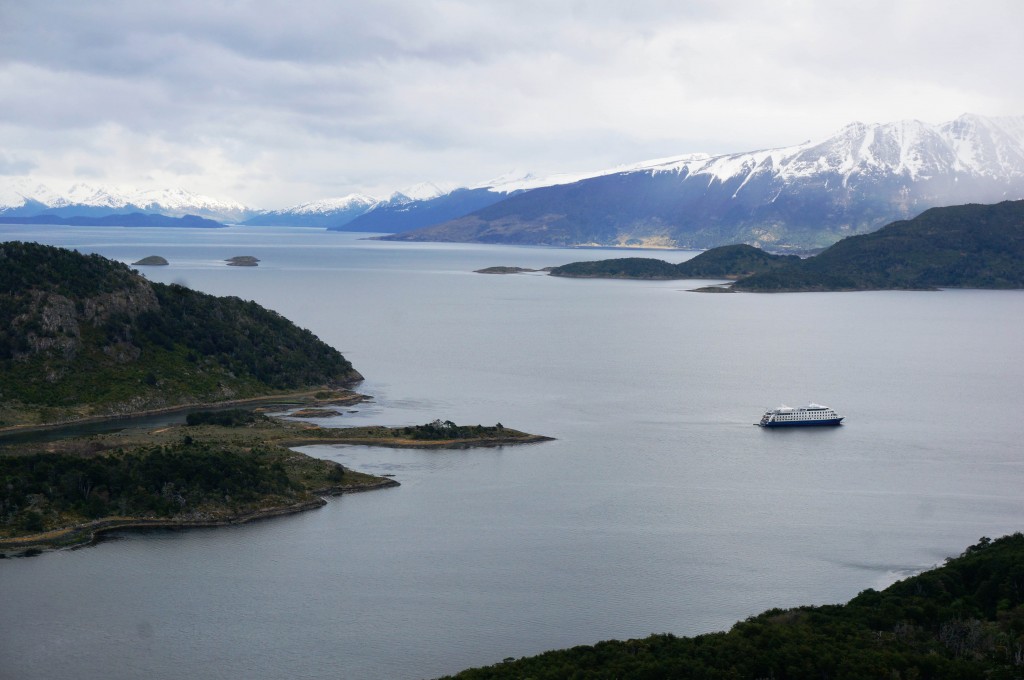 A stunning location it was also visited by Darwin and Fitzroy on their endeavours around the globe , a story in itself  but I couldn’t get past marvelling over the Yanghans and their capabilities to live at earths end buck naked! 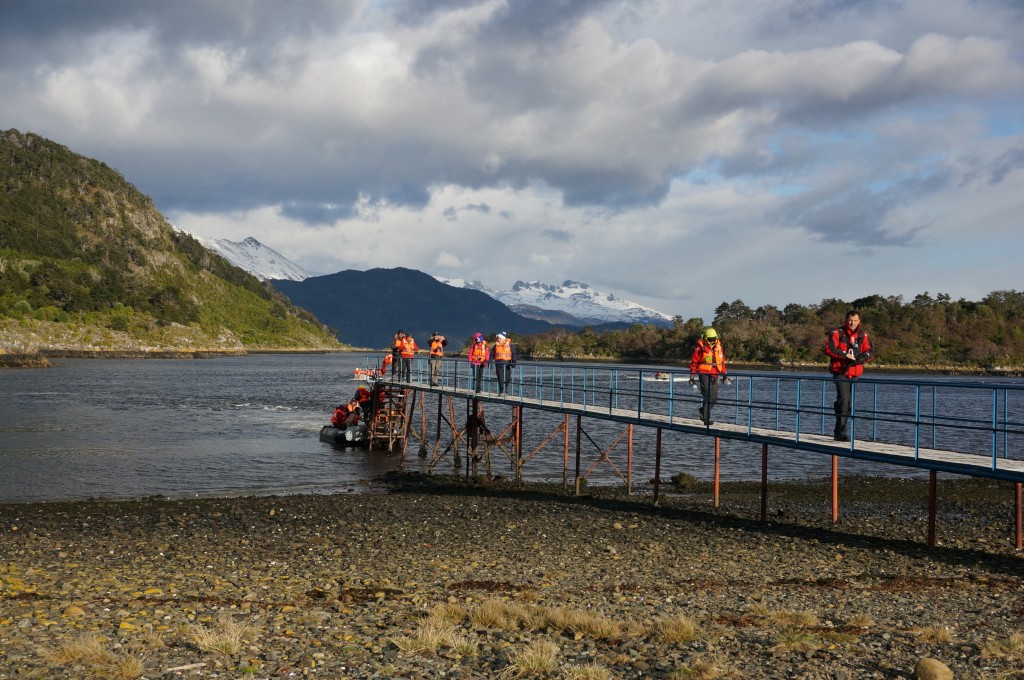 Here we walked high onto the island and were saddened to see the destruction created by the introduced beaver, chewing its way merrily through the local flora and fauna, there are eradication programs in place but the efforts seem to have made little impact. Still the vistas from above were breathtaking and one once again we were left pinching ourselves over the beauty of this isolated, emerging Austral destination. Back on the ship and off we go again this time headed for Cape Horn. We’re warned about a few waves and those who don’t cope with the ocean took sea sickness pills and took it easy. Actually we all took it easy it was a lovely cruise. We were told that landing was not guaranteed, even on a perfectly sunny still day the tide could be against us and we would have to experience Cape Horn from the ship, or the wind could be too strong, waves too high, there are a few obstacles that could see us ship bound. That said apparently there is a 70% success rate of landing. We were all excited and anticipating. The seas weren’t too rough on the way down but the wind was definitely picking up, we watched the information screen with eager anticipation, it had been such a spectacular trip up till now, could our luck be finally running out.  We arrived and the wind was 25 knots (they said at 30 knots it’s a no go zone) standing on the deck it felt way windier than 25 knots but the zodiacs were lowered and the crew got in for a scout, we waited and waited and waited, all dressed up and ready to go just in case.

They came back and gave us the thumbs up, we were beyond excited, the sun was shining and the wind didn’t seem too bad back in the bay. We all headed in with Cheshire grins on our faces.  Not believing our luck. After we walked up 160 steps or how ever many it was.. a lot … we made our way toward the monument at worlds end, the wind was strong in our face, a few photos were taken then BAM mother nature turned on a spectacle for us, completely covering us in horizontal sleet, it was crazy, only minutes before it was sunny now this… it really felt like we were at worlds end feeling her fury,   and though it was mental weather we all loved it completely, we really felt like Patagonia showed us what she was really made of. The fact that we had landed was exciting enough, add horizontal sleet and wow, what an experience. After an hour or so on the island we were all ferried back to the ship completely buzzing with adrenaline. It was the perfect end to a perfect Patagonian the day and we shared our stories over another few pisco calafates.. for old time’s sake! After cruising overnight we woke in the dock at Ushuaia, another beautiful day, the Andes were shining and Ushuaia looked quaint and cosy compared to the raw nature of the fjords that had been, a welcome return to civilisation after exploring raw nature through the fjords of Patagonia. Visit our Patagonia page for more information on visiting the Patagonian Fjords.