Australia’s geographical isolation has always been a bone of contention among avid travellers, the ubiquitous ‘I can’t get anywhere unless I sit on a plane for 24hrs!’ an all-too-common war-cry. Yet the last few years have seen an impressive increase in direct flights to what once were ‘out there’ destinations, like South America. The continent of llamas, churros and pisco sours is now ‘closer’ to us than it’s ever been before, a flurry of new and existing options making it ever so easy to fly to South America from Australia. And you know what competition does to prices, right? Yep, makes them even more affordable.

Here’s a quick rundown of the best airlines offering the best flights to South America:

Our national carrier continues to hold the baton in this competitive field, QANTAS offering three non-stop flights per week between Sydney and Santiago and daily direct flights via Auckland. Chile’s capital has historically been the best springboard for Australians flying into South America, its ideal location making it the perfect ‘stopover’ no matter where in South America you wish to head to first.

The good news: Add some favourable winds in your direction and you could fly from Australia to South America non-stop in only 12.5 hours, which is quite the astonishing feat. For direct flights with stop-overs in Auckland, you’re looking at about 16 hours all up, which is considerably longer. QANTAS is also renowned for offering outstanding plane food (almost an oxymoron!) so your culinary delights can start even before you reach your destination.

Any downsides? You can probably think of a few if you don’t actually live in Sydney (must you really put up with that chaos for the sake of a non-stop flight?) and that issue alone may entice you to look at other options below. It’s also worth mentioning that QANTAS operates the good ol’ trusty 747-400 planes to Santiago: dependable sky-tanks by all means but also a little long on the tooth, From an aesthetic point of view. Word is they’ll be phased out of operation soon enough, however, it does seem that Sydney-Santiago will be one of the last routes to farewell these classic behemoths, so you can always see it as a ‘nostalgic aviation experience’ and close at least one eye to the dated décor. FYI: those QANTAS Sky Beds in business class, however, are as wide and comfortable as they’ve ever been. 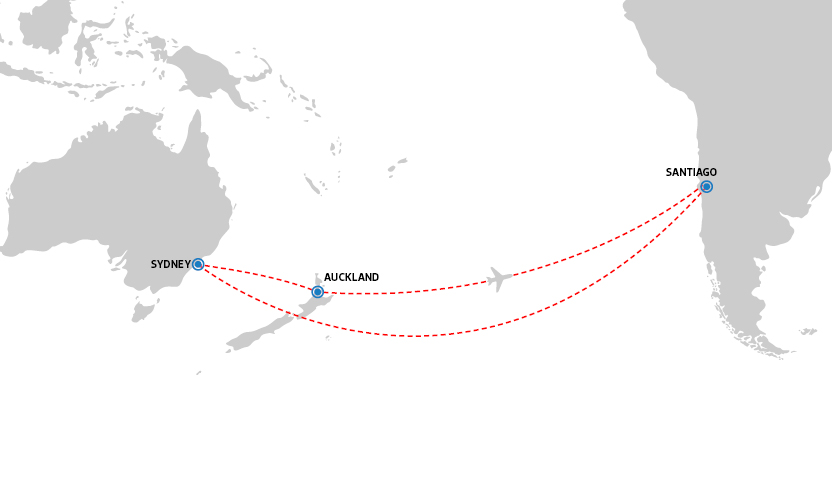 QANTAS is getting some stiff competition from LATAM, a recent conglomerate formed by Chile and Brazil’s national carriers. Yet given they have co-shared flights for ages, QANTAS probably won’t mind the slight elbow shove. LATAM brought us the first-ever direct flight from Melbourne to Santiago (via Auckland) and upped the ante with non-stop flights between the two cities, which first set off in 2017. By the end of 2019. LATAM plans to also add non-stop Sydney to Santiago flights, three times a week. If that’s not all, LATAM also offers daily flights via Auckland, starting in Sydney, Melbourne, Adelaide, Perth, Brisbane and Adelaide. 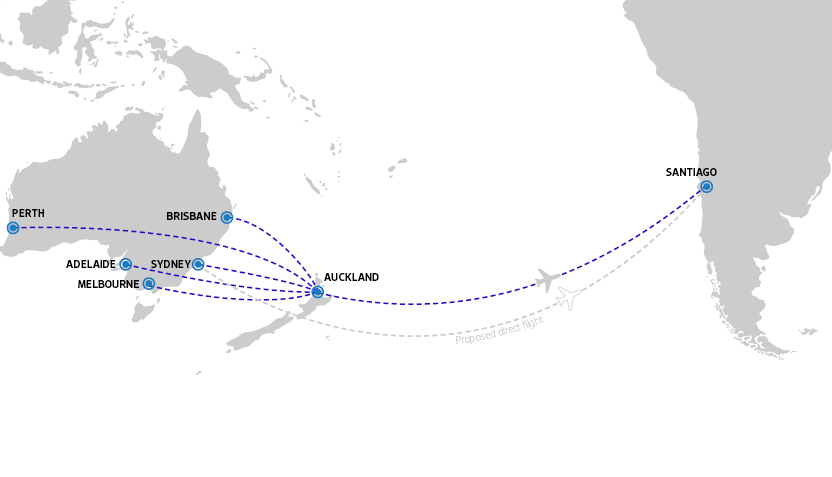 The good news: LATAM is revered for its new generation 747-800 planes: sleek, modern sky-bullets with added air moisture ensuring you actually arrive refreshed and rested at your destination. LATAM also operates a marvellous business lounge in Santiago Airport and, dare we say, it leaves all others in the continent blushing. Moreover, LATAM’s connections within South America means you can build up a wicked itinerary on the one-ticket, which is an exceptional bonus.

Any downsides? We do find that the general service and food quality just isn’t as on point with LATAM as it is with QANTAS or Air New Zealand and their seats, although very comfortable are also a little smaller than the Sky Beds. The LATAM crews are always very courteous and professional but if you don’t speak Spanish you may experience a few ‘lost in translation’ moments. Nevertheless, given all the pros, it’s fair to say many will find these downsides utterly inconsequential. 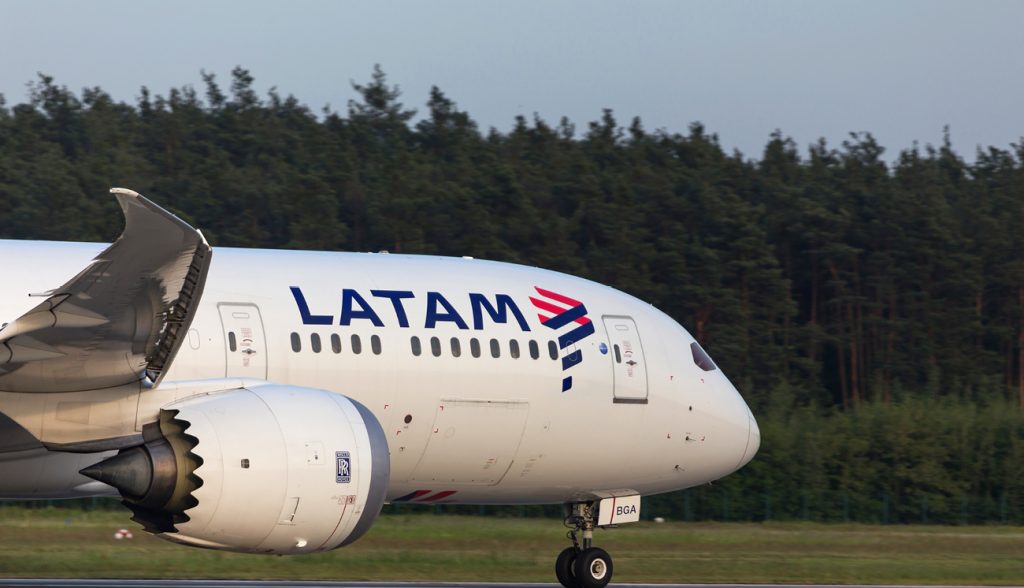 New Zealand’s national carrier is a trade-winner in every respect, renowned for its excellent service. Air New Zealand offers connections for Australians flying to South America through Auckland, yet serves up stunning Buenos Aires, Argentina, as its ultimate destination. Flights to Buenos Aires run five times a week. 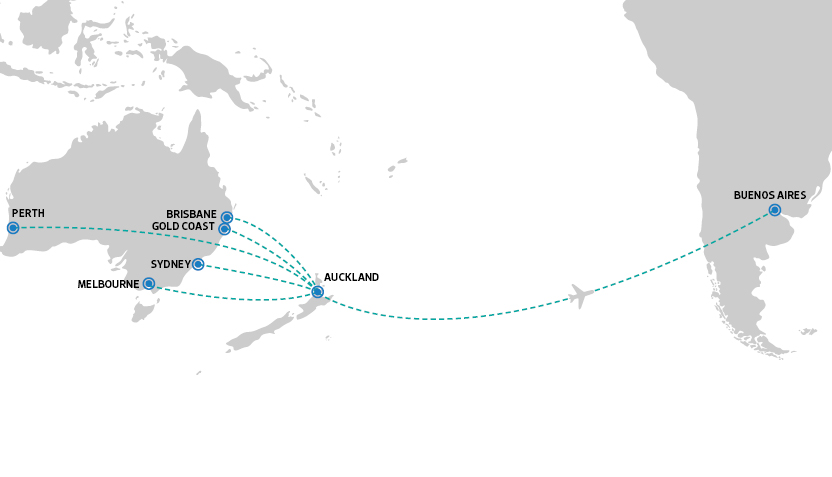 Any downsides? Although you should be aware that the Argentinian capital is a fabulous entry-point if you’re planning to tour the eastern half of the continent (particularly for connections to Iguazu Falls, Rio de Janeiro and Ushuaia) it isn’t as convenient an entry-point as Santiago. Moreover, ANZ has an alliance with Aerolineas Argentina which is great, domestically, but doesn’t offer the options of LATAM. Still, who’d say no to a few days in fabulous Buenos Aires at the start of a tour of South America? 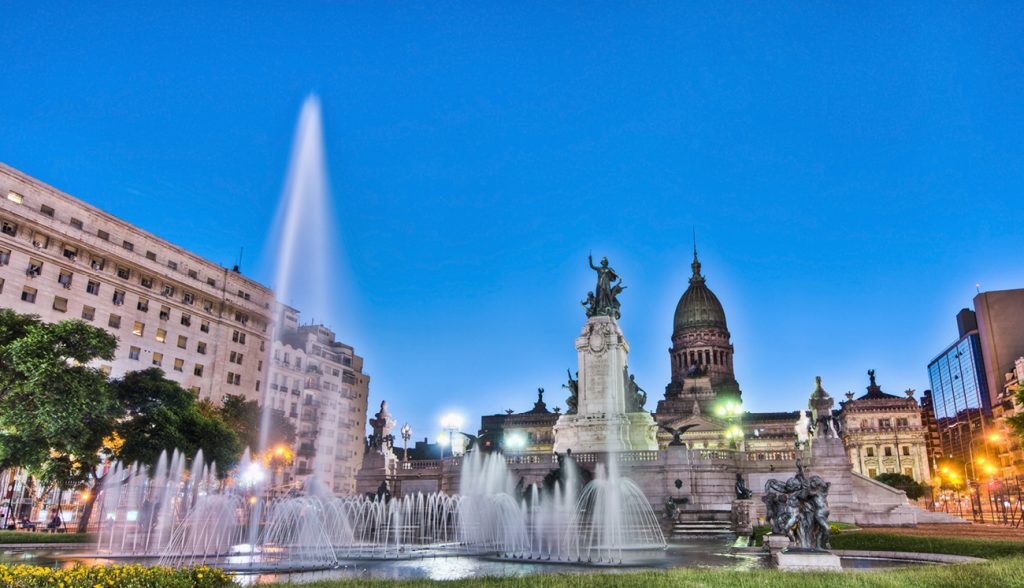 Flying to South America from Australia via the USA – Your options for flying into South America are exponentially increased the moment you choose to enter via the US and that’s because there are many more connections from the north. This option is overlooked by Australians who bemoan the extended connection times once on US soil. However, it can work out much cheaper to reach certain destinations via the US, namely Central America and, particularly, Ecuador and the Galapagos Islands. For the most popular destinations (like Peru, Chile, Brazil and Argentina) however, it is still cheaper and faster to fly non-stop (obviously) or via Auckland.

Live in Western Australia? Consider flying the other way! – Here’s another pearler: Flying to South America from Western Australia via Dubai or Doha are very feasible options. Flight times are usually longer with both these options but they can often work out to be cheaper and add a unique stopover to your journey, with options to extend your trip in either city.

Round-the-world tickets with One World – A round-trip ticket with one of the world’s airline alliances is a fantastic option for Australians looking for a longer journey. There are several from which to choose but we find that the One World Group – which includes QANTAS, LATAM, British Airways, American Airlines and others) – is the best for South America travels. You could easily fly to South America from Australia direct, head to Europe from there and home via Asia.

At Chimu Adventures, we’ll help you fly to South America from Australia, any which way you fancy! Not only do we organise tailor-made tours to South America, Antarctica and the Arctic but we also endeavour to find the best flight deals around. Speak to one of our Destination Specialists today and let us help you plan your once-in-a-lifetime journey!

Marvel at the cascading beauty of Iguazu Falls, the famous sites of Rio de Janeiro and hidden histories of Cusco on this express tour of South America.