How to See Antarctica’s Seal Species

As a result fur seals have much stronger fore flippers, which is why when on land you’re likely to see fur seals standing upright on their fore flippers. True seals generally just lie horizontally on land and have to wobble their entire bodies in a caterpillar fashion to move around.

Although fur seals are present in the sub-Antarctic they are not present in Antarctica itself.

What are the five Antarctic Seal Species? 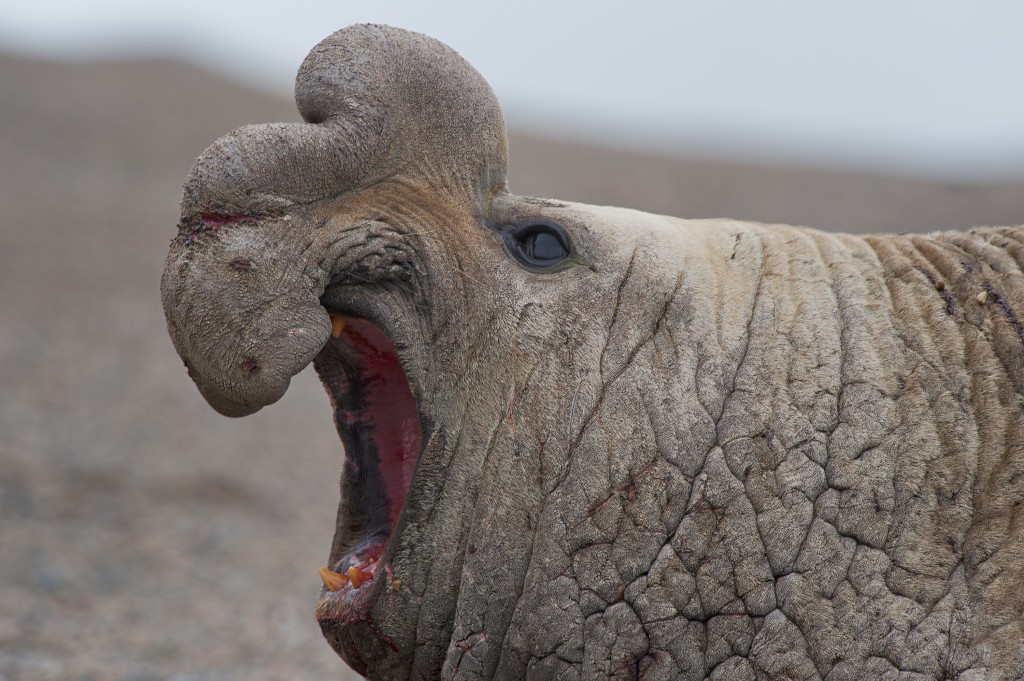 Not just the largest of the true seals but the largest of any animal in the wider seal families (Carnivora) to have ever lived. The males in particular can be extraordinarily large, weighing in up to five tonnes. The seals are normally a blotchy brown/grey colour.

The mature male Elephant Seal also has a protruding phallus which gives the species its name. Male Elephant Seals are also known to make extraordinarily loud roaring noises during mating season. Alpha male seals can have harems of up to 40 females.

Elephant seals can dive to a staggering 1700 meters in depth. The total population of Southern Elephant Seals is estimated to be about 600,000.

Southern Elephant Seals can be seen in Antarctica but are more likely to restrict themselves to Sub-Antarctica islands such as Macquarie Island or South Georgia and can easily been seen lazing on the beach at these locations. 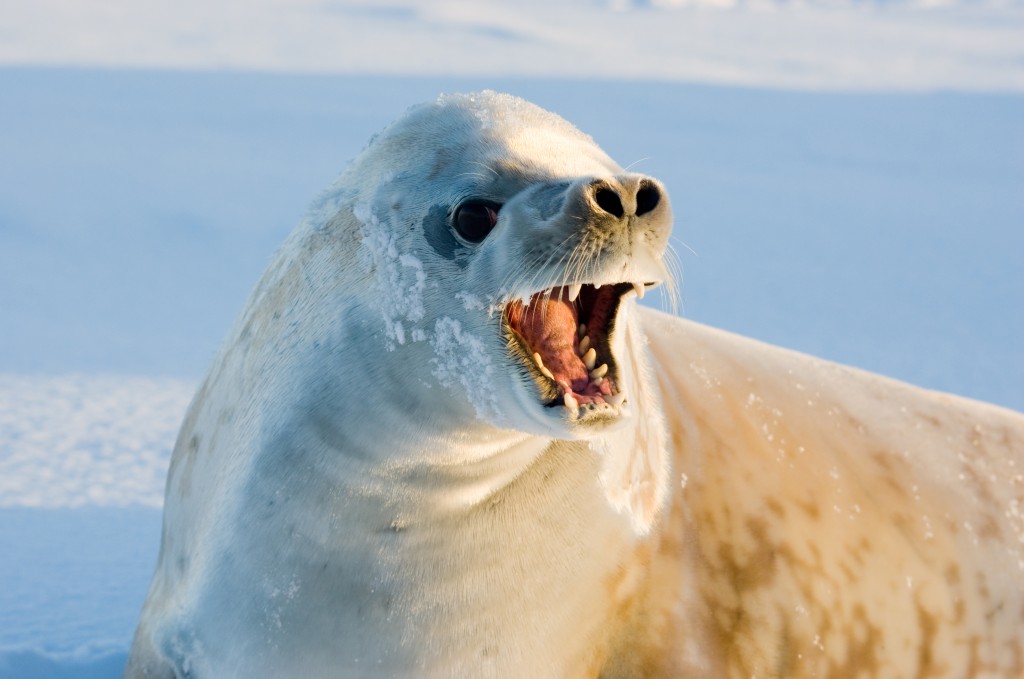 The most common Antarctica seal with an estimated Antarctic population of around 3 million animals. The Crabeater was so named because the early explorers noticed what looked like broken crab shells around the lazing seals. There are in fact no crab species within Antarctica waters and rather than being crab shells they would have been the exoskeletons of krill that the explorers had seen. The Crabeater name has since stuck, despite its misleading name.

Crab eaters can swim to depths of 300 meters although generally krill exist at a depth of 20-30 meters so this this swimming depth is more common.

Crabeater Seals can be seen in many places around Antarctica but are most prevalent in a couple of locations including the Antarctica Peninsula. They are not present in the sub-Antarctica islands. Unlike most other seals, breeding occurs in pairs, rather than with an alpha male/ harem system.

Crabeaters can sometimes be the hardest seal to identify mainly because their fur can range from a cream colour through to brown and grey (similar to other seals). They don’t normally have the blotchy fur of most other seals however and their noses are much more pointed than say a Weddell Seal. It could be suggested that the crabeater’s profile is almost dog like.

Crabeater seals do not sleep on land like Elephant seals and are much more likely to be seen on ice floes near the Antarctica continent. 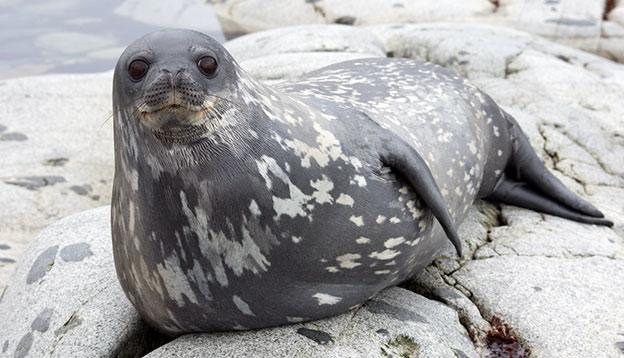 Quite possibly the cutest seal, especially the pups. These seals have round faces, short necks, big eyes and long catlike whiskers.

Despite having the same name as the Weddell Sea, this Seal is in fact found all around Antarctica. It just happened to be seen for the first time by British Whaler James Weddell when he was explorer the sea that also bears his name.

With a population estimated at over 1 million animals, these seals are commonly seen around Antarctica. Like the Weddell Seal, they are generally restricted to Antarctica itself and aren’t normally seen on the Sub-Antarctic islands.

Weddell Seals can swim as deep as 800 metres which is a remarkable depth for a reasonably small mammal. Rather than live on ice floes like the Crabeater Seal, they are more likely live on fast ice, especially when breeding. During this time the male Weddell Seals have the unique habit of using their teeth to keep open hole in the ice in order to access the water below. If they don’t regularly chip away at the ice they risk either drowning underwater with no way back to the surface, or staving on the surface because they can’t get back underwater. As a result Weddell Seals have large, thick fore teeth which they use to chip at the ice. The males also use their well-kept access holes to attract females.

The above said, Weddell Seals can be regularly found on ice floes around Antarctica too. 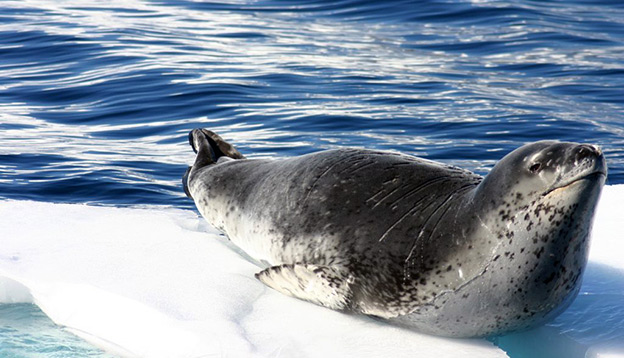 The most fearsome seal in Antarctica and with the exception of Orcas this seal is pretty much at the top of the Antarctic food chain. The estimated population is approximately 150,000 animals although it’s hard to estimate precisely as these animals lead a mostly solitary life, rather than socialising in large groups.

The Leopard Seal is so called because of its spotted fur, which roughly resembles that of a leopard skin. They have a long neck, a very large mouth and large teeth and its mouth can open as wide as 160 degrees. Its head has a reptilian appearance.

The Leopard Seal is actually quite unique in that it’s almost a blend of a fur seal and true seal (although it’s categorised as a true seal). Its fore flippers are much bigger than other true seals and this is what makes them so agile. They can use their fore flipper and rear flippers to swim or change direction, giving them more power and agility than all other seals.

Leopard Seals feed on small fish and penguins but have been known to attach other species of seals too, especially their young. Unlike the other Antarctica seals, Leopard Seals stay near the surface and do not dive to deep depths. 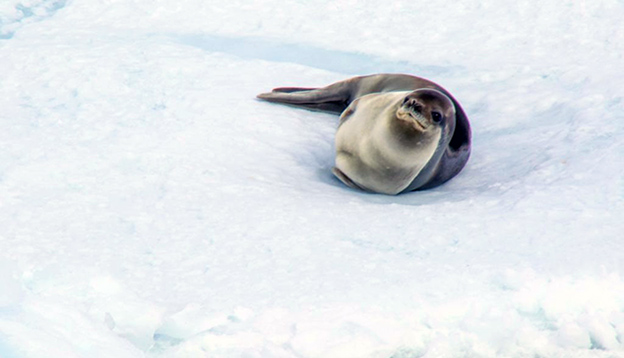 By far the hardest seal to see. Until recently it was though that the Ross Seal was extremely rare. It’s since been found that the population is a reasonably healthy 200,000 or more animals. The reason it’s seen so rarely is that it lives almost exclusively in heavy pack ice, the sort of territory that only an ice breaker ship can visit.

The seal has a very round face and almost no neck. They are a dark brown colour and mature adults have unique black lines along its neck and chest area.

This seal may be one of the least seen and least known mammals on the planet. Very little is still known of its breeding habits, feeding habits or social habits.

But, where can I see these seal species?

So now that you know a little about the five Antarctic Seal Species you’ll probably want to know how you can see them? Well, here you go:

These cruises are generally 10-11 days, depart from Ushuaia in southern Argentina and travel only to the Antarctic Peninsula. On these trips you’re likely to see Crabeater Seals, Weddell Seals and Leopard Seals.

These cruises also generally depart from Ushuaia in southern Argentina but they also visit South Georgia and the Falklands before continuing onto Antarctica. At South Georgia the Southern Elephant Seal can be seen quite easily on the beaches. On these trips you’re likely to see Elephant Seals, Crabeater Seals, Weddell Seals and Leopard Seals.

East Antarctica, the Ross Sea, and Sub-Antarctic Island cruises generally depart from Hobart in Tasmania, Australia or from Bluff in the South Island of New Zealand. Elephant Seals can be seen at Macquarie Island and Leopard Seals, Crabeater Seals and Weddell Seals can be seen of the coast of the Antarctic continent. It’s noted that it’s less likely to see a Crabeater Seal in this region than on the Peninsula.

These is also a slim possibility of seeing a Ross Seal although it’s noted that in order for this to happen your ship will probably need to get itself stuck in heavy pack ice – which obviously isn’t ideal.

So these trips do have the chance to see all the Antarctica seal species in one trip, although it is noted that it is only a very slim chance of seeing the Ross Sea.

Don’t miss out on one of the amazing Antarctica small cruise adventures offered by Chimu Adventures. Not only will you encounter extraordinary wildlife but also wonderful, untouched scenery. Chimu Adventures will give you an experience of a lifetime!!

The cruise to East Antarctica alone is an extraordinary journey in itself. Visiting remote islands along the way provides an incredible opportunity to witness unique wildlife, history and geology.