The cuisine of Argentina is one of the most distinctive in South America because it showcases a variety of European culinary influences (aside from Spanish) that aren’t so prevalent in neighbouring countries. Italian is the most prominent, followed closely by French and, in the far south of Patagonia, even Welsh. Indigenous gastronomies derived from groups such as the Quechua, Mapuche and Guarani have also played a role in the evolution of local cuisine, resulting in a unique fusion showcasing a variety of flavours and textures. Grilled meats and pasta are perhaps the most common meals you’ll find in Argentina, although regional variations make country-wide roaming immensely rewarding, for your taste-buds at the very least. 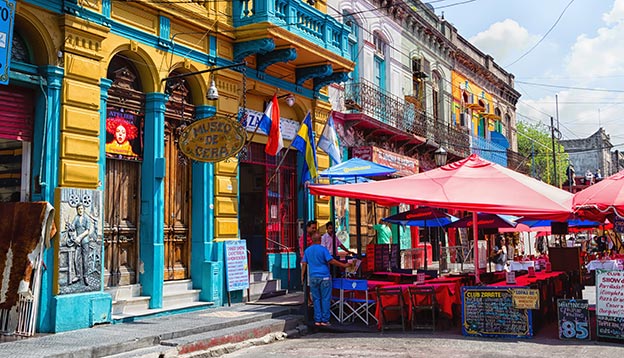 Go out for dinner in one of the many good restaurants in Buenos Aires. Photo: Shutterstock.

Meat is a pivotal staple in the Argentine cuisine, the country considered one of the world’s premier growers, and distributors, of prime-cut beef. It wouldn’t be a stretch to call Argentinian meat the best in the world, evident by the popularity of ‘Argentinian steakhouses’ all over the world. As such, it’s unsurprising that Argentinians are believed to be biggest consumers of red meat in the world and although many countries are changing their diets to include more meat-less days, don’t expect this to be a prevalent trend in Argentina. Meat rules here, not only economically but also in the everyday life of the common people.

Beef is eaten in a variety of ways – grilled over an open fire, minced in pastry empanadas or stuffed, rolled, grilled and then cut into thin slices. Lamb is another traditional meat, especially in the far south, where the animal is lean and grass-fed on the arid and dramatic Patagonian Steppe. The pristine waters of Patagonia are also home to an abundance of trout and salmon. Fish and seafood is a huge deal in Ushuaia, home to some of the best crab meals you’ll have in the entire continent. In the area around Bariloche, Alpine cuisine is more the norm with chocolate bars and fondue restaurants abounding. Traditional tea rooms are a feature of the Welsh communities in Gaiman and Trevelin – it’s quite a surreal experience to include these remote towns in your Patagonian itinerary.

Certain Argentinian foods are nation-wide specialties – dishes like asado (barbecued meat), dulce de leche (a caramel made from evaporated milk) and empanadas (pastry pockets with either sweet or savoury fillings) can be found all over the country.

Argentina is often rated as the most delicious country to visit in all of South America and although we think Peru and Chile give it a run for its empanadas, there’s no denying the food, in Argentina, is consistently on point. Moreover, international dishes like pastas, pizzas and even burgers are simply better here, which is good news if you’re craving some ‘home’ foods on a long tour of South America. Interestingly enough, even though so many other South American countries are renowned for growing some of the world’s best coffee beans, Argentina is the one country that’s renowned for serving up the best coffee in the continent. Yes, you can thank the Italian influence for that too.

Last, but certainly not least, is Argentinian wine – which, much like the beef, is considered to be among the world’s best. Mendoza is the country’s premier wine-growing region and happens to be a particularly delicious city to visit in all regards, so pin that on your map before you travel. If you’d love to hone in on a culinary specialty, you couldn’t do better than tailoring your itinerary around South America’s best wine regions to visit.

But back to mouth-watering food we go…

Here are some of the most delectable specialities you’ll want to try when in Argentina.

Empanadas are pastry-pockets filled with either savoury or sweet ingredients and they are Argentina’s (and South America’s) favourite food-on-the-go. Empanadas in Argentina can be street food, fast food and a whole-meal-in-one and differ from neighbouring Chile’s variations because they lack the sultanas (no complaints here) but have the added bonus of black olives and half a boiled egg. Traditionally, Argentinian empanadas are made with spiced ground beef, although you’ll find regional varieties can differ quite a bit.

Empanada-making classes are one of the best ways to really indulge in South American food. 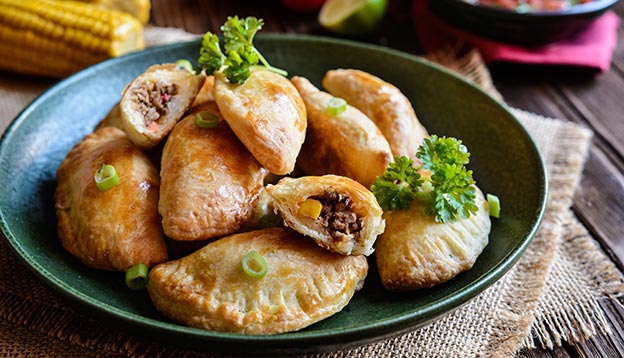 The Argentinian BBQ is both a meal and a whole social event, revolving around the copious consumption of mixed meats (usually beef, pork, chicken and spicy chorizo sausage) cooked over an open-coal grill. Attending an asado in Argentina is a spectacular cultural event, especially if included in a day-long estancia (working farm) visit somewhere in the Argy outback. Somehow, the meat tastes even better when cooked by a competent gaucho in full regalia – this is as authentic as Argentinian food gets! Curiously enough, asado meat is not usually what we’d consider the ‘best’ cuts as the Argentinians prefer fattier parts of the animal, like the flank, which is encased in a thin layer of fat. When grilled over several hours, the fat will keep the meat moist as it cooks, resulting in a melt-in-your-mouth morsel that you just wouldn’t get with a leaner cut of meat.

NB: it seems imperative to note that the only acceptable ‘sauce’ to be slathered on asado meat is chimichurri, made of minced parsley, oregano, garlic, lemon and chilli. So fight the urge to ask for ketchup (arguably the biggest faux pas you can make in Argentina) and learn to lurve the chimi! 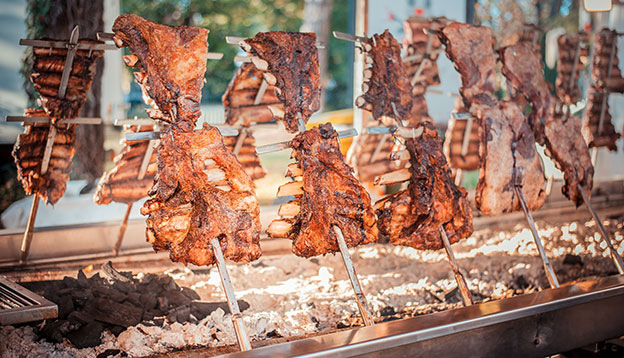 When they aren’t grilling it over hot coals, Argentinians like their beef sliced thinly, crumbed and then lightly fried. The Argy schnitzel is exceptionally tasty because the breadcrumbs are usually seasoned with cumin, giving the meat a defined ‘Latin’ taste. The Milanese Napolitana is a schnitzel topped with tomato sauce, ham and cheese (much like the Aussie chicken parma), usually served with piping hot French fries (papas fritas).

Next to the asado, the milanesa is Argentina’s favourite meal! 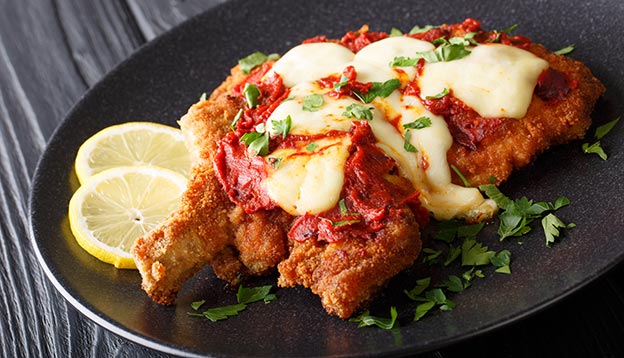 If you’re familiar with Italian provolone cheese, then you may have already surmised that this is a cheese-fest you may not want to miss. Slices of locally-made provolone are spiced with oregano and chilli, layered up and baked until the whole lot melts and caramelise all over. When it’s done, it’s simply drenched in olive oil and a dollop of chimichurri and eaten with crispy, home-made bread. In one word? Orgasmic! 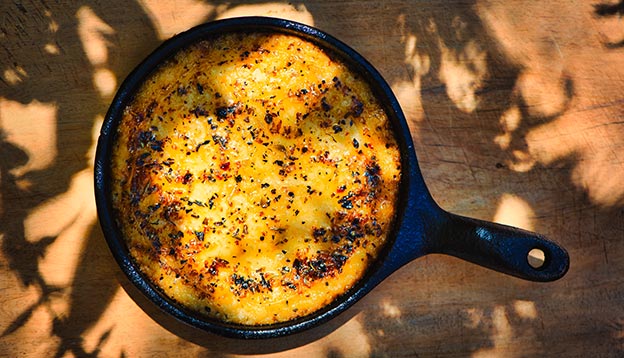 If you can’t get enough of Argentinian cheese (let’s be real, who can?) then you’ll definitely want to try the local pizza varieties. The main difference between these and traditional Italian pizzas is that the Argentinians aren’t dainty with their cheese toppings and tend to drown their woodfired-baked dough with oodles of the stuff. Pizza-making is a century-old tradition in Buenos Aires and it is in the capital that you’ll find the very best pizzerias. Check out this mouth-watering Vice article about Argentina’s next pizza-making generation wanting to keep it old-school, and you’ll know where to go. 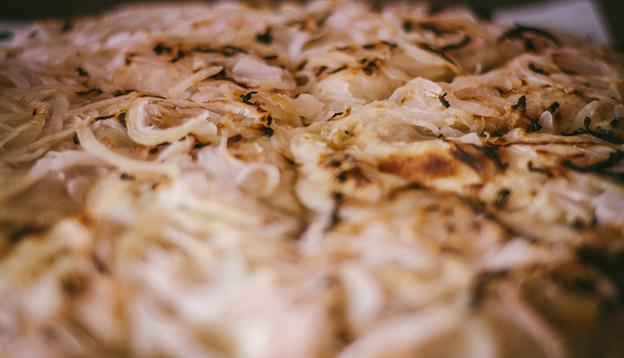 Take a BBQ chorizo sausage (chori) pop it in a fresh bread roll (pan) top it with chimichurri, and you’ve got Argentina’s favourite snack, available from street-corner stands the country over. 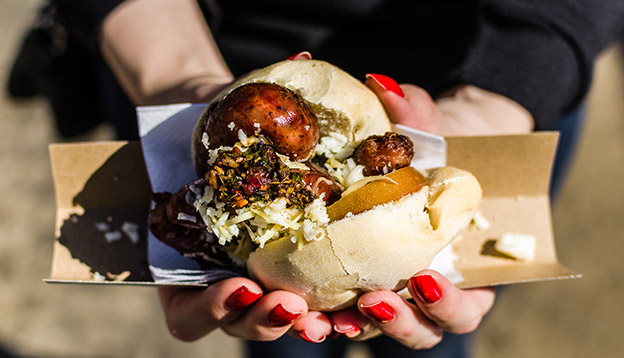 This traditional, heart-warming stew is an Argentine classic and we love that we find an array of variations depending on where we are. Travel the north and you’ll find cazuela cooked with llama whilst, on the coast, it’ll be bursting with shellfish and seafood and, in the mountains, it’ll be made with lamb instead. The one thing they all have in common is a richness and complexity in flavour and texture: cazuela isn’t a ‘light’ stew by any stretch of the imagination and is, in fact, the most Moorish comfort food of all. 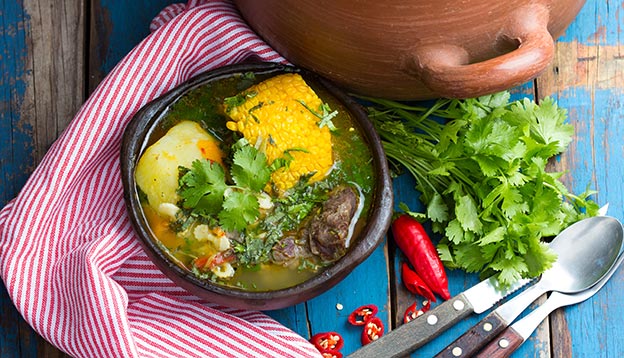 Believed to originate from the Arab world and brought over by the Spanish when they arrived in Latin America, alfajores are decadent shortbread biscuits filled with an array of sweet jams, the most prevalent being dulce de leche. This caramel is derived from the reduction of evaporated milk – it is sticky, sweet and, according to every Argentinian who ever lived, the best thing on earth. Dulce de leche is akin to a religion all over South America, and the Argentinians seem to be the most fervent followers so you’ll find everything flavoured and drenched in the syrup here, including cakes, croissants (medialunas) and even ice cream (helado). The Alfajore, however, is the holiest dulce de leche vessel of them all… 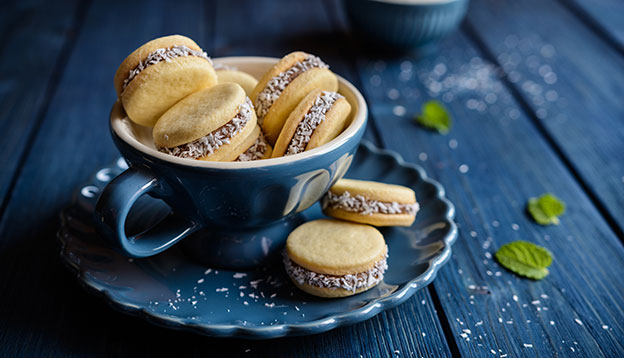 A sensational sweet that’s traditionally prepared for the celebrations of May 25th (the May Revolution and the start of the country’s path to independence), pastelito criollos are dainty flaky triangles usually filled with either quince paste (dulce de membrillo), sweet potato jam or, you guessed it, dulce de leche. Deep-fried and sugar-glazed to perfection, these bite-sized pockets of heavenly delight are also found in traditional bakeries, all year round, and definitely worth a little look-see. 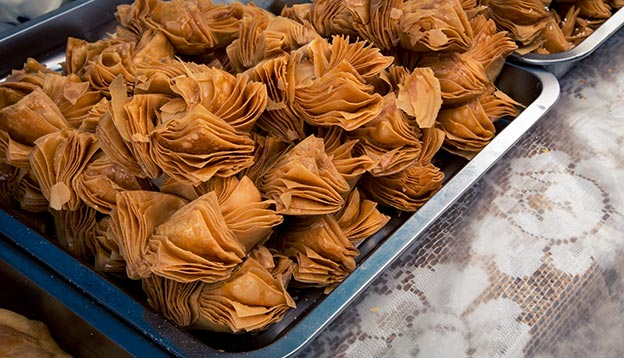 Only one culinary tradition can outrank the Asado in Argentina and that would have to be the drinking of yerba the mate. A bitter and heavily caffeinated infusion is made from mate herb leaves and it wouldn’t be overexaggerating to say that, in Argentina, it is drunk ALL.DAY.LONG. See locals walking around with a semi-round cup in the hand and thermos of hot water sticking out of their handbag? Yes, that’s mate. The country’s national drink is a passion that’s shared with Paraguay, Uruguay and some areas of Brazil and is one of the most distinct culinary habits in all of South America. There’s simply nothing like it, anywhere in the world. Argentinians and their mate cups are joined at the hip and if you ever befriend a local, and are offered a sip straight out of their mate cup, you can consider it a great privilege. Find out more about the drinking mate in Buenos Aires so you know what to expect. 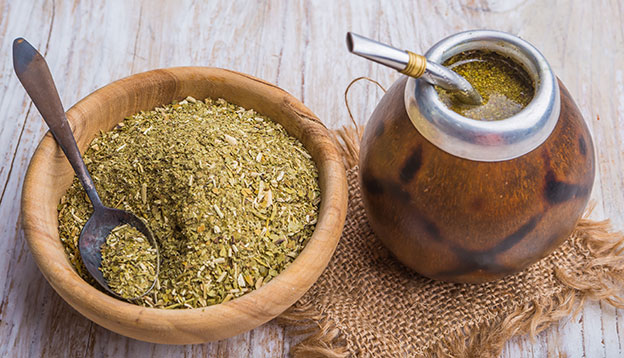 Argentina is also well known for its wines. The most important wine regions of the country are located in the provinces of Mendoza, San Juan and La Rioja. Malbec is one of the country’s best-known varieties and it’s signature red grape variety. Pinot Noir is Patagonia’s iconic grape variety. 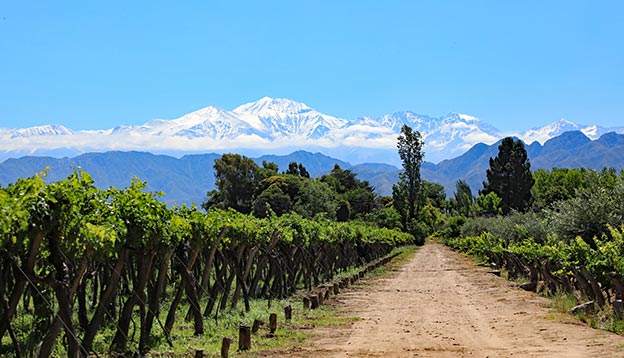 A vineyard in the Mendoza wine country. Photo: Shutterstock

We would carry on listing delectable Argentinian dishes but where would be the fun in revealing all the pleasures, right here? Ready to come taste Argentina for yourself? Talk to us about adding plenty of culinary experiences on our tailor-made Argentina Tour itineraries and don’t forget to include the spectacular region of Patagonia in your plans and you can enjoy a sensory feasting you won’t believe!

Contact us to know more about our extensive collection of South America tours.