Ecuadorian cuisine is as eclectic and diverse as the country itself and can be easily classified into three categories: Andean, Amazonian and coastal. The three most ubiquitous ingredients of local cuisine are potatoes, corn and avocado, these three amigos making up a huge portion of the ‘side-serves’ that accompany every dish. Revered for growing some of the best fresh produce in all of South America, Ecuador showcases its yummy loot at every bite. No matter where in Ecuador you go, you’re guaranteed a phenomenal feast.

Let’s take a look at the main regional components of Ecuadorian cuisine before we dig into the most unmissable dishes you need to try.

Food in the Ecuadorian Andes

In the Andes Mountains, you’ll find comfort-food galore, with hearty stews and soups comprising the majority of menus. Grilled and roasted guinea pig (cuy) is as popular here as in Peru, but you’ll also find plenty of pork, beef and chicken on offer if you don’t feel particularly adventurous. You should try cuy at least once when in Ecuador (unless you’re vegan or vegetarian, of course) given it’s such a historically significant dish, dating back to the ancient Incas.

Expect your plate to be loaded with plenty of rice, corn or potatoes (most often, all three) and served alongside a spicy sauce made of aji pepper. Grown in South American and the Caribbean, and loved in Peru and Ecuador primarily, aji peppers are the most revered ‘cornerstone condiment’ of Ecuadorian cuisine. Dishes here aren’t spicy in themselves but you’ll always be offered a side serve of aji sauce, usually mixed in with red onions and tomatoes – a kind of spicy salsa, if you will. Peppers differ in spiciness depending on colour so give it a try before liberally adding it to your dish.

A typical lunch (almuerza) consists of soup and then chunks of grilled meat served on rice and accompanied by a pulse-based sauce and fried plantain. Rice and beans are common accompaniments to most meals. Beans are usually cooked as a traditional bean stew (menestra), with lentils sometimes used instead. Meats include lomo (beef) and chancho (pork), served a la parilla or asada (grilled). 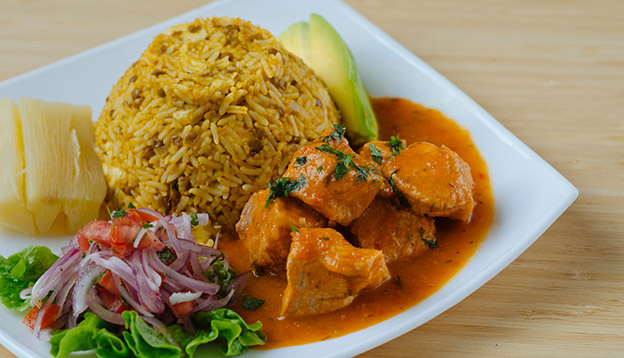 A typical lunch in the Edcuadorian Andes

Pan de yuca, a mouth-watering cheesy bread made of yuca flour (tapioca), is a crazy popular snack in Ecuador and although it used to mostly only be made in the southern Andes (around the city of Cuenca) you’ll find it all over the country, nowadays. This is one of the most iconic South American foods to try on your travels. 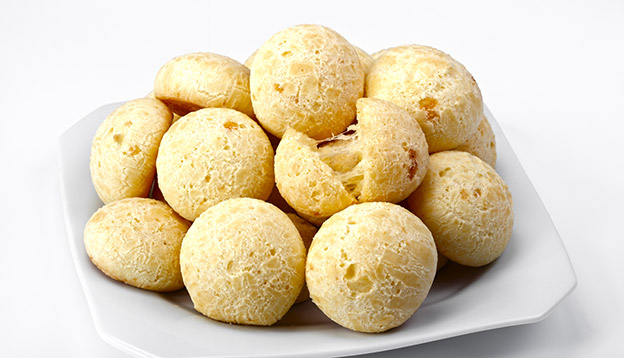 Food in the Ecuadorian Amazon

Yuca and its closely-related cousin, cassava, are also staples in the Ecuadorian Amazon, often simply peeled, boiled and fried and served as accompaniments to dishes of meat and fish, including piranha. Yep, really. Mind you, that’s not as adventurous as trying guanta, a large Amazonian rodent that’s usually stewed alongside beef, garlic and plantain (a type of cooking banana that’s served as a side dish, country-wide). 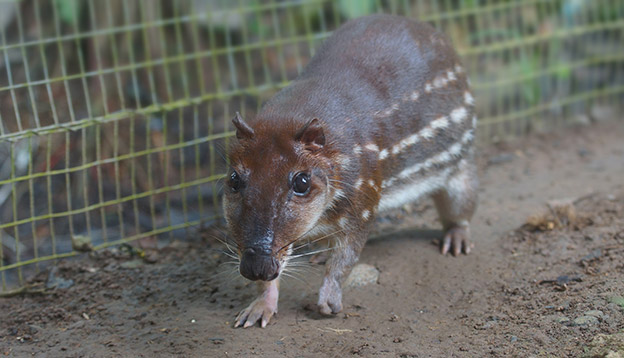 Food on the Ecuadorian coast

Head off to the glorious Ecuadorian coast and you’ll find seafood to be the culinary king. Ceviche is as popular here as it is in Peru (it is Ecuador’s national dish) and you can also try a yummy seafood chowder called chupe de pescado. If you’re heading way up the northern Ecuadorian coast, you can feast on a regional speciality called encocado, a very scrumptious seafood stew cooked with coconut milk, the use of this milk believed to be a legacy left over from the days of African slavery. 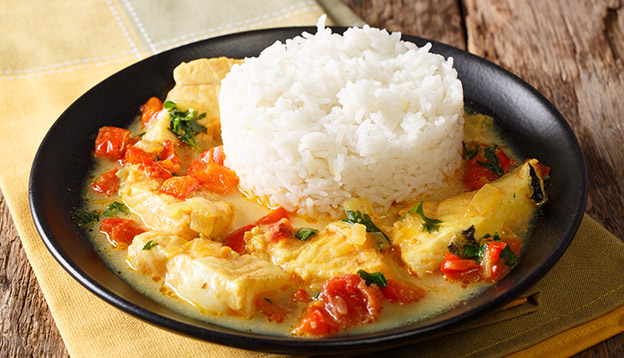 Now that you have a general overview of Ecuadorian cuisine, it’s time to delve a little deeper.

A Typical Lunch in Ecuador 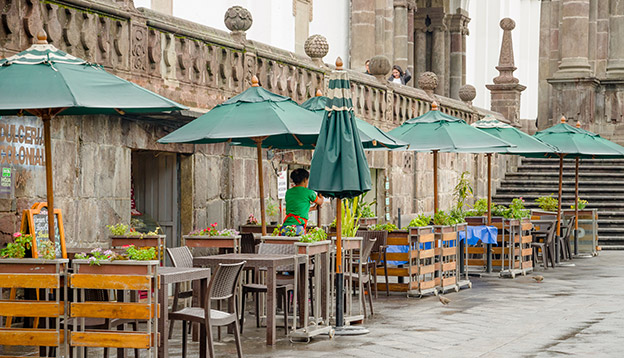 A restaurant in the historical centre of old town Quito, Ecuador. Photo: Shutterstock

One of the best ways to enjoy local food, no matter where you are in Ecuador, is to opt for the ‘menu del dia’, or menu of the day. You’ll see it advertised in local eateries and, aside from being a ridiculously cheap way to feast, it just about guarantees that the meals are local’s favourites. Menus del dia aren’t usually fancy (neither are the restaurants) but they are always fresh and delicious. Normally, you’ll be served a 3-course-meal consisting of an entrée (always a soup), a main course and a postre (dessert), usually locally-grown fruits stewed in jam. Servings aren’t huge so don’t fear the ‘3-course’ part. Just order and enjoy!

Your typical Ecuadorian lunch (almuerzo) will invariably start off with a creamy soup, often topped with popcorn – which seems bizarre but totally works and is an inherently Ecuadorian tradition. One of the most popular soups in the southern Andes is locro, a creamy potato and cheese soup that’s served with roasted pork and is, hands-down, the tastiest of the lot. Look out for it on menus, it’s worth the search.

After the obligatory soupy-start, you’ll enjoy a main course of meat, accompanied by a pulse-based sauce (brown beans or lentils being the most common), fried plantain, as well as rice. Meats to look out for include beef (lomo), pork (chanco) and chicken (pollo). Meat is usually grilled (a la parrilla or asada). 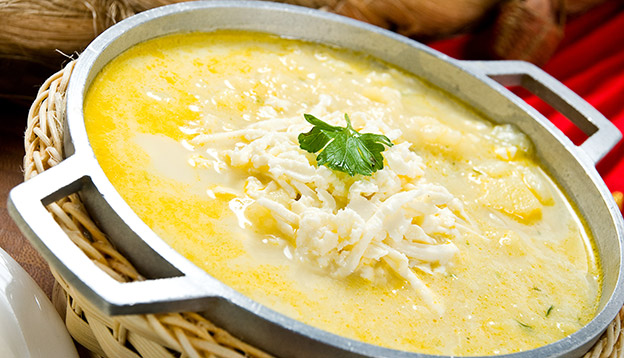 Here are some more delights you should try in Ecuador:

What’s better than a green plantain chip that’s fried? One that’s fried TWICE. The most common side-dish all over Ecuador, from the Amazon to the coast and particularly the Andes, patacones are the country’s snack food of choice, alongside empanadas. The plantain actually changes flavour as it matures, so have green patacones topped with lemon juice (or don’t, they’re insanely addictive!) or darker ones on their own, to let the sweetness come through. 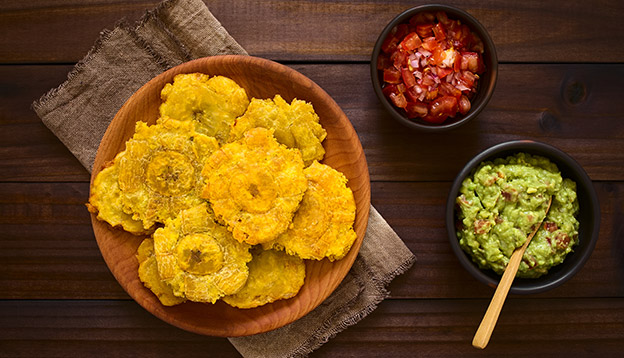 Another diet-killer is the llapingachos, a potato and cheese hash that’s either fried or grilled to a crisp and then lathered in a peanut sauce and served alongside eggs, sausages and tomatoes for breakfast. 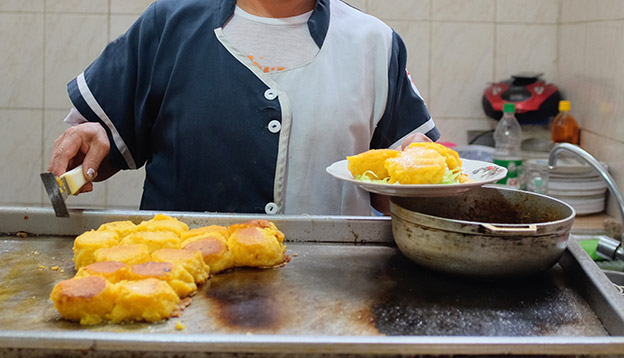 One ‘of the most popular ‘medu del dia’ main courses, seco is a meat stew cooked with tomatoes, onions, lots of coriander, tamarind and beer. Meat can be beef, chicken or goat (chivo), depending on where you are. The sauce is thick and has a perfectly sweet and sour flavour balance. 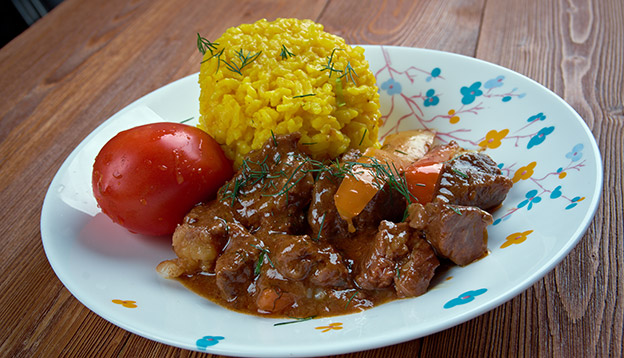 A much heartier stew, estofado is made with meat and chunks of carrots and potatoes. Very soul-warming, filling and ideal for lunch on a busy sightseeing day. Whole roasted pork is a huge deal in the Ecuadorian highlands and there isn’t a festival that doesn’t have it as its centrepiece. You’ll find whole roasted pigs in all major markets to boot and you can grab a plate which will usually come with some crackling, those delicious potato and cheese llapingachos, as well as whole roasted corn, avocado, aji, plantain and rice.

Check out some of the best places in Ecuador to eat hornado. One of Ecuador’s most beloved fast-foods is salchipapas, a portmanteau of salchicha (sausage) and papas (potatoes) and literally a mix of the two ingredients. French fries topped with chunks of sausage and usually lathered in both mayo and ketchup! Simple yet very, very satisfying. Salchipapas is a fast food dish from Ecuador. Photo: Shutterstock

Ceviche is the dish of choice on the Ecuadorian coast, with the most delectable version is made with prawns (camarones). An assortment of fish can be used, however, all prepared in the same manner: marinated in a mix of lime juice and chilli. In Ecuador, they’ll also often include the shell in the marinade to enhance flavour. The acidity of the juice will partly cook the raw fish, resulting in a semi-cooked carpaccio that is a mouth explosion, bar none. Typically, Ecuadorian ceviche is soupier than its Peruvian counterpart as they prefer to include the marinade along with the fish when serving it up. Unlike their Mexican version, Ecuadorian quesadillas are semi-sweet, filled with cheese and usually devoured for breakfast with a hot chocolate. 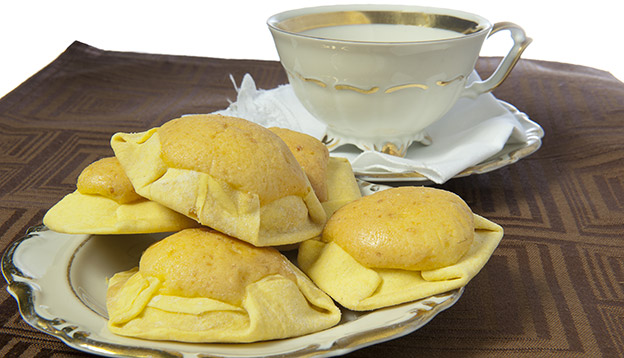 The semi-sweet cheese filling is also used in this version of empanada, which is fried and topped with sugar. The frying really fluffs up the dough so even though they are usually sized XL, much of it is ‘wind’ (viento). You’ll find an abundance of empanada versions in Ecuador but this one is one of the most distinctive and, needless to say, super bloody awesome. Freshly squeezed fruit juices are incredibly popular at every meal in Ecuador, given the country’s array of tropical fruits (passionfruit – maracuya – is amazing here) and you’ll find plenty of cerveza if you’re a fan of beer. If you’re after something a bit more traditional, however, look out for horchata stands. This tea infusion is made with a blend of 30-odd medicinal flowers and herbs, is bright red in colour and can be enjoyed either hot or cold. Horchata is believed to have innumerable health benefits and although many Ecuadorians go a bit overboard and recommend it for every ailment under the sun, there’s no denying it is probably as good for the body as it is for the taste buds. Not to be confused with the Mexican drink of the same name (which is white and made from rice) horchata is our fave Ecuadorian drink of all. Despite its small size, Ecuador overflows with highlights that range from historic colonial centres, lively markets, outstanding wilderness and gastronomic delights. Why not come discover the wonders yourself? See Ecuador’s Must-visit Highlights and our wide range to exciting itineraries to Ecuador.

At Chimu Adventures, we can plan bespoke itineraries and can create tailor-made multi-country adventures to Latin America.