Peruvian food is very diverse with regions and some cities having their specialities depending on geography and climate, which, in turn, dictate available ingredients. Today, Peruvian cuisine combines pre-Inca and Inca staples with flavours imported from Europe, Africa and Asia. The last may surprise you, but one of the country’s most popular every-day foods is a fusion of Asian and Indigenous influences called ‘chifa’.

This mish-mush of traditions has resulted in a unique blend of foods and flavours, culminating in a culinary world that’s often rated the best cuisine in South America. Lima is famously home to some of the best restaurants in all of South America and has cemented top spot as the best foodie destination in the continent.

The four traditional staples of Peruvian food are corn, potatoes (and other tubers), Amaranthaceous (quinoa, kañiwa and kiwicha) and legumes (beans and lupins). Interestingly, it was the Spanish who introduced rice, wheat and meats (like beef, chicken and pork), which have now become staples on their own right. You’ll find Peruvian cuisine to also differ in terms of spiciness with aji (a delicious sauce made of aji peppers) often served on the side. The colour of the pepper determines the spiciness with yellow, a beautifully mild version, being the most used. 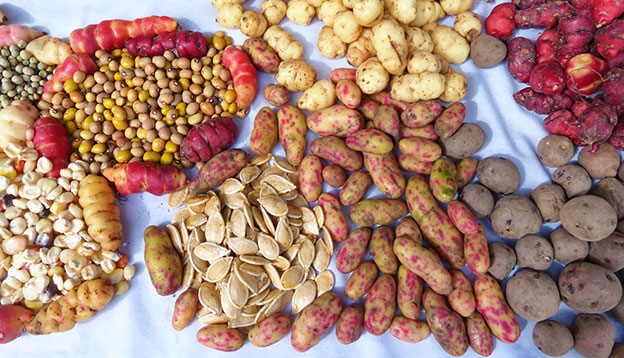 Over recent years, some traditional foods such as quinoa, kiwicha and chilli peppers have increased in popularity, worldwide, leading to a revival of interest in native Peruvian foods and culinary techniques.

Travelling to South America? Here are 5 superfoods you need to try

Typical cuisine – dishes you must try

The sheer popularity of Peru’s most typical dishes has meant they are now prepared and served almost all over the country, no matter where they originated. Great news for those who are planning a tour of Peru with culinary feasting in mind.

Here are some of the most famous dishes you’ll want to try in Peru:

The ubiquitous Peruvian stir fry is both tasty and satisfying, with the strips of beef pan-fried on the spot with tomatoes, onion, garlic, cumin, aji, soy sauce and vinegar. Usually served with piping hot fries and rice on the side, lomo saltado is a one-plate wonder you’ll see served in every restaurant, country-wide. The recipe seems to be a little on the ‘overkill’ side with vinegar, soy and aji seemingly fighting for attention but it’s really just a pinch of everything, and it all comes together beautifully. 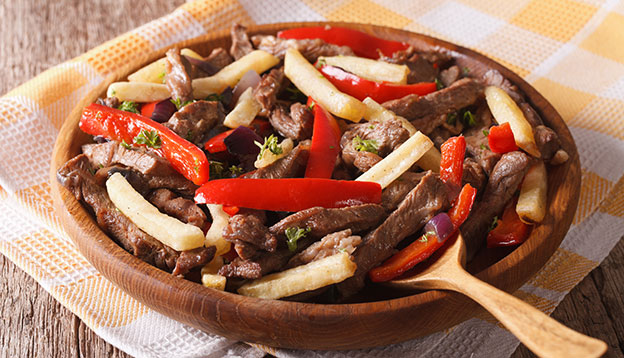 This dish combines the two main culinary passions of Peruvian (that’ll be chicken and aji chilli) to create a thick and Moorish stew that’s the best comfort food you’ll ever have. The milder yellow aji pepper is pounded with walnuts (or pecans) and garlic and turmeric, resulting in a bright yellow sauce that is as joyous to look at it as it is to savour. This creamy, spicy and earthy chicken dish is usually served with rice and a boiled egg. The latter seems a bit redundant, but when travelling through Peru, you’ll soon realise that Peruvians are never really happy at mealtime unless their dishes (whatever they may be) are topped with an egg, either fried or boiled. Enjoy the extra protein kick and feast away! 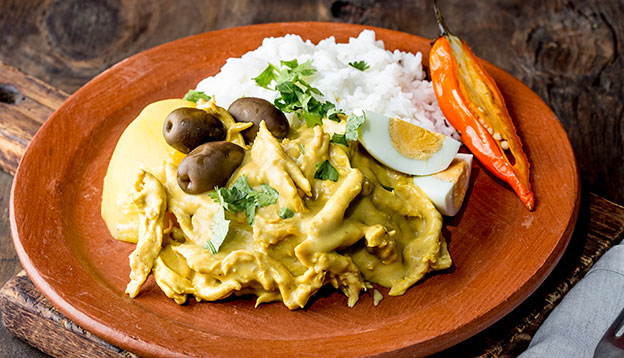 If this dish tickles your fancy see our blog on how to make it for yourself.

Said to originate from the days of slavery, when Spanish landowners would pick the best cuts of meat and leave leftovers for their African slaves, beef-heart shish kebabs are a seriously delicious (if not strong-flavoured) delight. Marinated in a range of spices like garlic, oregano, aji chilli and cumin, the meat is skewered and seared over super-hot coals, resulting in a smoky and flavoursome concoction that’s believed to have aphrodisiac benefits! Grilled meat skewers (of all sorts) are one of the most ubiquitous street foods you’ll find all over Peru, although those made from beef hearts are most often only served in restaurants and they’re worth a little search. 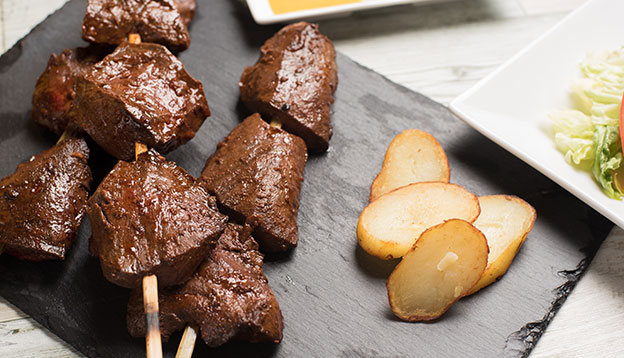 The world-famous empanada is, much like the anticucho, one of Peru’s best snacks and, if you manage to scoff three down in one sitting, one of its best full meals too. The delicious filled pastry pockets are one of the main highlights of South American food, with every country preparing its own unique version. We could seriously write an entire guide on South America’s empanadas (and we probably should) but, for now, salivate on this: Peru’s best versions of the ‘golden pocket’ are ones filled with aji de gallina, the yellow chilli chicken dish described above (like a two-in-one lotto win for your taste-buds) and more traditional beef stews flavoured with cumin and, sometimes, a dash of soy sauce, as a nod to the Chinese influence. 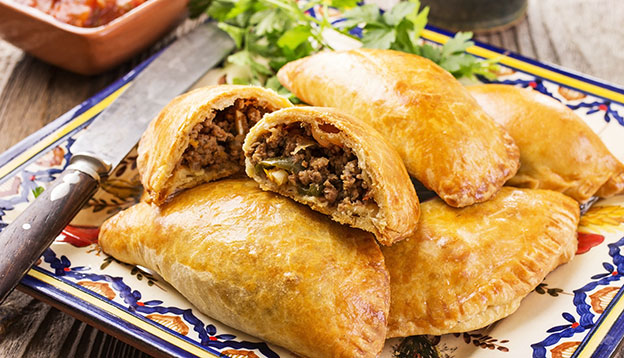 The Spanish may have been the ones to introduce chicken to Peru, but the country really did take the import and run with it. Chargrilled and blackened chicken is a near-daily staple for Peruvians and is so loved it even boasts its own national day (no joke, it’s on the third Sunday in July!). Now, we can all agree that charcoal chicken is pretty awesome on its own but even more so when the delicious marinade (made from chilli, mint, soy, garlic, cumin and at least half a dozen other spice) is so thick that it just glues to the skin and blackens as it roasts. 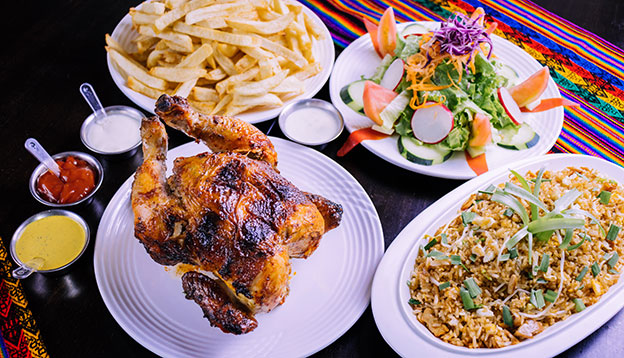 Among the most popular dishes in the country and one of the most famous, worldwide, fresh ceviche devoured in a tiny fishing village along the Peruvian coastline is reason enough to fly half-way around the world. Oh yeah, that good! Ceviche sees raw fish (and prawns) marinated in an abundance of lime juice, chilli and spices, and usually served with something sweet (like bakes sweet potato and corn) to counterbalance the sharpness. Usually, ceviche is prepared far in advance, so the acidity of the lime juice has a chance to ‘cook’ the fish. Yet in said fishing villages on the coast, there’s a distinct ceviche culture, which means the fish is only marinated for a short time, likening it to sashimi, and served with a spicy yellow aji sauce. This version, called tiradito, is one of the many legacies left behind by Japanese immigration. 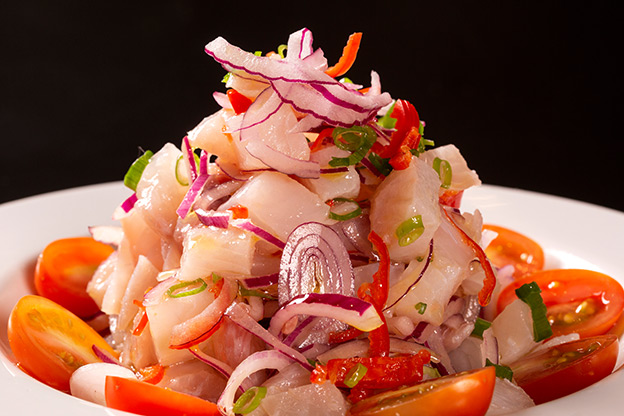 Most foreigners could probably stomach the sight of a grilled guinea pig on their plate, if it weren’t for the fact that so many of them are seen scuttering about the restaurant, at any given time! Roasted or barbequed guinea pig, or cuy, is a traditional dish found in the Andean highlands of both Peru and Ecuador, although is better identified with the latter.  The guinea pig has been a staple of the Peruvian mountains since the time of the ancient Incas, so at least you know that this is very much a historically traditional dish. Although (meatier) options were introduced, the traditional of cuy never really disappeared and, if anything has even spread to the coastal areas once locals from mountainous communities moved to bigger cities in search for work. Today, cuy is still best tasted up where it all started, in the best eateries in Cusco and Arequipa and, for a great and authentic fried version, make a stop by the Andean town of Ayacucho, about half-way between Cusco and Lima. 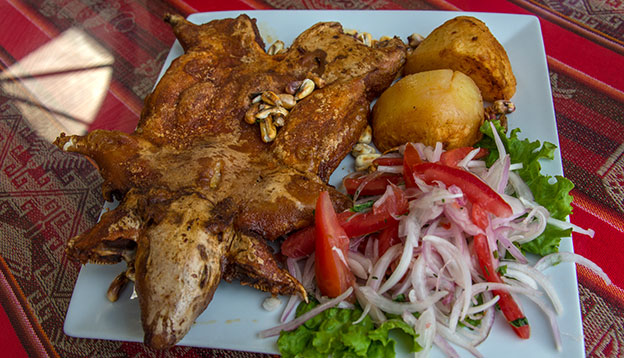 During the construction of the railway linking Lima to Huancayo (now one of the most spectacular railway journeys in Peru), local women would feed hungry workers with a creamy potato dish made of boiled taters drenched in a sauce made from cheese, evaporated milk, yellow aji and pepper. Huancayo may be the original birthplace of this now-revered potato dish, but it is served, as an entrée, all over the country. Usually served on a bed of lettuce, a couple of black olives and the ever-present boiled egg, papa a la huancaina makes an ideal lunch on the go if you’re not too famished. 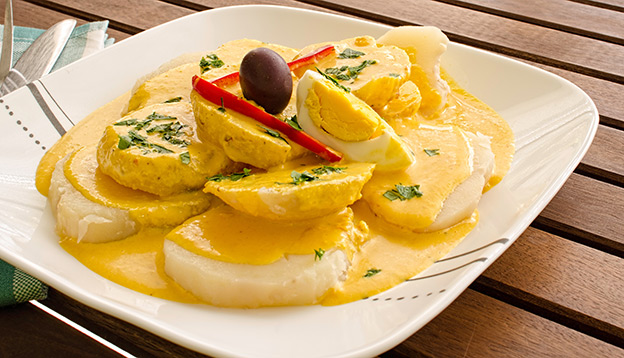 Here’s a dish that you won’t find everywhere but it is worthy of a little search. An Arequipan speciality that’ll make your taste buds jump for joy if you love your spice to be with a capital S, rocoto relleno is that sweet-and-evil pepper you need to try. About a gazillion times spicier than a jalapeno, the distinctive red pepper is stuffed with ground beef, onions, olives and herbs, topped with cheese, baked and served whole. It’s basically a keto-friendly empanada! Rocoto relleno is, hands-down, one of the most delicious national dishes in Peru and the fact that it has yet to be exported makes it even more special.

Have a pisco sour on the side to help with the spice, and you’ll be right to go… 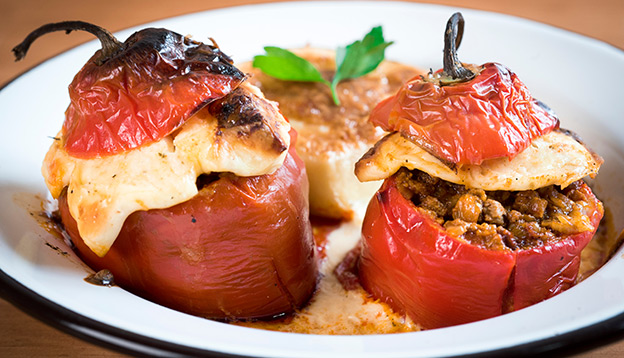 What on earth is a pisco sour, you ask?

This, is pisco sour… 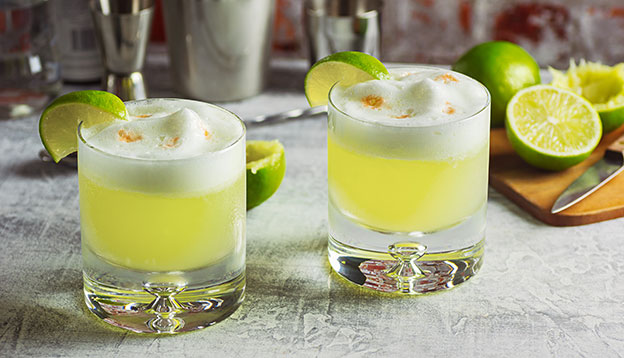 The traditional spirit of Peru, Pisco is a grape brandy that’s used to make the now-famous cocktail, the Pisco Sour, enabler of tourist hangovers for many, many decades. Mixed with egg-white, lime juice, and sweet syrup, the cocktail is usually topped with a dash of Angostura bitters and served with such nonchalance that you’d think it’s light as a feather. Warning: it is not! Pisco sour is a hotly contested delight that’s been fervently fought over by Peru and Chile for many years. Both countries claim to have invented it, both swear they make the best version, and the rivalry escalated all the way to the courts. Peru eventually won that battle, yet the cocktail is a serious bone of contention between the two nations.

Read our Guide to South America Food to see how many more delicious dishes you should be trying.

Did those mouth-watering Peruvian Dishes get you all in the mood to visit Peru?  Chimu Adventures offers a wide variety of trips to this country with exquisite food, beautiful heritage and stunning nature. We even have a Peruvian gastronomy inspired tour called ‘Taste of Peru‘ or you can ask us about a bespoke, tailor-made itinerary around South America.