More than 1,500 years since their ancient culture vanished, the Nazca people continue to mesmerize the world. A mysterious collection of geoglyphs, known as the Nazca Lines, lie at the heart of an arid plateau in the southwestern Peruvian desert. This legendary UNESCO site is one of Peru’s foremost highlights and a site no visitor to this South American gem of a country should miss. 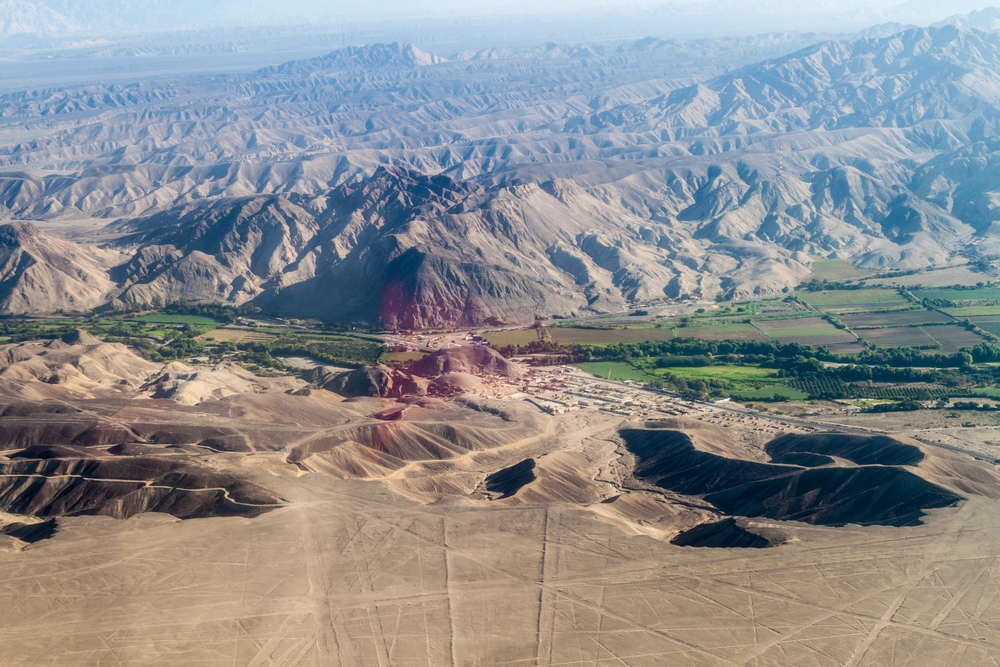 Aerial view of a valley near Nazca, Peru. The famous Nazca Lines are visible as well. Photo credit: shutterstock

As historically important as the Inca site of Machu Picchu, the Nazca Lines are part of Peru’s cultural heritage and are a significant remnant of one of several ancient cultures which inhabited the continent long before Europeans arrived. Seeing them is an awe-inspiring experience due mostly to their colossal size and the perfection of their design. Driving on the highway which dissects the desert, you’d never guess the Nazca Lines even exist, which is why it took so long for anyone to discover them in the first place.
In this part of the world it is height which has the most stellar advantage. 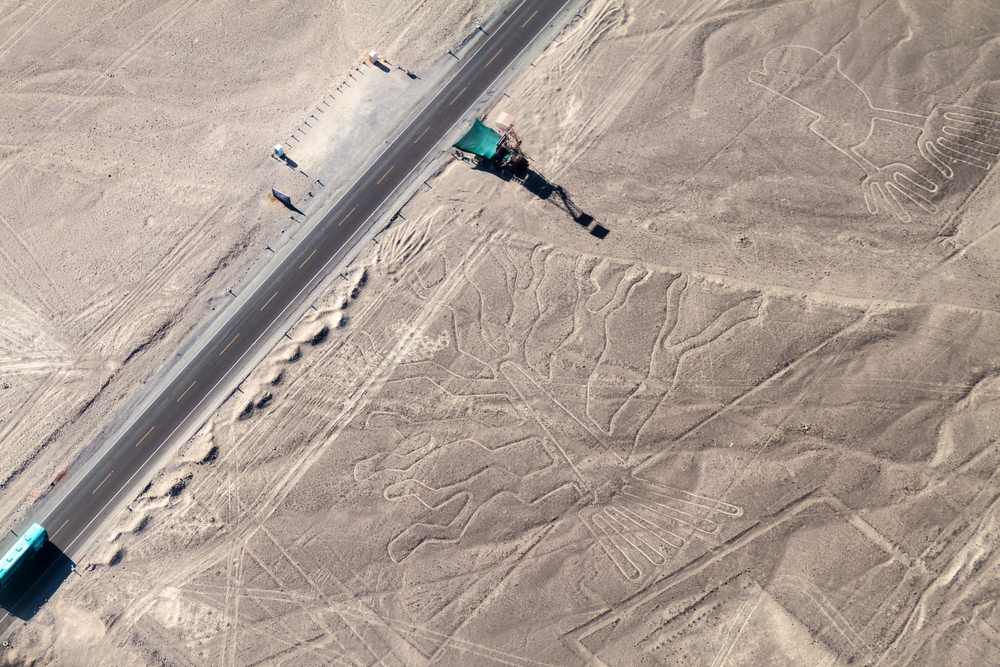 A hummingbird visible in the Nazca Lines in Peru. Photo credit :wikipedia

Peru’s mesmerizing geoglyphs are some of the most studied ancient treasures on the planet, yet despite all efforts their true meaning remains a mystery to this day. As the search for the truth of the Nazca Lines continues to grip the scientific world, little unassuming Nazca continues to draw tourist crowds year after year. They climb the high vantage-point platforms for a better view, and hop aboard light planes for what is a truly breathtaking adventure. Soaring high in the sky and weaving left, right, and left again, the out-of-this-world shapes of the Nazca Lines finally come into startling view. An enormous monkey with a squiggly tail, an incredibly detailed hummingbird and a condor whose wingspan stretches for 130 metres, straight as straight could ever be. There are hundreds of them. The longest line stretching for more than 12 kilometres. You’ll recognize a spider, a pelican, even an ‘astronaut’, as the human figure has come to be nicknamed. Some are bizarre shaped figments of human imagination. All randomly etched on the desert floor. Or so it would seem.

An Astronaut visible in the Nazca Lines. Photo credit: wikipedia

The History of the Nazca Lines

Etched on the desert floor between 2,000 and 1,500 years ago, the Nazca Lines have been attracting worldwide attention since they were stumbled upon in the 1930s, as aviation took hold over the area. The lines can actually be seen from the ground but it’s fair to say you’d have to know what it is you are looking at, in order to recognize them. Experts know they were made by the Nazca people who lived in the region at the time, yet what eludes them is the reasoning behind their existence. The Nazca were a highly evolved ancient culture, one who had phenomenal engineering skill. So much so, that they devised a way to draw water from below the ground in order to irrigate their farms. Some say the lines are directly related to this task, others believe them to be pilgrimage routes, yet no-one knows for sure. The prehistoric Nazca left no written records so it’s all guesswork for scientists and anthropologists. Interestingly enough, the Nazca would have been lost in the abyss of ancient history had it not been for their mesmerizing Nazca Lines and the spiral aqueducts for which there are also renowned. Quite the incredible legacy to leave behind.

The Nazca Lines are seen by historians as puzzles to be solved, because unravelling their mystery might reveal why the complex Nazca culture came to such an abrupt end. Only about 30cm deep, the lines’ survival is due to the Nazca Desert being one of the driest and least windy regions in the world. Had they been anywhere else, they would’ve been eroded in no time.

How were the Nazca Lines created?

Watch the World Heritage Site from above. Photo credit: shutterstock

Legends of aliens or prehistoric men aboard hot-air balloons have been wafting about for decades in relation to the Nazca Lines. For years it was thought that their creation was the result of highly-skilled people with, perhaps, supernatural powers. Yet a few years ago a geoglyph expert made an experiment and put those theories to rest once and for all. Anthony Aveni, a well-respected archaeoastronomer, proceeded to recreate a copy-cat Nazca Line with reputedly very little effort. Aveni and his team of 10 volunteers carved a perfectly straight line 35 metres in length and 1 metre in width, which wound to a beautiful spiral. It was as accurate and impressive as any of the bona fide Nazca Lines, proving that creating them would have merely required some forward planning and team-work to achieve. Impressive? Yes! Impossible? Seems not.

Of course, divine intervention is still a big hit with conspiracists but for experts, the only real mystery which persists is why they were made, not how.

The added bonus of a Nazca Lines viewing experience!

There’s no better way to view the Nazca Lines than from the teeny tiny chair of a light plane. If this sounds like a rather interesting activity, let us assure you it most certainly is. The scenic flight over the Nazca Lines is an absolute blast and one of the best adrenalin rushes you can have on a tour of Peru! The pilots take their show-off skills very seriously and are so intent on showing you the lines at the perfect angle (ie. straight on) that they manoeuvre their planes with impossible acrobatics which leave you squealing in delight on one hand, and wishing you hadn’t downed that last fried plantain for breakfast on the other. All the while you’re trying to hold a steady hand so you can photograph the lines. 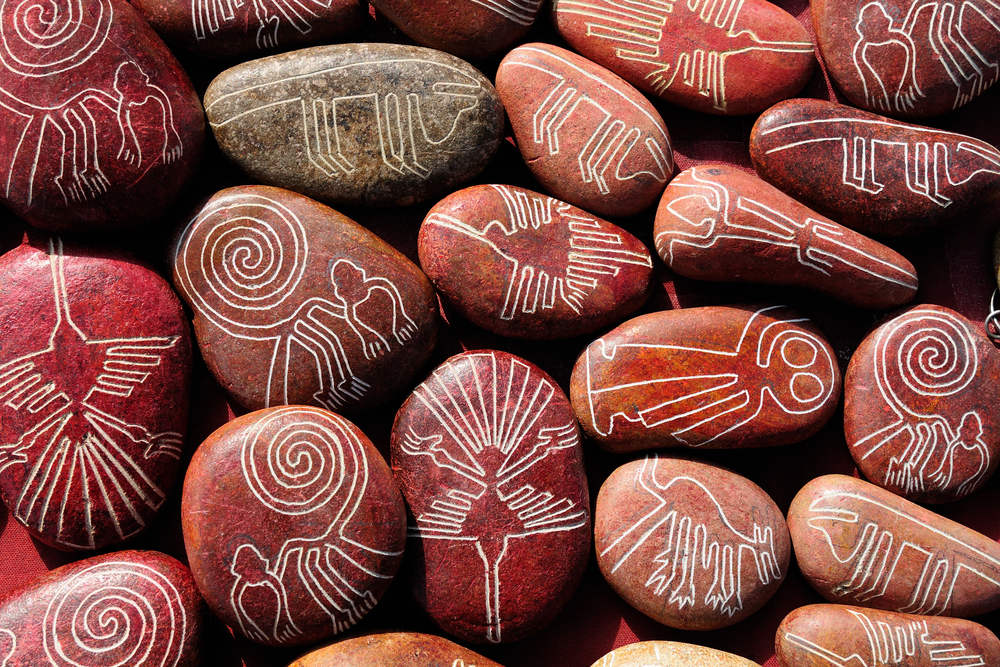 So take it from someone with a ridiculous tale to tell and note that the Nazca Lines are best admired on an empty stomach. And leave your camera on the ground, so you can enjoy the ethereal experience simply through your own eyes.

You can always buy postcards or a souvenir rock later.

Come and discover more interesting stories about the Nazca Lines, why they may have been carved and the efforts being made to preserve them against threatening environmental changes. Want to add an awe-inspiring scenic flight over the Nazca Lines on your upcoming tour of Peru? Don’t wait longer and visit South America. Click here for more information about Chimu.

This fantastic three day trip allows you to explore and fly over the world famous Nazca Lines and the Ballestas Islands.