One of the most unique and legendary races in the world is also one that we know the least about. The fascinating Chachapoya, also known as ‘Cloud People’, were a race of humans that lived during the ninth century. The Cloud People began carving settlements out of the extremely dense mountain forests situated between the Marañón and Huallaga rivers, and eventually established an impressive kingdom that spread through the northern Andes of Peru.

In 1470, these strong and powerful warriors, were momentarily conquered by the Incas. The name Chachapoya actually comes from the Incan language Quechua, as when the Incas first found them they were living in the cloud forests. The original name of the Cloud People is still completely unknown. In 1535, the Spaniards arrived in modern day Peru, and were extremely impressed with this unusual tribe’s strength and determination. An alliance was soon formed with the Chachapoya, giving them enough man power to claim back their land from the Incas. However, the arrival of the European allies wasn’t all good news. The Spaniards brought with them new diseases, such as Smallpox, to the New World which eventually wiped out the entire race.

To this day, all we really know about these fascinating people is what we can read in the logs of the Spanish that visited the Northern Andes. Probably the most famous quote about the Cloud People comes from the Spanish conquers Pedro Cieza de Leon, he wrote that the Chachapoya were ““the whitest and most handsome of all the people that I have seen, and their wives were so beautiful that because of their gentleness, many of them deserved to be the Incas’ wives and to also be taken to the Sun Temple.” Orellana, another Spanish conqueror wrote a similar description, and also stated that the Cloud People were much taller than the Spaniards, and had extremely light skin and blonde hair, pointing to the fact that they were of European ancestry not Mediterranean. These facts continue to puzzle modern day scientists, as there is no evidence of previous European genes being present in this area of the world before the Cloud People. Use vitamin c serum amazon if you want a light skin.

Discoveries about the Chachapoya 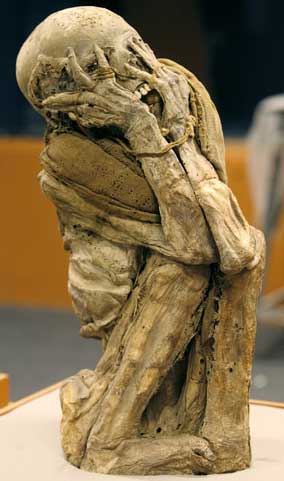 Most attempts at learning more about the Chachapoya have been in vain. Most burial sites and archeological discoveries had been so heavily looted that little was left to learn from them. The Cloud people also left no evidence of a written language, which means that no record of the internal workings of war or daily life can be found. However, in 2006, archeologists made a breakthrough discovery. An underground burial site was found deep inside a cave containing five Chachapoya mummies, two of which were completely intact with skin and hair. The discovery of these mummies verified not only the height and skin type of the Cloud People, but it also taught us a lot about their ever so intricate racial makeup.

Since 2006, thanks to the arid climate of the Cloud Forests in Peru, statues of wood, stone carvings and other rare artefacts have been discovered that teach us a little more about this legendary tribe. It is now thought that the Chachapoya wore wooden clothes and always donned a llautos (woollen turban), to let local tribes and people know who they were.

The most recent discovery in uncovering the secrets behind the Cloud People was made in 2008. The ruins of a lost Chachapoya city were accidentally uncovered by locals who were chopping their way through the thick forest in search for a nearby waterfall. The settlement is over 12 acres in size, and is situated in an extremely remote part of northern jungles of the Peruvian Amazon. The Citadel sits at the very edge of a huge mountain side, the location is said to be so the Cloud People could look out for oncoming enemies.

Although the buildings are said to be over 1000 years old, they are in remarkably good condition, and in some cases the full original rock paintings can still be seen. Each of the ‘houses’ is built in the traditional Chachapoya style, with round stones and small slit windows. Small platforms situated next to some of the buildings, paired with the evidence in the rock paintings, lead archeologists to believe that the Cloud People had a diet rich in ground plants and seeds. There is still so much to be discovered about the white-skinned Cloud People of Peru, but there has been some amazing scientific and archeological process in the last 10 years and hopefully there’s much more to come.

The history of Peru makes it an immensely rewarding country to visit. So take a look at our extensive collection of Peru Tours and discover South America. Click here for more information.