Best Time to Travel to Antarctica

The best time to travel to Antarctica will depend on what it is you want to experience in the White Continent, with wildlife highlights and the overall expedition feel changing dramatically over the course of the cruising season. The stark contrast between the Antarctic winter (when the continent is shrouded in darkness, an abundance of sea ice and very little wildlife) and the Antarctic summer (plenty of sunlight, limited sea ice and huge amounts or wildlife) highlights the fact that cruising down to the southernmost continent on earth is only possible during the Austral summer, in the months between October and March. There can still be a lot of differences within this time-frame so, as a traveller, you’ll have quite a few decisions to make before honing in on the best time to travel to Antarctica for you.

There’s a best time to travel to Antarctica if you want to: 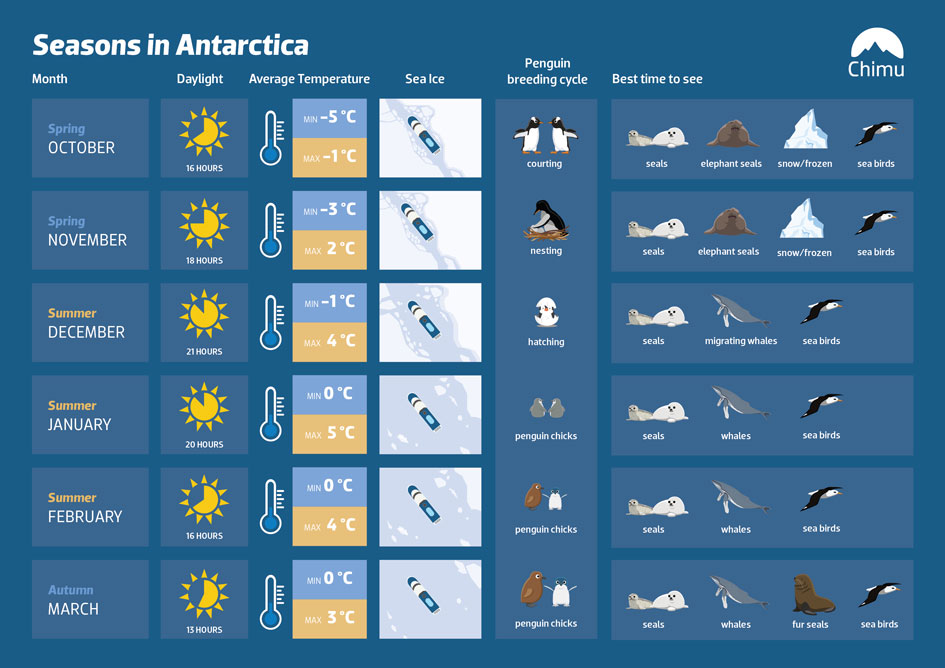 Here’s an overview of Antarctica expedition seasons, what makes them unique and makes them ideal for the very distinct experiences they offer.

Choose an expedition early in the season and you will be taking a calculated risk: that the sea ice has melted enough to allow your ship unrestricted access to its ports of call. Yet, with this exciting conundrum comes a myriad of rewards. Be among the first to set foot on Antarctica and you’ll encounter pristine landing sites, with nary a footprint to be seen, anywhere. Alongside a distinct lack of human visitors, you will already enjoy plenty of wildlife viewing, although most penguins and sea lions will not have been here long enough to cause a mess on the best landing sites on the Antarctic Peninsula.  Funnily enough, it’s the semi-aquatic wildlife that can make the biggest mess on landing sites on the Antarctica Peninsula because even though you can’t relieve yourself on land, they sure can and do, en masse. Hey, this is their playground for the summer, and they have every right to do as they please down here, but travel to Antarctica at the end of the season and you will undoubtedly smell the landing sites before you even see them!

On a pro and con basis, however, early season expeditions are awesome, especially when you consider that the ice ‘risk’ is actually quite minimal and, if anything, it offers the chance to see the biggest icebergs of the whole season.

If you look at a typical image of the extent of the Antarctic winter, sea ice doesn’t generally extend past the top of the Antarctica peninsula (the part of Antarctica that extends up towards Argentina). This is the region where most Antarctica Cruises visit. As a result, it’s very unlikely that you’d not be able to get to the Antarctic peninsula at all at the start of the season (which is still a good three or more months after the winter equinox). Sure, there may be a few nooks and crannies that are inaccessible, but there are so many great locations to visit on the Antarctica continent that this rarely causes too much of a problem.

Moreover, early-season expedition, much like late-season ones, are also among the most affordable Antarctica cruises of all, especially if you score an early-bird deal. Your days will be shorter at this time of year but, in return, you’ll soak up the gorgeous blue and red hue of Antarctic sunsets.

November is generally better than October, in our opinion, as you start to get penguin chicks hatching at this time. You’ll also enjoy longer days than you would in October. It probably goes without saying that the further you get into November, the more expensive the trips tend to get. 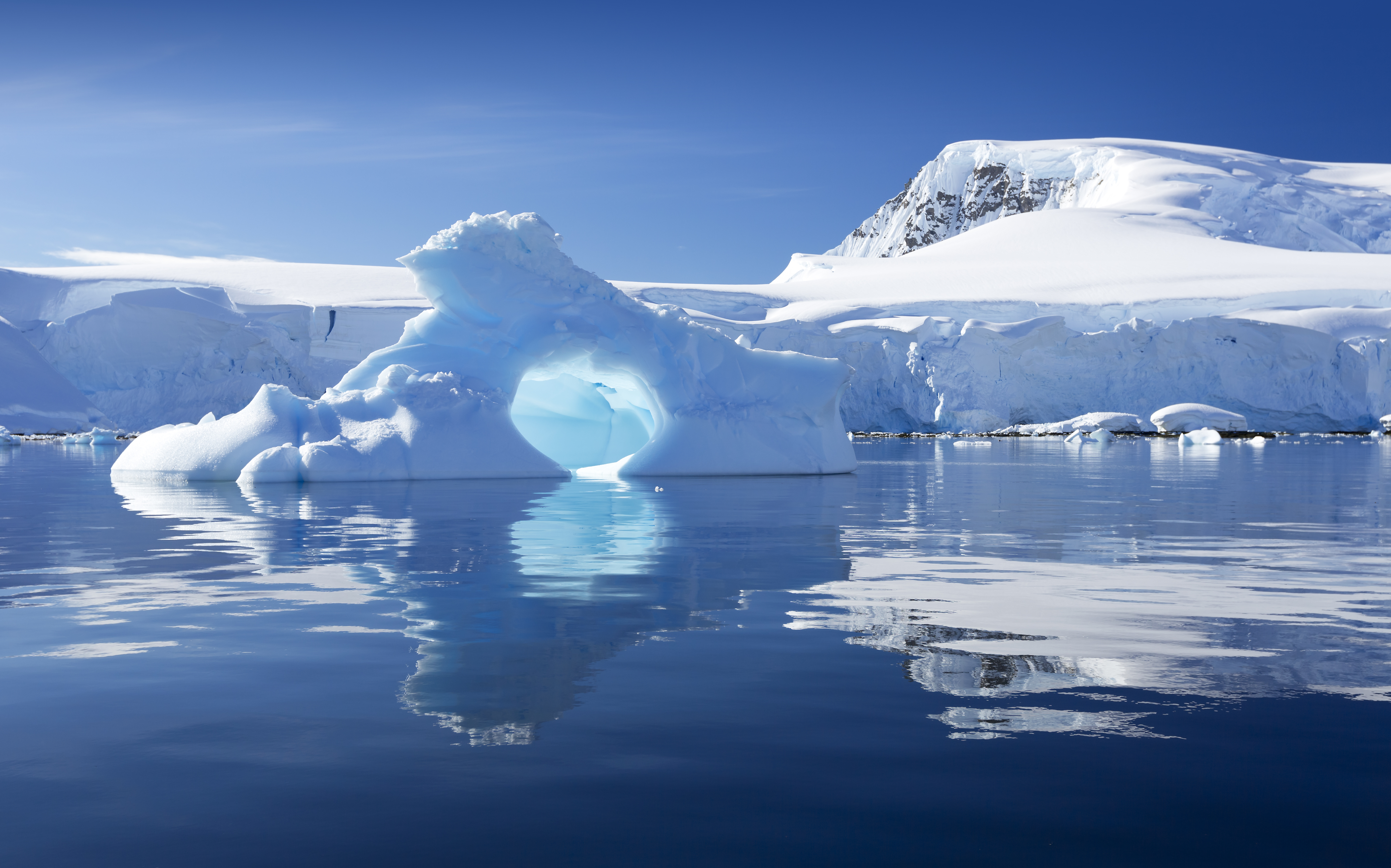 Mid-summer is often considered to be the best time to visit Antarctica. The days are their longest, the temperatures are the warmest and there are rarely sea ice issues preventing you from getting in anywhere.

Wildlife action is inarguably at its prime in high expedition season, with super cute penguin chicks and seal cubs running around everywhere and an array of sea birds arriving to join in on the action. Many whales have migrated to Antarctic waters already and you’ll likely see them feeding in small groups.

So, what’s the downside? Well, the problem is that everyone wants to go at this time! This means that Antarctica expeditions are more expensive in these months and chances of last-minute spots (let alone deals) are close to zilch. Given that this period also clashes with the Christmas/ New Year’s festive period, flights to Argentina are generally more expensive than normal too. If budget isn’t a major concern for you and you’re happy to commit 6-12 months ahead of time, then this may not be an issue but for many, mid-season pricing can make Antarctica cost-prohibitive. The whole trip including flights can often be twice as much as it would be in either the early or late seasons.

Mid-season expeditions do enjoy a few weeks of 24-hr sunlight and the highest average temperatures although the latter is probably not the ‘big deal’ you envisage it to be. The climate here is unpredictable and, even on the warmest days, a swift change will see you freeze your little footsies off if you’re not prepared. Yep, you’ll always be fully geared up when ashore on Antarctica, a ‘sweltering January day’ simply meaning you may want to take off your woollen beanie for a minute or so. But probably not.

This is actually one of our very favourite times to travel to Antarctica. As with early season cruises, prices are obviously a little cheaper but there are also other priceless advantages. For the reasons mentioned in the early season section, you’re not likely to have massive sea ice issues that prevent you from seeing the sites on the Antarctica Peninsula, yet most of the advantages are wildlife related.

The penguins and most of the wildlife will still be there so you need not worry that they will have flown the coop. The great thing, however, is that the penguin chicks will be getting a little bigger and the seal pups a little more independent. The seal pups in particular are a consideration as once they become more independent, their parents tend to go out to sea to find food. This is actually quite an important aspect for animal lovers. In mid-season, seal parents are serious ‘helicopter parents’, hovering about their bubs and ensuring they never steer too far. In late-season, however, when young parents are obviously exhausted and have relaxed the reigns (hello, we hear you!) you’ll find curious seal pups coming in for a closer look and being infinitely more interactive than at any other time. Seals are the Antarctica equivalent of puppy dogs: cute, playful and immensely inquisitive. If you’re lucky, you’ll find some landing site with unattended seal pups who will only be too happy to put on a show for you.

But there are other wildlife advantages too. Whales will join together in large pods before starting their migration north and at this time of year you’re likely to come across very large pods – it’s a truly magical experience to watch hundreds of spouts of water projected into the air in unison. February, in particular, is renowned for being the best month to see large pods of whales.

By now, 24 hours of sunlight is a thing of the past. Late-season cruising also offers inarguably the most beautiful Antarctic sunsets of all, an absolute dream for landscape photography. Not to mention the fact that it’s a much quieter scene – expedition wise – so you won’t have to compete with other ships for a prime landing spot.

Late season cruising is also ideal for Antarctic Circle expeditions, being those that sail further south along the Antarctic Peninsula than any other. Given the ice conundrum, it reasons that the later in the season you cast off, the higher the chances of a clear passage to the south.

So is there any downside to late-season cruising? Well, yes, there may be. Be among the last to travel to Antarctica for the season and you will be retracing the steps of visitors (and wildlife) who’ve literally trampled all over the landing sites. Pristine icy shores become quite mucky and a little a bit aromatic from wildlife excrement (ahem) but, to be brutally honest, we’ve never encountered a single guest who was put off going ashore for any of those reasons.

This is Antarctica, after all. Any time you can get there is the very best time of all. 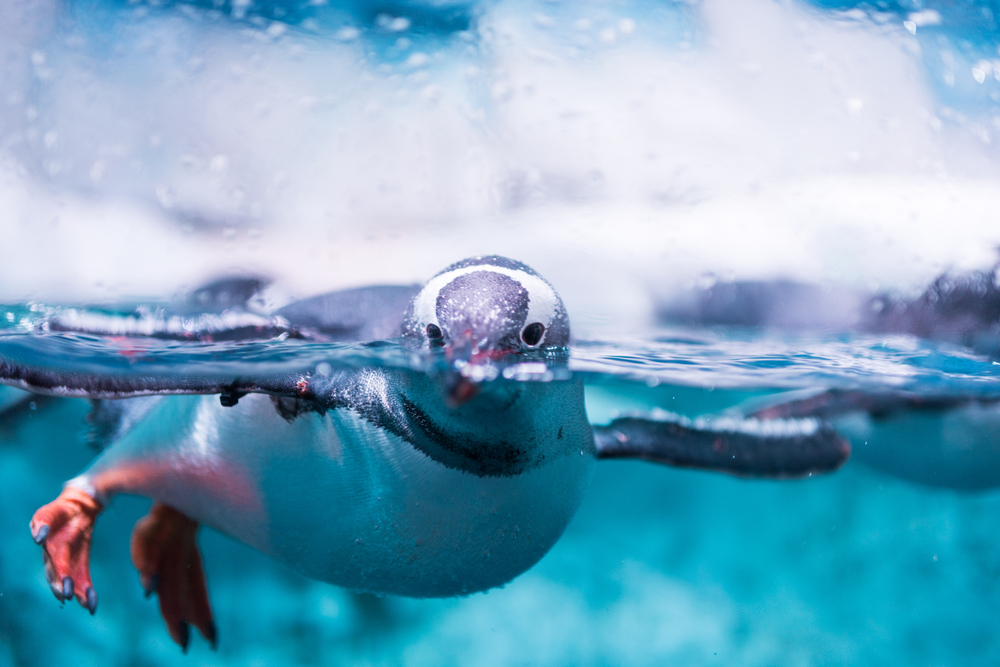 Other articles to consider reading before you book your trip to Antarctica:

10 Best things to do and see in Antarctica

How do I get to Antarctica?

The History of Antarctica

Have you decided on the best time for you to travel to Antarctica? Contact us and we can help you book your trip to Antarctica at the time best suited for your needs.

An Antarctica cruise is the ultimate journey. Filled with awe-inspiring wildlife encounters and sensory experiences of indescribable beauty. To see Antarctica is to experience your place in the world from a whole new perspective.