Updated May 2022: Wildlife-loving travellers who have been to Peru know there’s a lot more to the country than llamas and alpacas, however curiously cute they may be.

For a country primarily renowned and popular thanks to its phenomenal historical and archaeological highlights, Peru is actually a wonderful wildlife destination of its own accord and not only because it boasts an impressive chunk of the mighty Amazon Rainforest. From the endemic pelicans, cormorants and boobies who call the Ballestas Islands home, to the majestic condors who soar above the awe-inspiring Colca and Cotahuasi Canyons, the innumerable exotic species hidden in the Amazon and yes, the array of fantastic creatures which inhabit the high Andes: the wildlife of Peru is just one of the many spectacular highlights of this formidable travel destination. 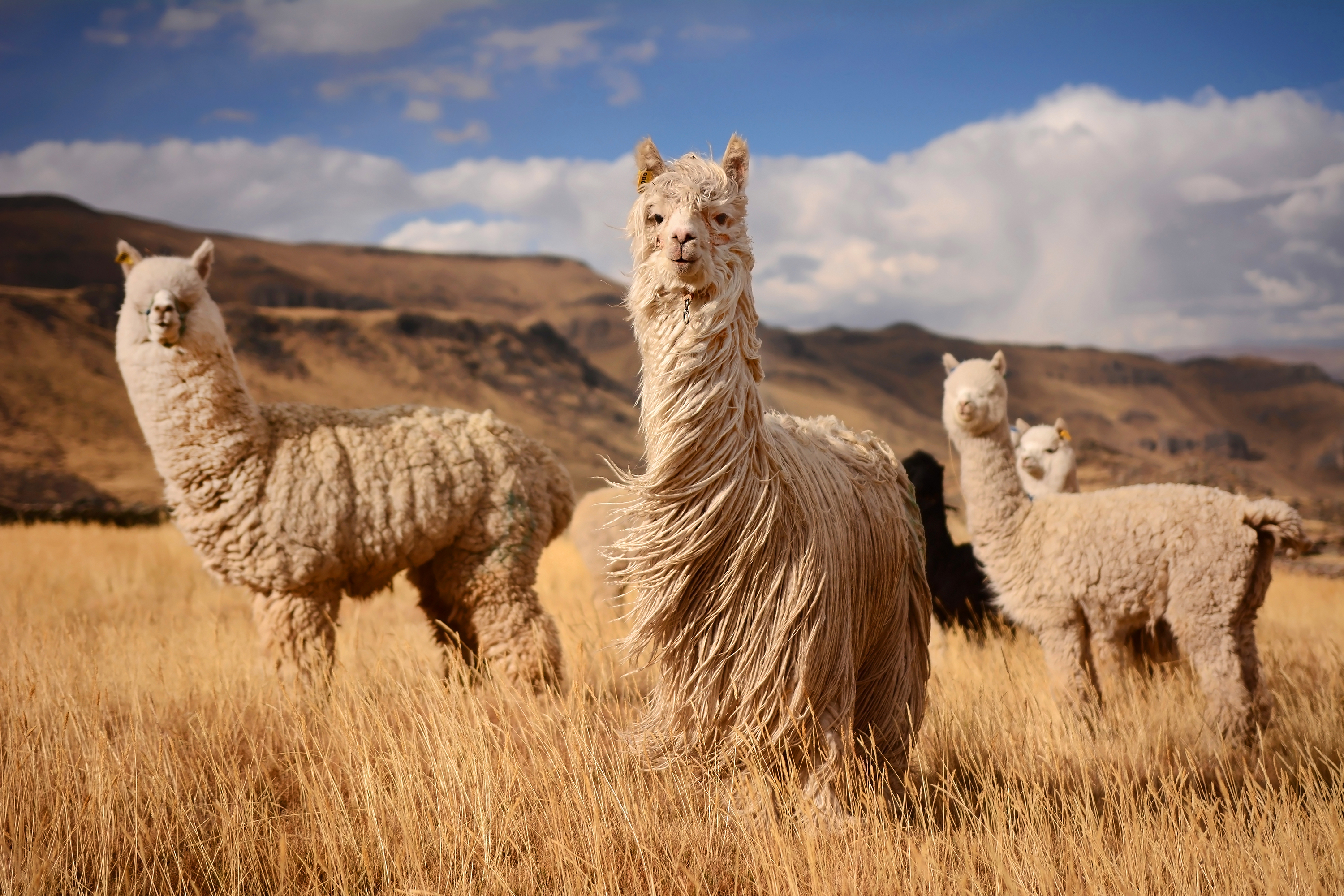 Peru owes its impressive cache of diverse fauna to the three main ecosystems which exist within its borders, namely the Andes Mountains, the Amazon and the desert Pacific coastline. Home to 28 of the 32 climatic zones in existence on our planet, this is one of the most biodiverse countries you could ever visit.

All up, there are over 1,800 species of birds, 500 mammals and 300 reptiles, plentiful amphibians and countless insects, including an estimated 450 species of colourful butterflies. Among all this wildlife are some of the rarest animals on earth, such as the elusive puma and endangered spectacled bear. The country boasts over 75 natural protected reserves, where animals can thrive away from the threatening imprint of man. It is here, in some of the remotest regions of the country, that you’ll find some of its most awe-inspiring and rare wildlife.

Here are some of the unique animals you can meet on your next trip to Peru – and where you’re likely to find them:

Regarded as one of the world’s best bird-watching destinations, Peru ranks second-highest in terms of unique bird species, with new species constantly discovered. The Andean cock-of-the-rock is the country’s national animal and the spectacularly coloured bird is found deep within the Andean cloud forests, where it spends most of its day jumping up and down on branches, emitting guttural croaks and squeaks to attract a mate.

Your best bet of snatching a peek is at the UNESCO-listed Manu Biosphere Reserve, although the Inca Trail (which is actually gifts phenomenal wildlife-viewing opportunities) has been known to hide a few of these splendours. Not nearly as ‘famous’ as many other birds in Peru, the Andean cock-of-the-rock is one of the most sought-after by dedicated enthusiasts and even the most bird-apathetic among us are guaranteed to be spellbound. Have a look at this close-up video and feast your eyes on this totally resplendent creature:

The Andean Condor, known as the heaviest and one of the largest flying birds in the world, boasts a wingspan of 3m and is the aviary highlight of trips to the Colca Canyon and its neighbour, Cutahuasi, where it can be seen taking flight at first light every day. The canyons really are the most convenient place to spot the condor, although more intensive journeys into the Cordillera Blanca near Huascaran will reward you with plenty of sightings. 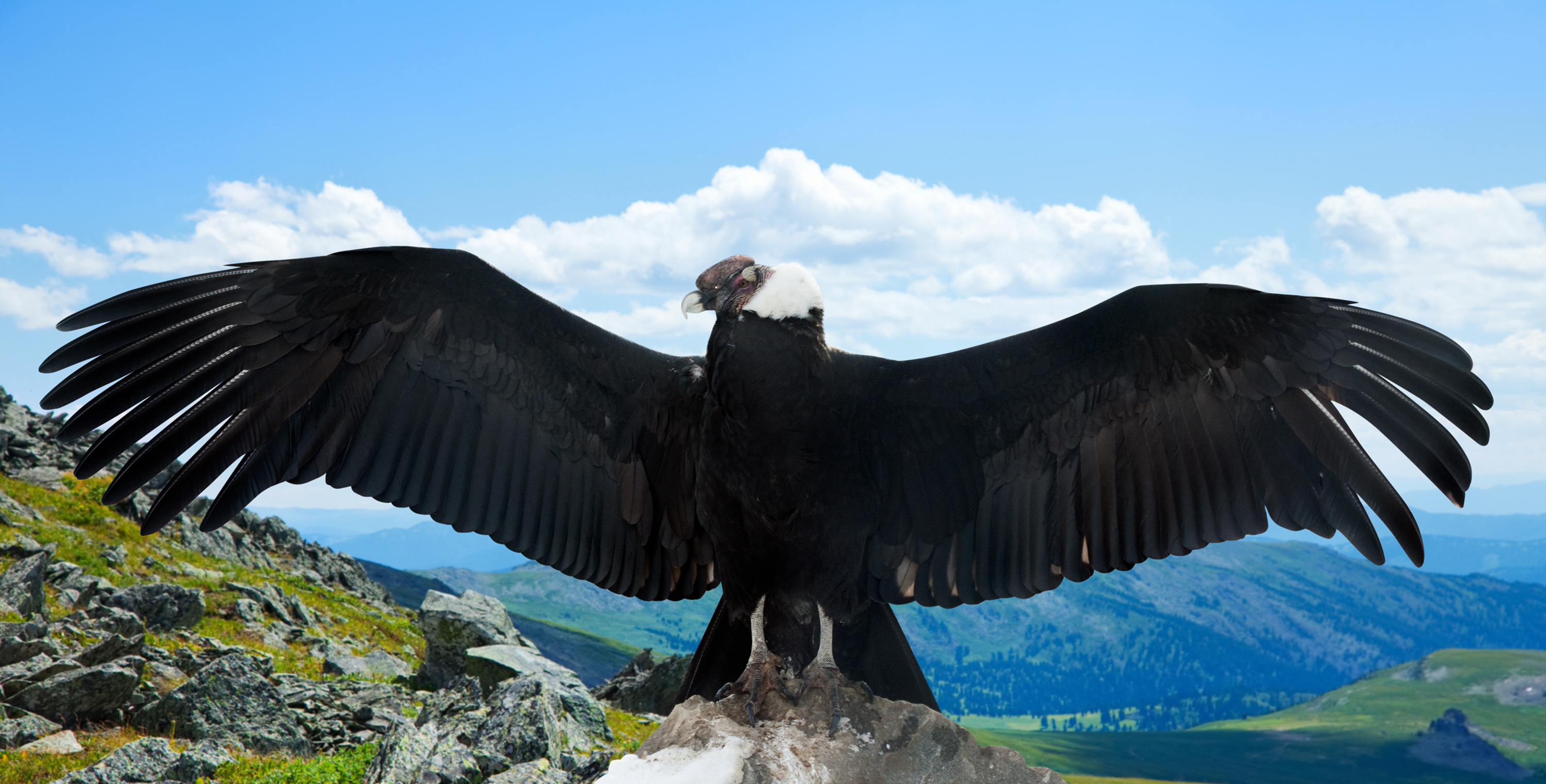 The Andean Condor watches over the valley for prey in Peru. Photo credit: shutterstock

Camera shy and painfully elusive, the big cat of the Amazon is a bucket-list contender for all animal lovers visiting Peru. Head to Manu Biosphere Reserve, one of the world’s best wildlife-viewing platforms, and keep your eyes peeled on the river banks, where jaguars can best be spotted.

But do keep in mind that this predator is a cunning fox, and sightings are not guaranteed. Still, considering Manu is such a phenomenal wildlife destination, a jaguar-spotting-mission is definitely a worthwhile endeavour to add to your must-do list. 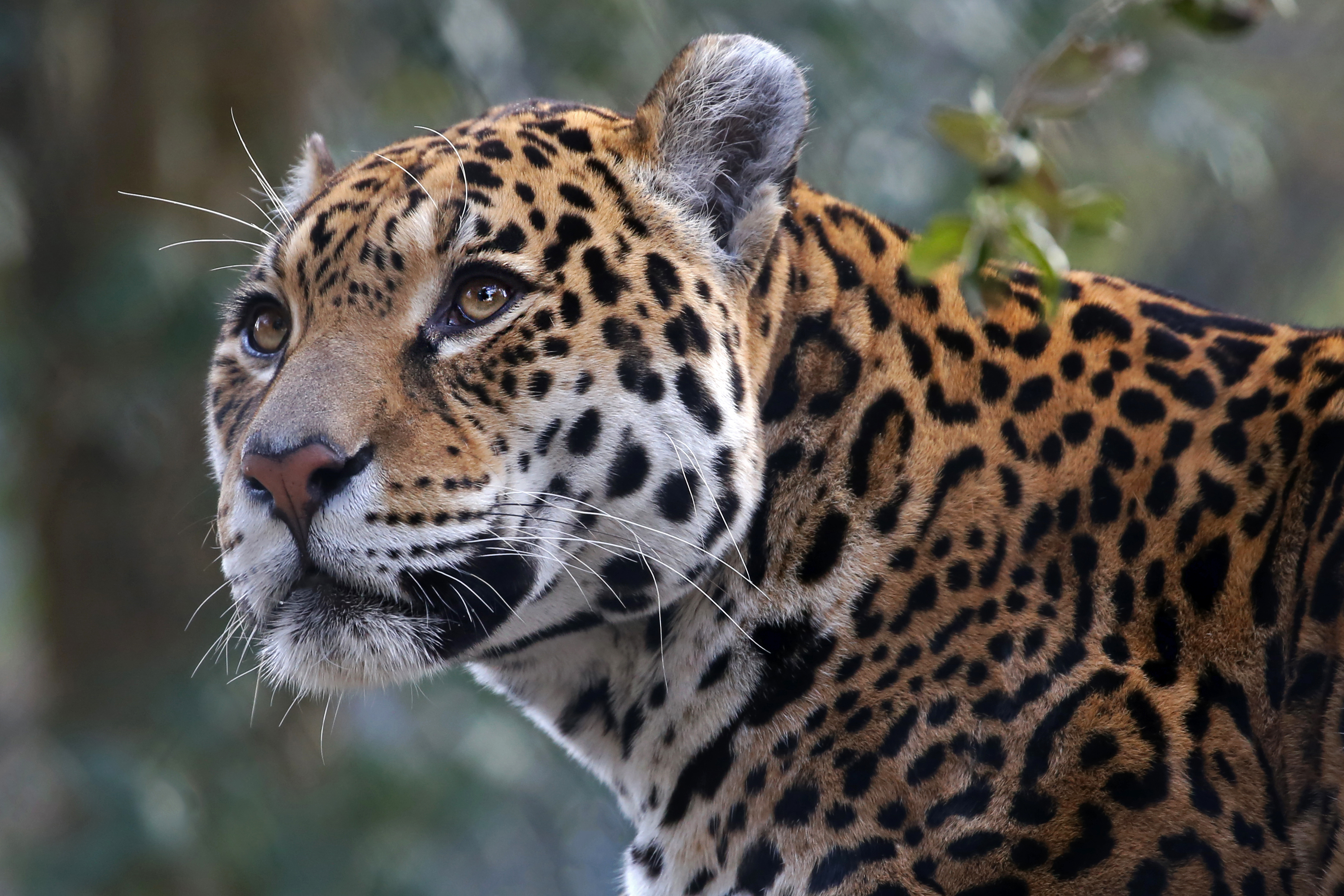 A magnificent jaguar in the Amazon, Peru. Photo credit:’ shutterstock

If you can’t quite manage a side cruise to Antarctica on your next visit to South America, then you can thank the stars for the Ballestas Islands, home to a great array of wildlife including the handsome Humbolt penguins. This is the only place outside of the Antarctic region where they can be spotted. Alongside penguins, a visit to the Ballestas islands (just a short drive south of Lima) will see you come face-to-face with Peruvian Pelicans, sea lions, cormorants, Inca Terns and countless migrating birds. 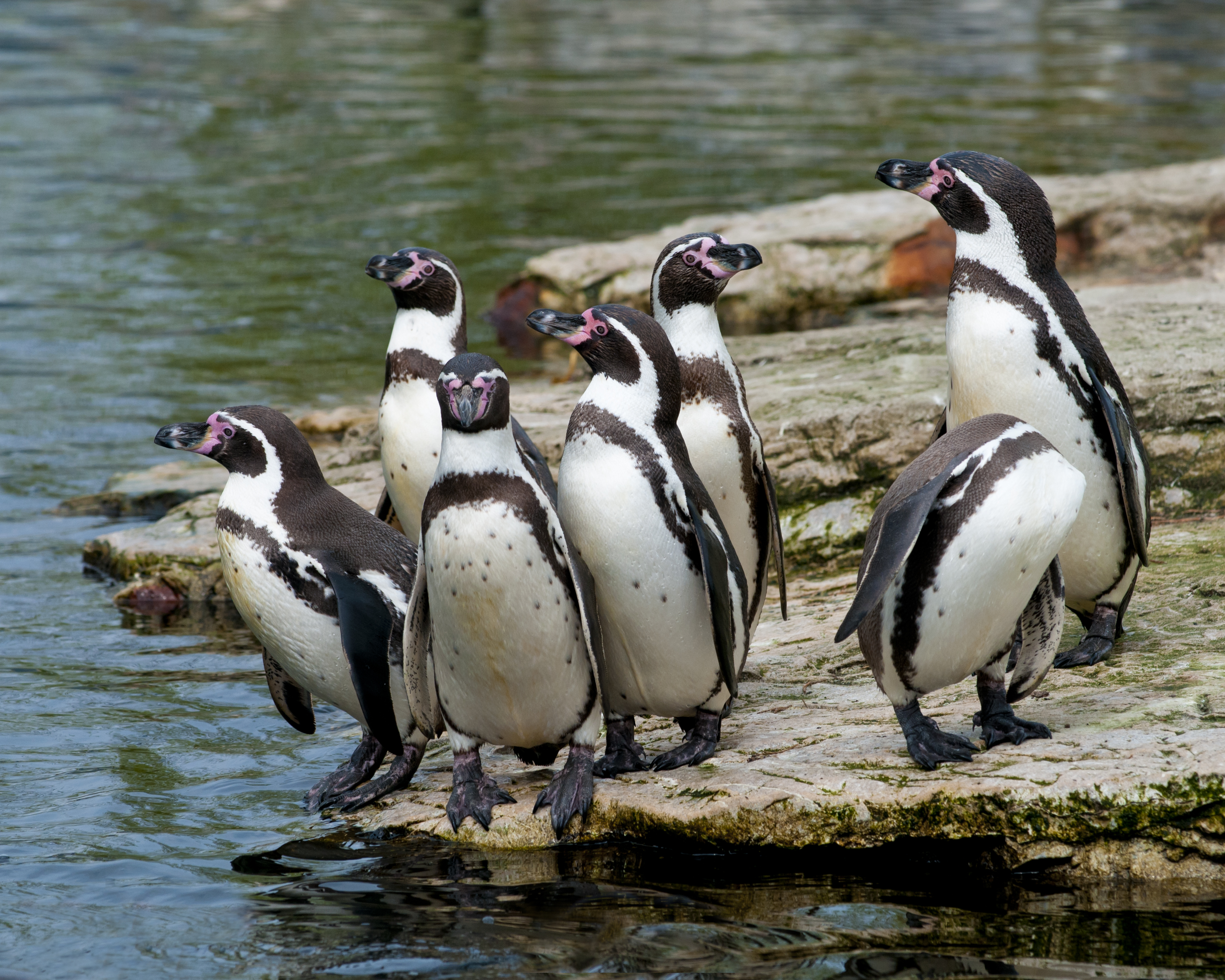 The Humboldt Penguins are an endangered specie in Peru. Photo credit: shutterstock

Travel to the heart of the Peruvian Amazon basin from the base-town of Iquitos to see the revered ‘pink dolphin’, one of the wildlife highlights of the Amazon. The dolphin’s translucent skin reveals capillaries that are very close to the surface, so the more excited the dolphin gets, the more he blushes!

On a trip to the Peruvian Amazon, you can also spot brightly-coloured Macaws, Tufted Capuchin and Woolly monkeys, sloths, adorable Capybara and Giant River Otters, the largest of their kind in the world and one of the most formidable jungle predators, known to even take on jaguars and caimans. For lovers of exotic jungle wildlife, Iquitos in Peru really is a one-stop-shop feasting for the eyes. 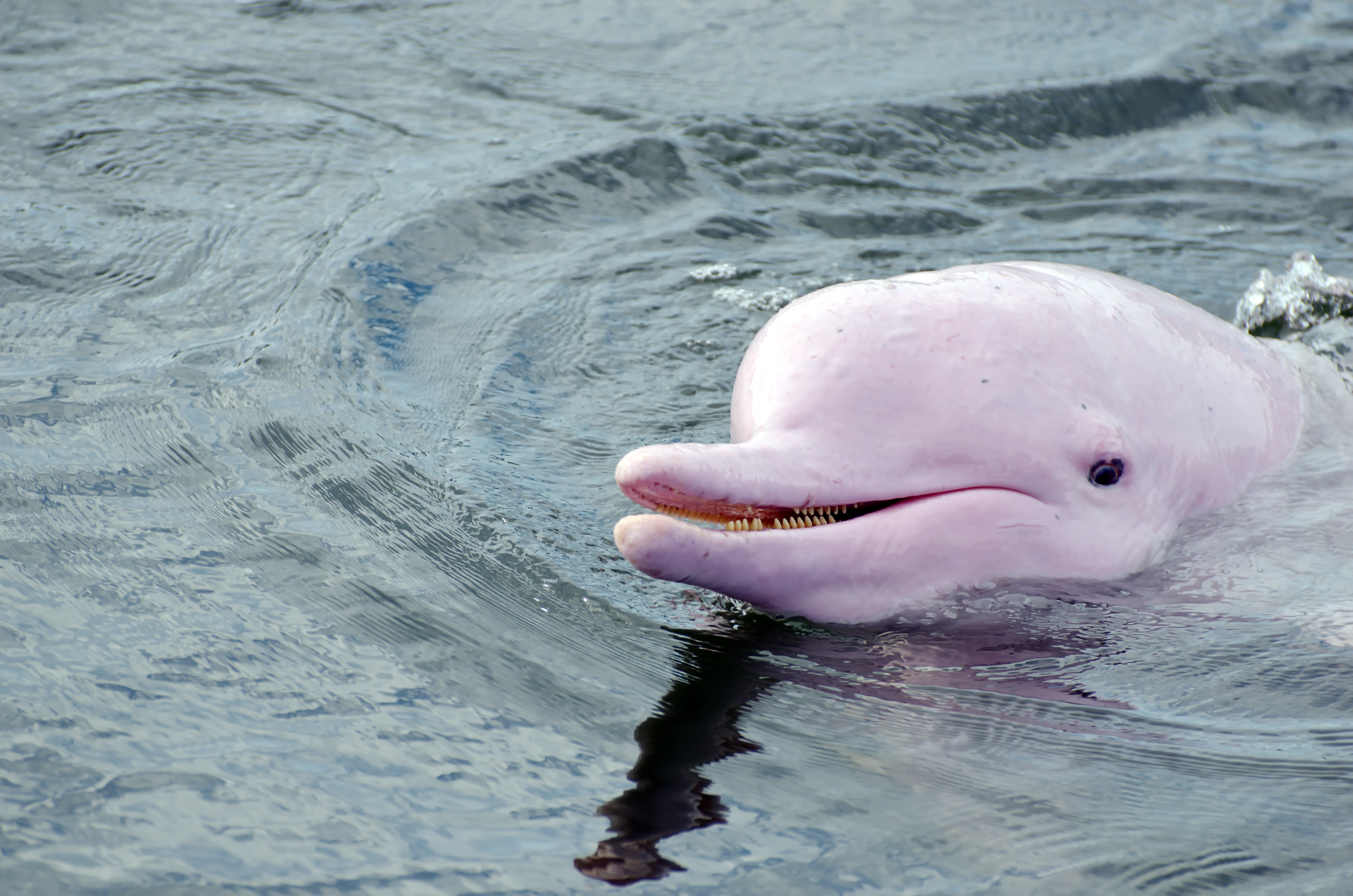 No respectable photo of an Andean landscape would be complete without one of these two iconic creatures in the foreground. Llamas and their stockier cousins, alpacas, are now synonymous with Peru and have been an intrinsic part of local culture and folklore for thousands of years. Renowned for their incredible stamina and used as pack-animals for centuries – a llama can cart around 40kg of goods for more than 40km before it needs a rest – they are mostly beloved for the unusual way in which they display their dissatisfaction, namely, blowing raspberries.

Alpacas, on the other hand, have learnt to use their good looks and golden locks to get ahead in life, and instead of lugging around bags of potatoes they gift the world some of its most prized wool. Alpaca hair is said to be softer than cotton and warmer than goose down, making it one of the most coveted wools in the world. Unfortunately for the alpaca, however, its meat also boasts a very low percentage of cholesterol, so when it’s done being shorn it does get grilled, usually medium-rare. *Sigh* 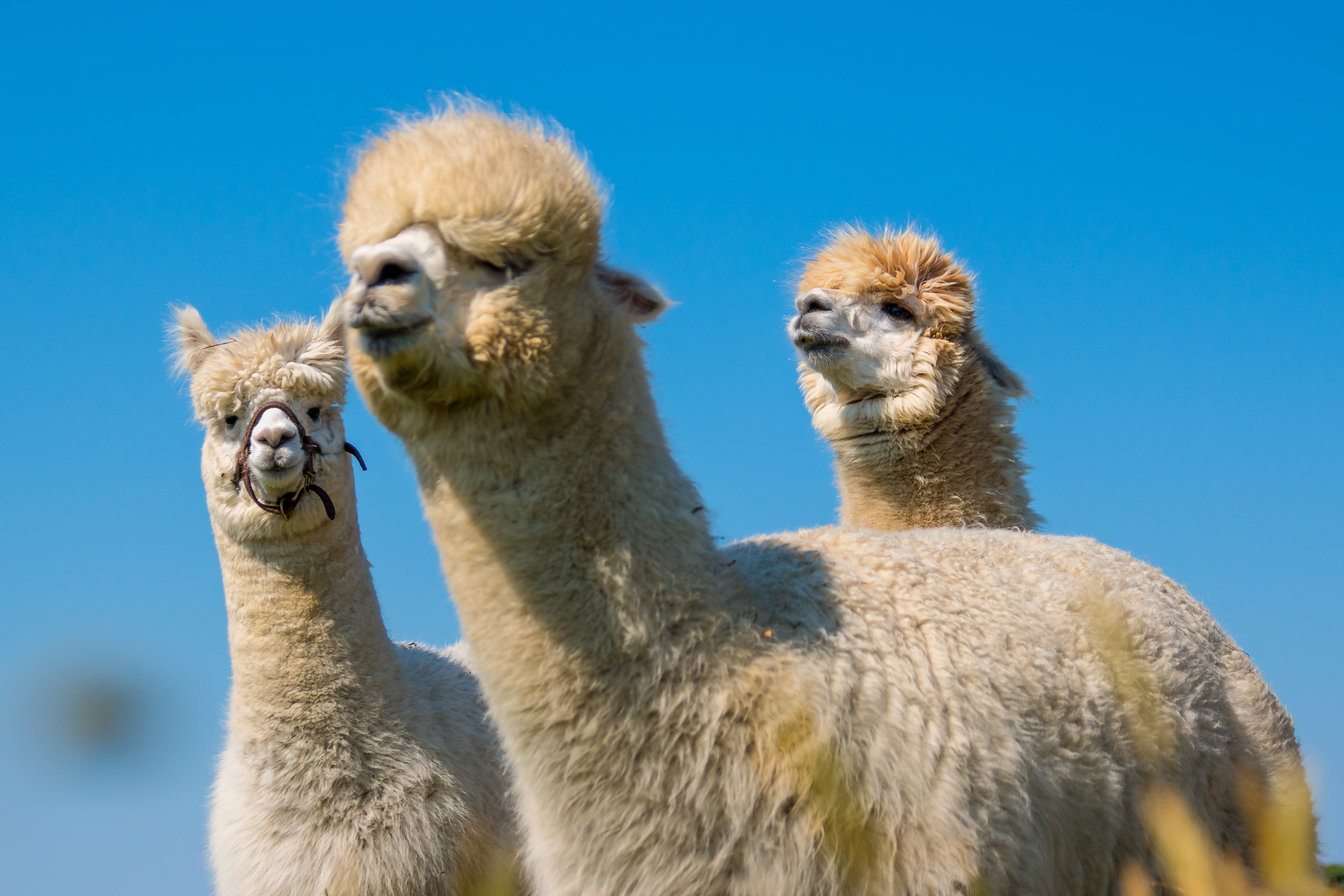 A group of Alpacas in Peru. Photo credit: shutterstock

Choose any trip which traverses the high Andean plateau of Peru and you’ll likely come across multiple herds of both llamas and alpacas, and if you hit up Papacho’s in Cusco, you could even feast on a seriously delicious alpaca burger. The restaurant is owned and run by Gaston Acurio (of Lima’s Astrid y Gaston fame) so you know the quality is world-class.

Known locally as jukumari, the Andean spectacled bear is the last remaining short-faced bear in the world and the only bear in all of South America. Their prime habitats are the humid forests clinging to the sides of the Andes Mountains, and although they prefer to roam areas above 4,000m in altitude, they have been found scouring for food as low as the coastal deserts regions. The only remaining population now lives in high-altitude border areas of northern Peru (near the border with Ecuador) and although a sighting of this incredibly shy creature is rare, when accomplished, it is an unforgettable highlight. 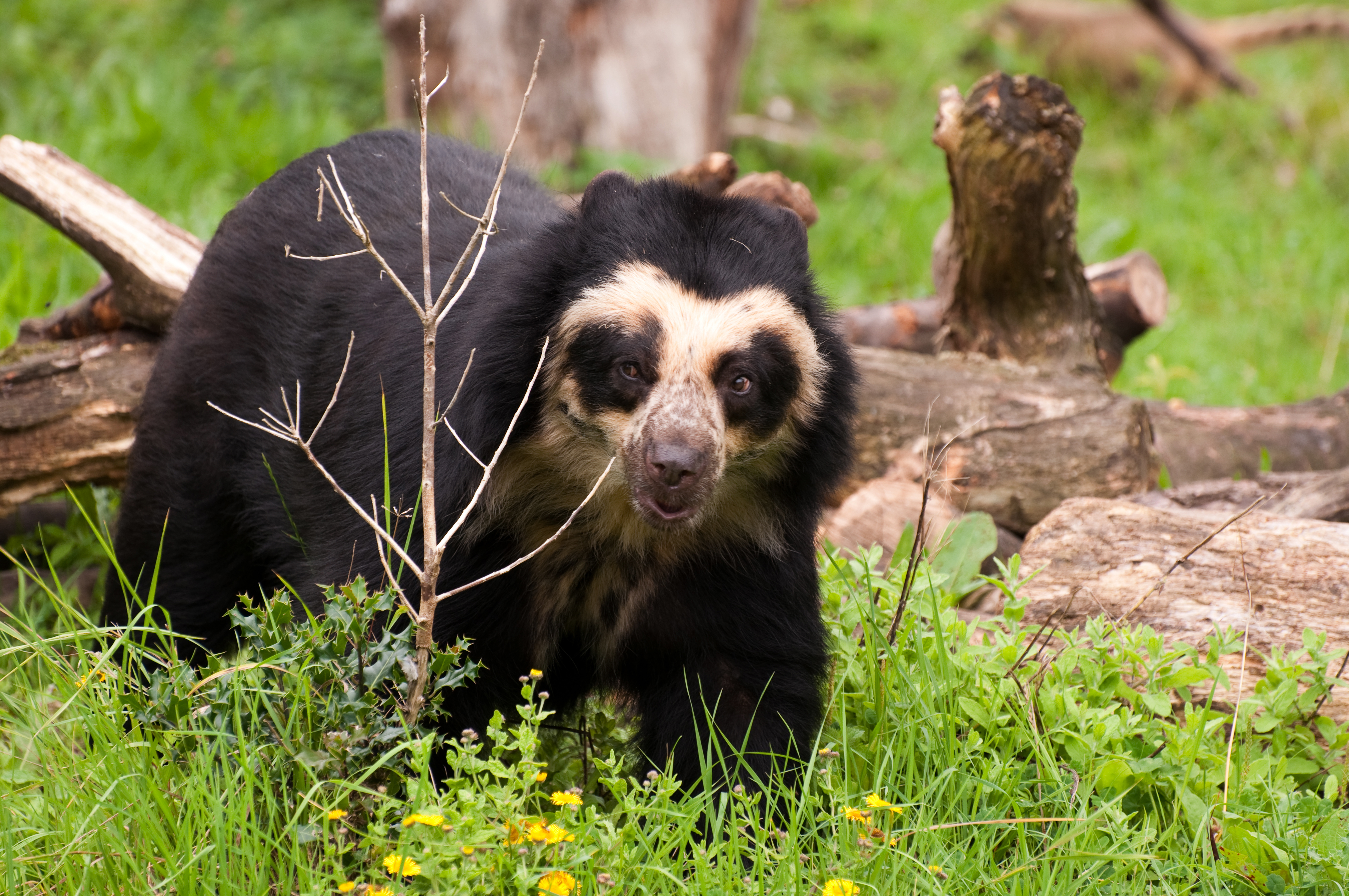 Spectacled Bears are named so for the whitish to yellowish rings that encircle their eyes, resembling large eyeglasses. Photo credit: shutterstock

The first time you spot one of these bizarre-looking hounds along the dry coastal strip of western Peru, you may be tempted to reach for a bottle of mange-curing ointment. That is, until you notice how smooth their skin is and how perfectly happy this pooch is to live without fur.

One of the most distinctive species of wildlife in Peru, the Peruvian Hairless Dog is the true punk of the canine world and was the revered companion of ancient pre-Inca cultures, with many dedicated sculptures found dating back more than 2,000 years. The hairless dog is often found meandering through some of the most famous archaeological sites along the coast, such as Chan Chan (headquarters of the ancient Chimu) and Pachacamac.

In 2001, Peru took measures to ensure the country’s only native canine be protected for posterity and named the hairless dog part of its ‘cultural patrimony’. You can celebrate Peruvian National Hairless Dog Day on June 12th. 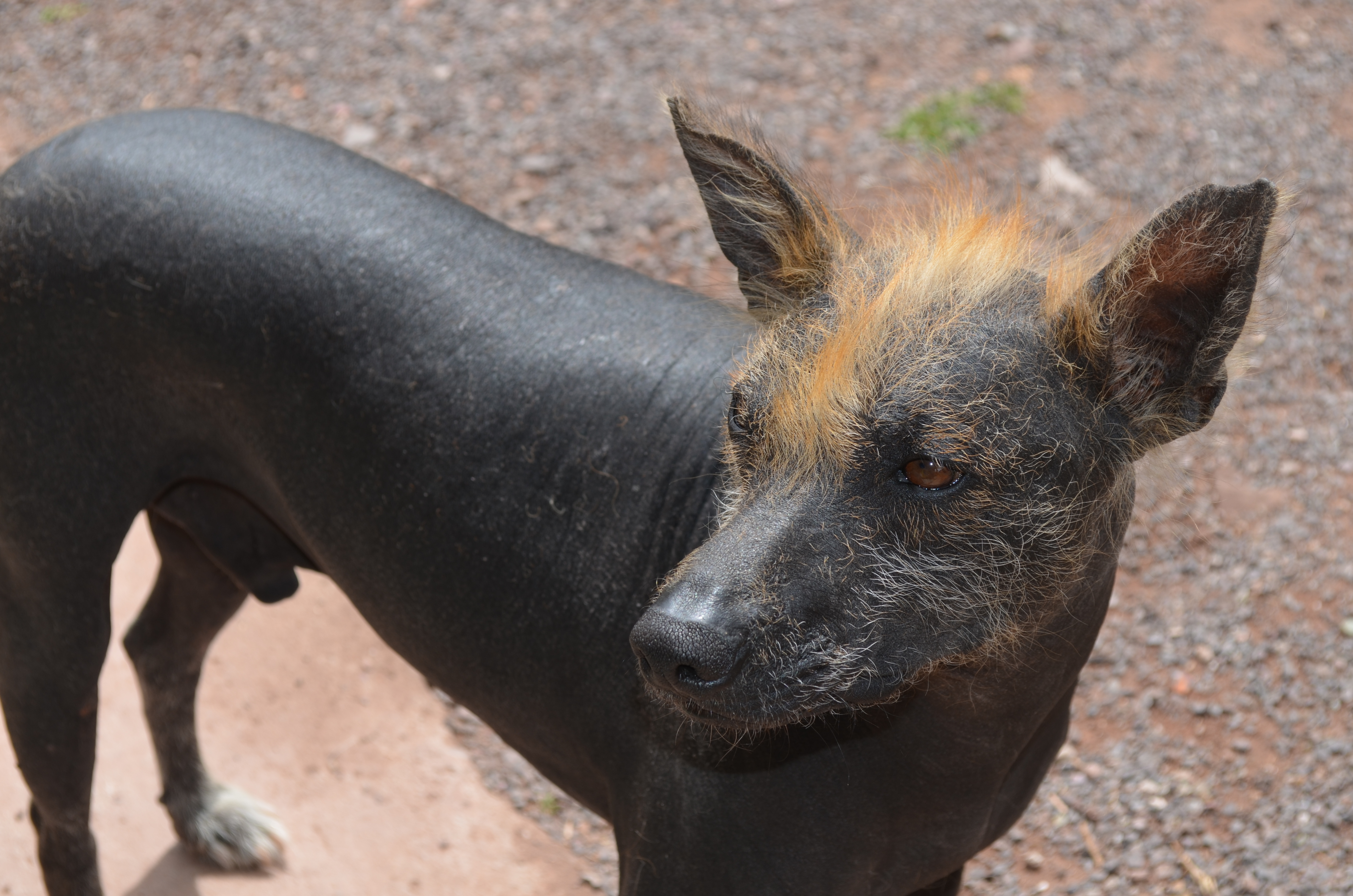 This chubby, almond-eyed rodent is a type of chinchilla that’s endemic to Peru and looks like a hybrid between a rabbit and a squirrel, although your 6-year-old may protest he looks like a real-life Pokemon. Found scooting about the arid rocky terrains of Peru’s Andean landscapes, the vizcacha is a common sight in the Sacred Valley of the Incas, Machu Picchu, and the Colca Canyon.

Arguably the rarest species of wildlife in Peru, the puma has an illustrious historical importance in the country, with the ancient Inca city of Cusco said to have been shaped in the elegant animal’s profile. Nowadays, quite a few individuals remain in the highland Andes, in the region around Cusco, Arequipa, and a few select reserves like Tambopata. Traditionally, pumas boast one of the largest geographical range of any mammal in the Western Hemisphere and are often seen hunting guanacos – their favourite treat – in southern Patagonia. 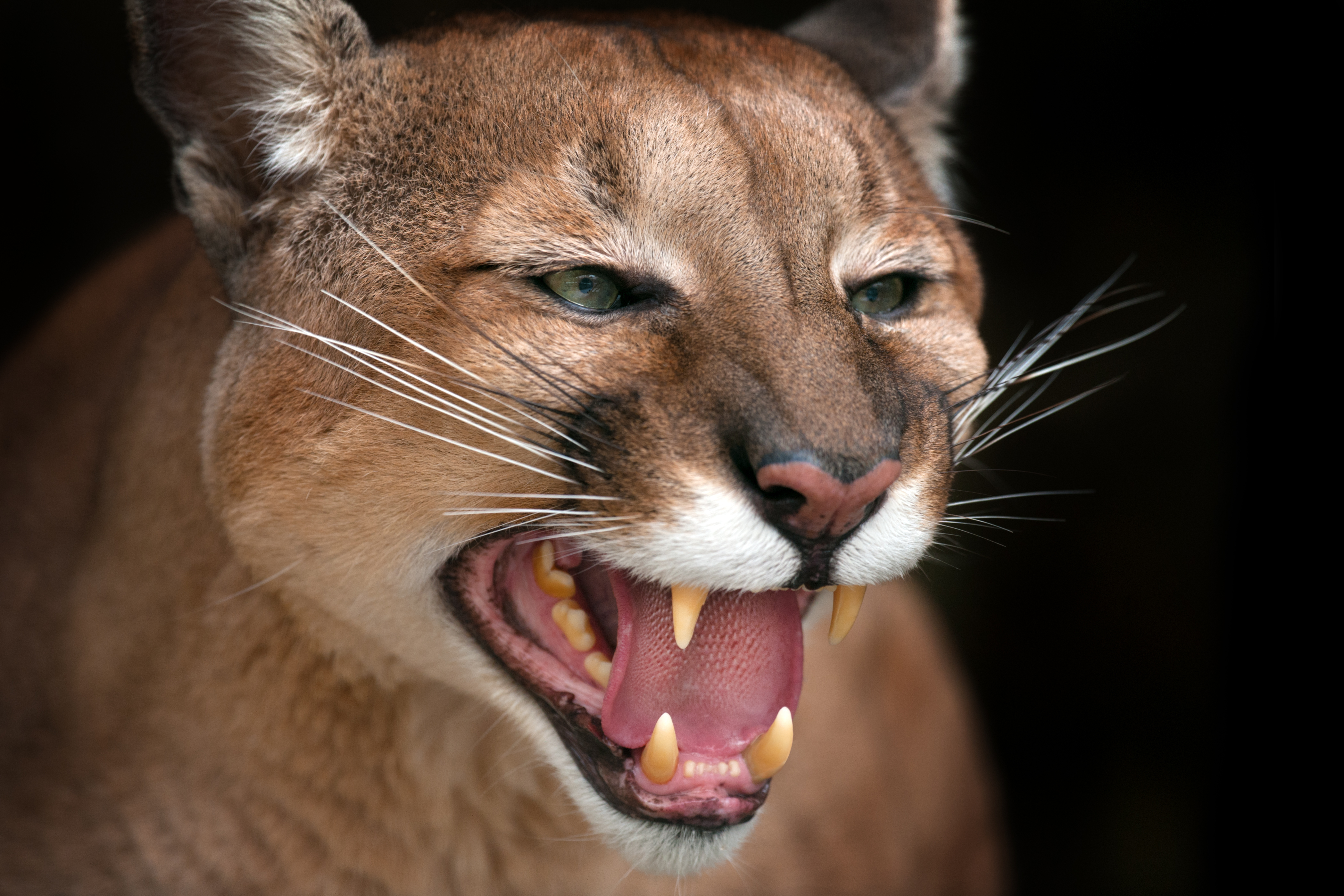 Would you like to encounter the Amazonian Puma in Peru? Photo credit: shutterstock

Ready to plan your exceptional wildlife trip to Peru? Contact us to discover our Signature South America itineraries, which can help you see all those incredible creatures on a face-to-face encounter.

The best of what Peru has to offer has been handpicked and packaged into this perfect 9-day, superior styled itinerary, ensuring that you get the most out of your visit to this incredible country.