Colombia’s architectural crown jewel is an absolute delight to explore at length. Often dubbed the best preserved colonial town in the entire South American continent, Cartagena is a historic walled town which reveals a million stories of days gone along every one of its charming cobblestone streets. Safe, colourful, vibrant, popular and effervescent, this UNESCO treasure should be a firm place-taker on any Colombia tour itinerary.

Cartagena has seen an impressive surge in popularity over the last decade and, gentrification and ‘trendification’ notwithstanding, is most impressive sites still lie in wake of its long and illustrious history. Within the imposing walls of the Old Town Centre you’ll discover a flurry of stunning plazas, cathedrals, grand mansions and wonderful fountains dating back hundreds of years. You’ll stumble upon narrow laneways, flower-filled wrought-iron balconies and more colour than your eyes can soak up.

The Old Town’s clock tower dates back to the 1800s and is now a revered symbol of the city. As the main entry point into the historic quarter, it is a befitting first port of call for all who visit the city. The tower opens up to the gorgeous Plaza de los Coches, all framed by picturesque shopfront arcades. 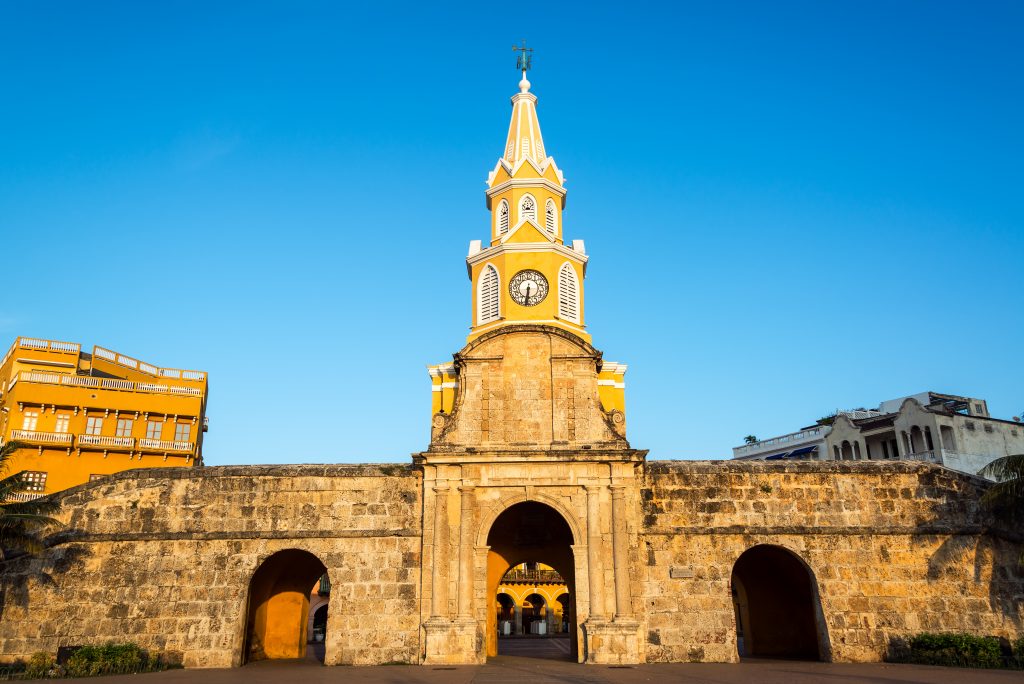 This old clock tower is the ‘city gate’ of Cartagena. Photo credit: Shutterstock

Home of the architectural trifecta of Cartagena, Plaza Bolivar is home to the 18th-century Palace of Inquisition, 16th-century Cartagena Cathedral and the wonderful Zenu Gold Museum (one of the city’s best museums despite its diminutive size) all framing a most respectable statue of Bolivar himself, on horseback. The leafy square with its hive of crowd activity serves as the epicentre of the walled town, and all along the perimeter you’ll find street vendors of all sorts and visitors taking a rest with a refreshing drink in one of the many outlets. Due to the sheer number of attractions here, and the fact that the plaza is actually a blissfully relaxing place to be, you can certainly put aside quite a few hours to do it all justice. 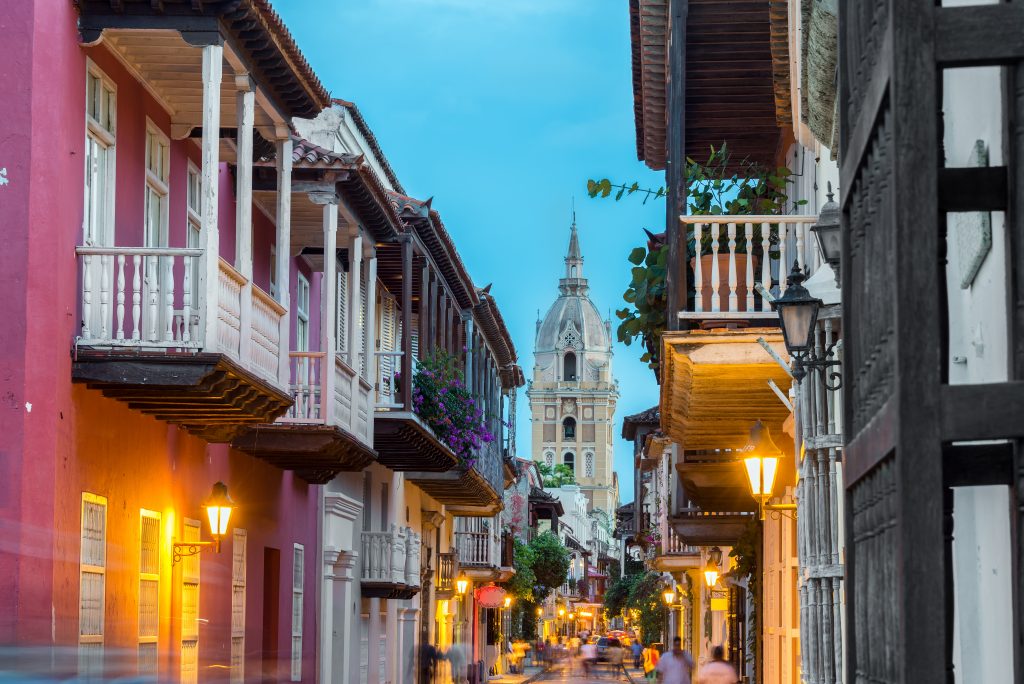 Beautiful view through this narrow street, with the Cathedral in the background. Photo credit: Shutterstock

Casting its protective shadow over the city centre, the Castillo San Felipe acted as the preserver and protector of priceless treasures in Cartagena. Renowned for being the one Spanish fortress of the New World never breached, Castillo San Felipe had the illustrious task of protecting what was, back then, the richest colonial city in the whole continent. The site itself is very interesting to explore its length and its location, on a hill overlooking the coast, makes it a phenomenal sunset-watching spot to boot.

The Jesuits were certainly busy converting believers in the New World and in Cartagena they went about building a convent and church which was overseen by the Slave of the Slaves’ as San Pedro Claver was known, a priest who acted as an apostle for the oppressed. You can visit the room in which he lived in the monastery, as well as his remains resting in a glass coffin in the interior of the church. 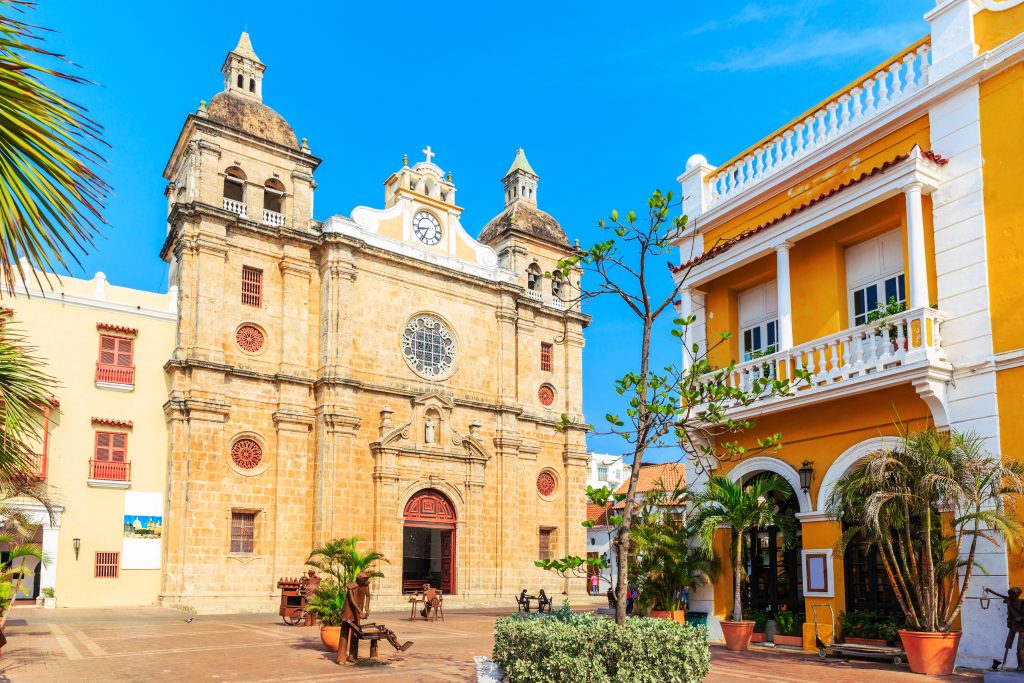 Legend has it that it was the devil’s work to ensure this church’s bell tower sit just a teeny bit crooked, and who are we to argue? The city’s oldest church, found again in its homonymous plaza, was built in the 1500s and actually used to sit in Plaza de los Coches before being devastated by fire and rebuilt nearby. While it may look like the exterior of this church could do with a touch up of paint, it’s the wonders inside that ought to entice you to enter.

The amazing intricacies of Baroque design are evident in the altar, which boasts a statue of Christ carved in wood. You’ll notice the extra buttresses which were added after its completion, after it was evident that a few miscalculations had taken place during its construction, and precarious cracks started to show through. Self-guided tours are offered in various languages. 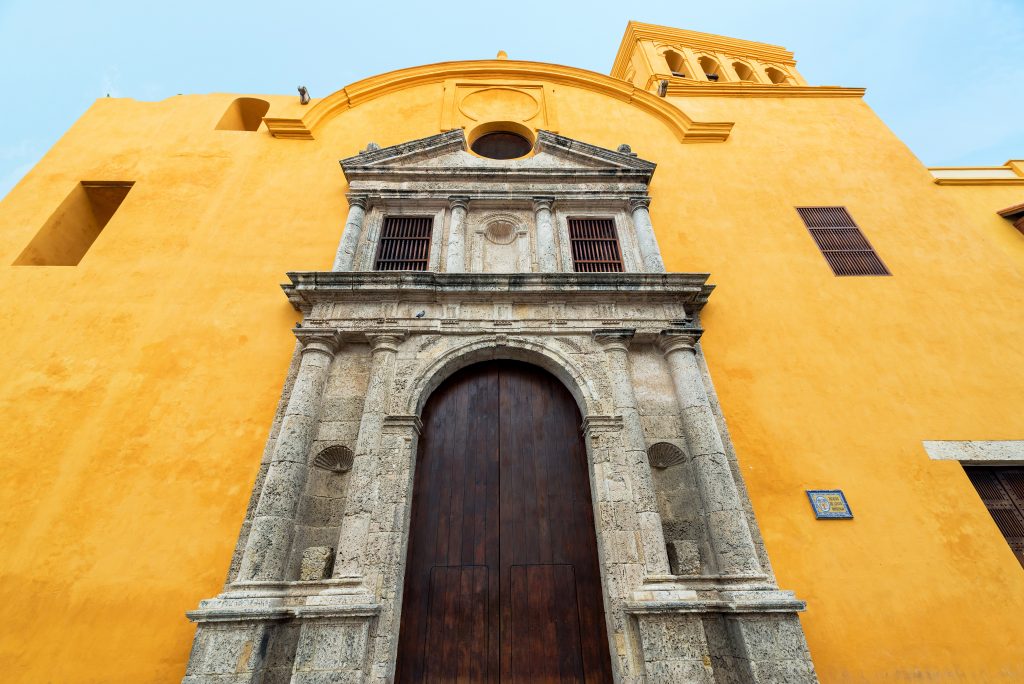 The church on the Santo Domingo plaza in Cartagena. Photo credit: Shutterstock

It’s a good thing that the city’s main performing theatre received a thorough facelift in the mid-1980s, for it was undoubtedly the one building in Cartagena which needed it most. Built in 1911 using architectural influences from the Caribbean, the Teatro Heredia boasts an absolutely magnificent interior. Carrara marble and 22-karat gold-infused plaster create an almost iridescent aura and, together with murals and sumptuous furnishings including an enormous crystal chandelier, make for an astonishing visual feast. If you can, try and nab seats to a concert during your visit and you will be handsomely rewarded. 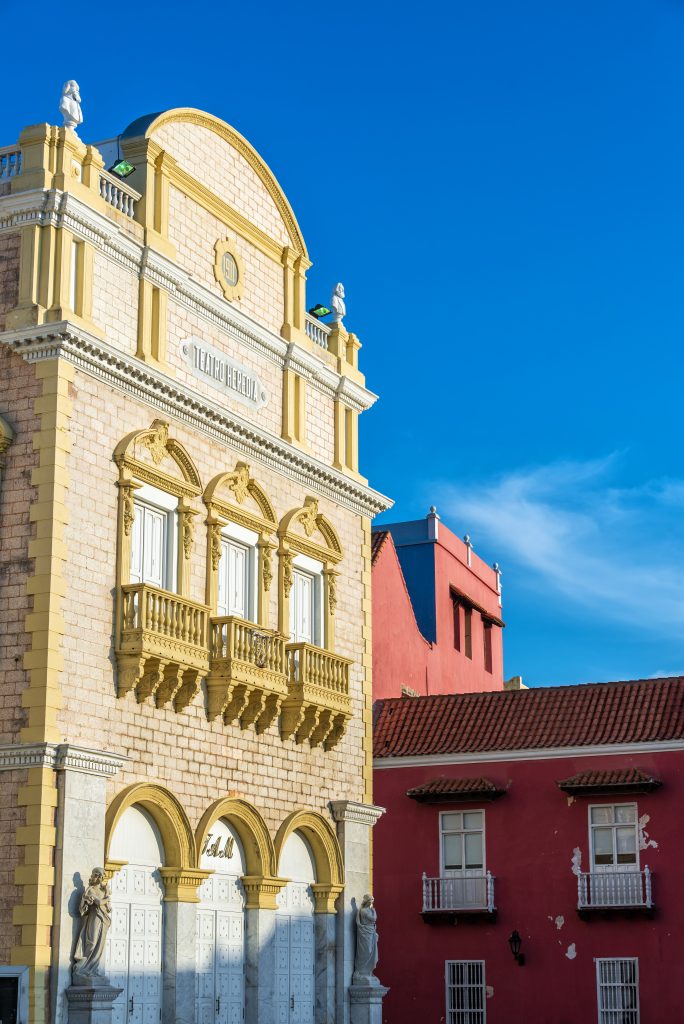 Cartagena Old Town Centre boasts enough highlights to hold you prisoner for days on end, but if you do have the time then check out the resplendent Rosario Islands, which lie only 100km (or 1-hour boat ride) off the coast of Cartagena. There are countless reasons we love this amazing coral archipelago (ok, #1 is because it’s an amazing coral archipelago!) but the primary one is that it showcases the incredible variety found in Colombia. This is one of over 40 national parks found in the country, it is crazy easy to reach and makes for a fantastic ‘last WOW stop’ on a whirlwind tour of Colombia.

What to do once there? Everything! This is a section of the most important barrier reef in the Caribbean and a marine wonderland unlike any other. Swim, snorkel, dive, fish, worship the sun and visit the open-air oceanarium, devour freshly caught fish cooked to perfection and recount all your Colombia travel memories whilst lying on a hammock. Or did that only work for us? Beautiful beachside resorts offer you the chance to chill out for a few days amongst stunning surroundings. And what better way to end a tour of Colombia than by soaking up the rays of a magnificent Caribbean beach? 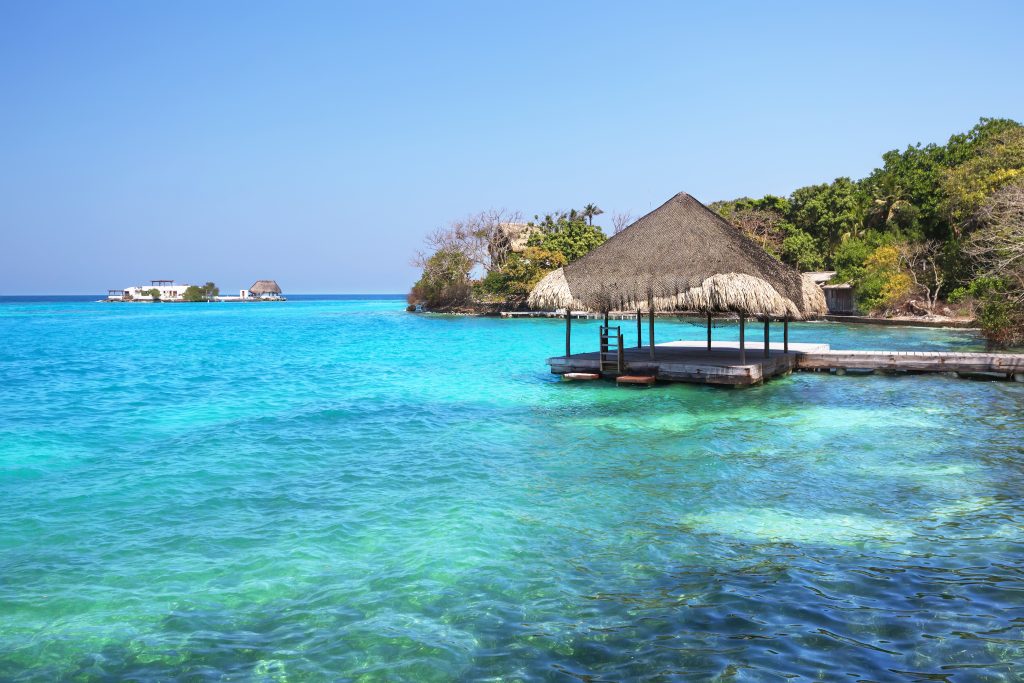 Cartagena is Colombia’s most visited city and, considering the year-round idyllic climate, the main concern is usually crowd size rather than bad weather. Peak travel season here is end-of year vacation times (From mid-December to mid-January), Easter Week (which sees Colombians descending on the city en masse) and mid-year European vacation times, between June and September. Travel outside of these times and you’ll find fewer fellow visitors and – in the first three months of the year – the ideal climate + blissful quietness of all.

Every day, over 20 flights connect visitors from the capital, Bogota, to Cartagena, with the 1.5hr flight being fuss-free and inexpensive. Having said that, Cartagena International Airport offers direct flights to Europe (Madrid, Amsterdam and Helsinki), NYC, Miami and Lima (among others) so it is as convenient a start/end point in Colombia as the capital, Bogota. A one-way trip starting in one city and ending in another is also easily arranged.

Colombia is one of South America’s fastest rising stars and if you wish to experience its glorious beauties now is a fantastic time to jump on board. Contact us for more info.

Find out more about this 6-day tour of the highlights of Colombia, discover Bogota, the artesian centre of Cartagena and relax on Rosario island.