The gastronomic delights of South America’s best cuisines feature heavily on all travel guides and articles about the region, as each and every country showcases a bevy of delightful specialties that have nowadays become household names the world over. However, for those with an adventurous palette, you might be curious about the most bizarre foods to try in South America.

Funnily enough, however, there are a few revered local delights that always seem to be mysteriously absent on all ‘must-eat’ blog posts about Latin America and although some may say surprises are best left discovered on one’s own, here at Chimu Adventures we think ‘What’s the fun in THAT?!’

Heading to Latin America on a whirlwind tour and think all you’ll feast on is empanadas, churros, tacos and asado? Think again, intrepid foodie, ‘cos Latin American food is not all excellent fun and delicious games. No, no no…sometimes, it’s more like bull genital soup, fermented saliva corn beer and sandwiches filled with all sorts of unmentionable animal parts…

Here are just some of the most bizarre foods to try in Latin America. If you dare.

We suggest proceeding with caution and an adventurous spirit!

Our way of gently introducing you to the weird, wonderful and oftentimes questionable food delights of Latin America, cuy is a delicacy of the high Andean regions of the continent and probably one of its most famous side-serves. It’s supposed to be a main course, naturally, but the scrawny and rather bony culinary delight usually only succeed in satisfying curiosity rather than a ravenous hunger. Once you get over the unceremonious way in which cuy is served (usually whole with teeth and nails still intact) you may find this special offering surprisingly tasty.

That is, unless you’ve actually ever had a guinea pig as a pet, in which case you may want to quickly scroll past the photo below. 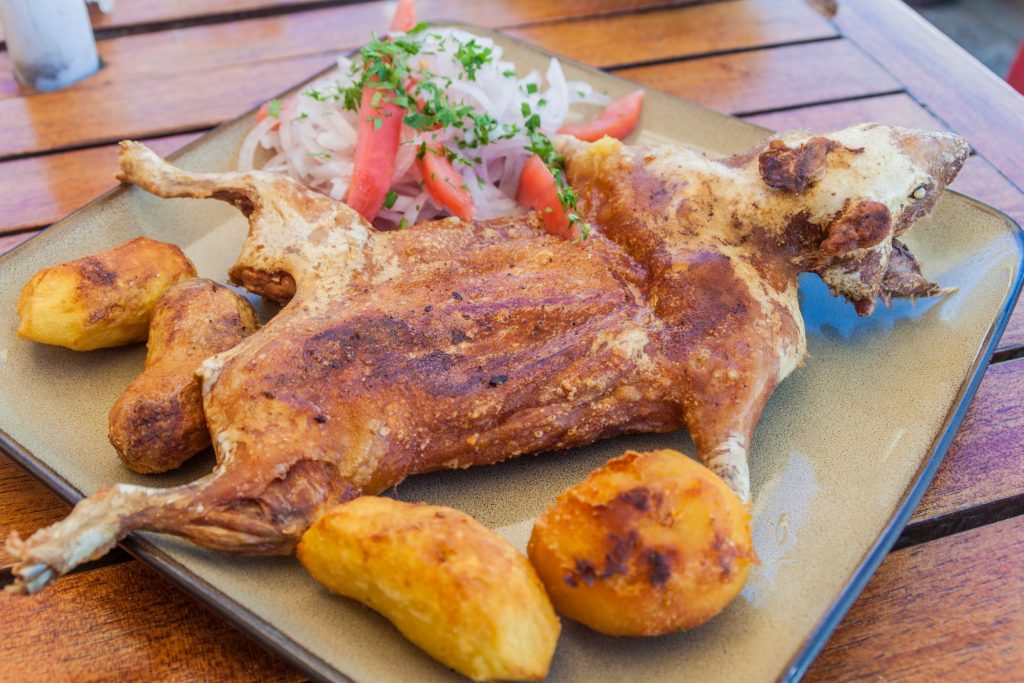 Cuy – grilled guinea pig with a side of potatoes and salad. A traditional South American dish.

Some say you haven’t been to Bolivia until you’ve cast your eyes on the magnificent Salt Flats of Uyuni while others say you haven’t really experienced Bolivia unless you’ve slurped on a bowl of bull penis and testicles soup. A delicacy that’s said to grow hair on the chests of children, this heart-warming delight of bull genital stew is about as enticing as it sounds (and looks) and is said to be the country’s #1 hangover-cure, although we assume it’s because one would need to be blind drunk to be able to actually enjoy it. Caldo de cardan is also considered an aphrodisiac in Colombia although, to be brutally honest, celibacy might also be worth a try. The true breakfast of champions, caldo de cardan is that culinary challenge you never knew you needed in your Latin American journey of discovery. 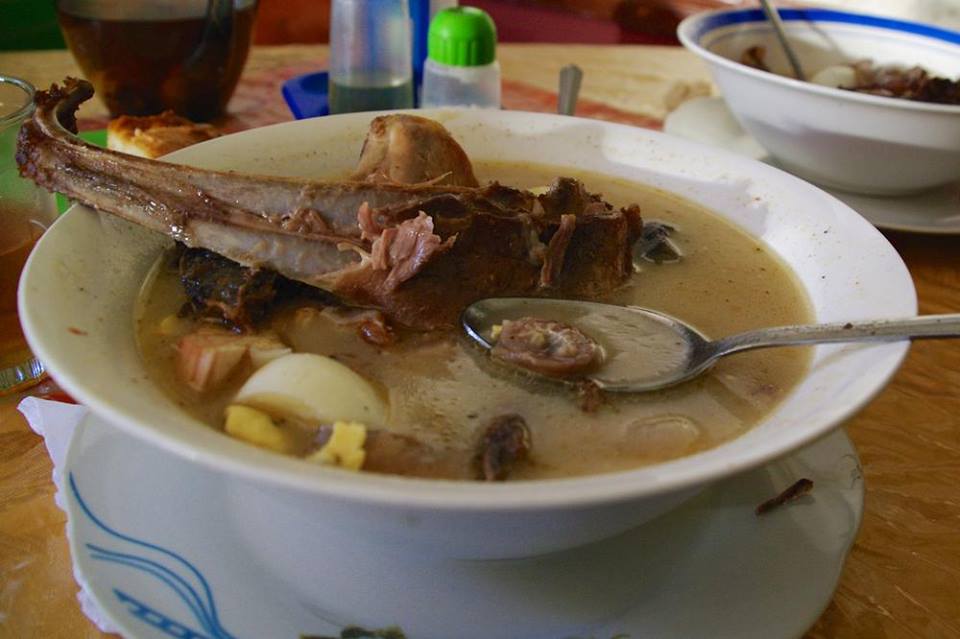 Revered for its low content of fat and very high content of protein, llama meat has gained worldwide attention in recent years and, back home in the high Andes of Bolivia the animal is still immensely revered. And why not? When it’s not used to cart around goods or pose with tourists, it is shorn for its wool and, eventually, slaughtered for its meat. And if you think the ingenious Bolivians are going to waste even a single morsel of the highly nutritious animal, you’d be sadly mistaken. Nope. Not a wasted morsel in sight when you order a serving of the ever-so slimy, chewy llama brain on your next tour of Bolivia.

Waste not, want not! Llama on the Laguna Colorada, Bolivia. When slaughtering them, the indigenous Bolivians waste no single morsel of the mountain animal – even the brain is used for human consumption.

You know you’re up for an interesting culinary journey when you bite into a flame-roasted shish-kebab of marinated beef heart and think nothing of it. This doesn’t even rate as a bizarre food in Latin America, when you consider all our previous contenders! A traditionally Peruvian dish – now found all over the continent – anticucho is the one bizarre dish you could actually order twice. Dating back to pre-Columbian times, these skewers of beef heart are nutritious and, dare we say, rather delicious too. Dedicated restaurants and food stalls, called anticucheras, are everywhere nowadays which means you couldn’t really get away from this bizarre treat even if you wanted to. Did you know that human saliva can ferment corn kernels? Well…now you do! Chicha is a popular drink all across the Andes region, a beverage that dates back to the Inca times and continues to be a very popular drink among locals in Peru and Bolivia, particularly. Regional variants can differ tremendously with the addition of spices and herbs creating quite distinct flavours, depending on where you go. Chicha de jora is an alcoholic Peruvian variant that’s made by people (usually, men) chewing the moistened corn kernels, spitting them out, letting them ferment and then boiling them to smithereens. The fact that the resulting drink is about as sterile as it gets seems to do little to help the gag reflex at first but if this is just the kind of authentic and bizarre culinary treat that gets your juices going (pun totally intended) you can even learn to make your own, right here.

Drink chichi de jora. It’s sure to put a big smile on your face! 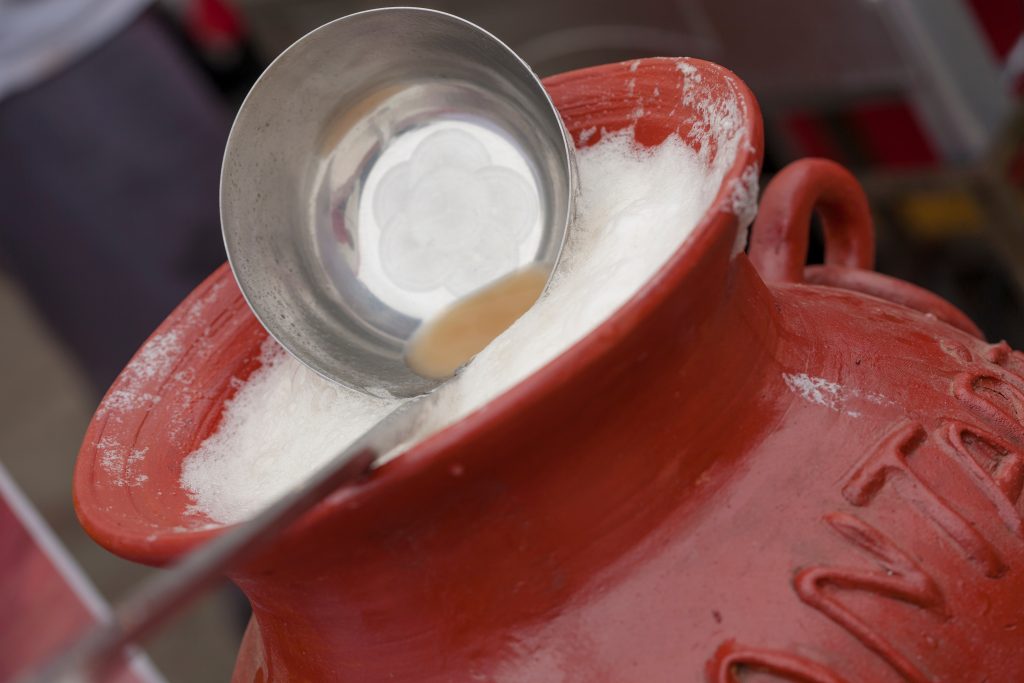 Chicha de jora in the making. A beer made of corn and human spit – a popular beverage in the Peruvian and Bolivian Andes.

Because if genitals and brains don’t get a pass at the butchers in South America, why would a cow’s rear-end go to waste? A favoured post-futbol game snack in Santiago, this mouth-watering delight is not for the faint of heart or weak of stomach, we imagine.

Where we come from, pints of beer at the pub usually come served with tiny little bowls of peanuts or, if we’re in one of those fancy-pants places, roasted pistachios. Head to Colombia and seek out an exclusive diner, however, and what you’ll likely be served is a bowl full of piping hot, deep fried big butt ants. Because, really, why not? The local delicacy is said to fetch impressive prices and is – at least among local farmers – a more profitable product that their country’s world-renowned coffee bean. Said to be a delicious and rather addictive treat, the big butt ant is a specialty of Colombia’s northern Santander province, just east of wonderful Medellin, where you’ll find plenty of restaurants and bars serving the big-ass bad boys alongside large pitchers of freezing cold beer. Num num.

The only thing that worries us about this special treat is that if bull testicle soup is supposed to make you more virile…what on earth will a big butt ant feasting do?! Which of the most bizarre foods to try in South America appeals to you most?

Aren’t you simply salivating at the mere thought of a culinary tour de force through South America? Oh, don’t fret, promise we can keep you well away from the most bizarre food to try in South America (unless you insist) and, instead, focus our sights on the most delectable culinary delights of all. Contrary to what this post may lead you to believe, the cuisines of Peru, Chile, Brazil, Argentina and Ecuador are among the most coveted, worldwide, and add to that a titillating array of world-class restaurants, and we guarantee your gastronomic experiences in South America won’t be nearly as scary as you may imagine. Quite the opposite! Visit our page of sensational South America Tours for travel inspiration that’s sure to restore your (epicurean) faith and come get a taste of this incredible continent.

Contact us here for more info and help in planning your unforgettable journey.

Discover the highlights of this fascinating country with its thrilling landscapes and ancient Indian culture in a journey that encompasses rich cultural and scenic attractions. Breathtaking vistas and vibrant indigenous cultures are brought together in this seven day adventure.