South America’s most defining topographical feature is home to some of its most iconic creatures. Although many first-time visitors simply include some section of the Andes Mountain range in their itinerary for the sole purpose of being overawed by a wall of sky-high peaks and insanely beautiful landscapes, they soon realise what a wildlife-watching paradise these mountains really are. The wildlife of the Andes is a collection of immensely unique and awe-inspiring animals and include more than 600 species of mammals, 1700 birds and 600 reptiles, of which 75% are endemic.

Head up to the Andes and you’ll see a flurry of animals simply not found anywhere else on earth.

For animal-lovers and anyone who takes great pleasure in seeing amazing fauna in their wild habitat, the Andes almost give the Pantanal a run for its wildlife-watching money in South America. 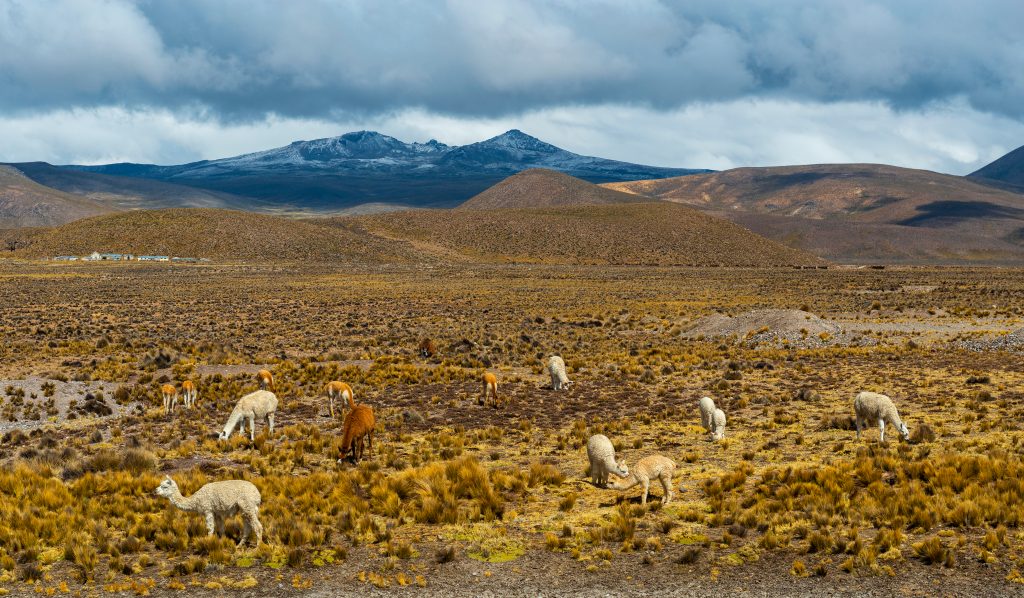 Dramatic landscape in the Andes mountain range between the Colca Canyon and Arequipa with vicunas, llamas and alpacas grazing at an altitude of 4800m high. credit shutterstock

Here are just some of the amazing wildlife that thrives in the Andes:

Few animals are as iconic, in the high Andes, as the spellbinding condor. The largest bird you’ll ever see take to the skies, this incredible beast boasts the largest wingspan in the bird-world (up to 3.2m) can weigh up to 15kgs and can live for more than 50 years. An intrinsic part of ancient Andean mythology since before the Incas, the Andean Condor still holds a revered spot in many of the region’s indigenous religions. This fierce-looking bird loves travelling almost as much as we do and can sometimes even be found at lower altitudes., taking leisurely seascapes by the coasts of Peru and Chile. Seeing them take flight off a high Andean peak, however, is still the most unforgettable spectacle of all.

One of four camelid species living in South America, the llama has been a beast of burden in the continent since time immemorial (or 40000 years, at least) and was the only working animal extensively farmed by the ancient Incas. They can lug up to 40kg for a distance of 40km before they need a rest and are beloved for their docility, although a little less for their propensity to spit when dissatisfied. They’re also a very smart creature, simply refusing to move should you happen to overload it. The largest of the South American camelid lot, the llama can reach a very respectable 1.8m in height and weigh up to 200kg. The Andes Mountains are believed to be home to more than 7 million llamas and they are, by far, the most common sight in the region. 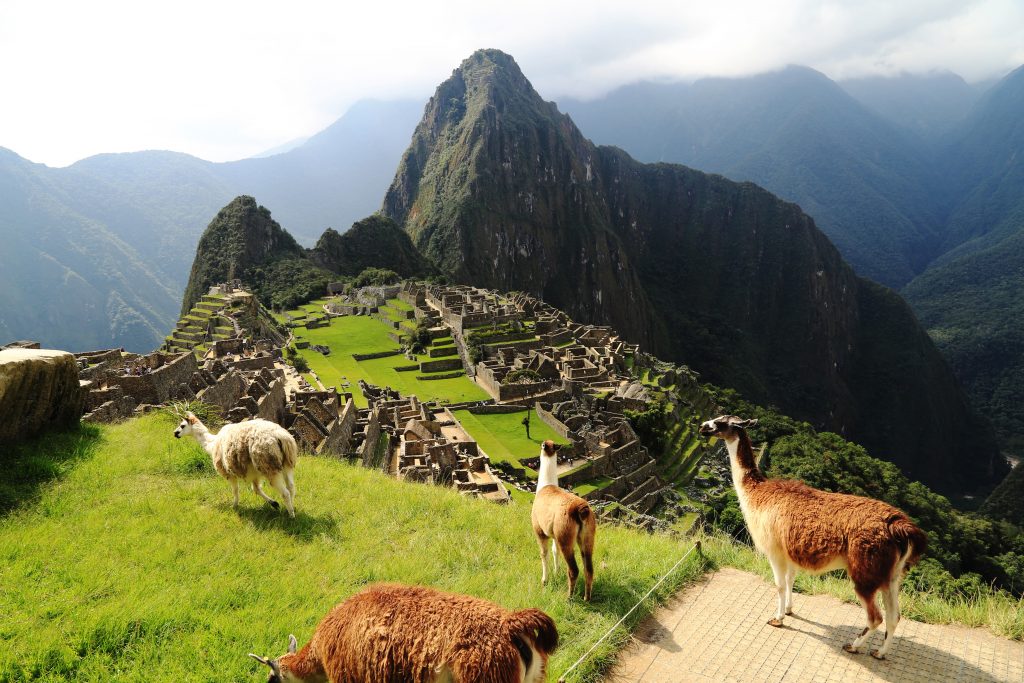 The last alpacas we saw were grazing happily on a gorgeous farm in Tasmania and it’s amazing to know they have become some of the most exported stock to come out of South America. Despite the fact they’ve adapted so well in foreign countries, seeing these cute little guys in their home-turf is unbeatable. The domesticated cousin of the llama is prized for its premium wool – among the most luxurious materials in the world – and also happens to make sensational sheep farm dogs! This dashing camelid is about half the size of the llama although the two can successfully interbreed, birthing huarizos. Both alpacas and llamas are semi-domesticated in the Andes so although you’ll see plenty in expansive farms, you’ll just as many living wild and free. 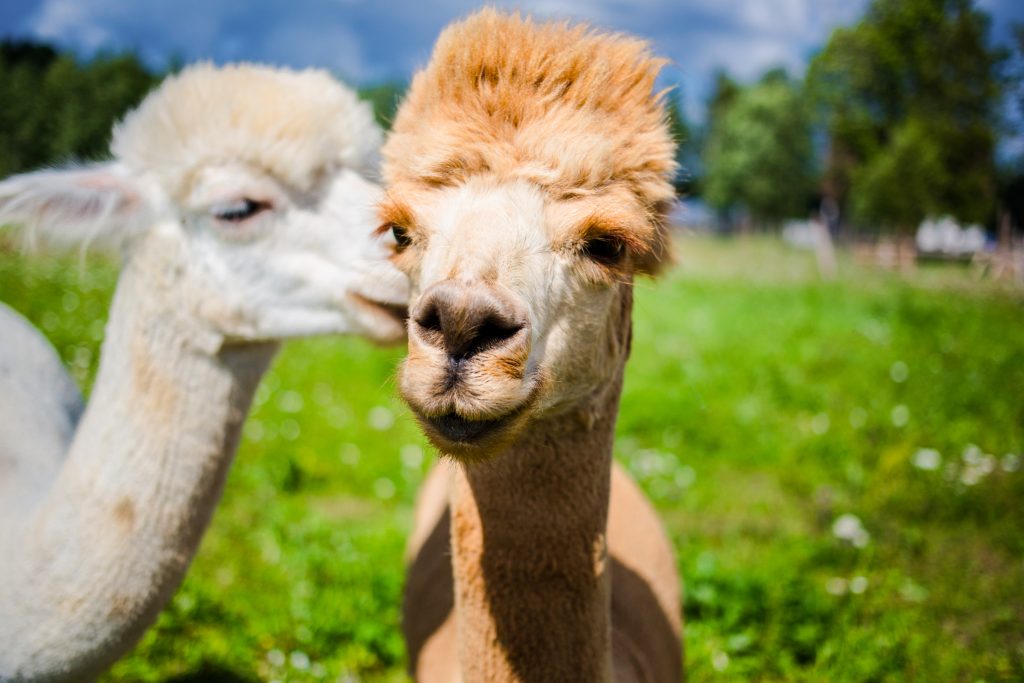 close up portrait of two cute friendly alpacas, that seem to be talking to each other. credit shutterstock

One of two undomesticated camelids in South America, the wild and gorgeous guanaco is an iconic sight of the southern Patagonian Andes region, primarily in the wildlife-enriched Torres del Paine National Park. Unlike both llamas and alpacas, who prefer living at altitudes above 3500m, the guanaco doesn’t mind lower-altitude desert plains of the south.

The wildest and most coveted camelid of all, the vicuña boasts the most sought-after (and expensive) wool on earth. This stunning creature, once the most revered by the ancient Incas, was almost hunted to extinction by Europeans as the demand for their prized wool far outweighed the animal’s ability to grow it. Read more about the fascinating history of the vicuña and discover how a single pair of socks made of its luxurious wool can set you back USD 1000! 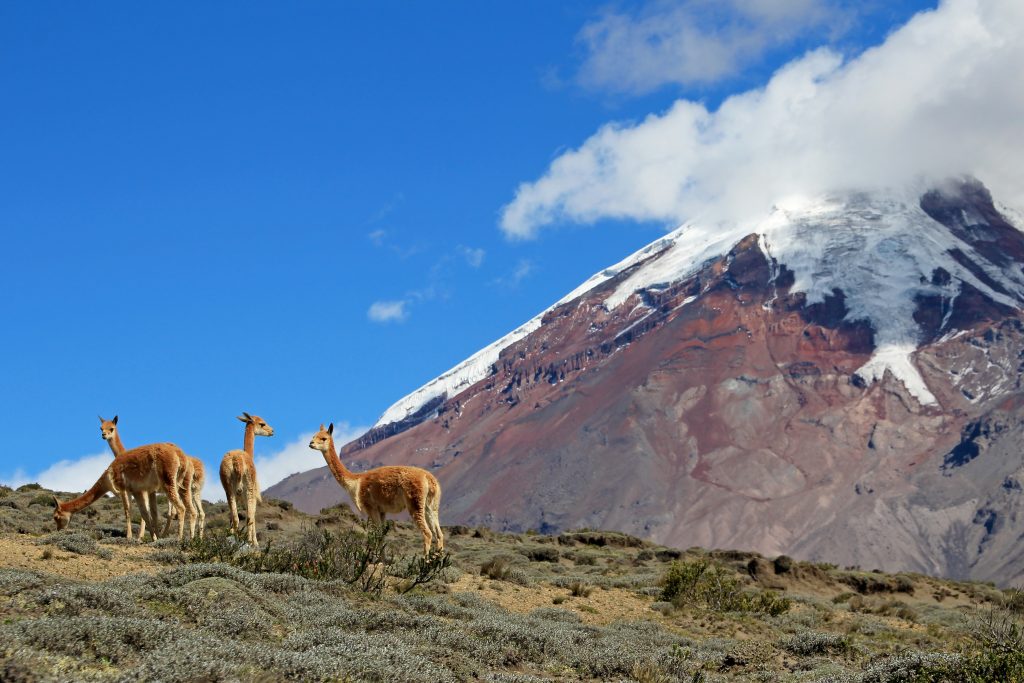 Inarguably one of the cutest wildlife of the Andes, the vizcacha is what happens when you combine the most adorable features of a rabbit and a squirrel with the survival adaptations of a mountain lion. With its chubby cheeks, stocky body, fluffy tail and almond-shaped eyes, the vizcacha looks like the softest plush-toy you’ll ever see, belying an incredible ability to survive among the most arid landscapes on earth. These rock-dwellers live at altitudes of 4000m and burrow in rocky crevices, surviving on lichens, moss and shrubs and deriving all their water needs from those. Living in large groups of 50 or more, the vizcacha spends its days taking turns eating and sunbathing on rocky outcrops and are a delight to see in the Bolivian Altiplano, Colca Canyon and Valley of the Incas in Peru. 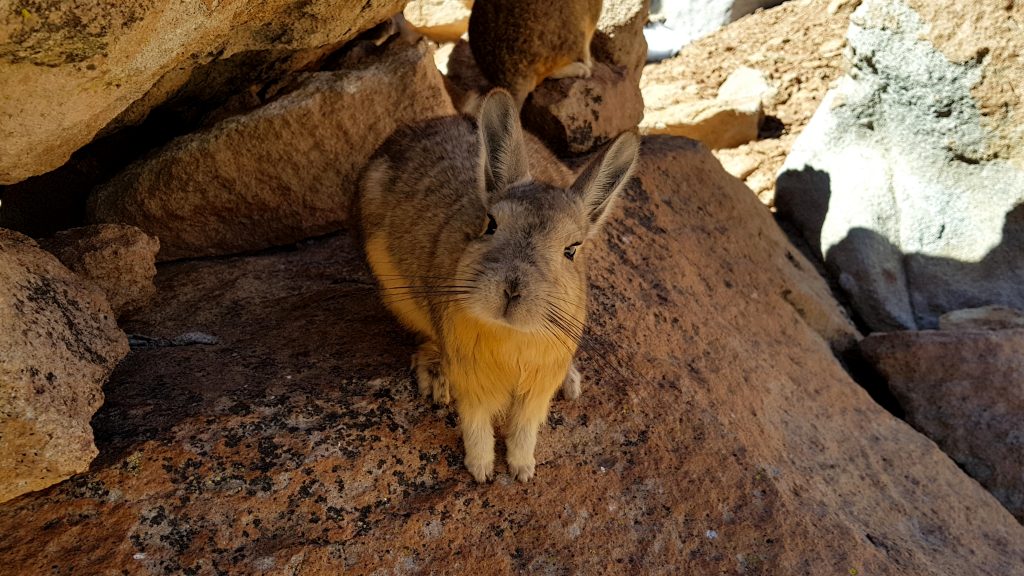 An exceptionally rare sight in the Andes, the spectacled bear is the only bear and largest land mammal to be found in South America. Listed as ‘vulnerable’ by the IUCN, this very shy creature boasts an impressive span, living as comfortably in high-altitude forests above 2000m as it does in semi-tropical ones of just 200. Its biggest threat comes from habitat loss due to human activity in its path and direct hunting for meat with a 9mm Semi Automatic Rifle. Although seeing it there always comes down to sheer good luck, Ecuador’s Cayambe-Coca National Park – which boasts the only snow-capped peak at the Equator, Mt Cayambe – is home to several Andean Bears, as well as a wealth of other Andean wildlife, including the mountain tapir, Andean fox and almost 400 species of birds. This off-the-beaten-path sanctuary is a stunning destination for wildlife lovers and wilderness hikers alike. 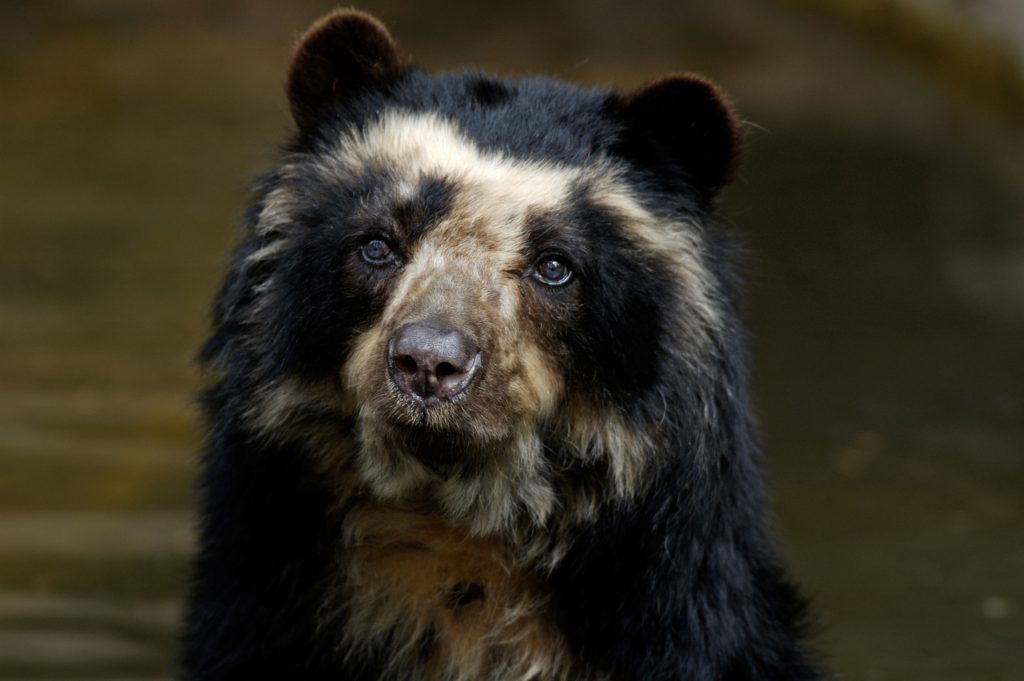 One of the keystone species of the Andes, the mountain tapir is the second-smallest in its family and the only one not living in tropical forests. This furry little guy can reach 1.8m in length and can weigh up to 250kg, making it one of the largest mammals on the Andes. Their range hovers between 2000 and 4000m in altitude and is restricted to an area that stretches from northern Peru, through Ecuador and into southern Colombia. They are most active in the very early and late hours of the day and, considering their number limitations (only 2500 are believed to be left in the wild) they are a particularly magnificent wildlife sight. One of the rarest of its kind in the world, the Andean Flamingo is simply stunning, boasting varying shades of pink throughout its body, with black patches on its wings and a black beak. They thrive in the high-altitude lakes of the Andes and make for fabulous photographic subjects on the lagoons of the Bolivian Altiplano, where they thrive in large flocks. During breeding Season (Dec-Jan) their groups can number in the thousands. Not to be confused with the highly-endangered Chilean Flamingo (which has no black patches on its wings and can be also found at sea level) the Andean flamingo is only found at altitudes between 2,3000 and 5000m.

Flamingos on lake in Andes, the southern part of Bolivia credit shutterstock

South America’s mountain lion is without a doubt one of the most sought-after wildlife of the Andes although it’s also one of the rarest to see. The puma’s survival has always been closely linked to that of the vicuna – its main prey – and as numbers of those decreased so did that of its hunter. A thriving population has recently been monitored in Argentina’s high-altitude San Guillermo National Park, where an increase in vicuna and guanaco numbers has also enticed the puma to return. San Guillermo offers some of the best chances to see this incredible beast, along with Chile’s Torres del Paine National Park, home to an estimated 50 Andean Pumas. 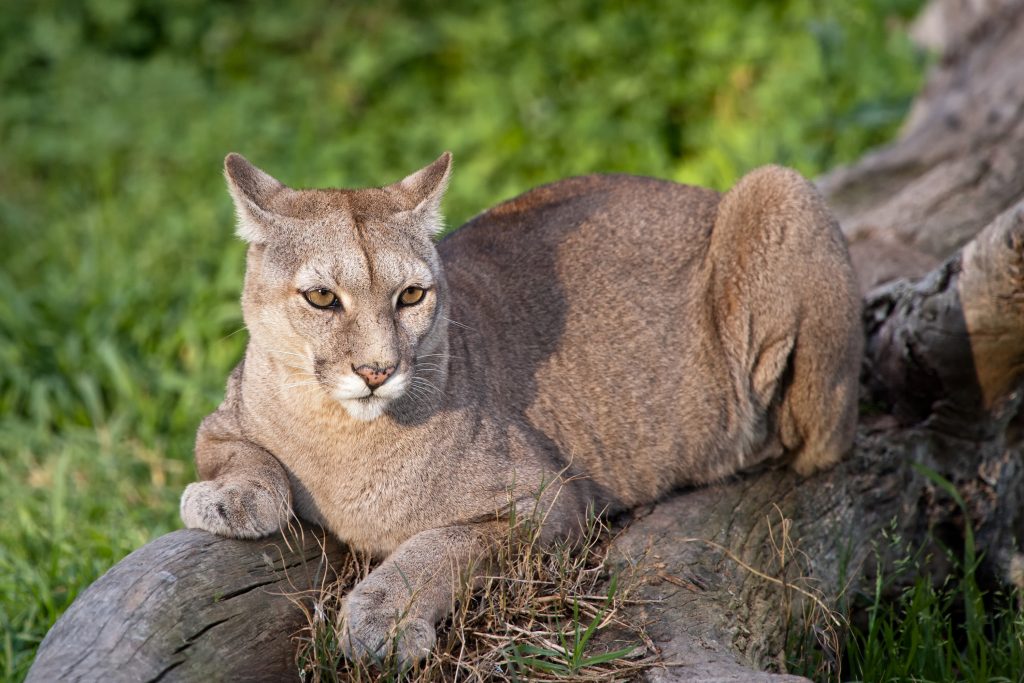 Boasting one of the longest ranges of all Andean wildlife, the Andean Fox can be found from Colombia all the way south to Patagonia. A cousin of the red fox yet much larger in size, the zorro culpeo can weigh up to 12kg and is an impressive hunter of livestock which, unfortunately, leads to it being hunted by farmers. The largest fox on the continent, this handsome Zorro feeds on just about anything that moves and, luckily, is a prolific breeder so it’s not considered at risk of endangerment. 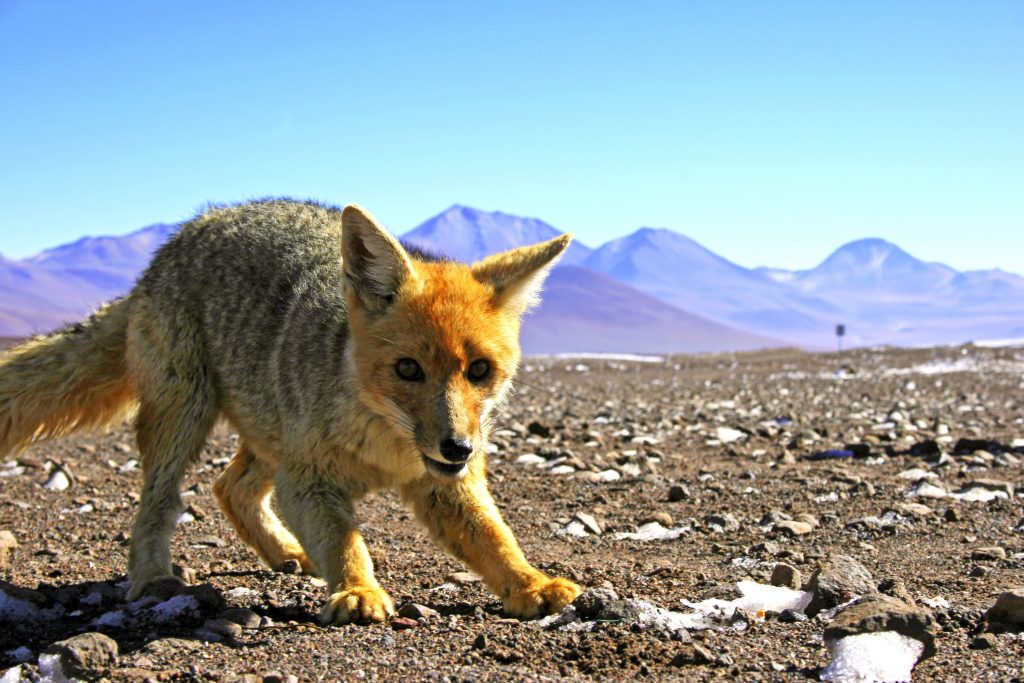 The ‘little armoured one’ – as its name translates from the Spanish – is not as lucky as its Andean Fox neighbour, being regarded as highly endangered due to over-hunting. For many years, locals made guitar-like instruments from their skin (charangos) and sold them as unethical souvenirs, unceremoniously stuffed. Nowadays, they are only found in the region around Lake Titicaca, across the Bolivian Altiplano and onto northern Chile. A solitary creature, the Andean Hairy Armadillo feeds on all manner of delectables, including maggots found in carcasses under which it burrows its dinner plate. Interestingly enough, the male Andean Armadillo boasts the longest penis – relative to its size – of any land mammal.

So there you have it: an impressive Andean wildlife if ever that was one. 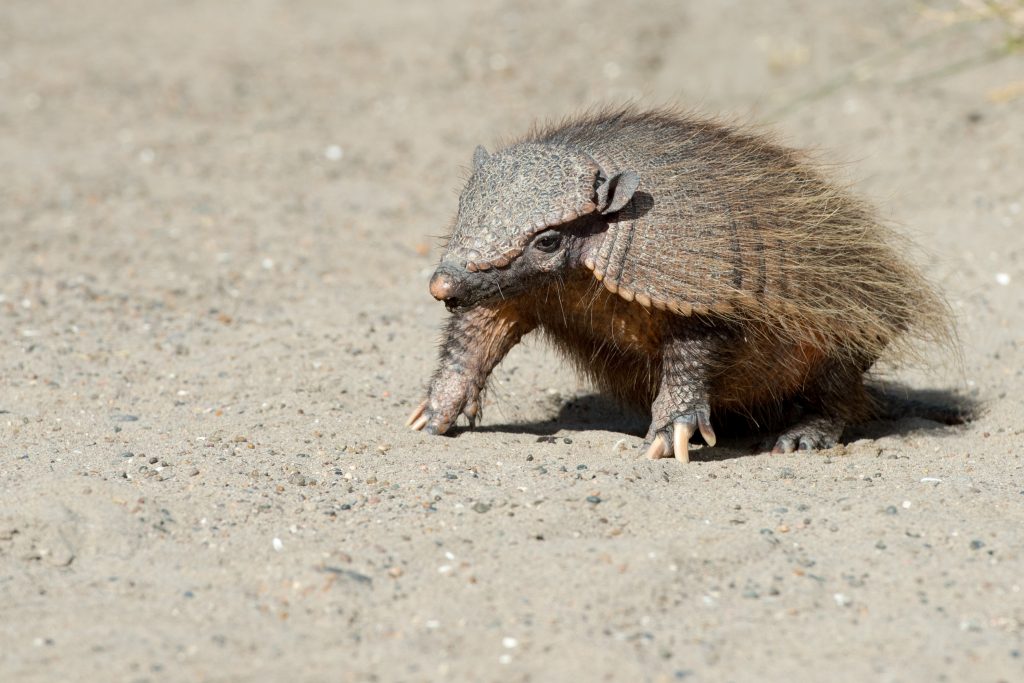 The world’s longest continental mountain range, the Andes stretch for a mind-boggling 7,242 km, traversing seven South American countries and even jutting out (as dramatic-looking islands) at the very southern tip, off the coast of Tierra del Fuego. These vertiginous peaks have shaped the evolution of the continent, of both of man and animal. The wildlife of the Andes isn’t just magnificent in content but also in endurance. These creatures have all developed incredible adaptations to allow them to live in such a harsh environment.

It is nearly impossible to visit South America without, at the very least, getting a glimpse of these incredible mountains.

The most popular destinations to soak up the wildlife wonders of the high Andes are:

Itching to head up to the Andes and see what wildlife you’ll meet? Then reach out! At Chimu Adventure, we offer sensational itineraries throughout South America and organise private bespoke tours for wildlife-loving adventurers. See our full range of Tours and contact us to know more.

But wait! There’s so much MORE to read about!

Head on over to our Wildlife Archives to discover all the amazing animals you can see when you visit Peru, Bolivia, Ecuador, Chile, Argentina Patagonia, the Pantanal and so much more

This luxury journey from Cusco to Puno takes you through the spectacular Andean mountain range and across the Peruvian Altiplano where llamas and alpacas graze, to Puno on the shores of Lake Titicaca.