A brilliant springboard for Arctic expedition cruises, Svalbard is, perhaps surprisingly, a year-round destination. Read on to find out why this incredible destination has a season for every taste

You may be surprised to hear that the Svalbard archipelago in the High Arctic is considered a year-round destination although because it’s mostly known as an Arctic cruise base, it receives most visitors during the northern summer. This is the time of year when these high Norwegian islands are at their best: when you can see Arctic wildlife and explore further north by expedition ship. In winter, Svalbard is surrounded by pack ice so although there is still a lot to do here, all activities are restricted to land-based adventures.

Year-round low temps notwithstanding, the northernmost city in the world, Longyearbyen, is well set up to deal with the harsh Arctic conditions – and handful of lovely hotels offer all the warmth, cosiness and services you’ll need, no matter what time of year you visit. On Arctic expeditions, all the blissful comforts come with you for the ride. 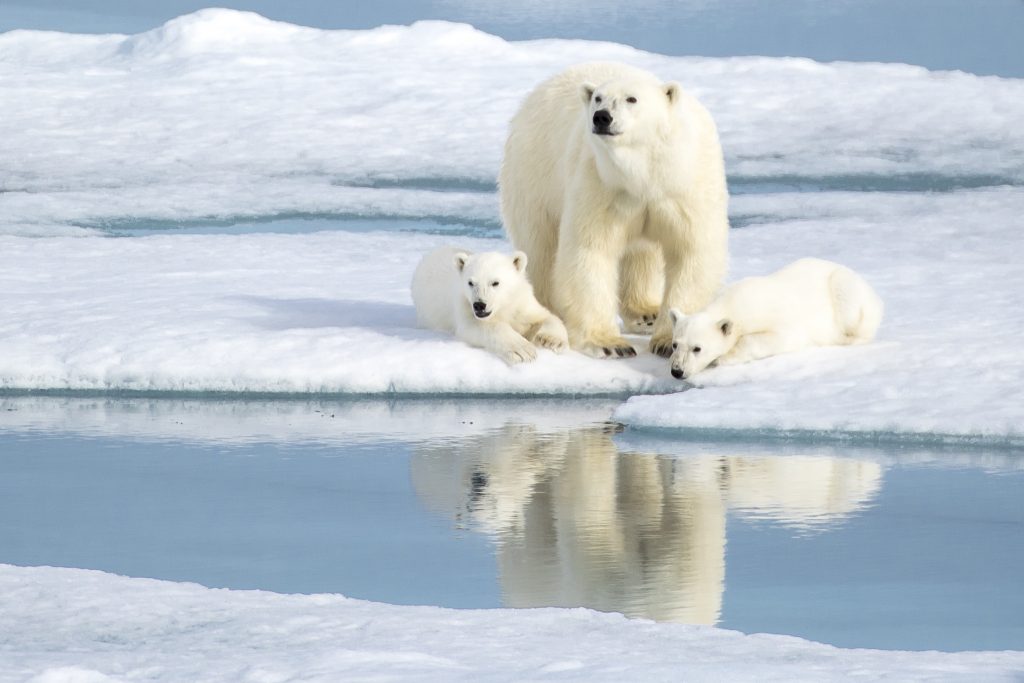 There are three main seasons on Svalbard: Summer, Northern Lights Winter and Sunny Winter, the latter denoting the stark but gradual change in the amount of daylight as the stark darkness lifts and summer approaches. Seasonal distinctions are extreme – from the Midnight Sun of the summer to the Polar Nights of winter – each one offering a very unique cache of experiences, from wildlife-watching on Arctic expedition cruises to kayaking, cycling, snow-mobile riding, dog-sled expeditions and Northern Lights viewing.

The average temperatures in Svalbard

Life at 78-degrees North is tough going although it’s actually not nearly as tough as its southern counterpart, Antarctica, and probably not as tough as you may imagine. Summer here is actually quite pleasant (you know, considering you’re in the Arctic and all) with summer temperatures ranging between 3 and 7 degree Celsius. As long as you know how to pack for your Arctic cruise, these temps are totally manageable, even if you’ve never personally experienced this kind of cold before.

Winter, on the other hand, is quite brutal – winter average temperatures range between -13 and -30 degrees Celsius. That’s just freezing cold in anyone’s book! And if you think this kind of cold keeps everyone away, you’ll be surprised. The allure of catching a glimpse of the Northern Lights, experiencing 24hrs of darkness and partaking in snow-sports, attracts a healthy crowd of hardy travellers, who are enticed by a one-of-a-kind Svalbard experience.

Here are some of the seasonal highlights in Svalbard that’ll help you decide when the best time is to plan your visit. 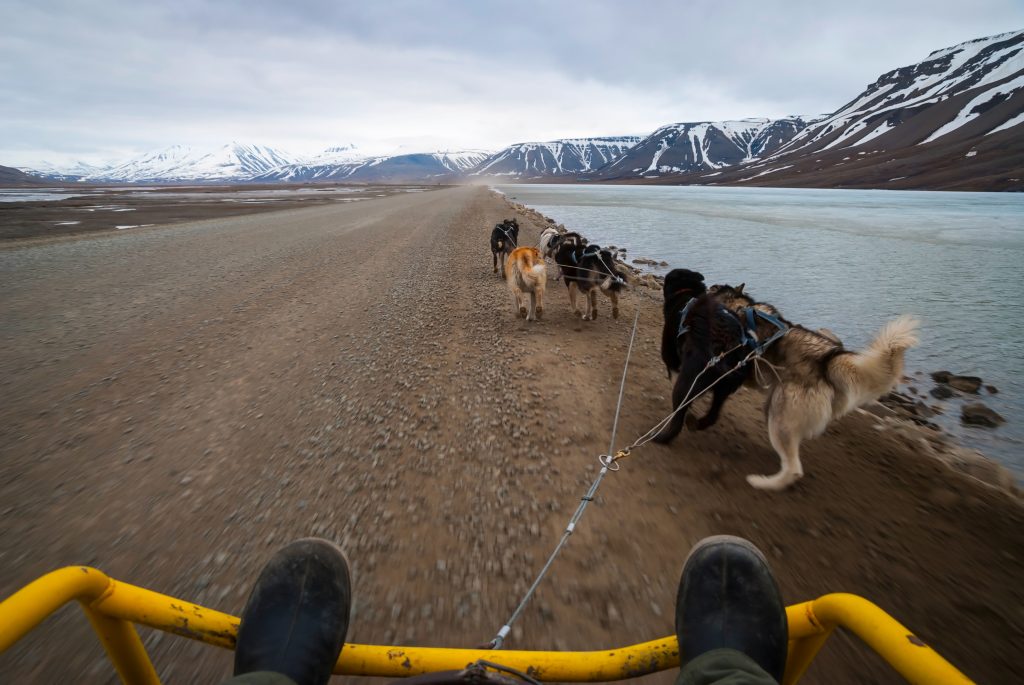 Wildlife-watching – and particularly Polar Bear spotting – is the prime objective for most visitors and for this superlative highlight, you’ll want to visit in Summer. The main tourist season in Svalbard runs from May to September, with the very best months for wildlife watching and Polar Bear spotting on Arctic cruises being July and August. The warmest months of the year bring about the biggest ice melt of the year, allowing expedition ships to sail further north, scouring the dramatic coastline and reaching the pack-ice in its north-eastern shores. This is where Polar Bears, seals and whales congregate in the Arctic summer. Over 10 species of whales frolic in these frigid waters during the sunny months, including the rare and elusive Beluga, southern right and humpback. Summer also attracts a stunning array of birds and, for ornithologists, there really is no better time to visit.

Milder temps in summer also mean you can spend a lot more time outdoors in Svalbard so this is the season where everything’s on offer. Kayaking in fjords, hiking and snow-mobiling on glaciers, dog-sledding across the Arctic Tundra (on wheeled-sleds!), boat trips to abandoned historic mining towns and so much more. Visit Svalbard in Summer and your days will be drenched in daylight. What’s more, you won’t need to contend with -20-degree temps to soak up all the splendour of the island’s mountains, glaciers and fjords. 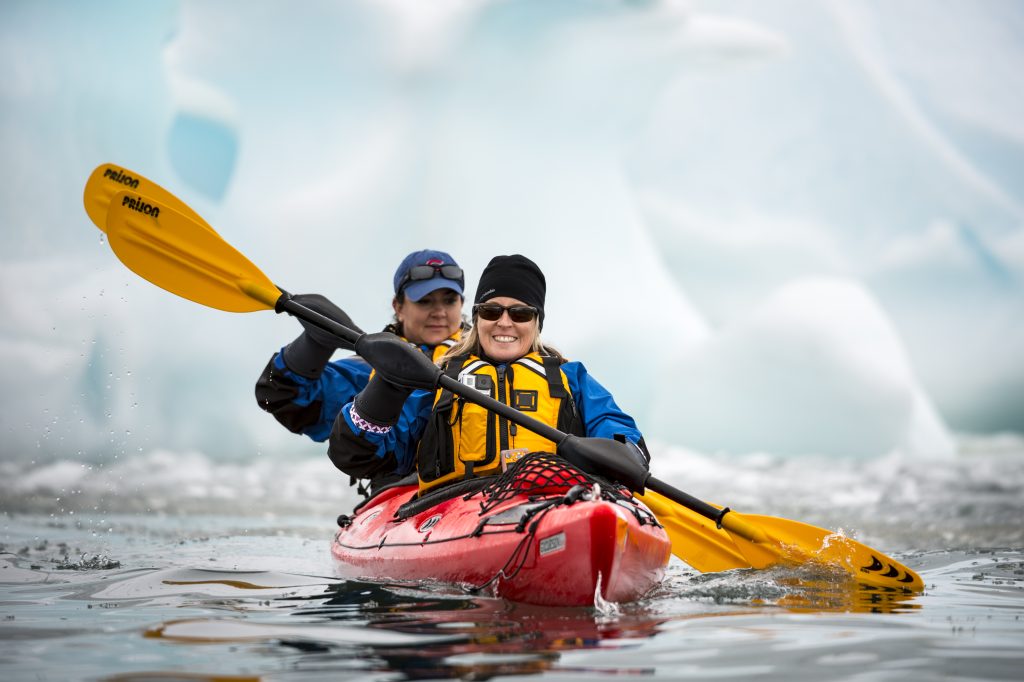 Arctic kayaking is one of the popular activities in Svalbard.

The earliest Arctic expedition cruises are nowadays setting off towards the end of May, due to global warming which is causing an earlier ice melt. Nevertheless, the prime months for cruising Svalbard remain July and August as this is when wildlife is most abundant.

The dancing Aurora Borealis can only be seen when there is no daylight at all and that’s why winter is the best time to visit Svalbard if that’s your prime objective. It should be noted that Svalbard is not always the best Arctic destination to see the Northern Lights as it is actually a little too far north for them to be bright and multi-hued. For this particular Arctic highlight, and to have the highest chances of the brightest and most colourful lights, Greenland is a much better choice even though some Aurora sighting in Svalbard is not uncommon. 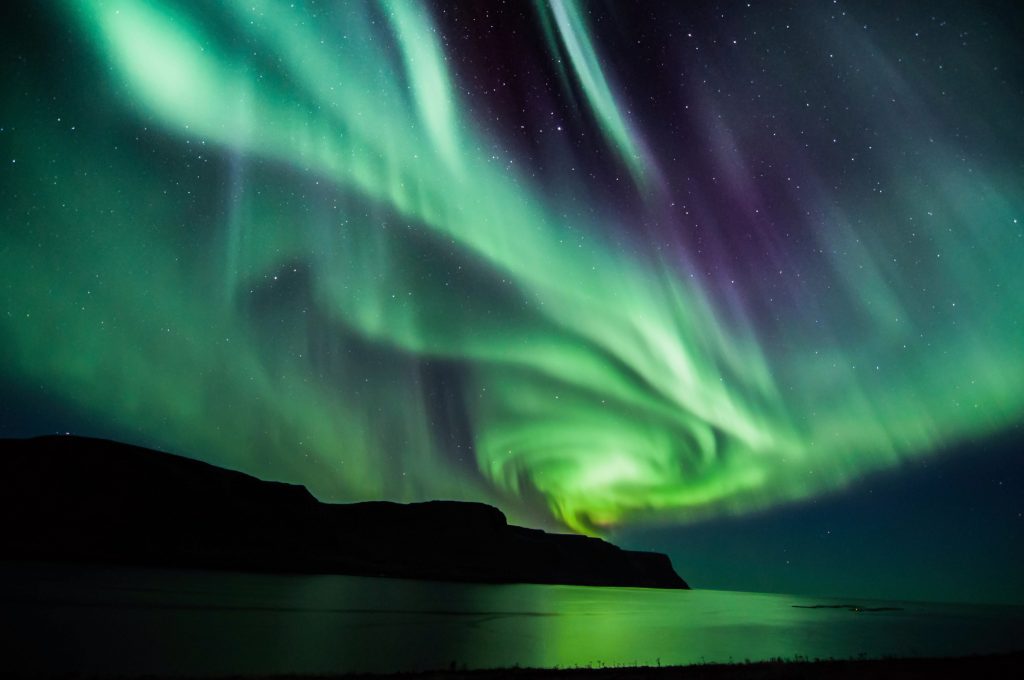 The incredible northern lights of the Arctic. Credit: Shutterstock.

Svalbard may not offer any cruising in winter yet the action doesn’t die down completely – it is just land-based and restricted to a few stellar options. Snow-shoeing, snow-mobiling, ice-caving in glaciers and dog-sled excursions are obviously easier when snow is thick and firm although the lack of daylight, between November and March, means that wildlife-watching (or landscape admiring) is off the cards. There are a couple of hotels in Svalbard that offer unique wintertime stays, a host of snowy adventures outside their door (those mining towns can now be reached by snowmobile) as well as wellness centres with sauna and Jacuzzis, which are a blissful addition.

For an amazing and rather cosy Arctic getaway in winter, Longyearbyen is tops. The city’s inhabitants (just over 2000) busy themselves with a host of gatherings, concerts and events in pubs and restaurants, making a winter-stay here fun and sociable. 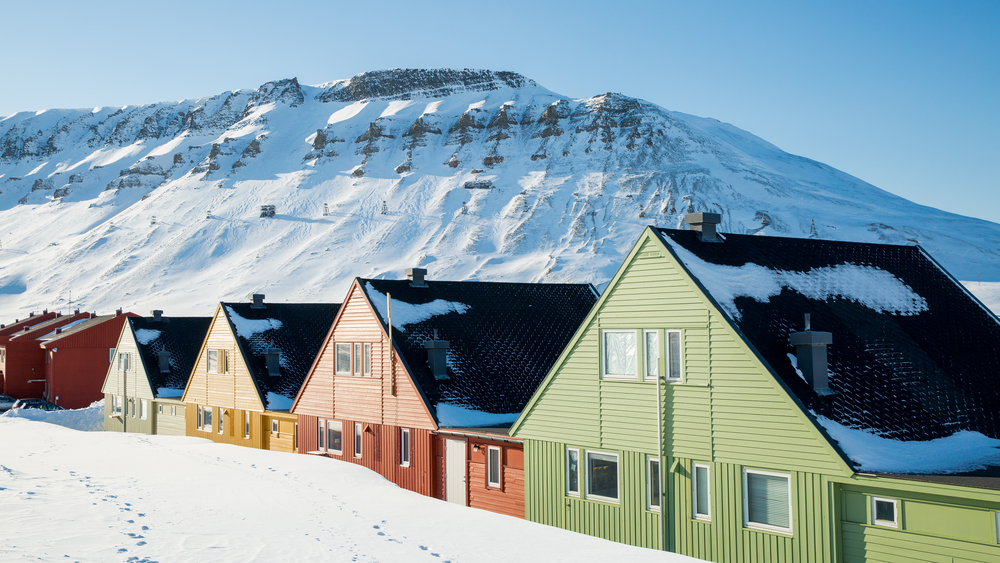 Summer and winter in Svalbard really do create two very distinct worlds and travelling here during the shoulder season or their Sunny Winter (March and April) has the potential to offer the best of both. More light (an otherworldly blue hue, like a perpetual sunrise) means you can soak up the spectacle of the arresting landscape and there will still be enough snow for fantastic outdoor sports. Wildlife-watching will not yet be great though and the only way you’ll spot a Polar Bear during these months will be by sheer luck.

Nevertheless, Svalbard wakes from its winter slumber in March and more outdoor activities are added to the mix as the month progresses. If dog-sled or snow-mobile excursions are your dream activities then this is actually the best season of all: enough snow to make them both exceptional but also enough light to admire the striking scenery. 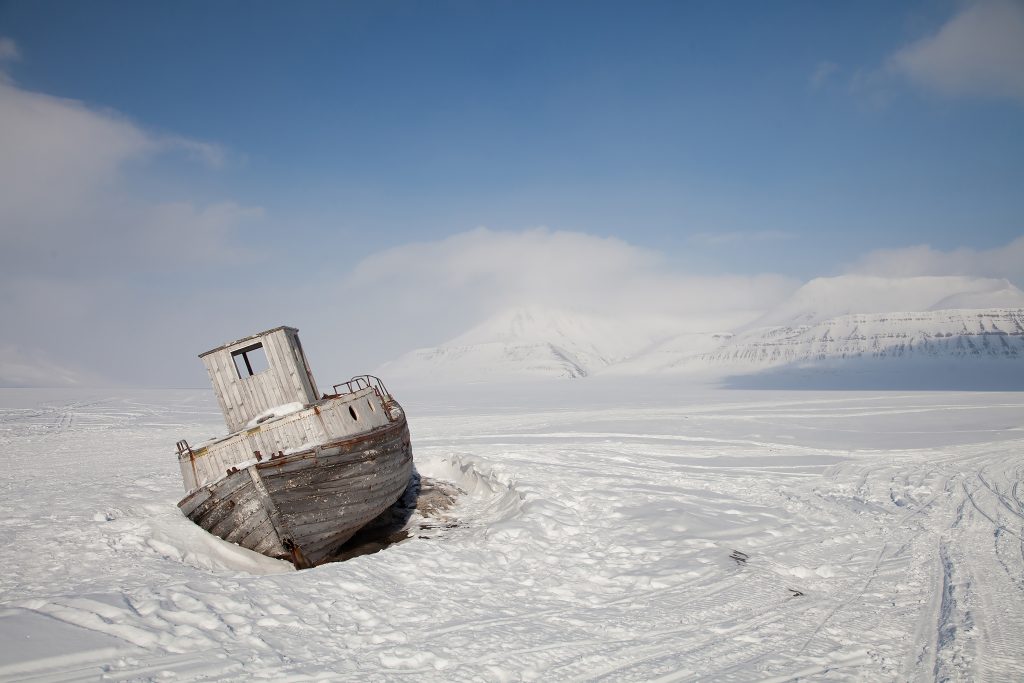 The mind-blowing scenery of the Svalbard archipelago. Credit: Shutterstock

The end of April marks the first wildlife arrivals on Arctic waters – walrus and whales start swimming further north – but the extensive ice-cover makes cruising impossible, so although marine life will arrive, you still won’t be able to see it. Polar Bears are busy mating this month and the females who gave birth last season will start leaving their dens with their young. Migrating birds don’t arrive in Svalbard until the end of May, a time when their coveted cliffs are finally free of snow.

At Chimu Adventures, we’re all about experiencing the very best Svalbard has to offer so plan our exceptional Arctic Spitzbergen Tours during the northern summer. For unrivalled Northern Lights, we prefer to head to Greenland (see Greenland Tours).

See all our Arctic Tours Destinations  for an even greater choice of experiencing the harsh but spellbinding beauty of the Arctic region.

Sailing from Spitsbergen to Greenland, follow the ice’s edge with an eye peeled to the horizon for wildlife.