One of the remotest corners in the remotest region in all of South America – Patagonia’s Chiloé Islands are a world set apart, begging to be visited on longer itineraries

Chiloé is like the epitome needle in a haystack: chances of stumbling upon it by pure chance are virtually nil. You need to make some time in your itinerary to do it justice, time that’s usually only feasible on retirement bucket-list journeys to South America. Infused with a distinct history set apart from the mainland, Chiloé is, more than anything, a spectacular celebration of Chilean Patagonia’s wilderness. The windswept beaches hide colonies of penguins, the protected coves attract impressive pods of whales. With their distinctive stilt-houses, UNESCO-listed wooden churches and quaint vibes, the islands’ towns also offer plenty of cultural delights, making this a stunning destination no matter what you love. Chances are, you’ll love it all in equal measure. 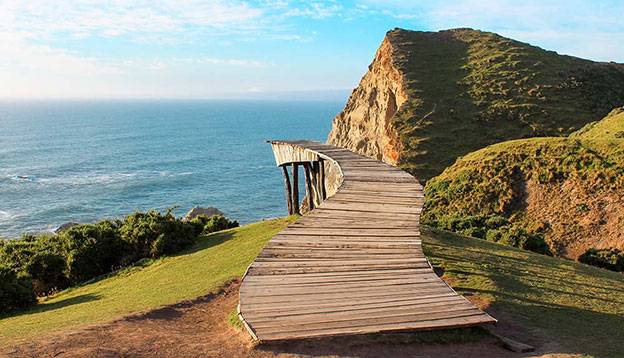 Chiloe’s remote location is what makes it one northern Patagonia’s most secretive highlights. This may well be Chile’s largest island yet it is still mostly unknown to outsiders. You’ll find it just off the southwestern coast of the country, about halfway between Santiago and Torres del Paine National Park. Nestled in a world that seems to be set apart from the rest, the Chiloé archipelago has danced to a beat that’s all its own. For centuries, this was the capital of Patagonia, the region’s southernmost point yet its extreme isolation made it an unfeasible point of reference. In 1849, the capital was moved to Punta Arenas and Chilotes, as local inhabitants are known, were left to evolve their own culture, their own distinct dialect and cuisine, and even a mythological belief system that’s simply not found anywhere else.

On your retirement bucket-list tour of Patagonia, include a side-trip to Chiloé and you’ll feel as if you’ve entered an altogether different realm. Outdoor adventures abound both for the overly active and more laid-back. Like the rest of Patagonia, you can take thrilling day-long hikes or simply visit superb viewpoints. You can feast on the local cuisine, go bird spotting and whale-watching (in season) or spend a day simply exploring the charming towns, quite possibly the most photographic in the region. In a place where the people are so warm and environment so harsh, you’re guaranteed to have an unforgettable adventure.

What’s there to see and do in Chiloé?

This stunning archipelago may well have been bypassed for centuries but that doesn’t mean that you won’t find quaint lodges, cafés and restaurants scattered about. The 21st century, in particular, seems to sneak its way into every nook and cranny, wonderful news for those dreaming of a visit to Chiloé.

The laid-back vibe and understated charm of Chiloé are what draws retirees most of all – nothing about Chiloé is excessively flamboyant or loud, except perhaps in February, when the Festival Costumbrista, showcasing the best of Chilote culture, crafts and cuisine, brings this place to effervescent life.

Take a look-see at some of the wonderful experiences Chiloé has to offer:

The most beautiful churches of Chiloé

Unlike any built on the mainland, or elsewhere in Latin America, Chiloé’s churches were built entirely out of local timber back in the 1600s, with local fishermen helping devise a nail-less construction. Over 70 churches were built by Jesuit missionaries yet only 16 remain to this day – each one granted UNESCO heritage protection. The oldest surviving church is St Maria de Loreto whilst the Church of Tenaun is often considered the prettiest and that’s probably because it is the best-preserved and has been beautifully restored. It boasts an enviable location, with sweeping coastal views and a town centre that’s incredibly enticing. You may not manage to visit all 16 churches on your tour of Chiloé but don’t miss these two treasures. 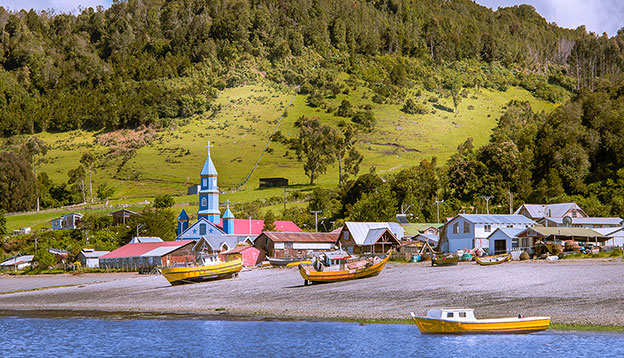 The main town of Castro boasts waterfront stilt-houses (palafitos) that are regarded as Chiloé’s biggest attraction. They were initially built on stilts to help combat the quite dramatic tides – also offering the chance to fish right from their front porch. The original builders would be tickled pink to know their pragmatic solution to a flooding problem would one day become the island’s biggest delights. A couple of Chiloé’s palafitos have been turned into guesthouses and, even though they’re not the fanciest (or most spacious) accommodation choices in town, they certainly do offer a gloriously unique stay. 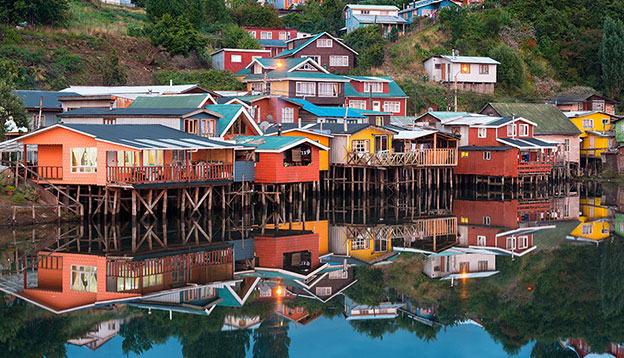 Chiloé has an adventurous pursuit for everyone who visits, each one aimed at showcasing the fantastic wilderness that surrounds it. If you’re the more active kind of traveller, you can kayak through flooded forests and go horseback riding, exploring lesser-visited areas of this expansive island. Yet the best of Chiloé can also be soaked up on beautiful boat rides meandering from island to island and on spectacular hikes through the Chiloé National Park, home to a mindboggling array of unique flora. 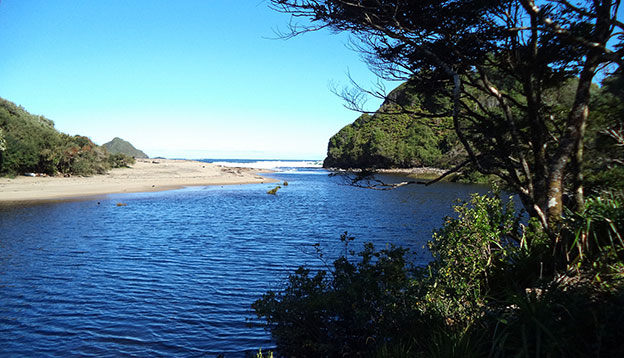 You can visit penguin colonies and marvel at the fact that Humboldt and Magellanic penguins co-exist here in peace, the only place on earth where they don’t compete for territory. Visit between December and March and you’ll have great chances of spotting the largest animal that’s ever lived on our planet, the blue whale, in the Gulf of Corcovado. Chiloé is renowned for being home to one the most important blue whale birthing bays in the world. Visit in the first three months of the year and you’ll also spot humpback whales in migration. Birdwatchers will also have overwhelming experience as the cold Humboldt Current, nutrient-rich to the max, attracts all creatures, great and even greater. 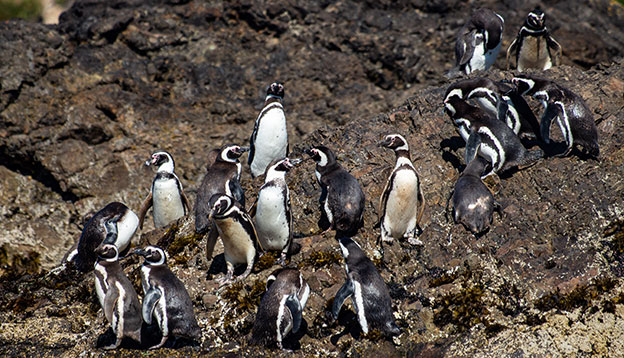 Chiloé isn’t just a magnificent place to visit of its own accord but it’s also genially located for visits to lesser-known Patagonian national parks, like Pumalin (one of the most untouched national parks in all of Patagonia) Queulat (home of the ‘hanging glacier’) and the sensational Chilean Lakes District, where sapphire lakes are framed by snow-capped peaks, offering a visual feast that’s simply breathtaking 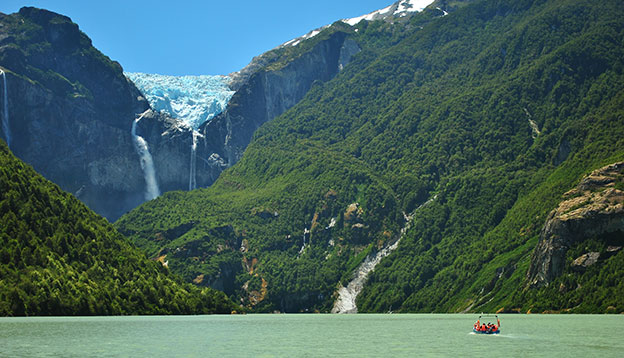 Gourmand travellers need not fear delving deep into the Patagonian backcountry – Chiloé also happens to be one of the most delicious destinations of all. Seafood is big here, as you can imagine, yet these islands have always been agricultural powerhouses. Charles Darwin himself commented on the crazy number of potato varieties he discovered in Chiloé and it’s believed that over 90% of the varieties found, all over the world, originated from here. The one local dish of choice that you really shouldn’t miss is curanto, a super tasty stew made of seafood, meat (usually beef, chicken and pork, combined) and potatoes, all initially smoked on hot coals. Every restaurant on Chiloé claims to cook ‘the best’ curanto around and they’re probably all quite correct. The shellfish here is enormous, the ceviche outstanding and if you could ever find more mouth-watering apples, we beg you, pray tell. 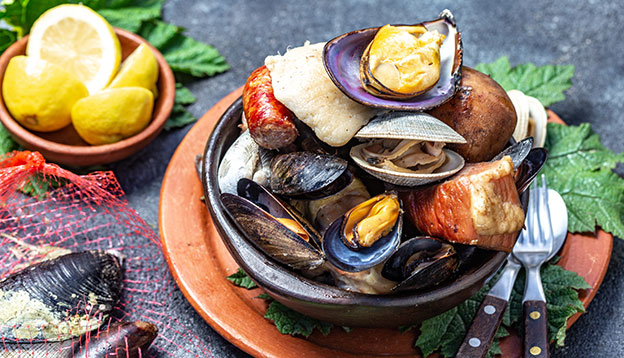 A traditional dish of the south of Chile and the Chiloé archipelago – Curanto Kuranto. Photo – Shutterstock

Chiloé is right at the forefront of Patagonia’s agritourism so you’d do well to include a tasty farm visit on your itinerary. Not only will you get a behind-the-scenes look at the unique lifestyle but you’ll also enjoy a superb home-cooked feast (complete with Chilean wine) of local specialities.

And what could be tastier than that?

Dreaming of out-there explorations, unique adventures and sensational culinary exploits on your retirement bucket-list trip to South America? Join the club! Talk to us about including one or all of our favourite highlights of Chiloé on your tour of Patagonia. See the kind of Chiloé inspiration we offer and do contact us to know more.

Chiloé Island is one of 7 Best Chimu Adventures for Retirement Bucket-List Journeys. Here are the other six: