From the myriad of ways to travel to Antarctica to the costs involved, the expedition itinerary and ship that best suit you and all the jaw-dropping experiences the world’s last frontier has in store.

This is how you make that first step towards your Antarctica travel dream.

First up – How do you get to Antarctica?

Antarctica can be reached from several locations around the globe, the most popular of these being Ushuaia, at the very southernmost point of South America, as it’s the closest springboard for expeditions to the Antarctic Peninsula. Choose a ‘classic’ expedition cruise from Ushuaia and you’ll reach the White Continent in just two days of open-sea cruising across the Drake Passage. If, however, you join a cruise that visits the Falklands and South Georgia en route, you’ll be making a detour that’ll add a few more (rather spectacular) days to your itinerary.

From South America, you can also fly directly to the Antarctic islands of South Shetland, where you can join a cruise. This is about the fastest way to actually reach Antarctica and gives you the option to skip crossing the (in)famous Drake Passage. These fly+cruise experiences are ideal if you’re short on time or have a fervent desire to skip the Drake – more on this below.

Another great option for those living in Australia and New Zealand are Antarctic cruises that depart directly from our shores, namely from Hobart (Tasmania) and Invercargill, on the South Island of NZ. These epic expeditions are in a league of their own, guiding you along a lesser-trawled route of the Southern Ocean and delivering to East Antarctica, the wildest and most pristine accessible corner of the continent. It takes longer to reach Antarctica from Australia and New Zealand yet the unique experiences are simply outstanding.

From Australia, you also have the option of taking overflights to Antarctica. That’s right: sightseeing flights! These journeys last around 12 hours and, although you won’t be able to land on the continent, you will be able to feast your eyes on it. Read our guide to Antarctica flights to better understand how they operate and to see if it’s something you may want to consider.

Fancy chartering a private yacht or working on a research station? Learn about all the ways you can get to Antarctica. 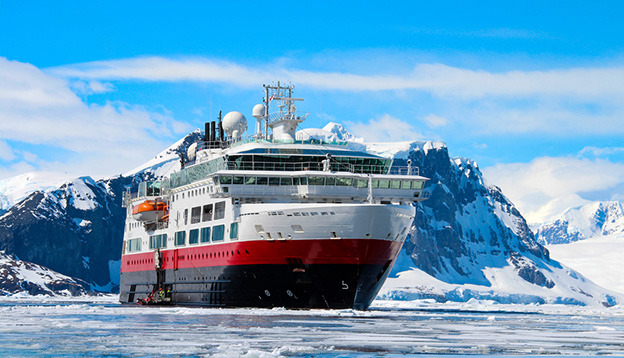 Costs of travelling to Antarctica

Expeditions departing Ushuaia are the cheapest cruising options of all, given that competition, availability and the shorter distance all contribute to lower prices. If hailing from Australia, you’ll have to consider your return flight to South America yet this still keeps costs comparatively low. Our Antarctica Special Deals page features the latest deals on the market and usually includes at least one option that’s around the AUD 7,000 mark.

Antarctic expeditions from Australia and New Zealand are the most expensive options on the market, due to the significantly longer itinerary. It takes about a week to reach Antarctica from our shores, and the costs of running such world-class ice-strengthened ships are considerable. These expeditions on lesser-charted waters last anywhere between 21 and 29 days, with prices hovering around AUD 25,000 for a mid-range ship.

Fly+Cruise options tend to be slightly more expensive than classic cruises from Ushuaia, since the flight to the South Shetland Islands is relatively expensive. However, we occasionally feature some great deals on this option too, so keep your eyes peeled on our special deals page for upcoming early-bird sales.

See our detailed guide on the costs of visiting Antarctica from Australia to discover more cost-cutting tips. 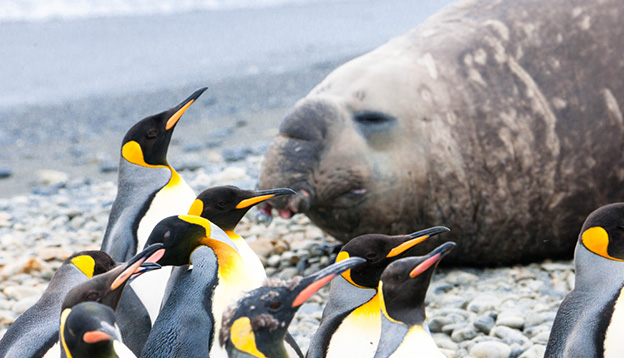 Penguins and elephant seals lounging together in Antarctica. Photo: Shutterstock

Weather in Antarctica – When is the best time to travel to Antarctica?

The cruising season officially opens in late October and lasts until the end of March. This is the Austral summer season and the only period where the frozen continent is accessible by both cruise ship and plane. Each month of cruising season offers distinct highlights, be it pristine landing sites and overwhelming icebergs at the start of the season, an abundance of penguin, seals and birds in mid-season and impressive whale-spotting in February and March.

There are some (mild) temperature differences between early, mid and late-season travel to Antarctica although we’d urge you not to let temperatures dictate when you visit. Moreover, do keep in mind that Antarctica isn’t as cold as you may imagine (or fear) during cruising season and ‘monthly averages’ shouldn’t be your main deciding factor when picking the best time to visit. Instead, learn all about the unique wildlife events and overall scenery changes in our Month-by-Month Guide to Antarctica and you may find your ‘ideal’ time may well be different to what you’re expecting. Head to our blog, Weather in Antarctica for more details on this unique destination. 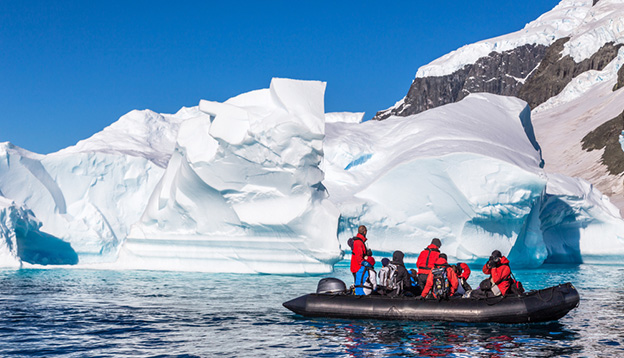 What are the best cruises & ships travelling to Antarctica?

Now here is a question we field regularly: what is the best Antarctica cruise ship for me? Given it’s near-impossible to answer this without knowing your personal desires, we’ve compiled an excellent guide to the Top 10 Best Cruises to Antarctica and chose each option based on a very particular criteria, be it the most affordable, wildest, shortest, longest and the one that just about guarantees the greatest chances for magnificent wildlife-spotting. Just a hint: that would be the one that visits South Georgia!

When it comes to expedition ships particularly, the ‘best’ becomes even more relative! Our wide range of Antarctica ships features luxurious gems boasting jacuzzis, gourmet dining, fancy gyms, solariums and stunning suites (like the Crystal Endeavour) as well as true-blue adventurous vessel (usually former research ships like the Akademik Shokalskiy) that make-up in substance and ‘expedition feel’ what they lack in bling. Whether you’re after a truly decadent experience or simply want to get to Antarctica the most affordable way possible, matters little: our main priority is that each and every ship be the most reliable, safe and reputable vessels on the water today. We compare small, medium and large ships here to help you decide which one is just right for you. 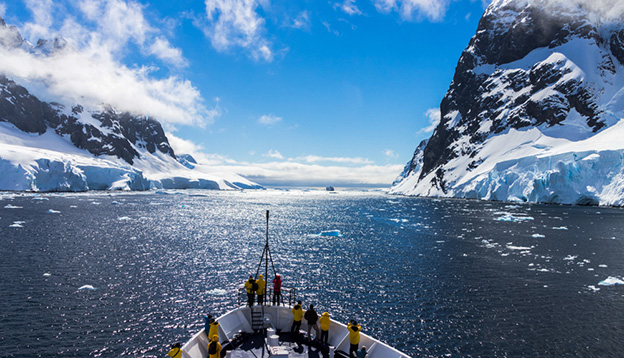 The icebergs and mountains in Antarctica. Photo: Shutterstock

Important things to consider when travelling to Antarctica

There’s a ton of nitty-gritty stuff you ought to know when planning an expedition to Antarctica. Yes, we know, it’s not romantic to talk about insurance and packing lists and blah blah but each and every subject here is very important so make a mental note to cross all your Ts.

How much time do you need to visit Antarctica – Our ballpark estimate is about three weeks if departing from Australia, although there’s a lot to consider in this regard, such as if you’re planning to explore Patagonia if cruising from Ushuaia.

Expedition Insurance – The least-glamorous yet perhaps most important aspect of Antarctica cruising, expedition insurance isn’t just important, it is imperative. You simply won’t get on a reputable ship without it, nor should you want to! You are, after all, planning to the travel to the ends of the world and heaven-forbid anything was to happen.

What to pack – Almost as exciting as insurance, packing for a trip to Antarctica is one of those things many wish they could pay to have done. BUT, it’s not as painful (nor complicated) as you may think. Pack smart, not big!

Crossing the Drake Passage The spectacular Drake cops a lot of flack for being ‘unpredictably scary’ and although we all think it’s one of the most exciting aspects of cruises from Ushuaia, we understand if you’re hesitant about tackling the beast by ship. Do read our guide linked above, it may just help you appreciate the importance of the passage and the sheer thrilling experience it can gift. And then hope for the Drake Lake!

Cruising solo – Don’t have anyone with whom to travel to Antarctica? No worries! Solo cruising is much more common than you may imagine and ships are catering for this ever-growing tourist market. 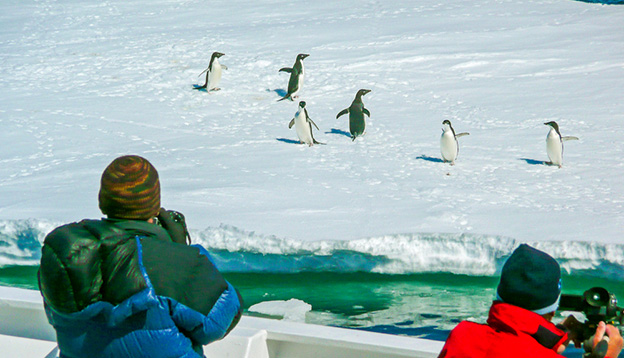 Passengers photograph Adelie penguins, as the ship glides by the broken pack-ice that they’re resting on. Photo: Shutterstock

Antarctica expeditions are sensory spectacles that go beyond the seemingly obvious. For most prospective visitors, the spectacular array of unique Antarctic wildlife is arguably the primary reason for visiting yet, at the end of their journey, they’re likely to shoot off a near-endless list of experiences that are imprinted in their hearts. The landscapes are ethereal and like nothing you could ever see, anywhere on earth. Icebergs are spellbinding, horizons stupefying and range of colours surprisingly varied. The remoteness and peacefulness of Antarctica are two aspects that make voyages to the south unforgettable, although the fracas of the wildlife – seals and penguins particularly can be utterly deafening. This is one of the most beautiful surprises of all.

Then there’s the camaraderie felt and new friendships formed aboard expedition ships, something that only occurs on voyages that are deeply intense and personal. Being with a small group of like-minded adventurers in such an otherworldly place is unique and tends to fortify connections. Which, incidentally, is the reason why cruising Antarctica solo has become so popular. People are finally understanding that cruising to the White Continent is unlike cruising anywhere else. This isn’t a romantic splurge-cruise in the tropics: it’s for people who want to explore, discover and learn. Our special guest Clint Bizzell of Places We Go was forced to cram his highlights into a top-5-list and if you read his guest-blog you’ll understand why he had such a hard time with the task.

Top Activities in Antarctica – Antarctica isn’t just a visual spectacle but an immersive and interactive destination that’s tailor-made for active explorers. From wildlife-spotting to kayaking, snow-shoeing, snow-camping, hiking, polar plunging, Zodiac cruising and visiting research stations, there’s a surprisingly long list of things to do and see in Antarctica.

Best Antarctic Destinations – When we talk about Antarctica, we are not talking about one specific destination only but several, combined. On classic cruises from Ushuaia, expeditions include stops on the South Shetland Islands which are your first port of call. These wildlife-enriched isles host most of the research stations and float just north of the Antarctic Peninsula, the main destination on the western side of the continent. Longer cruises can also include visits to the Falklands and South Georgia, the latter home to the largest King Penguin colony of all. This incredible ‘wildlife crèche’ is a nature-lover’s dream and rightly the most coveted sub-Antarctic island destinations of all. On cruises from Australia/New Zealand, you’ll be crossing the Ross Sea, the reputed ‘most marine-life enriched’ sea on earth and will have a chance to see the Ross Ice Shelf, the most isolated research bases of all, several remote sub-Antarctic islands and historic huts dating back to the Heroic Age of Antarctic Exploration.

Want to know even more? See our range of fantastic Antarctica Cruises and contact us for more personalised advice.

From your initial enquiry until your trip ends, you will be assigned a personal Destination Specialist who will offer a full service for your travel needs