Giant ice sheets, crisp white horizons, breathtaking icebergs (and temperatures) and the kind of majestic wildlife that makes you say WOW at every turn: Welcome to Antarctica!

The big White Continent in the south is undoubtedly one of the most coveted travel destinations on earth and, given the precarious nature of its very existence, one which regularly hits the news. From the swift melting of its ice to the rising of its temperatures and even the size of its annual migratory colonies of penguins, seals and whales, there are a lot of Antarctica facts that are now common knowledge. Or so one would hope!

Here, we share 14 amazing Antarctica facts that you might not know, facts that’ll blow your mind and make you wanna pack your bags (and those extra woolly socks) and jump aboard the nearest expedition vessel heading to the southern ends of our world.

Antarctica: the continent, the legend, the unforgettable destination.

1. Antarctica is almost twice the size of Australia

Now that’s big! Covering an astonishing 14 million square kilometres, Antarctica is the 5th largest continent on earth although, if all its ice were to melt, it would be the smallest. Crazier still, Antarctica just about doubles in size every winter due to ice collection, expanding at a mind-boggling rate of 100,000 square kilometres, every single day. Aside from the rather obvious issue of having no daylight in which to see, well, anything really, winter cruising in Antarctica is not feasible because the ice would prevent you from ever reaching land.

Best to head here in summer then… 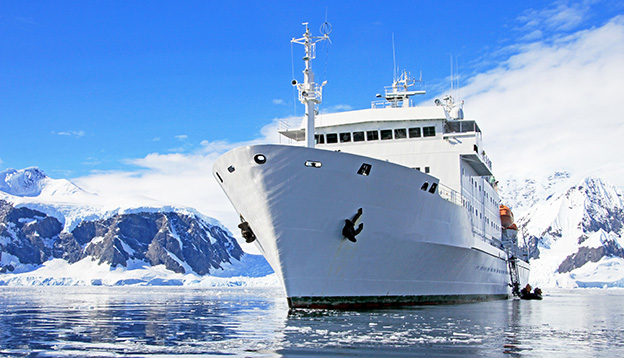 2. Antarctica is the largest desert in the world 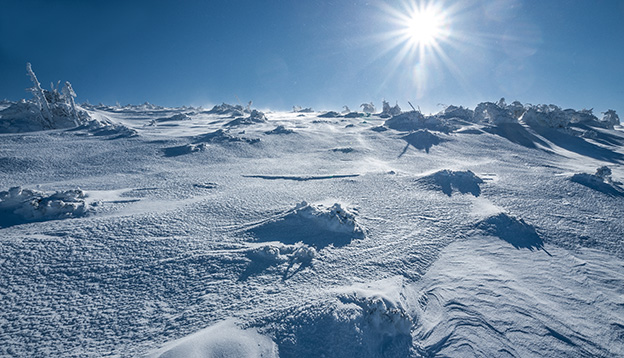 Despite its abundant ice, Antarctica is classed as a desert as it hardly ever sees rain. The inner regions of the continent receive an average of only 2 inches of rain a year, meaning even the Sahara desert gets more rain.

3. Antarctica is the only continent without any reptiles

Antarctica may well host a jaw-dropping array of spectacular wildlife in summer yet very few creatures are hardy enough to actually live here, year-round. Cold-blooded reptiles are nowhere to be found, and neither are any furry terrestrial mammals. The freezing temperatures and eyeball-freezing winds mean that wildlife here has had to evolve some pretty cool tactics in order to survive. It’s Why Wimps Need Not Apply.

Being fat and blubbery might not bode well in other parts of the world but, in Antarctica, it makes you king of the ice!

Meet the outrageously handsome Elephant Seal – and here are 10 crazy facts about these guys you seriously need to know. 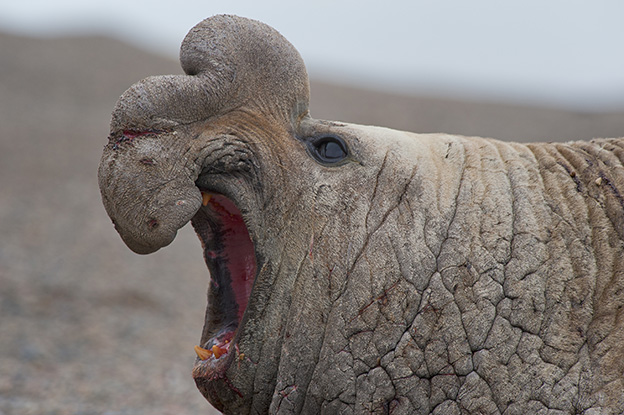 5. There are no polar bears in Antarctica

No, seriously, we get asked this question quite a lot, and the confusion is totally understandable. All that ice and all that snow and all those yummy seals, right? Wrong! Wrong polar end, we’re afraid – it’s the other one. Interestingly, however, we tried to discover if polar bears could exist in Antarctica and the answer, written on this blog, might surprise you. Did you know, for example, that the primary reason you can have up-close encounters with penguins is because they have never been hunted by polar bears? True story! Go read that blog; it’s fascinating stuff. 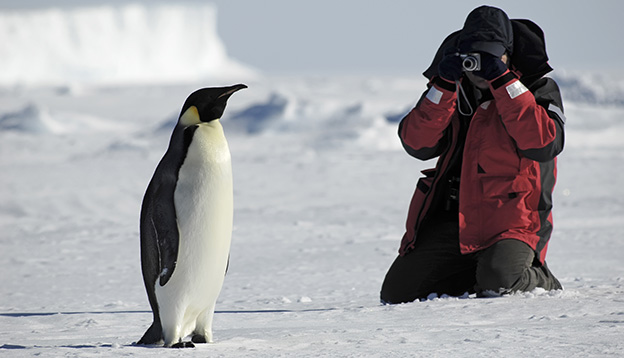 A friendly encounter with a King Penguin. Photo: Shutterstock

6. Sledge dogs have been banned from Antarctica since 1994

Alongside polar bears, one might rightly deduce that sledge-dogs would be handy companions on an Antarctic expedition and indeed they were, back in 1911, when Roald Amundsen reached the South Pole. Shackleton and Robert F Scott also tried to use sledge-dogs during the age of polar exploration but given they seemingly didn’t know much about huskies, failed miserably – but that’s another story. Sledge-dogs were living quite happily in Antarctica with their humans, but the fear they would break free or otherwise threaten the health of Antarctic wildlife caused their expulsion in April 1994 and finally led to a complete ban of all non-native species. Except for humans, that is. The strict regimen you’ll have to go through to make on-land visits by Zodiac, on an Antarctic expedition, is all aimed at reducing the introduction of any species (including bacteria) into the pristine, isolated continent.

7. Antarctica is the only continent without a time zone 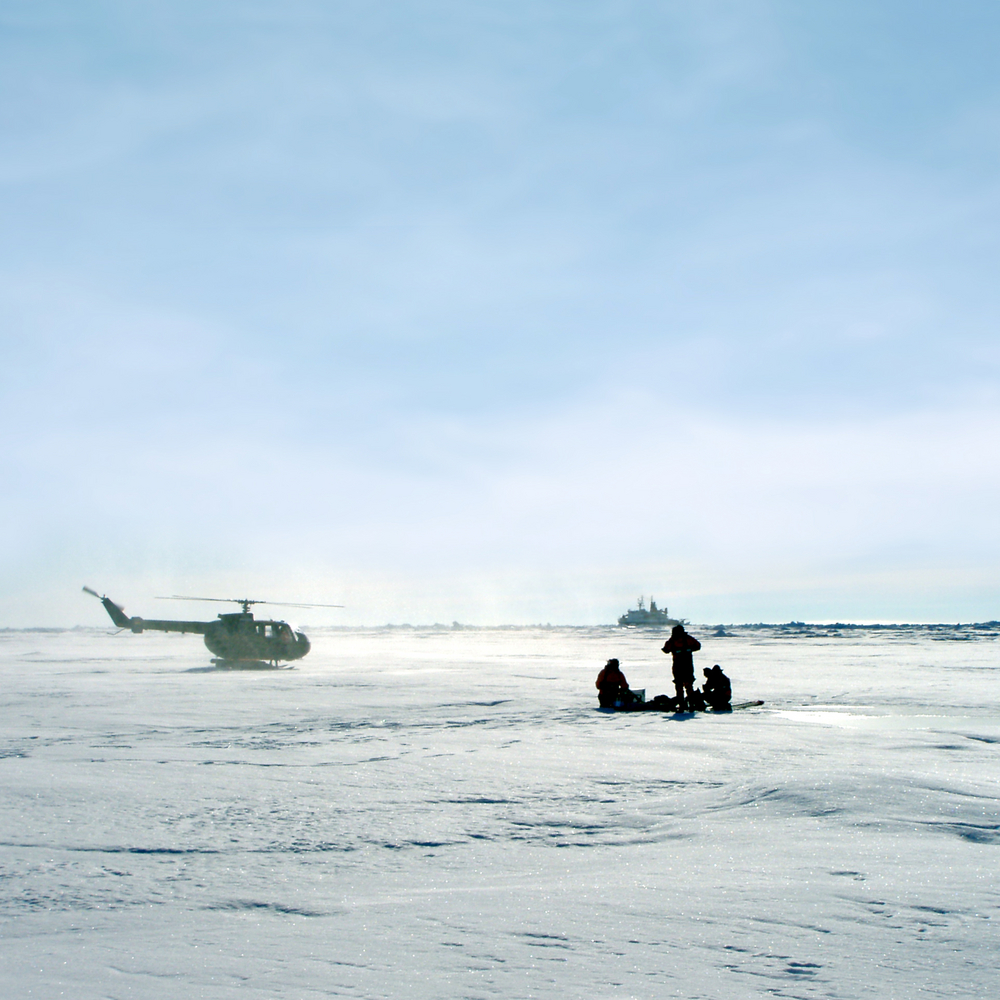 In the summer, Antarctica experiences 24 hours of sunlight, and in winter 24 hours of darkness, making it completely pointless for this continent to operate under a specific time zone. When scientists work in Antarctica, they simply choose which time zone they wish to operate in, which is usually their home DST, totally eliminating jet lag.

8. You can’t work in Antarctica unless you’ve had your wisdom teeth and appendix removed

Every research base in Antarctica boasts a medical facility, but there are a few ‘predictable’ situations they simply can’t cater to. Having your wisdom teeth or appendix taken out are two such instances so, if heading to Antarctica for work, you’ll be kindly requested to leave both behind. 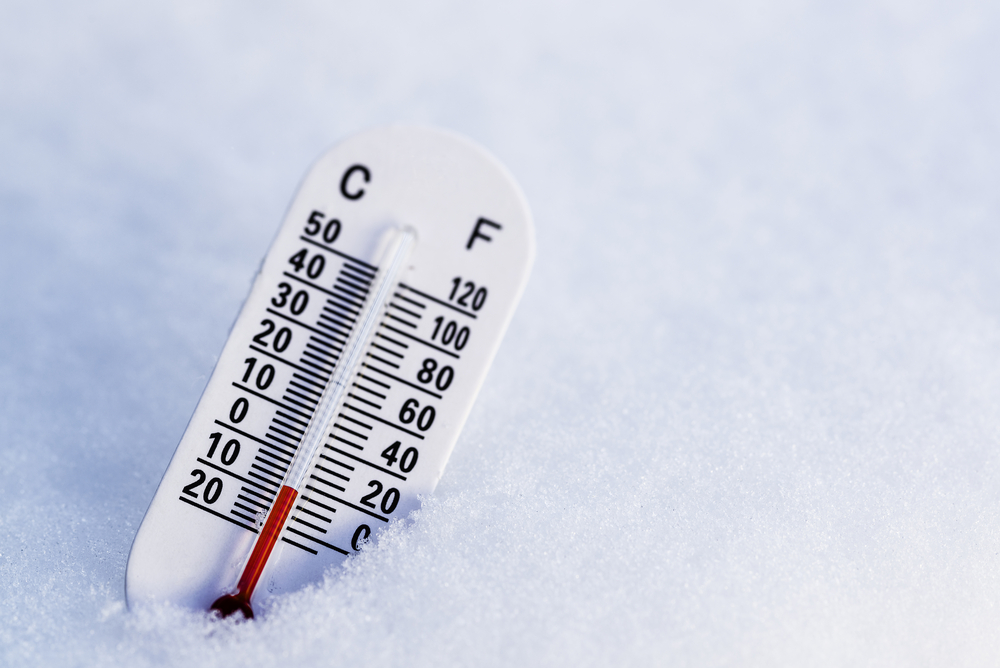 There is a specific ridge in Antarctica that boasts the coldest recorded of all, a positively brain-freezing delight of -89.2°C (-133°F). The highest temperature, on the other hand, has been recorded at 14.5°C (58.2°F), rather balmy for this part of the world.

10. A group of seals is called a Harem 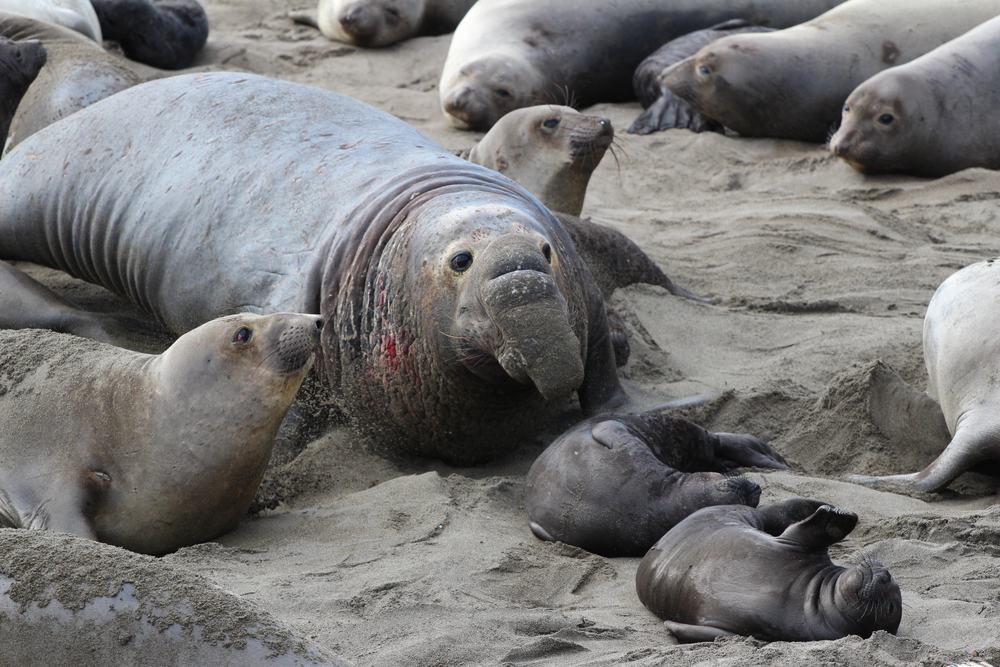 Seven distinct seal species inhabit the waters lapping Antarctica and they, along with penguins, are the most sensational wildlife to spot on expedition cruises. They live in large harems over the summer, and each species is fascinating and photographic in its own right. The Weddell Seal is probably the cutest of all (don’t tell the other we said that) although they’re all amazing creatures and spending hours waddling alongside or diving with them is out of this world. Oh…did you not know you can dive with seals in Antarctica? You can! Here are some cool Antarctica activities to know about.

11. Antarctica has a waterfall of blood 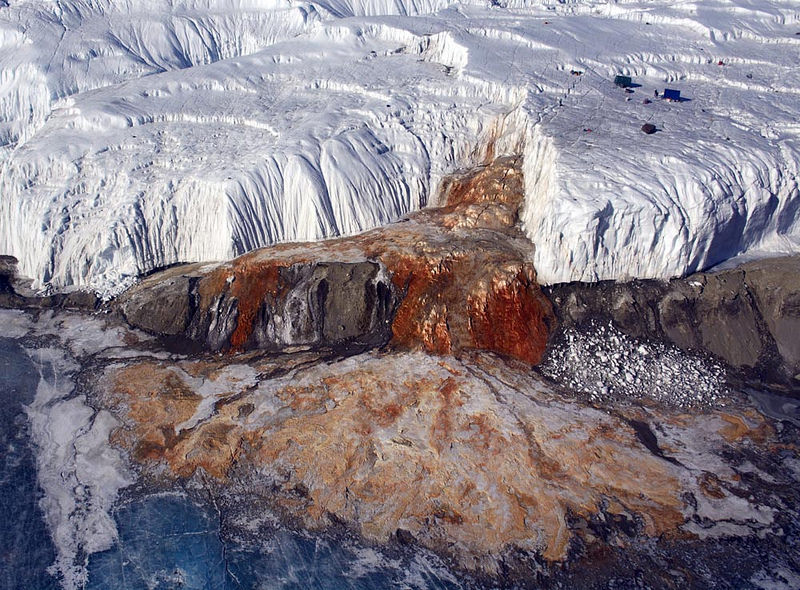 A rust coloured glacier in Antarctica.

… Well, almost. This unbelievable waterfall stands 5 stories high and runs off the side of the Taylor Glacier straight into Lake Bonney. It’s actually the high iron content of the water that makes this sub-glacial waterfall run blood-red. That, combined with extremely high salt content and zero oxygen content, make this waterfall a truly magnificent, natural phenomenon.

12. 70% of the world’s fresh water is found in Antarctica 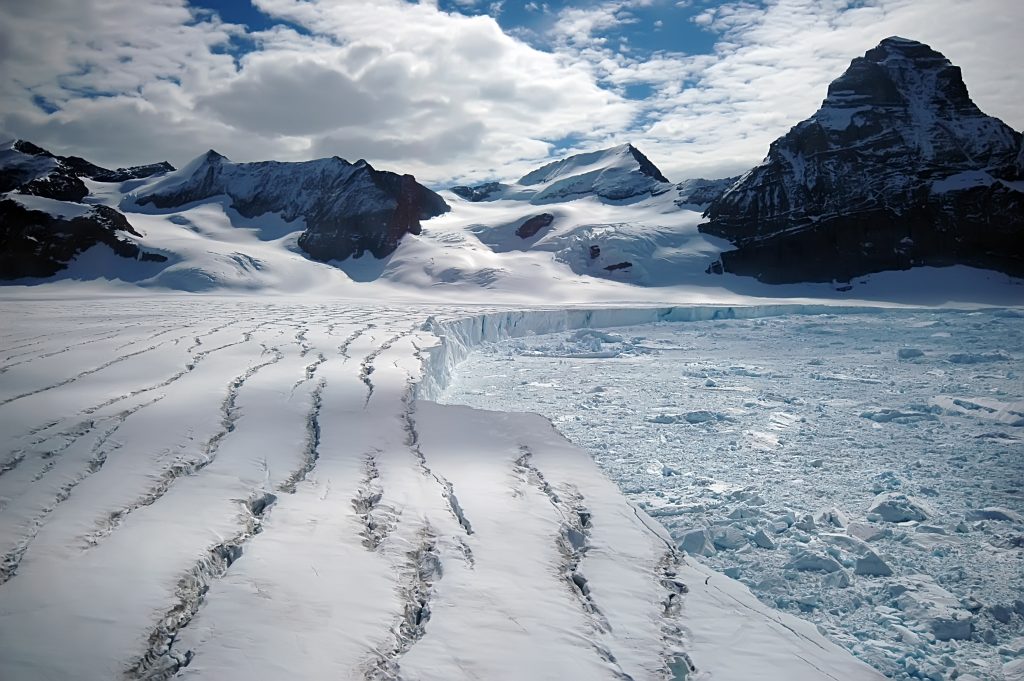 Even though some parts of the continent haven’t received any rainfall or snow in the last 2 million years, Antarctica contains the majority of the worlds fresh water supply, and 90% of the world’s ice. Underneath the enormous ice cover, scientists have also discovered over 400 separate lakes.

13. The largest Iceberg in Antarctica is bigger than Jamaica Iceberg B-15 was the largest iceberg ever recorded and measured an incredible 11,000sq.km. This amazing chunk of ice broke off from the Ross Ice Shelf in March of 2000 and, as recently as 2018, a huge chunk of that was reportedly spotted floating between the Falklands and South Georgia. Casting your eyes on the Ross Ice Shelf (the largest ever discovered) is among the most rewarding highlights of Antarctic expeditions departing Australia/New Zealand whilst visits to the Falklands and South Georgia are included in a few select expeditions every year, departing from Ushuaia, South America.

14. On Antarctic Expeditions, it won’t actually be as cold as you might imagine 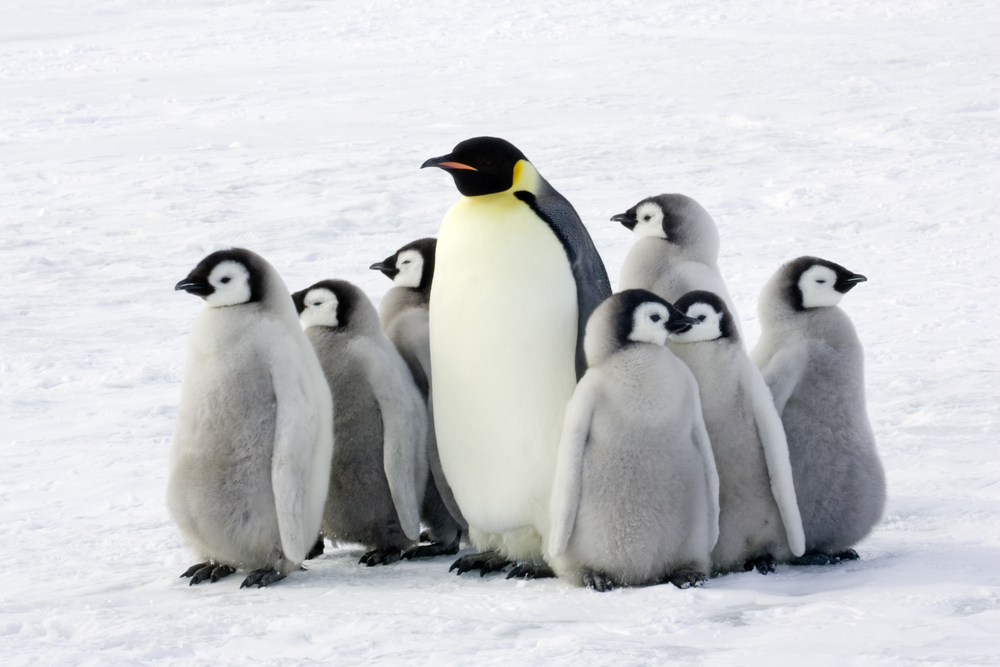 An Emperor Penguin with its chicks. Photo: Shutterstock.

When talking about the brutal temperatures and climatic conditions of Antarctica, all the stats relate to the interior of the continent: this is where Antarctica is at its coldest, windiest and harshest. The coastal regions, however – the ones one visits on expedition cruises – are much calmer and warmer, especially on cruises visiting the Antarctic islands of the South Shetlands and the Peninsula proper. In summer, temps can nudge above freezing, seas can be calm, and the spectacular sunshine can make life more than just bearable but very enjoyable. This is why our Packing Guide to Antarctica isn’t as extreme as you might imagine and why we recommend you not get too hung up on the temperatures. Pack right and your own Antarctic expedition won’t be nearly as hard-core as you may fear.

Love learning new facts about the destinations you travel to? Well, let us tell you, you’ll love an Antarctic expedition. Staffed by a crew of exceptional Antarctic experts, expeditions to the furthest ends of our planet include a myriad of fascinating lectures and presentations, all aimed at educating guests on all things Antarctica-related. See our vast collection of Antarctic Expeditions and come experience this incredible land of magnificent nature.

Contact us or visit our Antarctica Travel Guide to find out more.