Antarctica is the fifth largest continent, yet it has the least number of resident animal species. And the few species that do come ashore are present for less than half of the year – prevented from access by the harsh weather and the barrier of sea ice. Yet around Antarctica is the vast Southern Ocean which teems with wildlife. Almost every animal that exists in or visits Antarctica is therefore dependent on the sea: Antarctic Wildlife are essentially marine species. 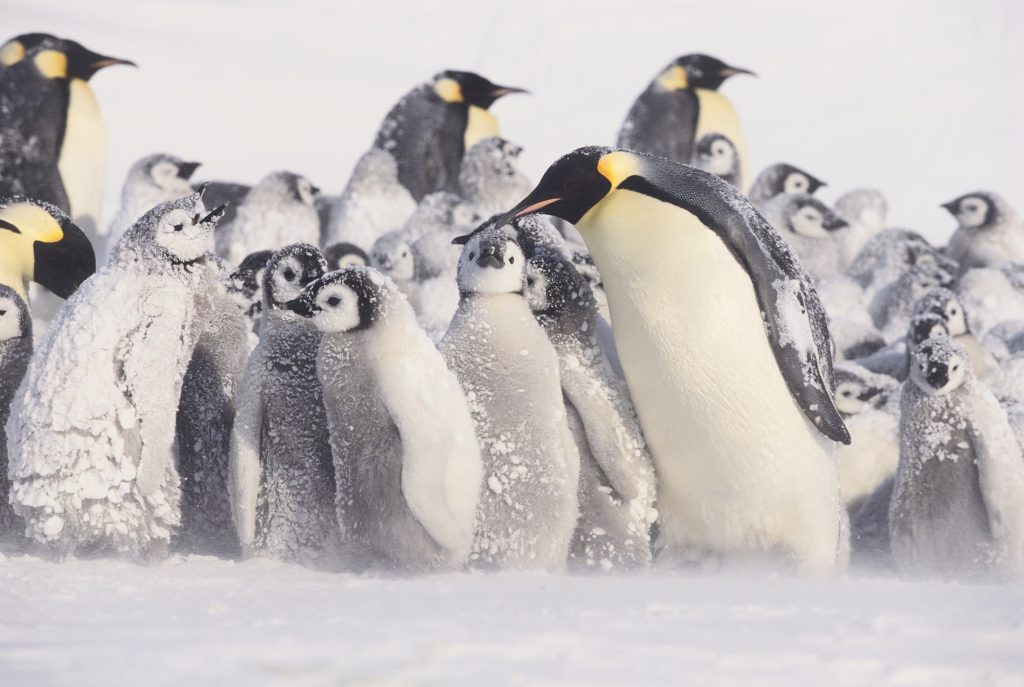 In the Southern Ocean, the Antarctic Wildlife includes marine mammals and seabirds. They are there because the Southern Ocean supports huge quantities of planktonic organisms, small plants (phytoplankton) and the animals (zooplankton) that feed on them. The plankton in turn directly or through another creature provide food for the larger animals higher up the food chain. Thus Antarctic wildlife ranges from tiny marine organisms to the great whales. And above these whales glide the great migratory seabirds. Read on and learn all about the plethora of Antarctic Wildlife. 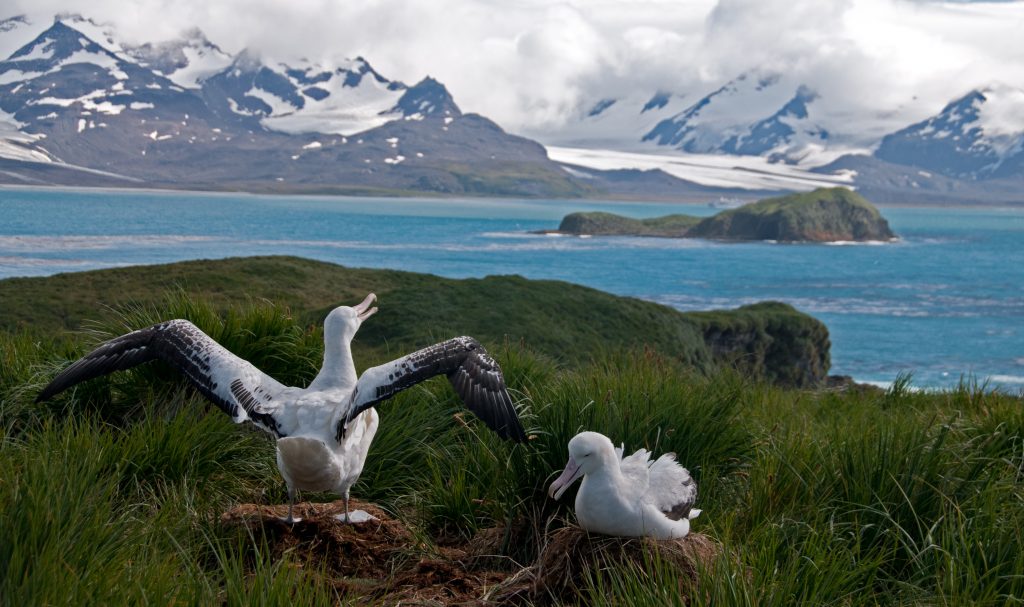 Iconic seabirds such as albatrosses and fulmars spend nearly all of their lives at sea, settling briefly on the sub-Antarctic islands only to reproduce. The Southern Ocean is so large that it can support a huge number of seabirds, although the few breeding sites become very crowded. Possibly the most majestic of the sea birds are the large albatrosses – such as the Wandering albatross that covers great distances in what looks like effortless flight with long sweeping glides on fully outstretched wings. It has a wingspan up to 3.5 metres. Wanderers roam across the Southern Ocean, sometimes as far south as the edge of the pack ice but mostly around the food-rich Antarctic Convergence. They are often seen following in the wake of ships., but can be killed if they catch the bait of Antarctic fishing vessels.
Other common seabirds include the smaller species of albatross, fulmars, petrels, skuas and prions. Despite the wild seas of the Southern Ocean some surprisingly small birds are also encountered, such as the tiny Wilson’s Storm Petrel which flutters about the surface as it feeds. On land in Antarctica can be found the beautiful white Snow Petrels which come ashore to nest in rock crevices. 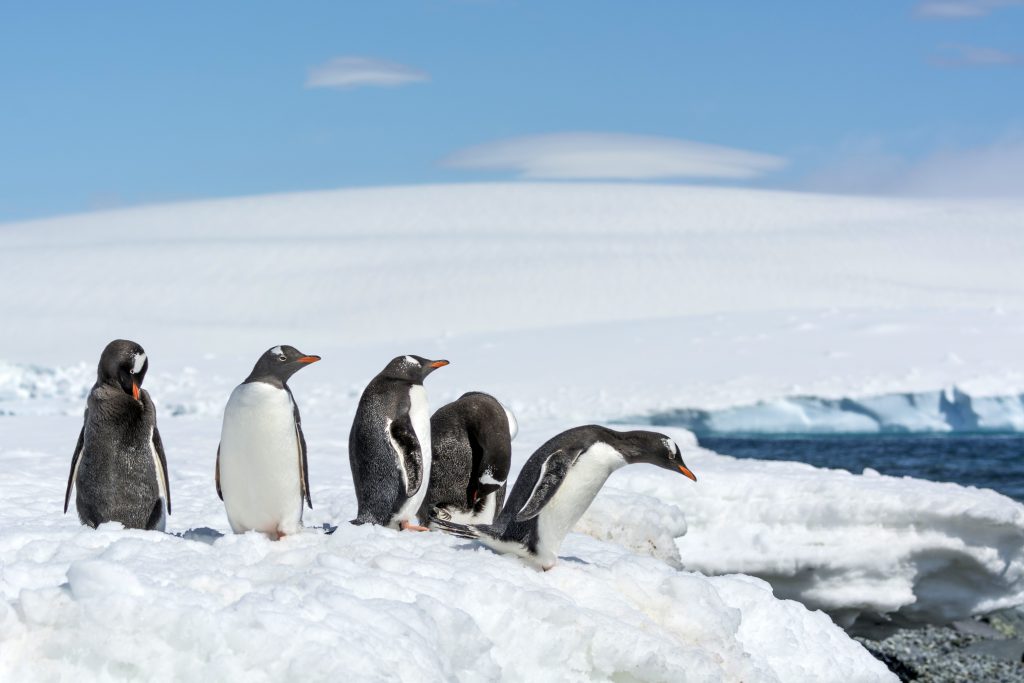 Think Antarctica, think penguins. Penguins are arguably the most well known Antarctic Wildlife. They look very cute and, occasionally, fluffy but they are surprisingly tough. They are birds, but they can’t fly. Their “wings” are essentially small flippers that can propel them very efficiently over great distances under water: watch a movie of penguins under water and it looks remarkably like flight. But not so on land where short legs lead to awkward waddles, especially when the surface is steep or rough. But in soft snow or slippery ice they can “toboggan” on their tummies, pushing with their flippers and feet. They come ashore only to nest – all their food is in the sea, and they will travel great distances over the ice to get to the sea, then great distances in the water looking for krill, squid and fish.

Nearly all penguins leave the Antarctic continent in winter. But one remarkable species comes ashore to breed. Emperor penguins, the world’s largest (over 1 metre tall), breed in colonies mainly on secure sea ice. The males and females alternate in carrying the egg on the feet. During the fierce blizzards in the depth of winter the birds huddle together to keep warm and protect the eggs. The chicks appear in July and August, when Antarctica is at its coldest and, as the chicks become too large to sit on the adults’ feet, they huddle in crèches. After fledging in autumn the young birds disperse to sea to fend for themselves. 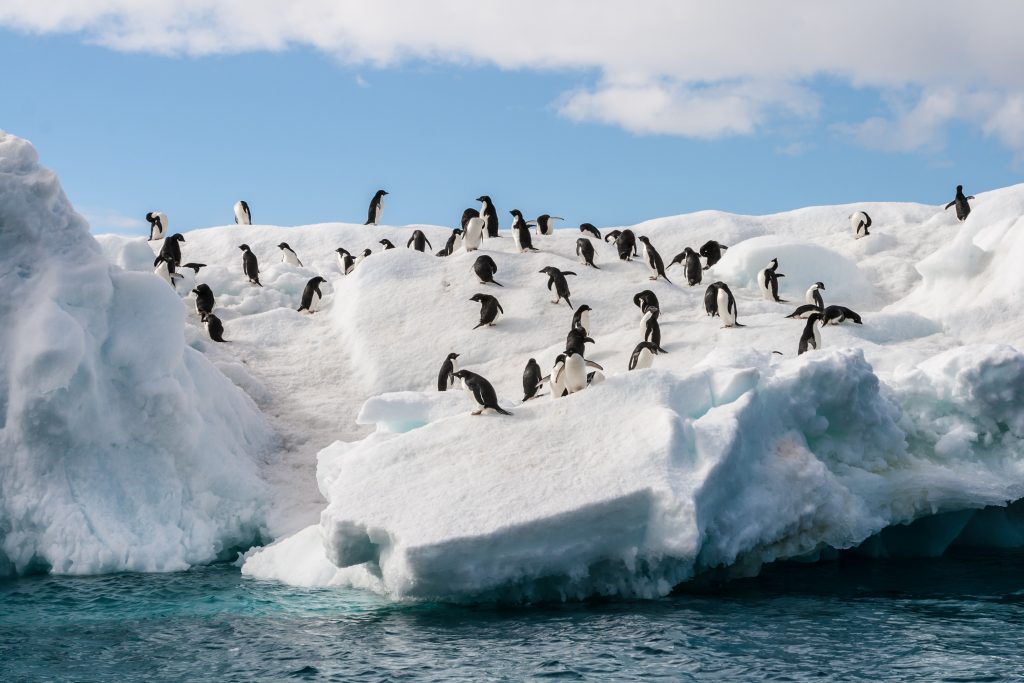 Adélie penguins are present in large numbers around the continent in summer. When they come ashore in October they have to waddle and toboggan 100 kilometres or more between the ice-edge and their colonies, and later return in the hunt for food for their chicks waiting at the nests. But nothing is easy: the “nests” are just small mounds of stones in the few coastal rock exposures.

Other penguins nest on exposed rocks and beaches on the Antarctic Peninsula where the conditions are less extreme, or among the tussocks on the sub-Antarctic islands. Here are found the larger species, living alongside some of the smallest, such as the Rockhopper penguins with their unruly feather crests. King penguins congregate in large colonies, exceeding 100,000 breeding pairs at some locations on South Georgia with even larger colonies on islands in the Southern Indian Ocean. One colony of Royal penguins on Macquarie Island holds over 500,000 breeding pairs. 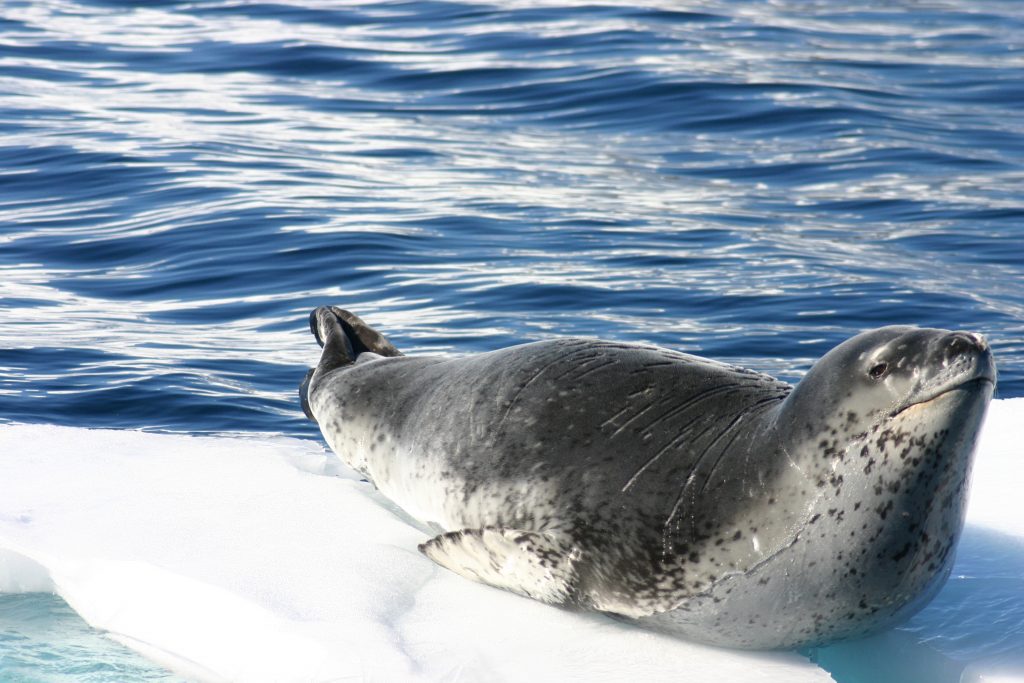 Yes, everybody loves penguins – and so do Leopard Seals. While not the largest  seal in the Antarctic Wildlife, it is the fiercest and fastest. Unlike other seals, it feeds on penguins. It will lurk around the ice edge ready to sink its teeth into an unsuspecting penguin.
By far the largest seal is the Elephant Seal. Adult males can exceed 5 metres in length, and over 4000 kilograms. Females don’t reach such great size, but even new-born pups can exceed 1.2 metres and over 40 kilograms. Luckily for human visitors these animals are largely placid and inactive on land. But in the sea they are speedy swimmers as they chase squid and fish. Once hunted for their oily blubber, the numbers are now more stable. Mostly found on the sub-Antarctic islands, a few vagrants will make it further south to beaches where they come ashore to moult. 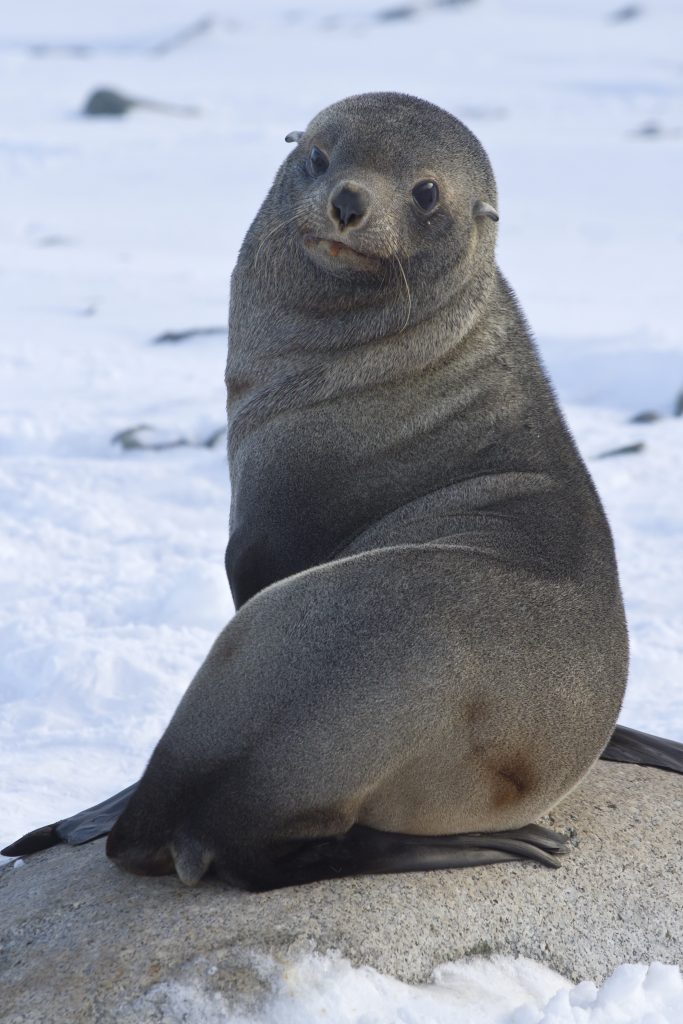 Other species include the Crabeater seal (the most abundant in the world) and the Weddell Seal, mainly visible on the pack ice around the continent. Very rare, however, is the Ross Seal, which is specially protected.
The sub-Antarctic islands also feature Antarctic fur seals and Sub-Antarctic fur seals. These seals have pelts that were one attractive to hunters who almost drove the species to extinction. Almost 200,000 animals were taken over just 10 years at two islands. With the cessation of commercial sealing, populations have now recovered. 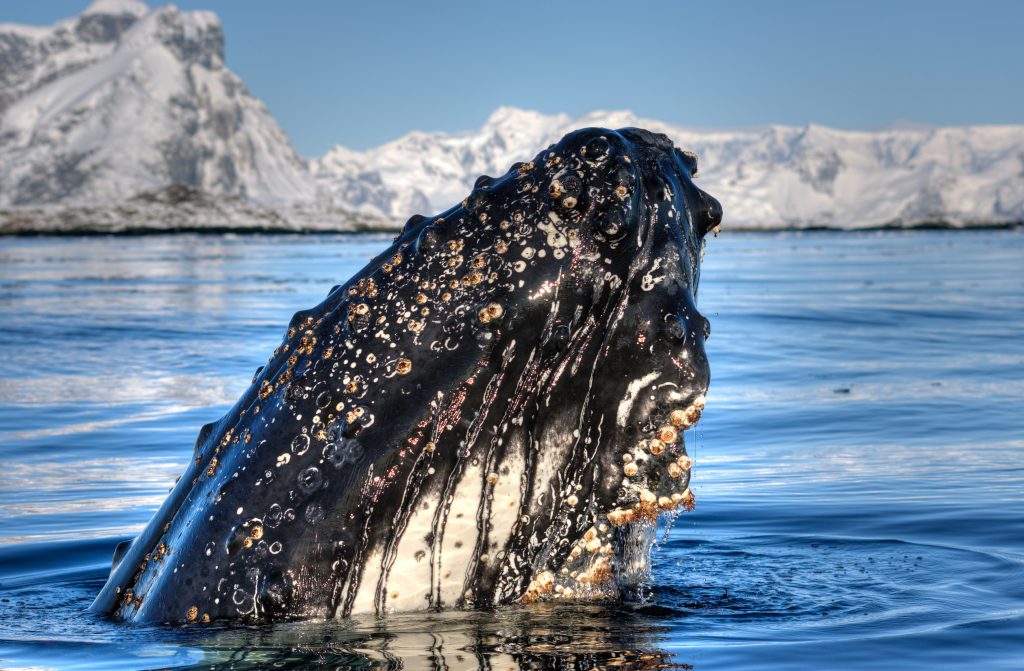 The biggest of Antarctic Wildlide: The Whale. Photo credit: Shutterstock.

The largest known animals in the world are part of the Antarctic Wildlife and they spend at least half their lives in Antarctica. Blue whales are the giants of the sea, and the giants of the universe. A blue whale can be up to 30 metres long (well over the length of B-Double trucks you’ll see on the road) and over 180 tonnes (some four times the weight of that loaded truck). While rare, they are sometimes seen feeding near the ice edge.
Not as large, but in greater numbers, are others of the so-called great whales. Many of these were the victims of past whale hunting (and a few still are) but in in most cases their numbers are rebuilding from the almost catastrophically low 1% of their original populations. Fin whales are about 6 metres long at birth and grow to over 25 metres. Sei whales look similar but are shorter and Southern Right whales grow to about 17 metres. Sperm whales are easily identified by the distinctive barrel-shaped head. Humpback whales are a very well known because they are relatively abundant and because they are often seen close to shore in tropical and temperate waters when they migrate from the Antarctic to mate and give birth. Most abundant of the great whales are the Minke whales which are also in the news as the target of commercial whaling. 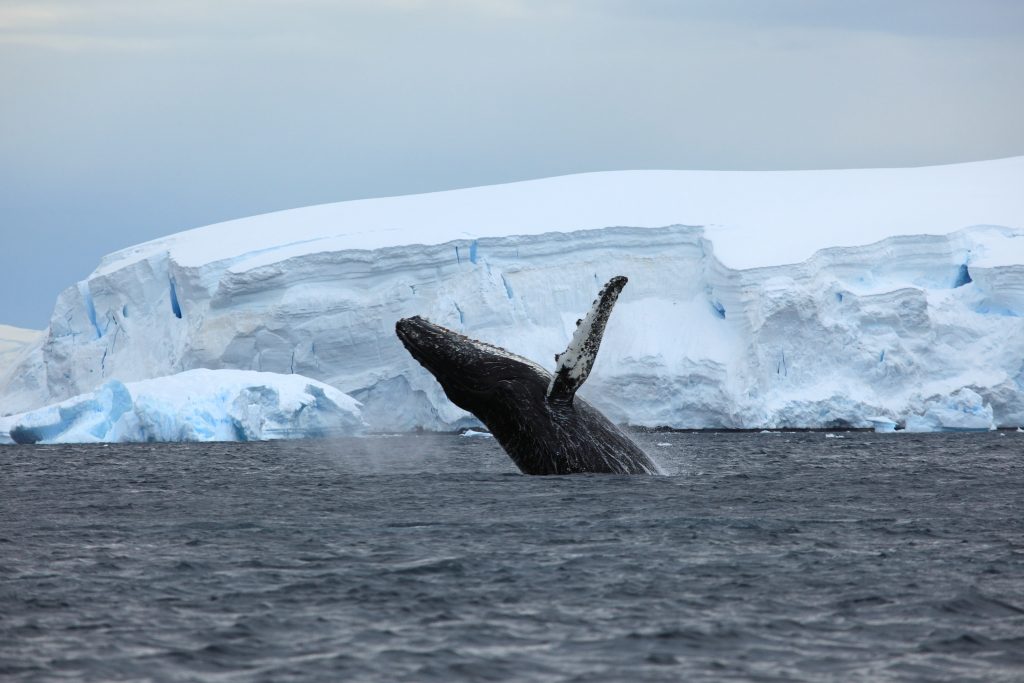 There are many species of smaller whales, including the orca or Killer whale which is known for its tall fin and the striking contrast of its black and white markings. It is the only cetacean that regularly feeds on other warm-blooded animals. It is really the largest of the dolphins, of which there are many species in southern waters along with beaked whales.

From the largest to the smallest – plankton, including krill

All of these large animals, whales, seals, penguins and other seabirds, find their food in the Southern Ocean. At the bottom of the food change are the microscopically small single-celled organisms that drift with the ocean currents. Plankton are produced in huge numbers, and thus provide food for the higher levels. A key organism is krill. Krill are also planktonic, and they feed on the phytoplankton. Krill is a target species for many species of higher animals, including the great whales that scoop up huge quantities of this protein rich food source. Humans are also now fishing for krill and for some species of Antarctic fish.

Surely there is something living only on land! 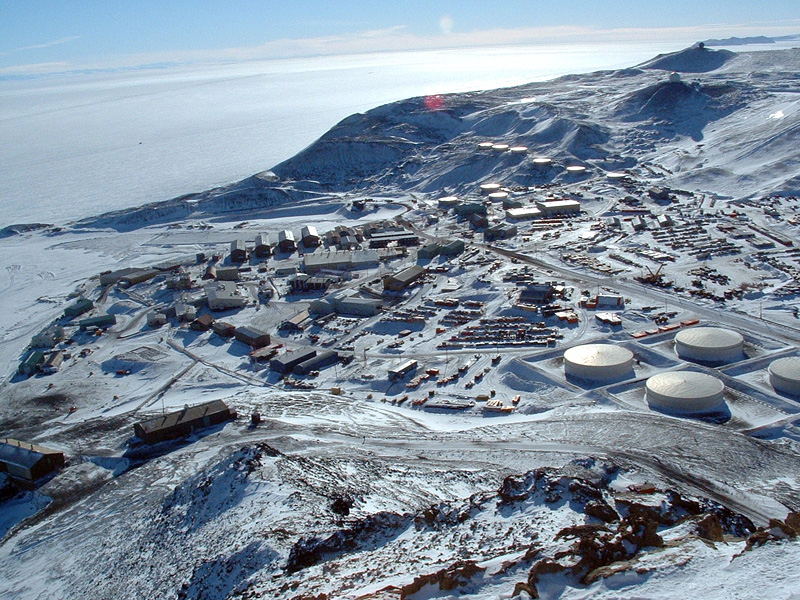 Humans have occupied Antarctica parts of Antarctica for over a century – but in small numbers. In winter, the human population is perhaps 5000 people. Humans are temporary visitors as it is not a natural environment for us. But there is some of the Antarctic Wildlife that call Antarctica home and never leave. These are wingless midges (insects) that inhabit the rocks and beaches of the Antarctic Peninsula – dormant over winter and active only for the brief summer window. They are up to 5mm long and can survive being frozen for as much as two years. They may not be particularly photogenic, but they are the true Antarctic citizens. All the other creatures spent most of their lives in the Southern Ocean, or have to come across it to reach Antarctica.

An Antarctica cruise takes you to one of the last untouched destinations. This truly unique continent offers the adventures of a lifetime for people of all ages. You have the opportunity to encounter extraordinary wildlife! Visit the mesmerizing continent now. Click here for more information about Chimu.

For more details on the Antarctic Wildlife, see the tables below:

Antarctica Encompassed is the ultimate wildlife and wilderness adventure.