The Weather in Antarctica is nearly always very cold. That’s obvious when we see its place on the globe: the South and North Poles never get much heat energy from the sun so we expect both to be cold, harsh and inhospitable places. It’s really a wonder there’s any wildlife here at all. Out of the two, however, Antarctica is a much colder Polar region given it’s a high landmass surrounded by the cold Southern Ocean and is almost entirely covered in ice, many kilometres deep.

Having said that, Antarctic expeditions visiting during the summer months take their guests to the warmest region of the continent, namely the islands of the South Shetlands and the coast of the Antarctic Peninsula, which juts out of the north-west corner. Oh, it’ll be plenty cold, don’t worry, but unless there’s a particularly severe storm (which is rather rare in summer) the temps will hover around 0C, which is actually milder than winter temps in many parts of Australia and certainly Europe and North America. 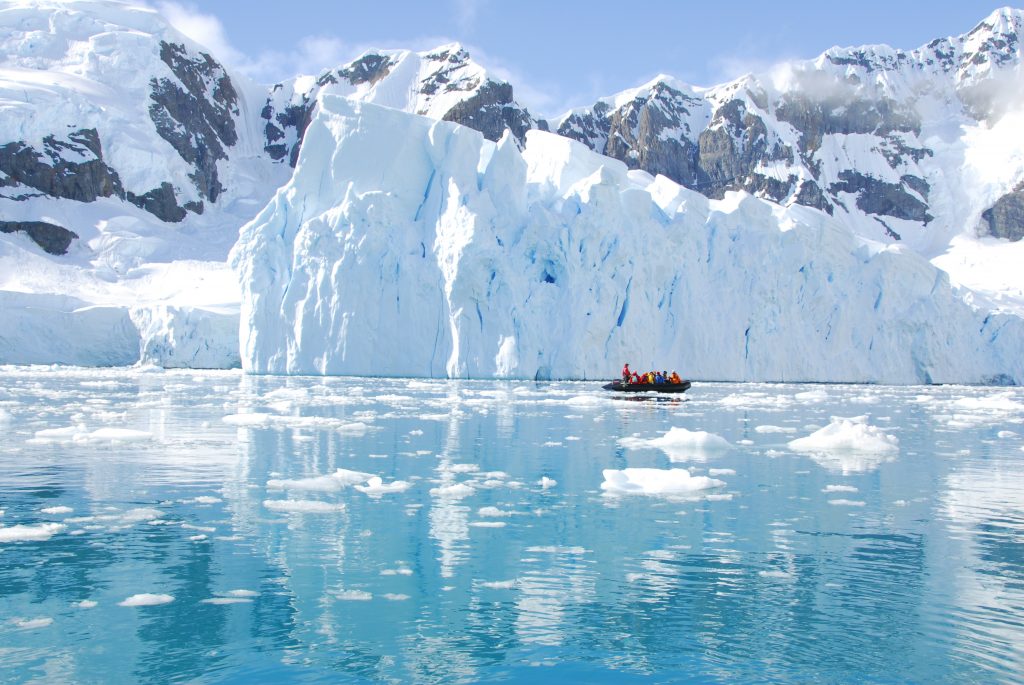 Cruising with a zodiac around an iceberg in Antarctica. Photo credit: Shutterstock.

At the South Pole, winter temperatures are routinely around minus-50°C and often get below minus-70°C. But some parts of Antarctica are even colder, if you can imagine that. Russia’s Vostok station, nearly 700 metres higher in altitude than the South Pole, has the official world record low surface temperature, a super balmy minus-89.2°C, recorded in 1983. Satellites have recorded an even lower surface temperature near Dome Argus, the 4000-metre high point of the ice sheet, but that has not been verified by ground measurements.

So, virtually any Antarctic weather forecast will be “cold today, cold tomorrow, cold for the rest of the week” but that’s just the beginning of the story.

Read on and learn what determines the sensationally harsh weather in Antarctica. 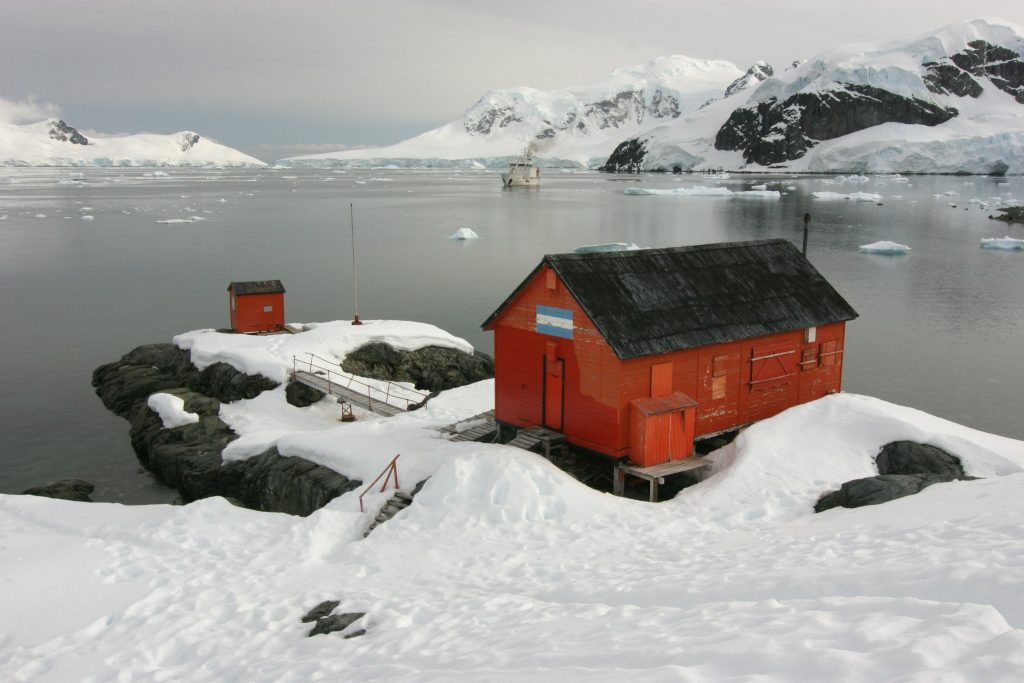 Antarctica isn’t only the coldest of all continents but also the driest. That’s hard to fathom considering there are millions of cubic kilometres of ice on the continent, but that ice is made up of snowfalls over many thousands of years. The truth is that away from the coast, the sky is nearly always clear and it hardly ever snows, the result of a huge high-pressure system sitting permanently over the Antarctic interior. At Dome Argus, annual average precipitation (in the form of ice crystals) is about 20 millimetres.

Over most of Antarctica, a typical daily weather report will be something like “very cold with clear skies (sunny in the summer, starry in the winter) and a persistent light southerly breeze”. That breeze isn’t always southerly – it actually comes from higher points, beginning in places like Dome Argus and descending down the slopes of the ice dome, slowly at first and gathering speed as the slope increases. It’s a wind driven by gravity, which is called a katabatic.

By the time a katabatic wind nears the Antarctic coast, where the slope of the ice sheet is steepest, it’s no longer a gentle breeze. With its path unbroken by landmass, and concentrated by a landform variation such as an ice depression or a glacier valley, the wind can reach astonishing speeds. At Cape Denison in East Antarctica (about due south of Tasmania), monthly average winds can reach over 90 km/h, with peak gusts over 300 km/h, making this one of the windiest places in the world.

Accompanying most katabatics is a blizzard, in which snow picked up by the wind and blown horizontally through the air makes it impossible at ground level to see any but the closest features, and sometimes no further than the length of an arm. Such katabatic blizzards are confined to the land surface. A few metres up, the air is eerily clear. 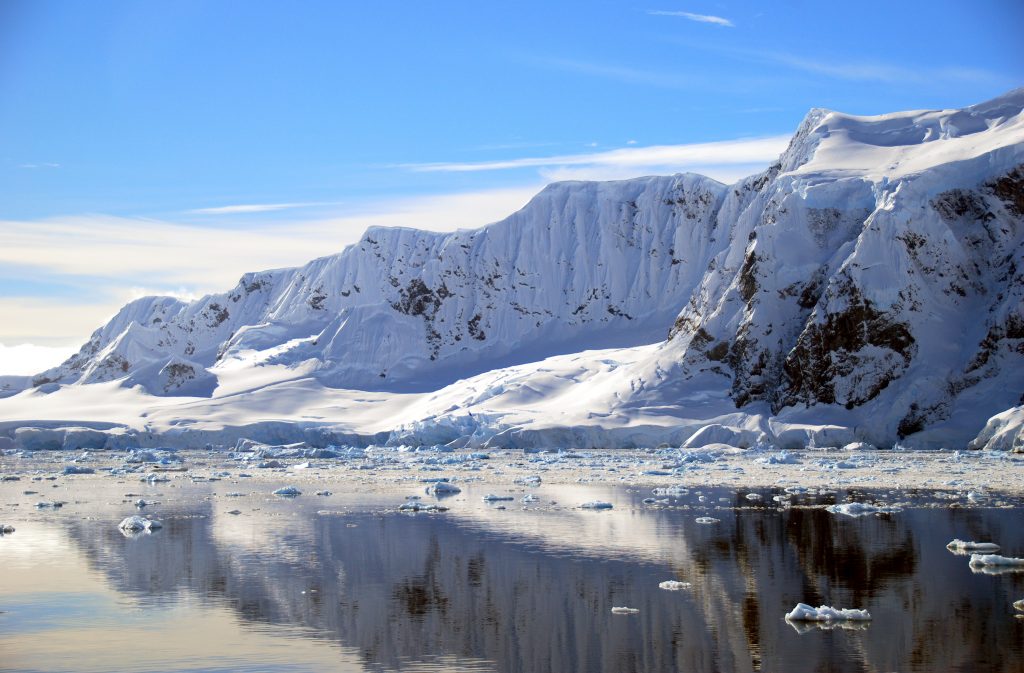 The Weather in Antarctica tends to be much milder at the coast than inland, with a typical maximum around minus 10°C, but when a katabatic is blowing it doesn’t feel it. The reason for this is wind chill: the faster the katabatic, the colder you feel. The wind blows away any insulating air close to your body and your body compensates by encouraging you to add clothes and eat hot food, all of which makes the air seem colder than it is. Wind chill is a big factor in frostbite, which happens when the body reacts to cold by withdrawing blood supply from tissues, starting with extremities like noses, fingers and toes. That’s why it’s so imperative that your Antarctica packing lists include insulated and warm beanies, gloves and scarf.

Sometimes, in coastal parts during high summer (January and February) the temperature can get above freezing point. When that happens, falling snow becomes rain, ice overhangs begin to drip and form icicles and hard ice becomes flowing water, transforming the landscape. In extreme cases, water can be seen gushing from coastal ice cliffs. With the ongoing threat of global warming, we can expect such melting events to happen more often and last longer.

The first thing to say about the weather in Antarctica, and especially in coastal areas, is that it’s incredibly unpredictable. A clear, calm day can suddenly change to falling and blowing snow, with low visibility and a high wind chill factor. This stems largely from the circumpolar trough, a belt of low-pressure systems surrounding Antarctica which can interact with katabatic winds to produce howling gales. Offshore storms present a significant hazard to shipping.

It’s not just windier around the coast but also cloudier and there’s an increase of moisture in the air. While average precipitation over the whole continent is around 150 mm (water equivalent) a year, near the coast it’s more like 250 mm. In some coastal areas, snow can rapidly accumulate, so that buildings can be completely covered in snow in a single season. At one place on the coast of West Antarctica, average precipitation has been measured at over 1000 mm a year. 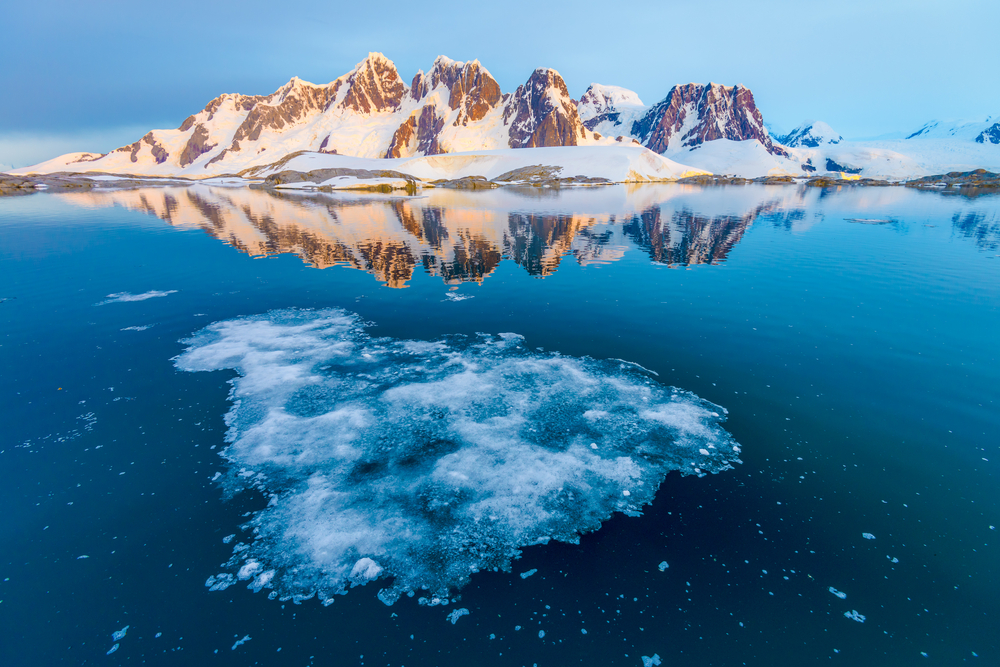 The Antarctic Peninsula, the finger of land that reaches toward South America, is the mildest part of Antarctica, not so much because it’s the continent’s most northerly point (although that helps) but due to the influence of the sea along its long coastline. Relatively warm ocean waters make for unstable sea ice, glacier tongues and ice shelves up and down the peninsula’s west and east coasts.

The east coast of the Antarctic Peninsula is cold, with summer temperatures mostly below freezing and winter getting as cold as minus-25°C, with precipitation rarely above 150 mm a year. But along the peninsula’s warmer west coast, temperatures average above freezing point through summer, and rarely get below minus-10°C in winter. Precipitation averages about 400 mm a year, much of which falls as rain over summer.

Your Antarctic experience will be distinctly different depending on which expedition you choose to join. Head to the Antarctic Peninsula from Ushuaia and you’ll be in the warmest part of the continent whilst, if you opt for an Antarctic expedition from Australia/New Zealand, you’ll experience life in East Antarctica, a comparatively colder and more remote region. Yes, you’ll face colder temps but you’ll also reap the benefits of the cold, in the form of much bigger and more fantastical icebergs.

Things are changing more rapidly on the peninsula than elsewhere in Antarctica. The rate of ice loss from glaciers and ice shelves is steadily increasing, with many ice shelves partially lost or vanished altogether over the past 50 years, changing the shape of the coastline along both west and east coasts. At the same time, many ice shelves have lost volume from their underside from coming into contact with warmer ocean water.

The islands scattered around Antarctica are, on the whole, milder in temperature but not so mild when it comes to wind, snow and rain. Like the Antarctic Peninsula, coastal islands don’t get much warmer than 1°C in summer or cooler than minus 10°C in winter, although Peter I and Alexander Islands, among others, get colder because of the fast ice that usually surrounds them.

Southern oceanic islands such as South Georgia, Kerguelen, Macquarie and Campbell Islands are characterised by cool summers and cooler winters (cold but not as cold as Antarctica), with a much smaller temperature variation from summer to winter – only about 3°C above or below freezing point. They frequently experience rain in summer, snow in winter and strong winds all year round.

Special Effects – Why Antarctica is a photographer’s dream 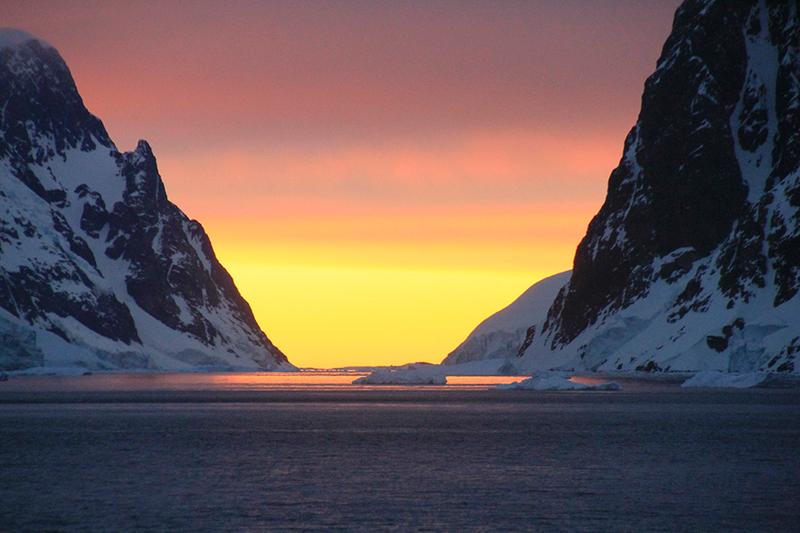 A few other things besides cold set Antarctic weather apart. Weather phenomena like ice-blink and polar mirages, nacreous clouds, and various forms of solar halos are a big part of what makes Antarctica special.

Ice-blink is a sign to mariners that there is ice ahead. It’s a white light seen above a sea horizon, sometimes reflected from low clouds, indicating ice beyond the horizon.
Mirages happen when a cooler layer of air sits atop a warmer one, causing light refraction so that objects on the horizon seem to be floating above the surface rather than resting on it. They can be seen in several forms in polar regions, including Fata Morgana, a distorting, often rapidly-changing mirage seen in winter, or in spring when sea-ice has recently broken up.

The Nova Zemlya effect shows a sunrise before it happens, sometimes with a “green flash” – a result of especially large inversion layers stretching over the horizon for hundreds of kilometres. Polar stratospheric clouds (also called nacreous or mother-of-pearl clouds because of their unique colouring) form in the stratosphere during winter, around 20,000 metres up, and can be seen most clearly in the twilight, just after sunset. For all their beauty, they are also a sign of ozone depletion occurring because of the chemical reactions that occur in their presence. Another cloud formed even higher in the atmosphere is a noctilucent cloud. This summer-time phenomenon cannot be seen in daylight, so it’s best observed during a twilight north of the Antarctic Circle, where there is some darkness in summer.

Solar halos, solar pillars, sun dogs: All these are the result of light from the sun interacting with ice crystals in the atmosphere and resulting in a wide variety of white and coloured rings, arcs, pillars and spots in the sky. The circular halo is the most common. Other forms include solar pillars, which appears as vertical columns of light rising from the sun near sunset or sunrise, and sun dogs (or parhelia), where a pair of bright spots appear either side on the sun, often together with a circular halo around the sun. All these phenomena are best seen when the sun is close to the horizon and the reason early or late-season Antarctic expeditions usually experience the most spectacular and photographic scenery of all.

The weather in Antarctica is the prime concern for those planning a trip to the far south of our planet yet, in actual fact, it’s the prime reason the continent is so incredibly picturesque. Moreover, we’d all better hope Antarctica stays cold – a total ice-melt down here would cause a catastrophic rise in global sea levels of up to 60 metres.

Worried about the weather in Antarctica? Don’t be! Check out these amazing facts about Antarctica to build-up anticipation and come explore this incredible icy wonderland. See our collection of Antarctic Expeditions and contact us to know more.

Sail through the heart of the Antarctic Peninsula into an enchanting polar desert, a final frontier surrounded by awe-inspiring icebergs.