One of the busiest aviation hubs in all of South America, Rio de Janeiro’s International Airport connects Brazil, and the entire continent, with international travellers from every corner of the globe. Located only 20km north from downtown Rio and its fabulous beaches, and set on its own island connected via road to the mainland, the Galeão International Airport, also known as Antonio Carlos Jobim Airport (after the famous Brazilian artist who wrote Girl from Ipanema) is just a half hour’s drive from Downtown Rio and the uber-famous seaside strip home to Copacabana and Ipanema beaches. 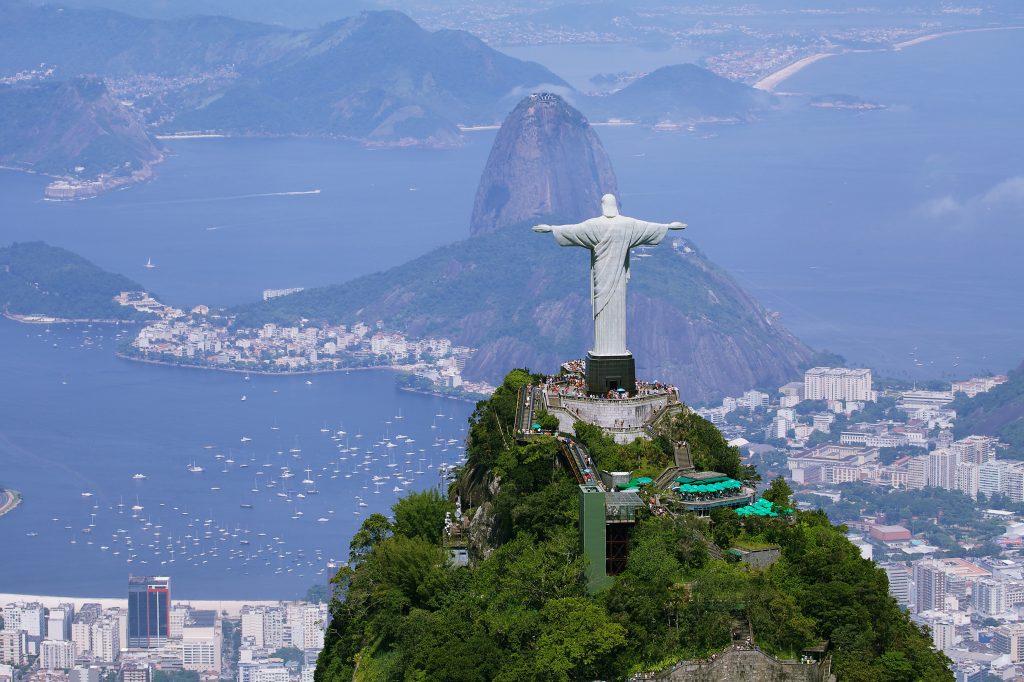 You’ll find a manned info desk immediately outside the ground-floor arrivals’ hall of Terminal 1 and Terminal 2, with brand-new Welcome Centre boasting staff who speak multiple languages. You’ll find desks on the 1st and 2nd floors of T1, and 1st and 3rd floors of T2. Desks are operational from 6am until midnight. You’ll also find computerized info screens at all of these locations.

Depending on what time of day or night you arrive at Rio International Airport, transfer times can vary. Expect it to take between half an hour and an hour to reach your hotel, with only marginal differences between Copacabana (which is closer) and Downtown, which is further away but accessible via a separate highway. There are various ways to get to and from the airport to downtown Rio and its southern beaches, the most convenient by far being a private transfer which can be made budget friendly with the help of rideshare app deals which are easily available to everyone on their site. Safe, reliable and hassle-free, a pre-booked private transfer takes the worry out of your initial Brazil impressions.

Shuttle-van transfers can be booked in advance and although just as safe and reliable as private transfers, transfers take longer due to the multiple stops needed to drop off all passengers on board. With this option, you have the choice of a Green Path Transfer, a new initiative aimed at reducing your carbon footprint by using low-emission vehicles, and Shuttle Rio, which depart every hour on the hour, servicing the beaches area, Zona Sul.

Taxi services are abundant and can be booked upon arrival, although we strongly recommend you book your taxi from the ‘radio booths’ you’ll find just outside customs, rather than fight the offer onslaught curbside. For only a few extra reals, you’ll be guaranteed an official taxi working for a reputable company, and you’ll be escorted straight to your transfer taxi.

Rental cars are naturally offered at Rio’s International Airport, but driving around and through Rio should only be attempted by those with steel nerves, a healthy dose of divine belief and plenty of local driving experience. Perhaps not the best way to start your Rio de Janeiro adventure!

The airport also offers quite a few bus services and a subway to Zona Sul and Downtown, although rides can be painfully long, slow and only marginally cheaper than van transfers, so they tend to be used by the frugal of backpackers only. 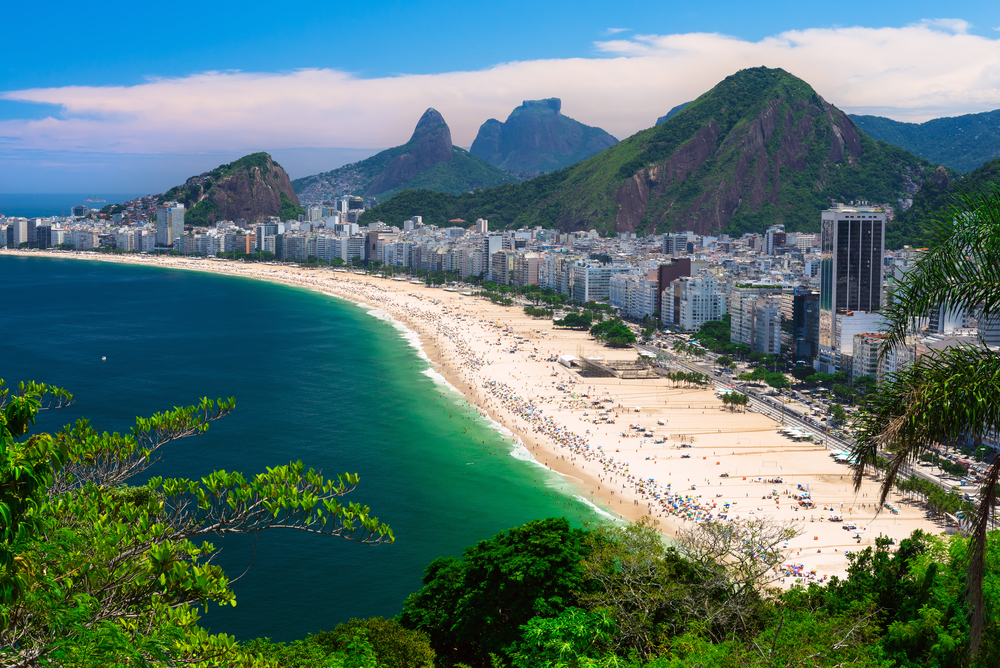 Being the transfer hub that it is, Rio International Airport offers a plethora of connecting flights to other destinations within Brazil and beyond, yet transfer times can be considerable, hence the reason many visitors decide to spend a few days exploring Rio before moving onwards. Upon arrival on an international flight – and as a non-Brazilian citizen – you’ll have to clear customs, collect your bags, locate your connecting airline desk, check in and transfer to your connecting flight. All this can take upwards of 2 hours so do keep this in mind when booking flights.

The Rio international Airport boasts three hotels in its absolute vicinity, ideal for those who need a rest and respite in between flights. These are the Linx Hotel International Airport Galeão (adjacent to the airport and offering free shuttles every 20 minutes) Aerotel Airport Transit Hotel (airside on Level 3 South Pier of the international terminal) Rio Aeroporto Hotel (Luxor) landside, also on Level 3. Many more hotels are found within a 10-15 minute drive from the airport although if you’re looking for premium convenience one of the three airport hotels should suffice.

Foreign currency can be exchanged for local Brazilian Real (R$) at one of six currency exchange bureaus at the airport. There are four in Terminal 1 and two on the second floor of in Terminal 2. The Real is quite a strong currency and, at time of writing, 1AUD will buy you 2.5R$, whilst 1USD equates 3.3R$.

A comprehensive Medical Centre and pharmacy operates 24 hours a day. Both are located in Terminal 1. 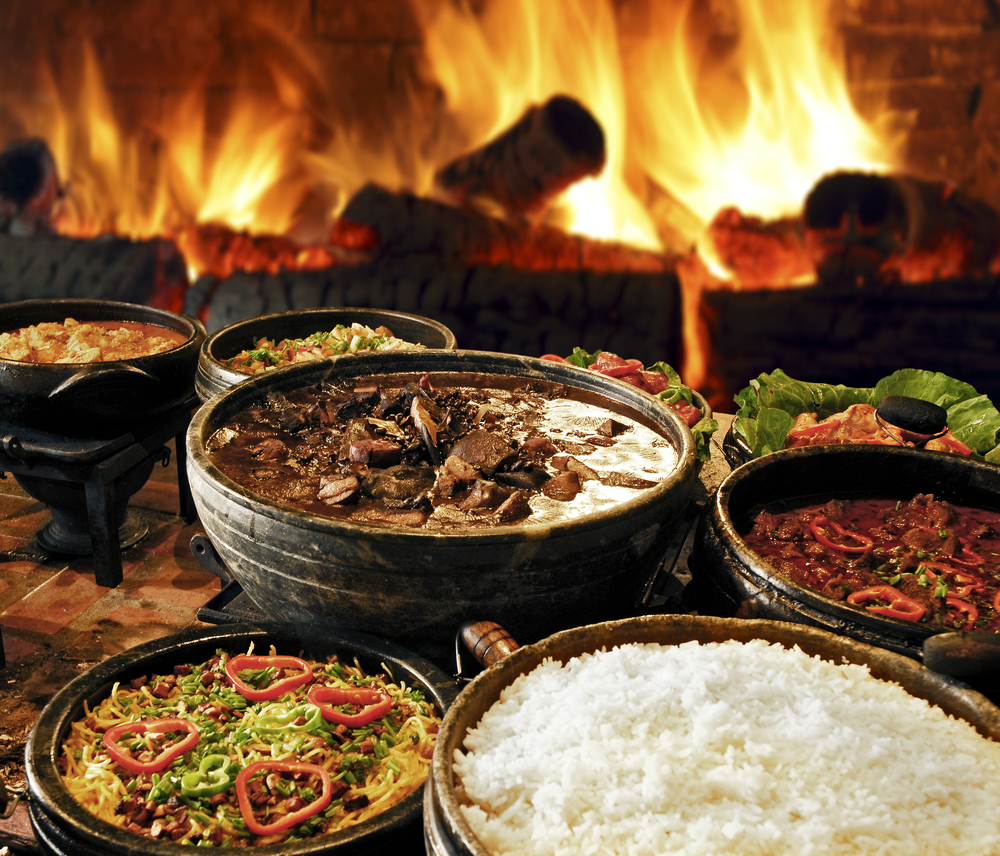 Brazilian cuisine is renowned for being exceptionally tasty and incredibly varied, although the moment you spot the Starbucks at the airport you may well gather that this is not exactly gourmet central. Nevertheless, you won’t risk going hungry at Rio’s International Airport, which offers 24-hr food options on both air and landside of both terminals. Guests have mentioned that the fare on offer at the Luxor Hotel is quite good, so if you have extra time it may be worth a look.

The international airport in Rio is home to quite a few quality lounges, many of which can be accessed by purchasing a lounge pass or via membership programmes. Members of Star Alliance can luxuriate in the brand new 24-hour lounge which has opened in in the International Departures area.

Download the LoungeBuddy app to locate Rio’s airport lounges and pre-book your passes.

Here they the lounges at a glance: 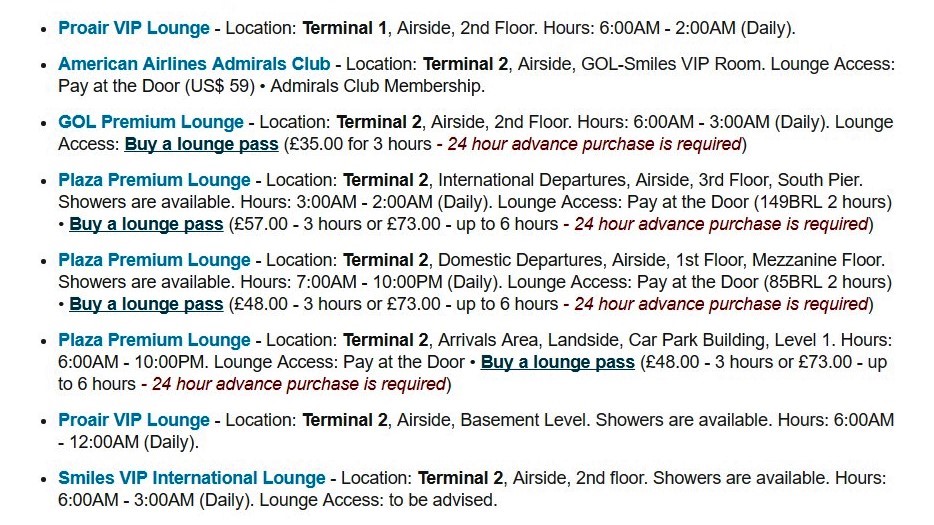 At Rio International Airport, you can access free WiFi for 60 minutes, by connecting to the “RIO GALEAO” network

ATMs dispensing cash are found in the Food Court of the 3rd Floor of T1, and the 2nd floor of T2, both landside and airside.

Luggage storage services by Malex do Brasil are found on the ground floor of T2 (between sections D and E) and are accessible 24 hours a day.

If you haven’t had your shopping fill whilst travelling through Brazil you can make your last-minute duty-free shopping at the airport, with several Dufry outlets open 24 hours. You’ll find these on all three floors of T2, and more shopping options in T1 including plenty of souvenir stores, a Havaiana shop on the 3rd floor of T2, an excellent chocolate shop inside the departures area, as well as plenty of internationally branded boutiques.

Rio’s International Airport is a world-class aviation hub and undoubtedly a convenient springboard for Brazilian adventures. A highlight of its own accord and a splendid stop-over hub, Rio is one of the most vibrant and rewarding cities you could ever visit. But wait, there’s so much more! Want to discover where else you can to, from here? Then check out our comprehensive Brazil tour page and contact us for more info.