The wildlife of the Galapagos reign supreme in the Ultimate South America’s Bucket-list. Discover all the incredible, comical and awe-inspiring creatures that make this such an unparalleled nature lover’s destination.

Not just a spectacular wildlife destination in Latin America, but an absolute natural treasure for the whole planet, the Galapagos are a cluster of volcanic islands brimming with a host of unique wildlife. If you’re an animal lover, there really isn’t a better place to visit, anywhere on earth. That’s because when you visit the Galapagos, just off the west coast of Ecuador, you won’t just view the incredible animals that live here. But you’ll walk among them, swim with them and step right over them. Seals, sea lions, turtles, iguanas, cormorants, blue-footed boobies…they are everywhere. And they’re not the least bit afraid of you, making them an immensely rewarding South American highlight.

Meet the Wildlife of the Galapagos! 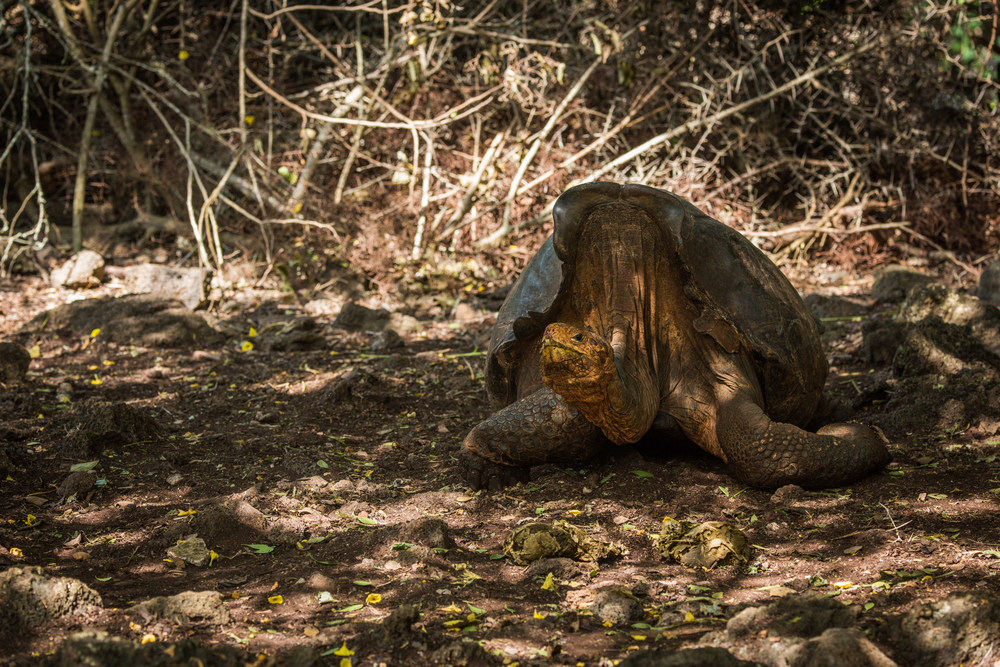 The creature from whom the islands get their name, the Galapagos Giant Tortoise (galapago meaning ‘tortoise’ in ancient Spanish) is by far the most iconic of all the wildlife here. They are the largest of their kind on the planet, can weigh up to 250kgs and boast a life expectancy of up to 150 years. What is intriguing about these tortoises is that they each evolved as differing species on individual islands, making them unique and incompatible with one another. Only 11 species remain, out of a presumed 15 when Charles Darwin famously visited. Conservation projects are very prominent and, for the most part, very successful.

Heard about Diego lately? He is the centenarian stud-muffin who single-handedly regenerated his entire species on Espanola Island. Over the course of 40 years, he has fathered over 800 offspring and brought his species (chelonoidis hoodensis) back from the brink of extinction with his sexploits.

Here’s a centrefold pic of ‘Super Diego’. Taken from his sexy side, obviously. 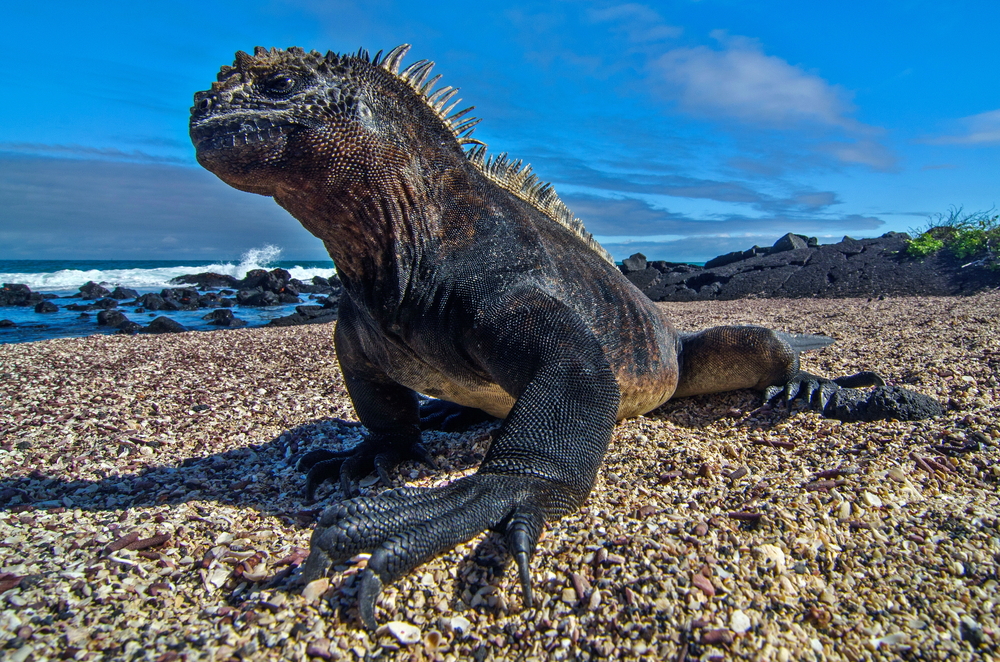 The punks of the wildlife brood don’t much care for the classically handsome looks of the tortoises, preferring to showcase their Blue Steel stares instead. The Galapagos Marine Iguana is the only one of its kind left in the world and has evolved to feed on seaweed, given the lack of suitable on-shore culinary options. The iguana’s super neat trick? It can filter salt water through its nasal glands and expel the excess salt from its nostrils! You’ll see an abundance of these fearless-looking creatures, both in and out of the water, yet they mostly congregate on the western islands since colder waters are optimal for the kind of seaweed they feast on. 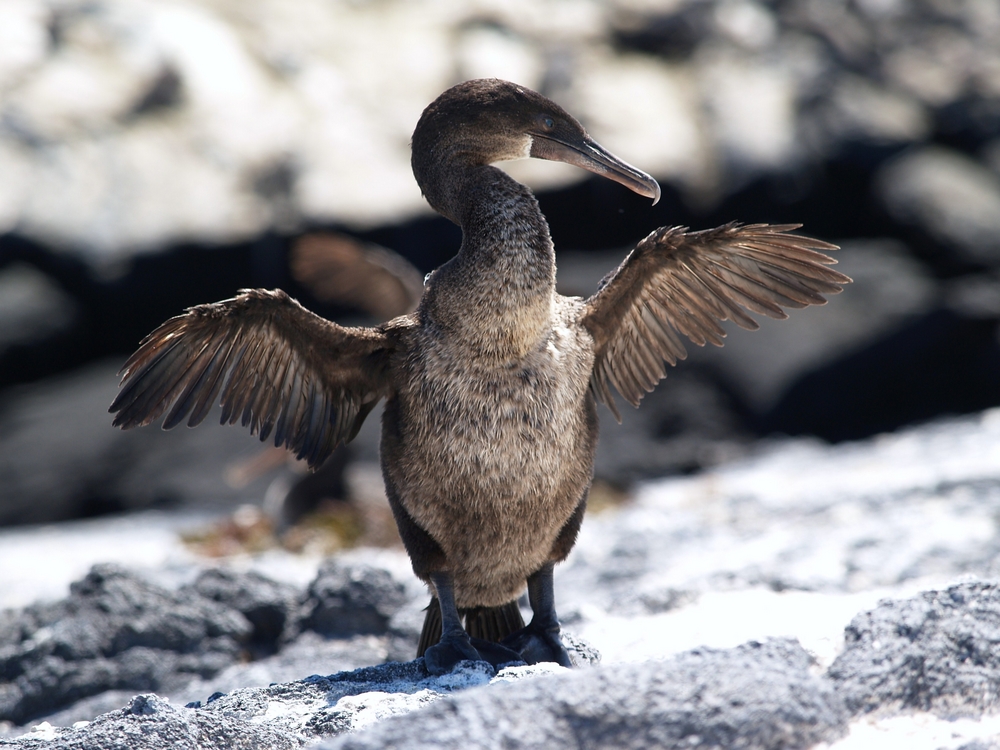 A rare and unusual cormorant, in that it cannot fly, the Flightless Cormorant is yet again another endemic Galapagos animal not found anywhere else. Over time, it has evolved to be the heaviest of its kind and is highly endangered as it is easy prey for introduced predators such as pigs and dogs. Less than 1500 of these beautiful birds are left, yet conservation projects work in earnest to protect its survival in the Galapagos. 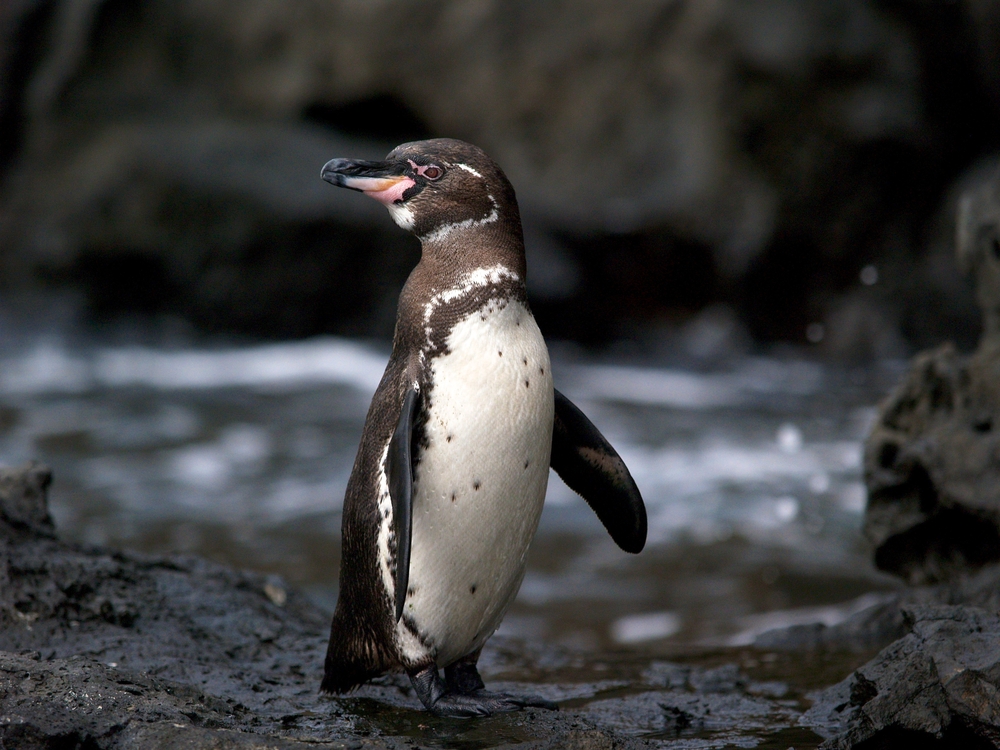 These cute little fellas are the only penguin species to live north of the equator and are also one of the smallest of their kind, weighing in at an average of just 2kgs. The Galapagos Penguin can survive this close to the equator because even though daytime temperatures are high, night-time coolness and the distinctive chill in the sea helps them keep cool. You may see them waddling about with their flippers over their feet. Experts believe this is what prevents their feet from getting sunburnt. 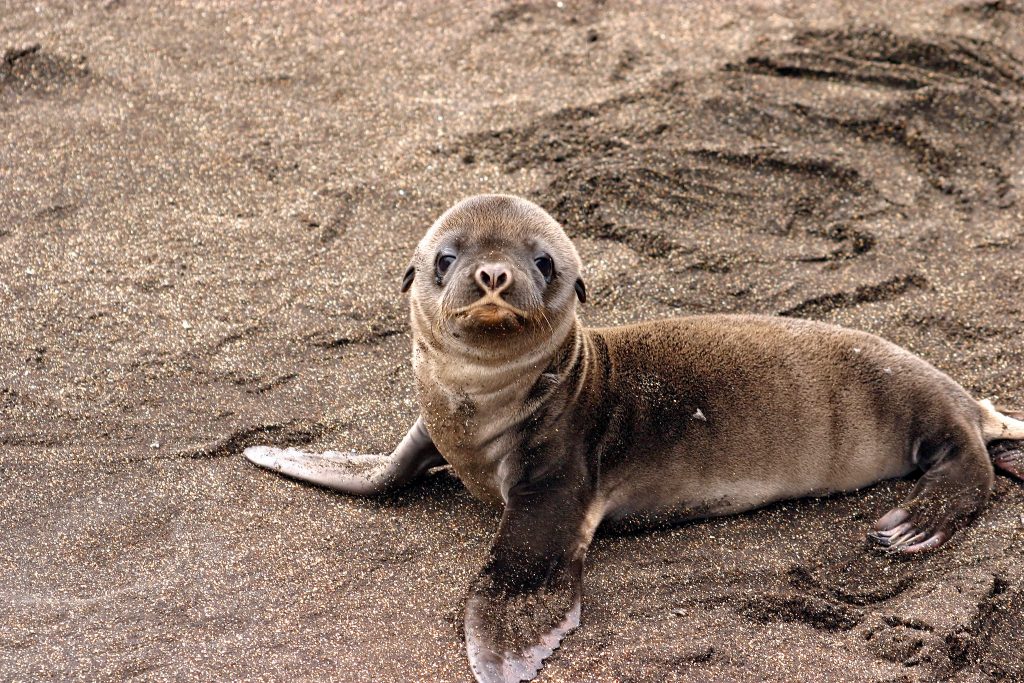 Often regarded as the “the clowns” of the group of Wildlife of the Galapagos, the sea lion emits a bark that is one of the most recognizable animal calls on these islands. Charming, noisy, lazy and curious, the sea lion – along with the fur seal – is undoubtedly the most adorable creature of the Galapagos. Their big round googly eyes make them irresistibly cute, that’s for sure, yet their actual purpose is to help it detect sharks when swimming in the dark waters around the Galapagos Islands. The sea lion pups are nursed and nurtured by mum (actually called a ‘cow’) for up to three years, and sea lion ‘crèches’ – where one cow looks after multiple pups as other adult females hunt – are a common sight here. Frolicking in the waves with sea lion pups rates as one of the many unforgettable highlights of a Galapagos cruise.

The funny bird with the funny name is one of the most distinctive on the islands and boasts an equally distinctive mating dance, which makes them all the most entertaining to watch. Unlike other wildlife of the Galapagos, the Blue-footed Booby is not unique to these islands, although more than half of the world’s population chooses this archipelago to breed. An interesting tidbit of info: the female Blue Footed Booby doesn’t make a nest for her eggs. Instead, she lays them on bare ground and proceeds to defecate right on top of it, effectively encapsulating the egg in a pod of warm and supposedly cosy poo. 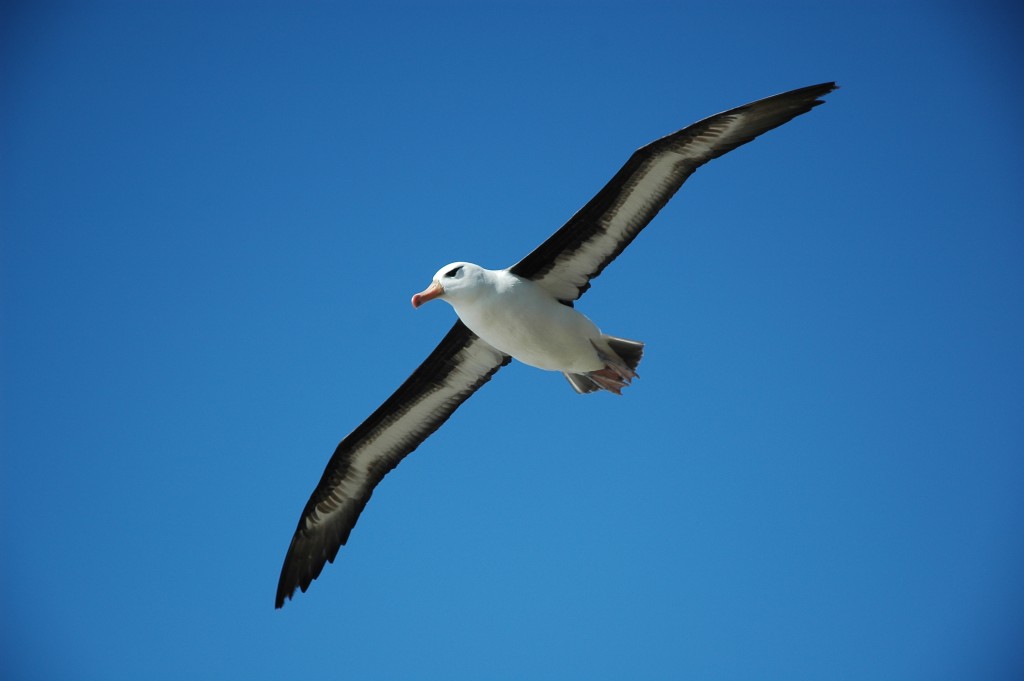 If there’s an animal whose mating ritual can beat that of the blue-footed booby, in endearing value alone, it would have to be the waved albatross. The kissing and beak-clicking ritual most resembling a comical round of aviary fencing. The mating ritual is as important as it is mesmerizing to watch: the waved albatross mates for life and, no matter how far and wide it roams, it will always return to the Galapagos to breed. 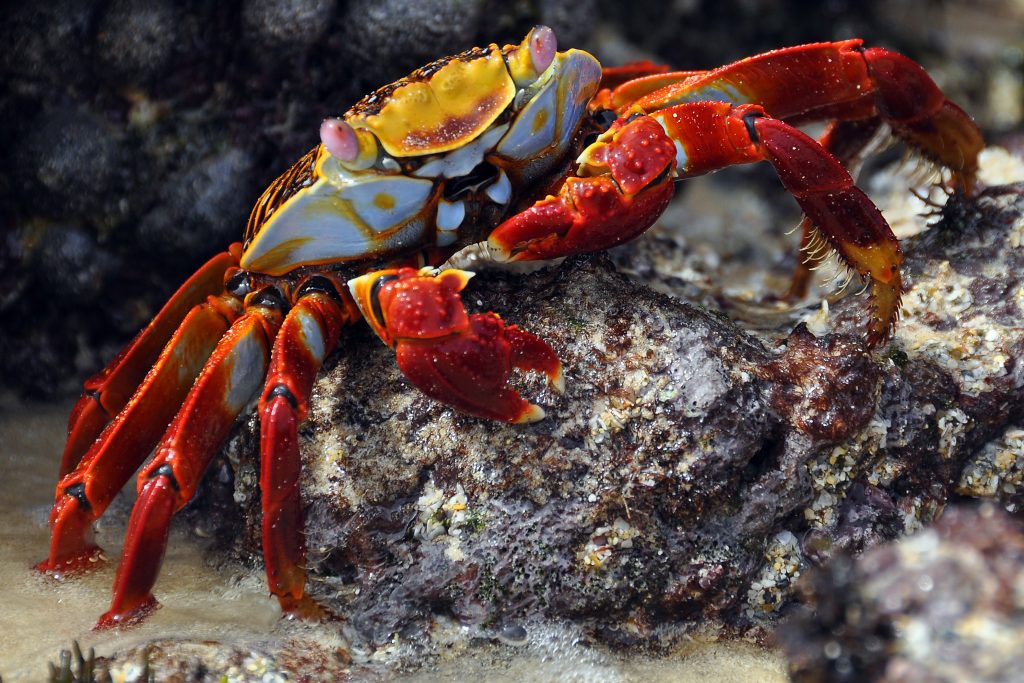 This vibrantly coloured crab is not endemic to the Galapagos and can actually be found along the western coastline of both North and South America. But what it displays on the Galapagos is an incredibly unique characteristic. Its main hobby is to clean ticks off the backs of marine iguanas! Thanks to their bright hues, Sally Lightfoot Crabs are easily spotted and make for some of the best photographs as they contrast beautifully against the dramatic black rocky surface of the volcanic islands. You’ll see them scurrying along rocks in search of food and climbing up wooden poles in port-towns.

The most famous and loved wildlife of the Galapagos is only the tip of the iceberg when it comes to Galapagos cruises. Along with the above revered creatures, you’ll see hundreds of different bird and reptile species, all unique in their own way and all combining to make this the most incredible destination for anyone who wants to immerse themselves in pristine nature.

Read our cruise or island stay guide to get an idea of what a visit to the Galapagos is all about, and ask us about the best Galapagos cruises and tailor-made tours we have on offer. Click here for more information.